First, it has the capability of much higher current trip points, i.e. the trip current is the point where the autoreverser decides that the load is not a train, but a short circuit (meaning that the unit should reverse the rail polarity).

Many autoreversers would trip at 4 or so amps. Running just a single USAT F unit, I set this system to 8 amps to eliminate false tripping. I'm still checking it out, but you can set the unit up to 19 amps!

It also has a detection system that can tell the difference between high inrush currents found in sound decoders, and a true short circuit.

The PSX comes in several flavors, with the base unit that just does autoreversing and short circuit detection, and units that can control stall and solenoid switch machines, have a photocell as an input detector, etc.

One thing that they list in the documentation is that you can fit this into a Radio Shack project box, #270-1805. Well that is true, but it sits in the top of the box where the lid would be. I milled the 4 supports inside and there are some small supporting ribs. I milled this flush with the box sides, about an inch into the box. The result is that the circuit board fits down nicely into the box.

I suggest labeling the input and output terminals so as not to hook it up backwards. Likewise, I made a label indicating the positions of J3, the programming jumper. Note: after programming, wait 1 minute until applying power again (Strange).

Putting it in a box

Good idea! I bought the specified Radio Shack box, number 270-1805. The problem is that the board will just sit on top of the box, so you cannot put the top back on. You need to mill out the supports inside to let the board sit down in it. I took a 1/4" router bit and milled out the 4 corner posts, and all the little "ribs" on the sides to a depth of 1.15". You will probably have to get a Dremel tool with a sanding drum to smooth out the inside flush.

Now there is room for the 2 transformers underneath to clear, and plenty of room above the board for the heat sinks and a lid.

You will need to round off the corners of the board to a larger radius, and sand off the little "nubs" on the short edges of the board. It will now fit down inside nicely. Drill a hole in each end to get the input and output wires to the connectors. (This one is not mine, R.J. just had to show off and buy the unit with the switch machine controller built in, thus the extra screw terminals) 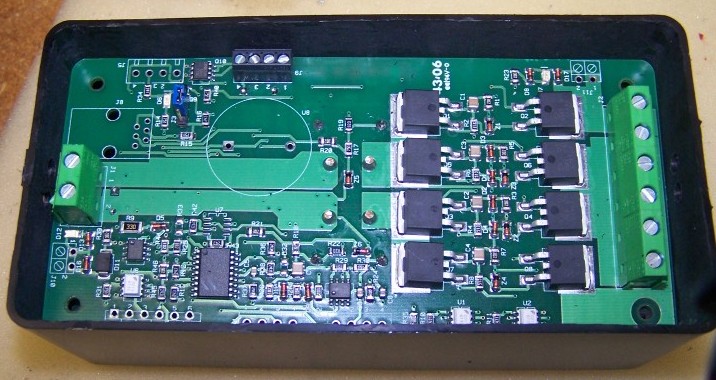 First, I bought the sonalert alarm "buzzer" they mention in the documentation just for the heck of it. The Digi-Key part number specified was good, but the minimum order is 500 pieces!. Well, I found them at Allied electronics. Manufacturer Motorola MSR320R, Allied number 854-0084, $4.62 each.

The board has no markings as to the polarity to connect it. The pads where it will solder are different shapes, one round, one square (viewed from the board top). The square pad is the plus, and the round pad the minus.

DCC Specialties states that you need heat sinks on the two rows of 4 output transistors if you run over 8 amps.

Well, I went over that setting the first day with just 2 USAT F3's. Seems the current spikes shut the unit down.

To attach the heat sinks to the transistors, you need a thermally conductive compound. You could use thermal epoxy.

DCC Specialites recommends getting Digikey #BER158-ND two sided .005" thick thermal tape. Well this comes on a 10" square sheet for $41 !!, and to top it off, is no longer stocked at Digi-Key.

I found an alternative at www.sidewindercomputers.com, it's Chomerics Thermattach T412. This is absolutely the best stuff around, albeit expensive. It was $19 for a a sheet about 5x7. You only need a fraction of this. You can find other thermal tape, but since my stuff is enclosed and not fan cooled, I went for the gusto. It's some pretty sophisticated stuff, an aluminum mesh with metal in the adhesive.

The picture below shows the unit in the box, with the sonalert buzzer and the heat sinks. Note I did some labeling so I don't screw up. I marked the input and output terminals with large labels so I did not get confused. The newer boards show OUPUTS on the output end.

I also put a lable near J3 indicating programming or OP mode. J3-1 is nearest the cender of the board. Normal operating mode the jumper is between the outer 2 pins, J3-2 and J3-3. 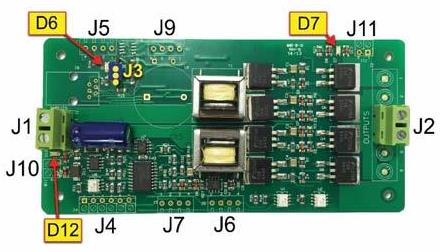 D12 is on when there is input power.

D7 is on when there is output power

D6 is the status LED:

CV 52 is power on "phase" of autoreverser output

1 = use delay before reverse, if this is on, then CV 65 sets delay time

CV 63 factory reset, setting it to 42 sets the unit to factory defaults, default value is 0

0 = off until commanded on

CV 67 inhibit flashing of block occupied when photocell is armed

Note: there are 3 default accessory addresses. (can be changed, see manual)

2043 arms the photo cell detector, if no photo cell, it turns the unit off

2044 will control position of turnout connected to PSX-AR

Just got done clearing out a strange problem. I recently modified the "WYE" that comes from the mainline to the switchyard. I had not re-instated the autoreverser for a while (because I left it's case open to rain, and blew it up).

So a few weeks ago I connected the autoreverser and it did not work... hmm... turns out that I had 3 feeders unlabelled, and the one I thought was the switchyard was not. OK, now all labelled... Now it sort of works but usually the loco stops, the autoreverser indicated a short, and then after 2 seconds (internal timer) cleared and resumed... weird.

So today was the day to figure it out. Changed the trip current on the autoreverser, but that did not seem to make much sense, because it is supposed to reverse lightning fast, and also has a circuit breaker, so it was by appearances tripping the breaker, but after reset it was reversed.

Hmm.... I noticed only one "leg" of the WYE was having this issue, the other leg was fine. This leg is going through a crossing, which should not have made any difference, but then a small light went on in the tiny brain, maybe the detection of the "need for autoreversing" was being detected as a short. The gears were turning but in the background.

OK, let's test the autoreverser. By leaving a meter in the rails, I can see when power is there, i.e. also a short will show zero volts. My autoreverser has the optional audible alert to hear when there is a short, vs. autoreverse.

So, I started shorting one rail on one side of the insulating joints to the other. Wait a minute, a lot of these rails in the crossing don't seem to have any effect. Get the meter, NO VOLTAGE on all the internal rails that form the "diamond"... hmm.... ok, pull the crossing and look. There are NO jumpers inside, only the outside "entry" rails have power.

So, thinking about how the autoreverser might work, if I was to program the code (it is microprocessor driven), I would look for both rails being connected backwards at pretty much the same time.... hmm... if you only "reversed" one rail, maybe that would be interpreted as a short, not the need for autoreversing, since the other rail is dead through the crossing.

Took up the crossing, and made power jumpers (with split jaw clamps) to all 4 internal rails, back in place, works flawlessly, not the smallest hiccup when autoreversing.