The "#1 Scale" centerset coupler from the Kadee 1907 kit is evaluated for installation in both Datum Precision Metal Coupler Box and 3-D printed plastic "CamPac BoxTM". Various couplers are included in the illustrations that follow. 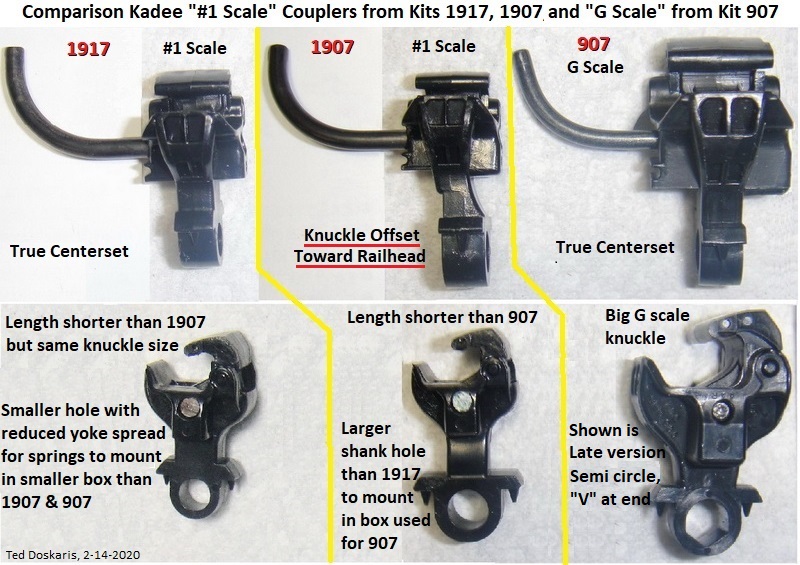 Though the coupler from the Kadee 1907 kit is the primary focus of this topic, consideration is, also, given to the Kadee 1917 kit's "#1 Scale" centerset coupler that has an extremely short shank. 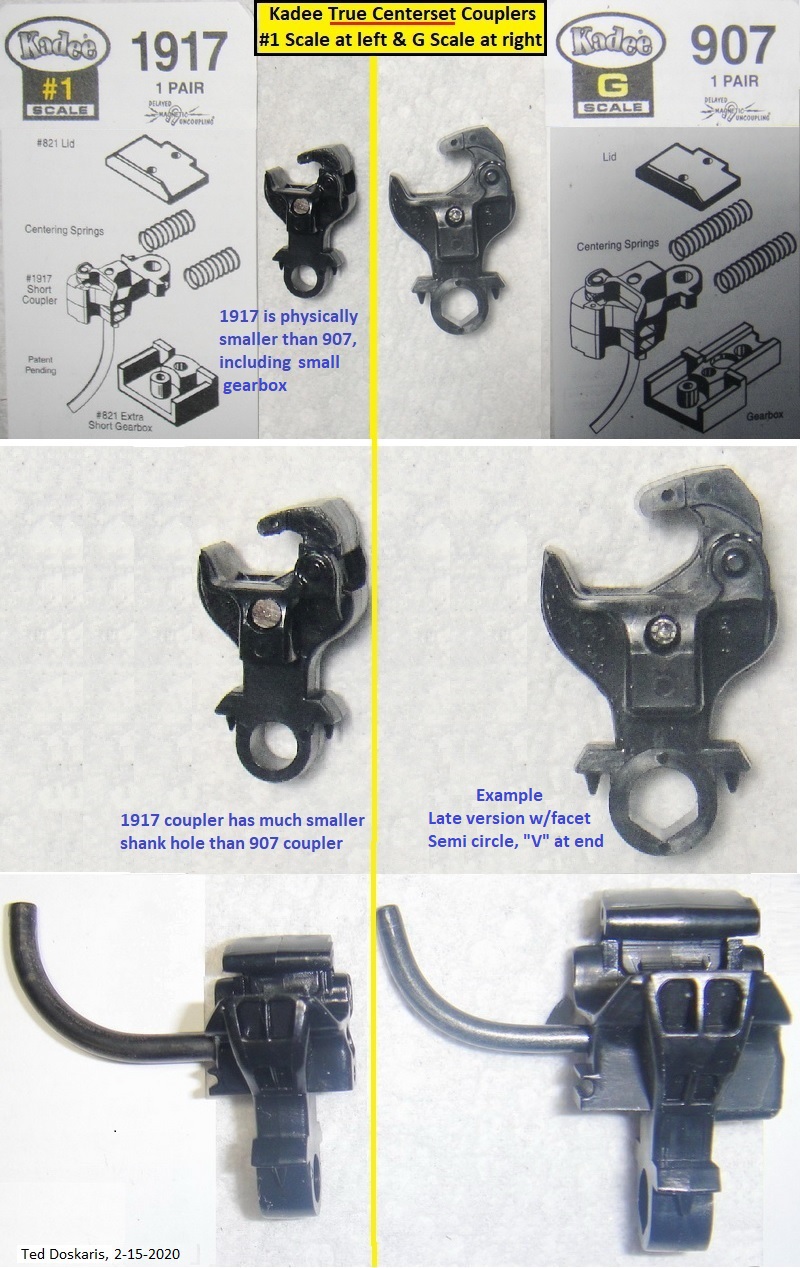 Custom coupler boxes (CNC machined from aluminum) were designed by me (Ted Doskaris) in concert with Datum Precision Company located in Grass Valley, CA. The boxes were initially made exclusively for me for my own use, but as the benefits of the boxes became known other folks sought to acquire them, too.  Limited quantities of these metal boxes are available, and they can be obtained by contacting Colin Camarillo via his website.

The boxes are meant to accept Kadee centerset "G" type couplers, plastic lids, and springs from Kadee kits such as the Kadee 789 and Kadee 907 "New Generation" assemblies, evolutionary differences of which are illustrated below. 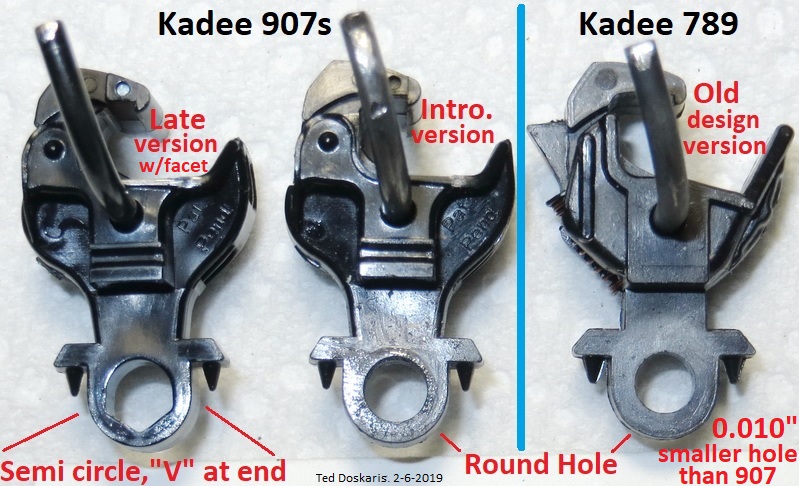 The initial intended use was for the Aristo-Craft GP40 and SD45 diesel locos - but from the onset the boxes were, also, configured for potential applications on others.

Accordingly, applications have been expanded and include the following locos:

Aristo-Craft applications listed do NOT require cutting of the loco (except RS-3 notching pilot).

Articles / vignettes about the coupler boxes and their applications are available.

USA Trains applications do require cutting of the loco (notching pilot) and include:
GP38, SD40-2

For the USAT GP38 application, see article title below.

The USA Trains GP38 and SD40-2 (along with other loco & car) coupler boxes are also available in 3-D printed plastic "CamPac BoxesTM ". These boxes are designed by me (Ted Doskaris) in concert with Colin Camarillo who has the 3-D printer and software expertise to implement them. In addition to the boxes, mounting pedestals and plugs to cover the large pilot openings typical of USA Trains locos are also included. An example GP38 is subsequently described in section, Kadees & 3-D Printed Plastic Coupler Box.

The 3-D printed boxes are obtainable by contacting Colin Camarillo via his website.

I obtained a Kadee 1907 "#1" scale coupler assembly, compared it with the Kadee 907 "G" type, and installed it into a Datum Precision metal coupler box. I then mounted it on the Aristo-Craft GP40 (in place of the coupler from the Kadee 907). The Aristo-Craft GP40 with Datum Precision coupler box is used in examples described here for 1/29 scale environment. 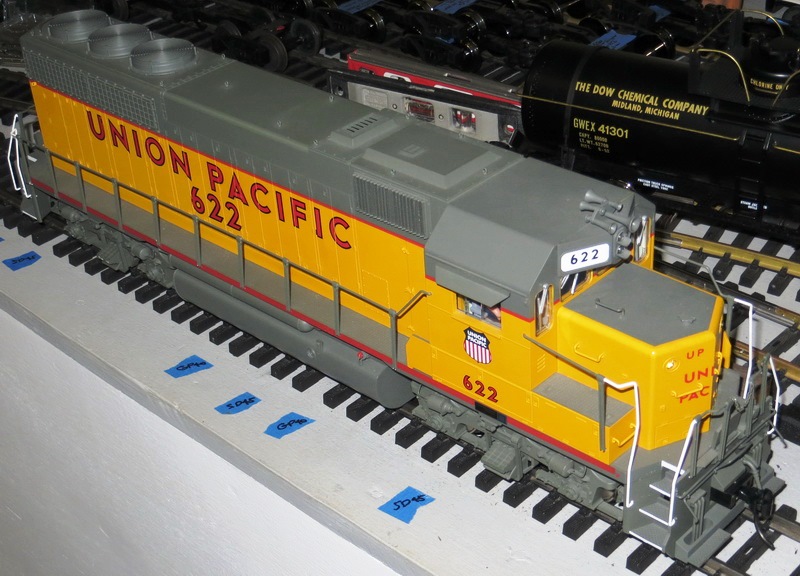 The Kadee 1907 assembly has identical plastic box, lid and springs when compared to the Kadee 907, and the coupler itself fits and operates perfectly in the Datum Precision box; however, there is more to consider than just this! Unlike the Kadee 1907, the Kadee 1917 (above) coupler appears to look like it is truly centerset! "#1917 #1-Scale Centerset Short Shank Couplers & Extra Short Gearboxes"

It's intended that the Datum Precision coupler box is to accept a Kadee centerset coupler (e.g. having no up or down offset - coupler from the Kadee 789 or 907 kits) for mounting on the Aristo-Craft GP40 and other applications.

The following pictures provide information for helping understand the significance with respect coupler height to rail head distance and the impact of coupler offset.
In this regard, drawings of a prototype loco and of the Kadee coupler height gauge are included:

These pictures and the ones to following show an Aristo GP40 with couplers from the Kadee 907s as well as the smaller 1907s for comparison sake.

The picture below is an overall view of the UP GP40 having the #1 scale coupler from the Kadee 1907 in the Datum Precision box mounted on the front of the loco. 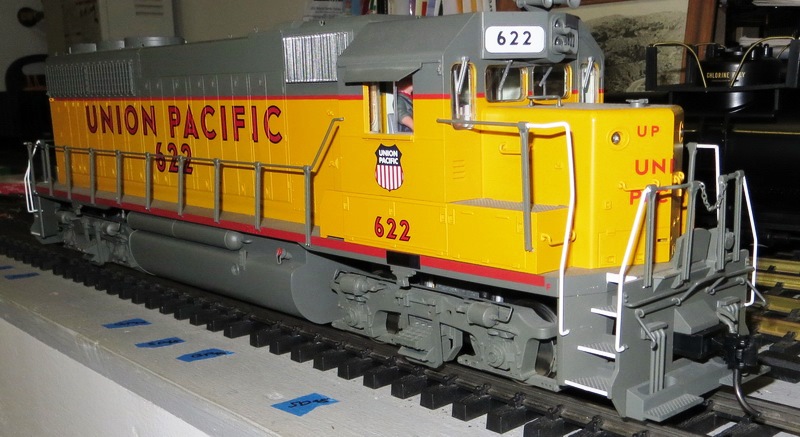 A close up of the pilot is shown below. 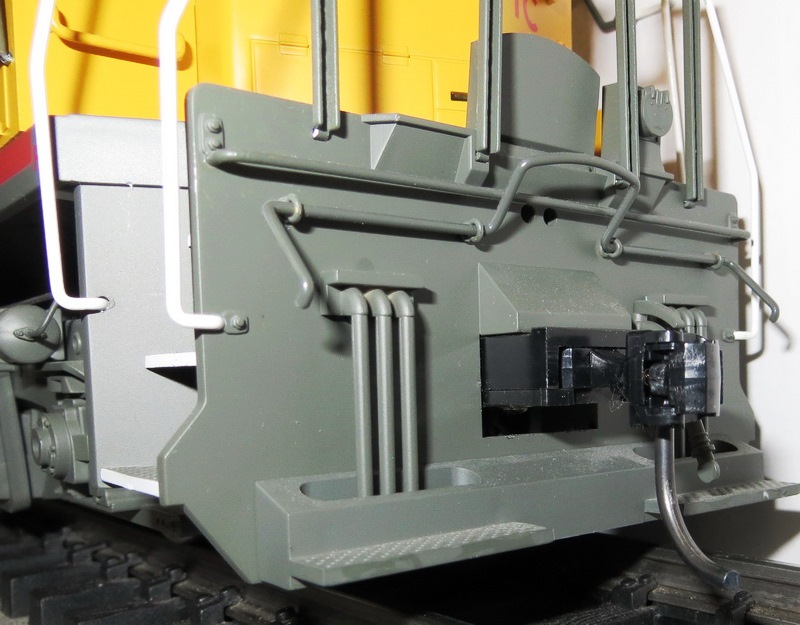 The picture below shows how the loco's installed #1 Scale coupler aligns with a Kadee 980 gauge having the noticeably larger "G" scale coupler type. (I did not obtain the "1929 Type E Coupler Height Gauge" meant to be used for the smaller 1/32 scale Kadee coupler.) 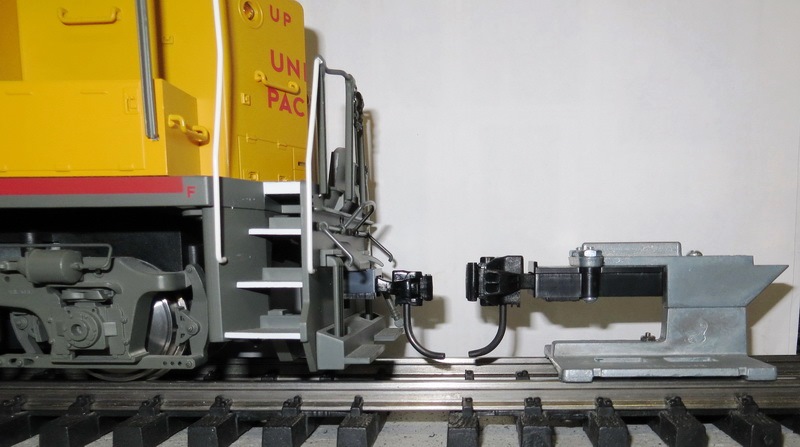 The loco (when it had the 907 mounted in the same location) and car both had been setup and verified for coupler alignment with the Kadee 980 gauge at the time couplers were installed. Shown below are pictures showing the loco with coupler from the 1907 and a tank car with the 907 coupler assembly. Thus, as expected, the horizontal centers of the couplers do not match just as they don't with the gauge.

Above is the loco equipped with the coupler from the 1907 kit coupled with 907 of tank car.

Below is the loco originally equipped with the coupler from the 907 coupled with the 907 of the same tank car.  The centers of these couplers line up.

With the loco equipped with the coupler from the 1907 having the mismatched centers, I found that they still function over the Kadee track magnet for uncoupling - though not always consistently. 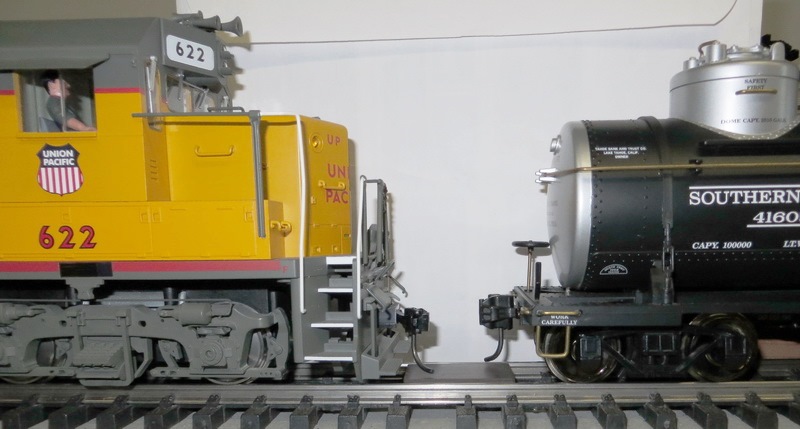 Couplers from the Kadee 907 and 1907 will be exemplified using a USA Trains GP38 equipped with the CamPac BoxTM.
When using the 1907, the shank hole needs to be enlarged to fit over the pivot post on the box. 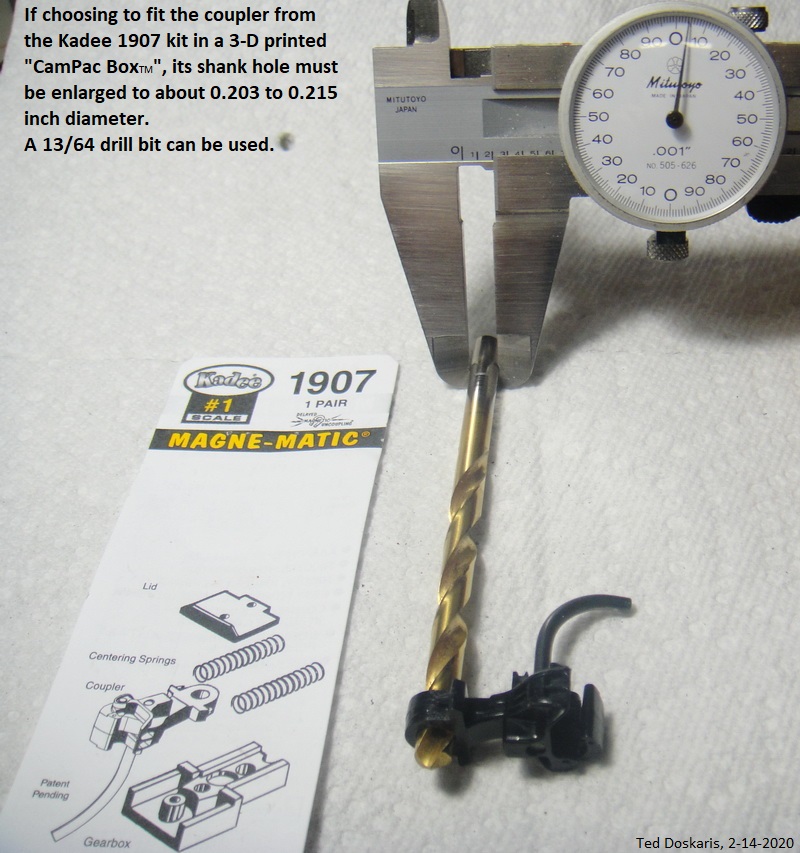 Note: It's preferable the shank hole be enlarged closer to the higher 0.215 inch diameter. 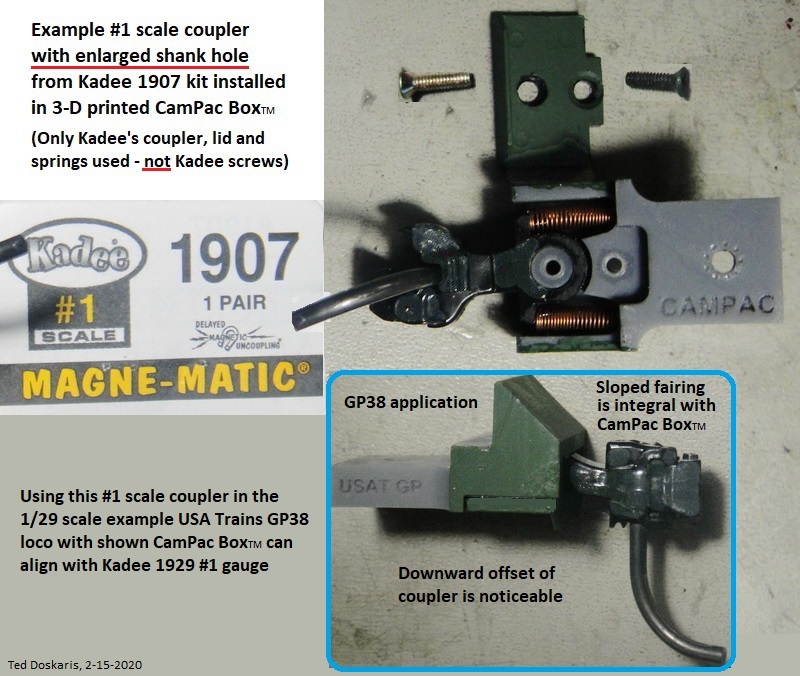 Illustrated below is a side by side comparison of the GP38 fitted with couplers from Kadee kits 907 and 1907. 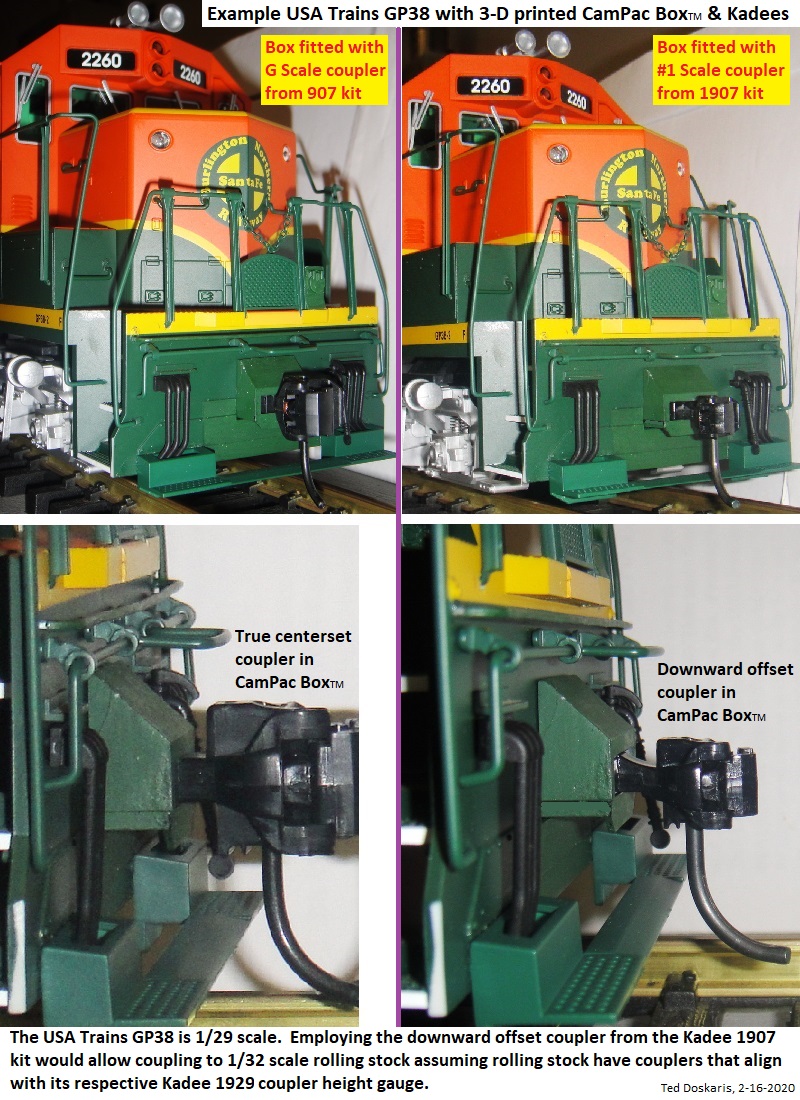 Note: Adapting the 1/29 scale loco to 1/32 scale rolling stock with the coupler from the 1907 kit is subsequently described in section,Thoughts & Comments.

The Federal Railroad Administration (FRA), Department of transportation (DOT) is codified by the Code of the Federal Register, CFR 49. It includes section 232.2 having information about coupler height.

CFR 49 section 232.2, includes the following stated requirements (expressed in terms of a drawbar) for prototype 1/1 railroad freight car coupler heights, including standard-gauge railroads in the United States that "... shall be 34 1/2 inches, and the minimum height of drawbars for freight cars on such standard-gauge railroads ... shall be 31 1/2 inches".

The Kadee 880 coupler height gauge is the predecessor to the newer Kadee 980 gauge with the newer gauge having the "new generation coupler". The specifications for both gauges are intended to be the same. For more info on the gauge, see "Kadee 880 Coupler Height Gauge Measurements Vignette"

In that vignette an example Kadee 880 gauge coupler height measured 1.115 inches from the rail head surface (or 32.33 inches if scaled up to prototype 1/1) - thus, the Kadee gauge is within the prototype allowance with respect to CFR 49, section 232.2 - it being somewhat below the center of the CFR range of 33 inches. 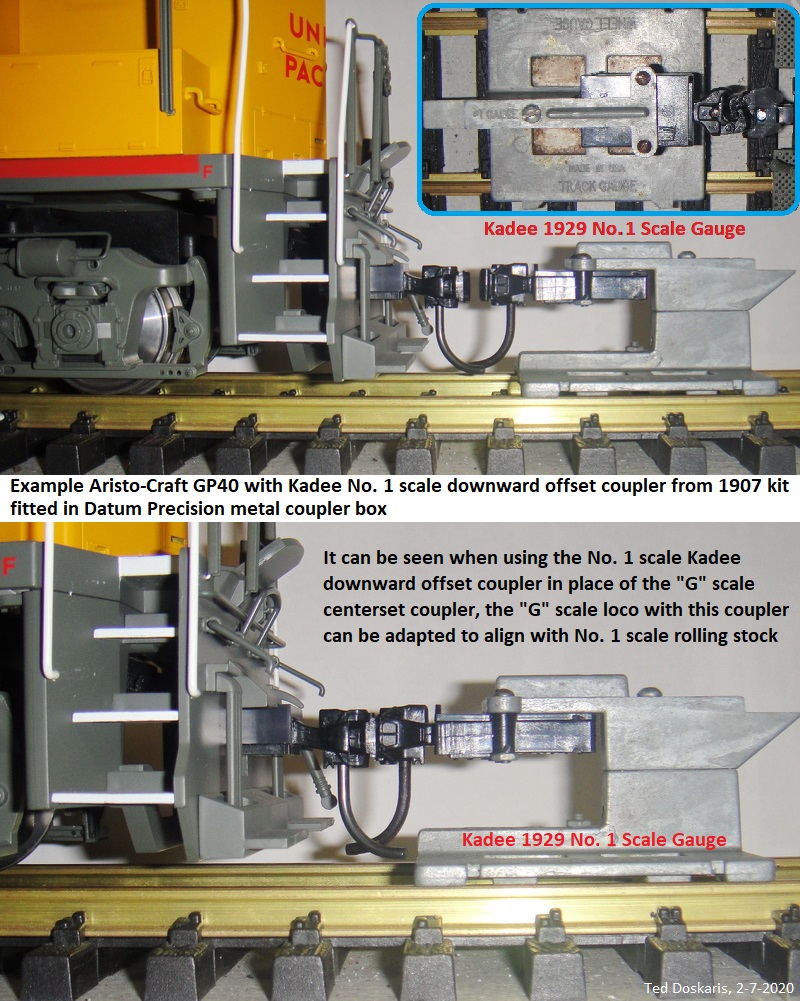 Similarly, illustrated below is how the older design coupler form the Kadee 1835 kit will align with the Kadee #1 scale 829 gauge. 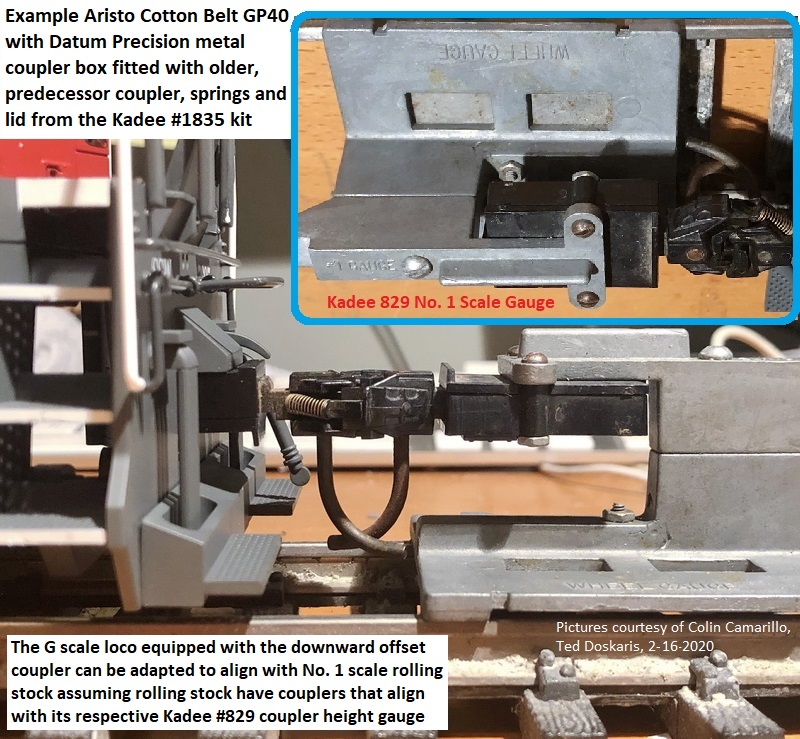 If using the Kadee #1 coupler from the 1907 kit on 1/29 scale products, it's prototypically logical to use a coupler height to rail head distance for 1/29 scale so that the horizontal centerline of the coupler aligns with the center line of coupler of the Kadee 980 / 880 gauge.

Therefore, if it is desired to use the #1 gauge coupler from the Kadee 1907 in the Datum Precision metal coupler box mounted on the GP40 (being 1/29 scale), one would have to correct for the mismatch. The same would be true for other 1/29 scale applications. Alternatively, the coupler from the Kadee 1917 kit that appears to be a true centerset coupler may possibly be used; however, this coupler has a very short shank with small hole.

That said, consideration must be given for the shorter shank of the #1 Gauge 1917 couplers with the expectation of limited operation for only the widest of curves when the loco is equipped with them being coupled to another loco or train (closer coupled proximity).

An overhead view of the nose of the loco (below) shows the projection of the coupler used from the 1907 kit. 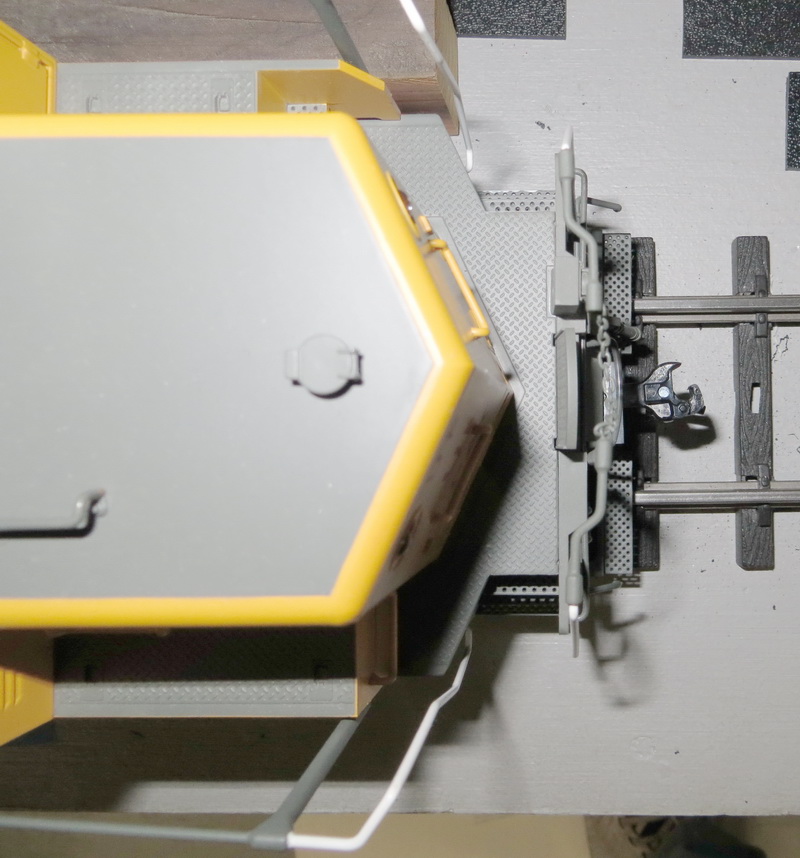 As to mounting the #1 Gauge coupler from the 1907 kit on the GP40, it seems possible that some shortening of the loco's post and the pilot lip that protrudes could be trimmed off to obtain the proper coupler to rail head height. Since my original intent for designing the Datum Precision coupler box employing true Kadee centerset couplers was to avoid doing any cutting on the GP40, this would seem counterproductive.

Alternatively, I suppose a slice of about 1/16 inch off the upper portion of the shank of the #1 coupler from the 1907 kit could be done, then use a spacer washer on the Datum Precision box pivot so when the coupler is installed, it would raise it up, but this would notably weaken the coupler's shank and may introduce some vertical wobble.