(note, Aristo-Craft went out of business at the end of 2013)

This section is tips and modifications for your Aristo-Craft locos. There's a lot of little things that you should know, and will help you enjoy your locomotives, check the submenus on the left for individual Aristo-Craft locos and some other topics listed.

Note: If you read nothing else, you should read the two sections linked belowon the most commonly used motor/gear drive mechanisms. This will help you to know what to expect, how to avoid problems, and how to repair them:

I would say that for the person that does not mind tinkering, Aristo-Craft motive power is a good deal for the money, but you must tinker with them, and there are some obvious and significant quality control issues in certain areas. This is true for many of the products in G scale.

Aristo-Craft suffered from many of the same problems others have with manufacturing in China. It seems to me that their issues were on the "worse" side, especially since other G scale manufacturers using the same factories have higher perceived quality (for example USA Trains). Over the years there have been "evolutionary" changes in products, unfortunately they have been in the majority cost cutting that has affected quality and reliability.

But, there is a lot of detail and fidelity to scale. Hats off to that department in Aristo-Craft, and it seems to be the strong dedication of one person, I believe "Michael J". The decoration (painting and road name identification) is some of the best. Once "tinkered with", the locomotives are reliable, and the new gearboxes are tough, and current production is all ball bearing.

Note: I also recommend you read about the wiring and installation of the QSI in the Mallet and Mikado sections, there some common issues and fixes detailed there.

better, direct link to where they are stored: http://www.aristocraftforum.com/exploded_parts/

As much as I hate saying negative things, many Aristo-Craft locomotives are wired differently, or just plain wrong. Normally they run OK on DC, but when you add RC or DCC or even one of Aristo-Craft's own plug in Revolution receivers, you can encounter problems, sometimes catastrophic.

Watch out for wiring in steamers especially, two common problems are miswiring in the tender, and the wiring of the track/power switch in the loco. Be sure to check out the Mikado section for an explanation and fix.

Also, the tenders on the Mallet usually have pickup wires to the tender wheels, but they are usually not connected to anything. Again the Mikado and Mallet sections tell you how to improve this.

In the diesels, the "MU cables" (the wires that run "through" the loco and come out as 2 pin JST connectors by the couplers) often have a "polyfuse" circuit breaker inside in the middle of this power "bus". These usually cannot handle more than one loco, so if you actually MU 2 locos, they usually trip the "polyfuse" circuit breakers and stop. A simple solution is to bypass these, but then you have removed some important protection.

My best advice: ANY modification to the loco, or the use of the "battery"/"MU" cables requires checking with a voltmeter. There are just too many experiences with melted wires and circuit boards documented on all the forums.

The "Prime Mover" modular gearbox system has several design weaknesses, and common assembly problems in my research and experience.

The most obvious is exhibited by the drivers slipping on the axles. The drivers are mounted on a tapered shaft. The fit is usually poor from the factory, and often red loctite is gooped on to try to bandaid this. Slipping drivers are annoying on a diesel, but can be fatal to connecting rod gear on a steamer. There are simple fixes to this, but time consuming. (There was an update to add a steel insert to the steam loco drivers, it did not help).

"my loco will not run on dirty track"

Another weakness is the power pickup. In the original "prime mover" design, the ball bearings on the axles used were all metal, so the power went from the wheel through the bearing to a metal clip and the wiring. Since then, "hybrid" bearings have come into use, where the balls are ceramic. This has an advantage, lower friction and heat, but NO CONDUCTIVITY, so Aristo-Craft has a very involved arrangement to pick up power and it is normally not tested/assembled properly. I have seen up to 50% failures in conductivity in brand new locos. 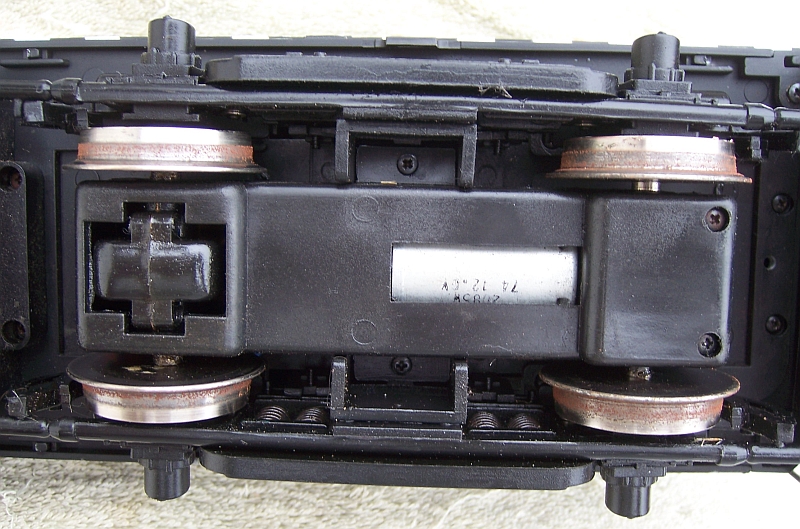 The only solution is keep the wheels dry, and clean with abrasive.

Quite a while ago, in 2001 Aristo-Craft took suggestions about using a socket in their locos for a plug and play interface for DCC decoders and began implementing it.

Aristo-Craft has used this over the years for some of their proprietary R/C receivers. Digitrax made a DCC decoder to fit. In 2008, several more DCC decoders were made, and Bachmann copied it for several of their locomotive, though they made some mistakes in the pinout. (there are people who say that Aristo-Craft implemented something different than what was published)

There are 2 rows of pins, but only one is wired up (12 pin), the other is used for mechanical support (10 pin). On the 12 pin connector, the pin assignments are:

Aristo-Craft locos come with a dummy plug installed in the socket to allow DC operation. It has the following jumpers:

The Aristo-Craft socket is NOT always wired the same, nor is the "sound" socket. There are tremendous wiring variations where wire colors are swapped, but bigger problems with sockets that you assume are standard.

Quite often, the motor is wired in reverse polarity. Sometimes, more dangerous, the track pickup wires and the motor leads are swapped. In DC mode with the shorting plug installed, things still work, but when you use a decoder, the track pickups are not directly connected to the motor, and everything goes nuts, if you don't burn up the decoder.

The headlight and backup lights are not always independent, nor controlled by the socket. The sound socket may get voltage from the motor, or from the track pickups. This may make your sound card go to full speed. This problem has been reported in the E8 quite often. Often the socket pins are connected to voltage regulators.

Rockwall Canyon Jeff says that you can use the LGB ball bearing wheelsets to sit in the sideframes of the RDC's to turn them into non-powered dummies. Further, he says if you unscrew and reposition the sideframes up on the subframes, you can easily lower these locos so modified to look better.

Update: Aristo-Craft closed it's doors and is no longer. This information is just for "history".

In reality there was an Asian company seeded by J.P. Morgan. (i.e. the company is NOT the JP Morgan we know in the USA)

The debate of why Aristo-Craft went out of business will rage as long as I'm alive I expect.

One thing that could have been a factor is the continuous "removal" of features, clearly cutting costs. I've listed a few examples. People were getting less for more money, and these cuts affected quality and reliability. In addition, assembly quality was worse, see the prime mover section on how poor assembly causes poor power pickup.

There much "chest thumping" by Aristo about patented products, which was pretty funny considering the original copying of other manufacturer's products.

Doing a little investigation, many of the patents were "ornamental", meaning only the appearance was patented.

Here's the famous patent for the smoke unit, which is ornamental only: https://www.google.com/patents/USD469132

Here's one for a "switching system", which includes the turnout and switch motor. How the patent office allowed a patent for a turnout that is of typical construction is beyond me, but perhaps reading the patent closer shows something unique: https://www.google.com/patents/US20100072327

Looking at the cars I've owned, I've come up with this list of six versions of REA/Aristo-Craft packaging, listed from oldest to most recent.

Here is a short list of Aristo-Craft parts I have ordered over the years, just to have a convenient place for them:

(note, when you try to search parts, you MUST put ART in caps at the front of the part number, no dashes... like ART29 ) 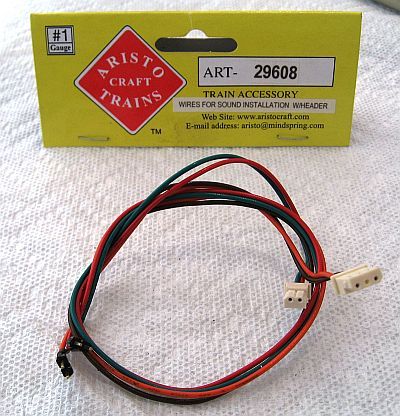 Some Aristo-Craft history of products, both promised and delivered

1993 - Aristo accqired Delton (actually from Caledonia), gets the C16

2001 - or about, original Pacific with old style drivetrain

Aristo-Craft Kuppler - promised and proposed as a"standard" and then a small production run made, nothing followed

SD9 - promised many times, even has an ART number, shown for years on the St. Aubins sale page

Streamliners - lowered with interior detail and led lighting - promised mid 2008, they made only one run, ATSF around beginning of 2008, second run PRR only, arrived October 2008

Streamliners - Interior and/or lowering kits for old streamliners - has not happened, promised (effectively) twice, latest promise is no later than early 2009. Since 1935, we have provided service and innovation to the Hobby industry. In this latest downturn, we cut back staff to the minimum required to survive. Then the government battle over the debt ceiling drove the consumer market down even further.

We’ve managed to stay in business, but the continued depression for the consumer has caused us to fall into debt that is unsustainable. We have put several million dollars into product development over recent years, but the need for customers to cut back on non-essentials has caused this investment to be lacking in returns.

We have seen leisure activities like golf courses plunge in popularity, as funds for such recreation have dried up. It seems to be the same for hobby time investments. Our products are no longer inexpensive as they were in the 1930s-era Depression. The cost of manufacturing along with minimum production runs and long lead times has caused a lack of ability to continue as a sustainable entity. It’s no longer a business!

It has been a pleasure to help our creative consumer base to enjoy their hobby and we have no regrets in doing so. Our business grew every year until the 2008 as the recession caused a shrinking of the mindset to stay active in our large-scale model train arena. We know that smaller scales have remained viable, but the higher cost of Large Scale trains and the space required to run them have not maintained their share of the market. Our airplane R/C portion of our business was lost when our patented frequency changer was lost to the 2.4Ghz portion of the marketplace, with no frequency compounds needed any longer.

For 80 years, the Polk family has made a fair living in the Hobby industry. I can’t help but remember the scores of co-workers that have helped make this organization as special as it was. Thanks to them all, but notably: Gil Rose, B.M. Song, J.K. Kim, Sam Kimm, Tom Flynn, Cliff Crane, Charlie Binder, Marvin Binder, John and Sherry Shievdayal, Aixa Lebron, Joe Bamberger, David Newell, Walter Matuch, John Mikesh, Navin Shievdayal, Marguerite Hubert (Rose), Michael J. Vickey, Jonathan Polk, Scott Polk, Fred Polk, Irwin Polk, Nathan Polk, Maryann Polk Bob Calandra, George Adams, Michael Hauptmann and so many others, it would take a book to list them all. While I can’t list all the hundreds that were part of the team, they remain in my heart and mind.

Our humble thanks to our loyal customers. Our apologies for not being able to keep this almost 80-year-old business going. It’s a heartbreaker for us all.