A description of the Split Jaw Drop In / Lift Out Bridge Clamp will be used with an example 1200 mm (4 foot) long reinforced LGB plastic bridge, LGB P/N 50610.  (The bridge was strengthened with a steel strap added at the bottom on each side to assure the support of two or three 15 pound locos.)  The bridge serves to connect my under house layout (having a lockable door) to the outdoors.  I normally put the bridge indoors when not using the outdoor layout.  The bridge spans an area under a deck that needs access to the Air Conditioning Compressor should it need servicing (which it did!).  Accordingly, the bridge is a complete drop-in (not practical to be hinged at one end), so two clamp pairs are used with one pair at the tracks on either end of the bridge.

Prior to using the Split Jaw Bridge Clamps, Aristo slide-on rail joiners (without any fastening screws) were used to connect the bridge track rails.  The slide-on joiners worked fairly well, but because they are just thin metal, they don't have the rigidity of the Split Jaw brass clamps that better align the rails in both horizontal & vertical plains.

The Split Jaw packaging includes one pair of brass clamps, P/N SJ40401, with one right angle Allen wrench for the socket head screws that hold the clamp to the track rail and its other parts together.  Normally, only the wrench will be needed for the track fastening screw, but be sure to use it to check the tightness of the other screws.  Note: Split Jaw only offers their metal Bridge Clamps in brass, though the clamp's adjustable ball appears to be stainless steel.

I elected to use Aristo-Craft rerailers at either end of the bridge that the bridge connects to in the event a train would have a derailed car or loco approaching (from either end) with the intent of preventing a derailment causing a more disastrous "pile-up" at the portal.

Shown below is a train with 25 cars (totaling about 90 pounds of car weight) exiting the bridge to outdoors. 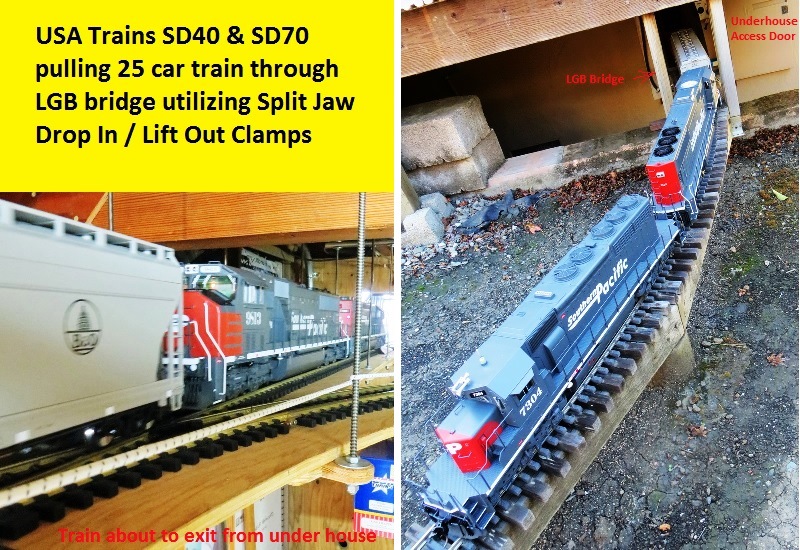 My train layout consists of brass track indoors but more costly stainless steel outdoors, and I use track power.  Because brass tends to oxidize more so outdoors (and when it does it becomes electrically resistive or insulating) cleaning is required  more often, sometimes using an abrasive.  Stainless steel does not suffer from this, so it's easier to maintain in the outdoor environment with only having to use a non abrasive Swiffer with wet mopping cloth from time to time to clean off organic residue.

As to the brass bridge clamps, I don't anticipate oxidation to be a problem since the adjustable ball that retains the rail is stainless steel, and track power is supplied on both sides of the bridge.