Before closing it's doors, Aristo made two "generations" of these outwardly beautiful switches.

The first generation, pre August 2005, has stock rail guard rails of straight rail with a abrupt slice at the end of the rail:

This is a true #6 switch, below is a closeup of the frog and the rails beyond it, they are straight, as in the prototype: 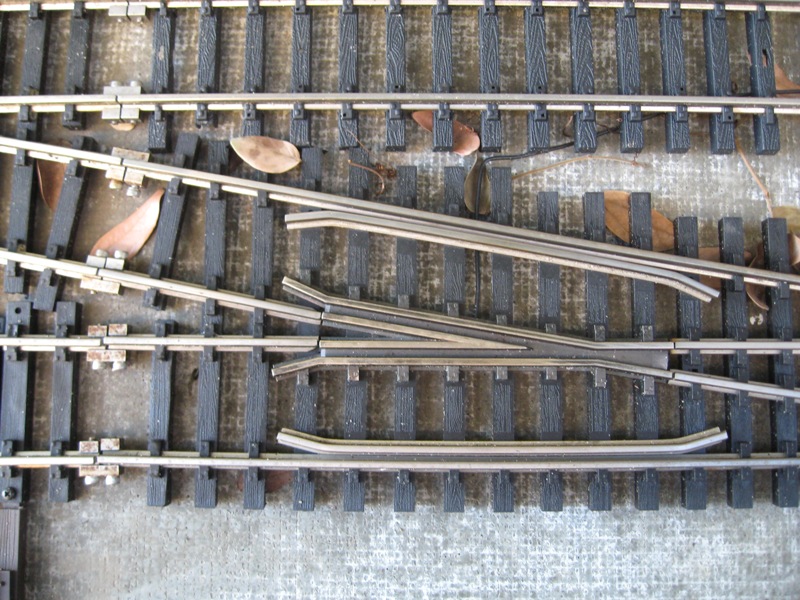 Below I measure out 3 inches: 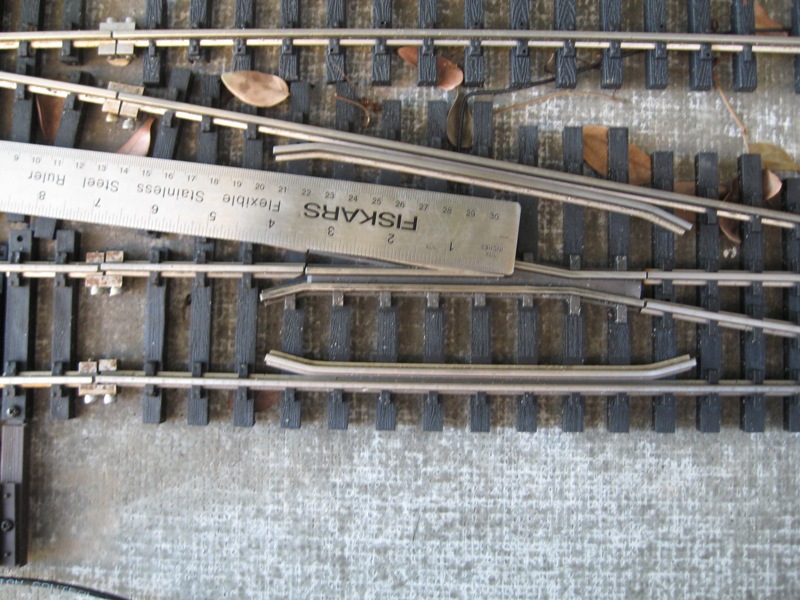 Now at the 3 inch mark, measure across the outer rail heads: 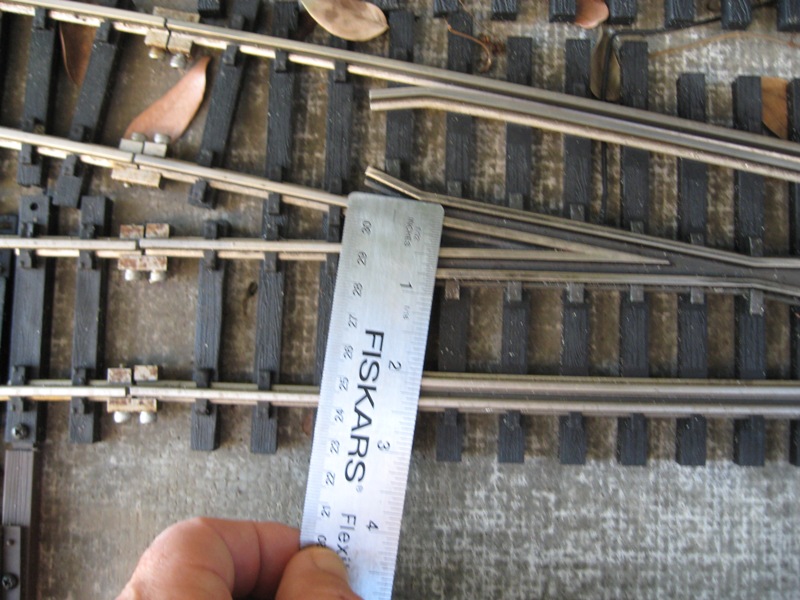 While the appearance is great at first glance, this switch has many faults, some of them are very difficult to solve. I would suggest buying the USAT #6 switches instead if you are in brass. I'm in stainless steel, and code 332, so no other choice right now.

The basic problems are:

The frog is cast pot metal that has the typical Aristo "mystery" plating. It is a live frog powered from a micro switch that is activated by a small dowel pin screwed into the throw rod. (there are variations on how the microswitch is operated.

Power to the point rails is from 2 small plated steel tabs that the points slide upon.

Power to the closure rails depends on a small plates steel tab that rubs on the point rail, and the other end of the tab is in contact with the appropriate closure rail.

The microswitch is not weatherproof. Aristo recommends putting grease in it. If you can pack it with grease, that might help. You need to try to pack it where the actuating pin projects from the body. One person encloses underneath and around the sides with plastic, making a little tub around the microswitch and fills it with grease. I have not had any success with this, nor have others. I think the best thing would be to find a sealed microswitch. Aristo now supposedly sells a waterproof microswitch, but has never announced if this is included in current production or not.

The location of the microswitch is not adjustable, and the pin that is screwed to the throwbar that hits the microswitch sometimes does not operate the switch properly. The easiest thing is to put a bit of tubing on the pin, like heat shrink.

Update: in March 2009, Aristo announced a "waterproof" microswitch. I'm skeptical, since the actuator pin on the microswitch is pushed flush with the switch body. Will report back soon as how they work.

We're getting in some new waterproof micro switches for use with the Wye and #6 switches. This is an upgrade accessory and there are 2 per bag. The are exactly the same size as the current ones provided and can be easily retrofitted.

ART11903 is the style # and they are $5 each or $10 for the 2 per bag if you have a need for this type of device. They are already in the store, but cannot be ordered until they are in stock some time next week.

All the best,
Lewis Polk"

The power is brought to the frog through several weak points. The basic problem is wires under the heads of rust-prone screws screwed into the rails. The thermal cutout between the microswitch and the frog is likewise connected with screws. This last item can be cured with solder.

Also, feeding the "frog" rails (the outer rails are stock rails, darned if I know what to call the 2 short rails coming off the frog) are wires under screw heads.

You can tighten the screws and shoot them with grease (I use a spray anti-corrosive that has lanolin in it, stays behind and keeps moisture out)

My firm recommendation is to jumper power directly from each stock rail to each "point rail" thus bypassing all the jumpers underneath. Since I use rail clamps on all 6 rails, this is simply a 14 gauge solid wire, crimped into ring terminals. The jumpers underneath, even when not corroded, are just too light in gauge to handle the current of large scale locos.

In the worst case, only the frog will be unpowered which is usually no problem except with 0-4-0 locos or locos with badly designed power pickup.

The components do not handle moisture well, see the following corroded parts from a #6, notice the microswitch is jammed in the actuated position. The points receive power from a small metal tab near the beginning of the points. This tab is cheap plated steel, and will rust and/or corrode over time. The tab depends on the points touching it, which is only from whatever the tension is afforded by securing the throwbar. In addition, the tab is not soldered, welded or even clamped to the stock rail to pick up power, it must get power based on just touching the stock rail and a screw nearby securing the ties to the stock rail.  This will eventually go bad, either the plating corroding, the points not pressing enough on the tab, or the contact between the tab and the stock rail not being enough for conduction.

There is a small tab that is underneath the closure rail. The end of the tab extends under the point rail, with a small "pimple" to make contact. Since this is cheap plated steel, it eventually corrodes, and also, since it is not spring material, it eventually loses tension and no longer contacts the point rail. In addition the end of the tab that extends under the closure rail can lose contact, luckily there is a screw nearby that usually keeps conductivity.

The frog is live, and must be isolated from the "frog rails". Right now there is just an air gap. So there are 4 locations where a short can occur.

The place where the gaps can shift (and close and short out) is between the frog and two "stub rails". Some of my switches came almost touching, and if you flex the switch you can see this gap moving.

Typically you can insert a piece of an old credit card (or one that comes in the junk mail) into the gap. You can put a drop of ACC in there if you are concerned about it moving.

Trim the excess with a sharp x-acto knife. If the gap is larger, you can use styrene. I use the credit card material because it is easy to cut. 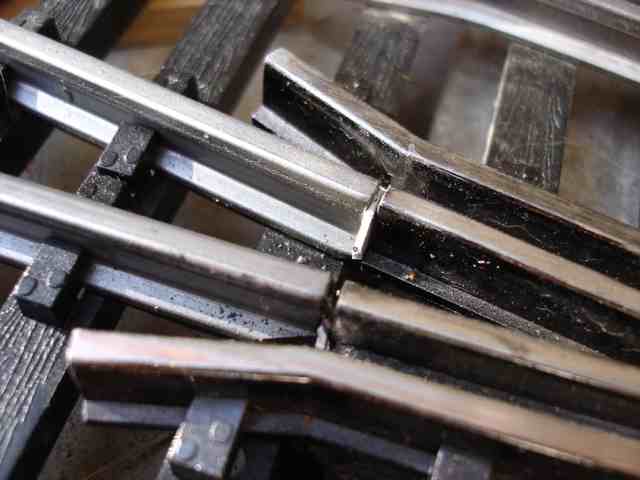 The throwbar is made of the same NON UV resistant plastic as the wide radius switch (same part). All I can say is paint it or spray it with Armorall type stuff every so often. Aristo will replace these for you under warranty. As of 2009, no change in the plastic compound has been made or is anticipated. Crazy, they just rot away after a while.

Sometimes the mechanism does not allow enough throw. The manual throw has a spring in it that can be assembled improperly. You can check them for binding, and that the pivot screws are not binding the points.

The screws in the part of the switch that pivot also sometimes come loose. You can use a bit of loctite blue on them, but be sure the switch functions freely. One way to check this is remove the switch motor, and hold the switch up sideways, and see if the switch "throws" via gravity only (both directions).

If you ensure this free motion, you will not have problems with a properly functioning switch motor, manual or electric.

Well I have saved the best (or worst) for last. The frogs of switches in place for a while are showing lots of wear and damage. What I can tell is happening is that the wing rail flangeway width combined with the point of the frog being "too short" is causing premature and unusual wear.

The frog casting is apparently pot metal. It comes plated. This softer material allows the frog point to wear more quickly that I would like. But the major problem is the wheels dropping into the frog. This is not a flange-bearing frog, the flangeways are "properly" deep.

So, as in real railroads, the combination of the wing rails and the point of the frog should support the tread of the wheel the entire time through the frog.

But this does not happen. The excessively wide flangeways and the short frog point conspire to let normal wheels drop into the frog. This wears down the frog point and chews up the insides of the wing rails. I think the only solution would be a stainless steel frog with narrower flangeways and a longer frog point. To fix existing switches, it may be necessary to fill in the frog somewhat to have the wheels ride on the flanges. Not a great solution, but possible. It's all I can come up with so far.

Here are 3 pictures, notice the wear inside the frog: 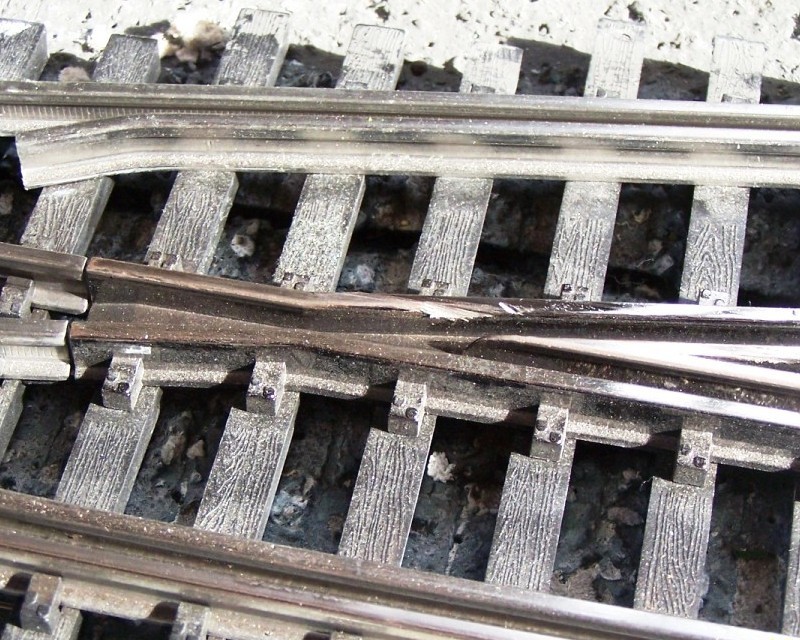 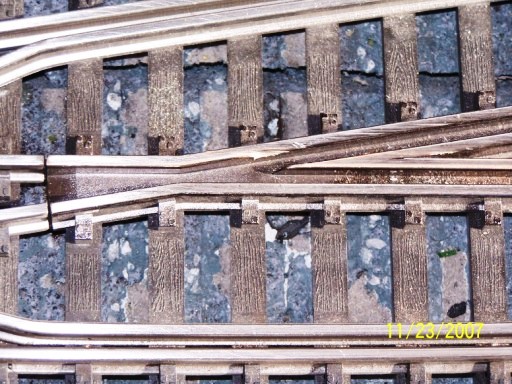 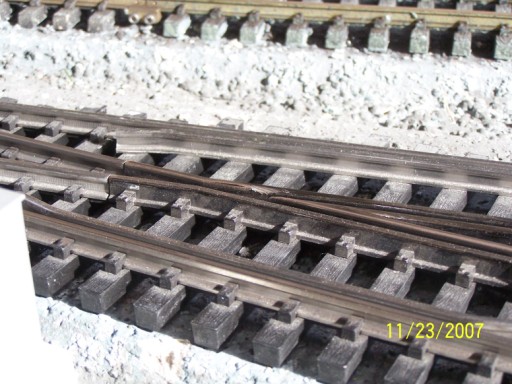 I am using air operated switch machines that have an integral TRUE waterproof microswitch rated at 10 amps. I power the frog from this and connect to the rails with clamps to draw power for the frog.

I recommend making a nice hefty jumper from each stock rail to each closure rail, that fixes the problem with the cheap wiper to the point rail, and also eliminates the dependency on the point rail to get power (the point rails have their own problems)

While you are at it, make nice jumpers from the stock rails to the 2 "stub" rails after the frog.

I have not come up with a good solution to fix the way the point rails get their power, just try to keep them clean and spray some anti-corrosion spray on them. When the plating finally gives, you will need a better solution. I'm thinking of bringing the power from the closure rails with a jumper to the screw that lets the points pivot.

Correcting problems with the frog:

Well, this is a problem. The geometry of the frog is obviously wrong.

The best solution at this time is to put an insert in the frog to make it a "flange bearing" frog, i.e. reducing the depth of the flangeways so that the wheel actually rides on the flange and not the wheel tread.

This way it cannot drop into the frog. This is overall a poor solution compared to a correctly designed frog. Now the flange diameter of your wheels becomes critical... too much and the wheels bump way up when hitting the frog, and too little, and they still drop into the frog and damage it.

Train-Li has made a stainless insert to convert the #6 to a flange bearing frog. When installed, it makes the flangeway depth exactly 3.0 mm as per NMRA minimum standard.

Here's the insert, looking at the top side: (you can see chamfers to allow a smoother transition to the flanges supporting the wheel)

The picture below shows the bottom side:

When installing, I would suggest tapering these ends a lot more, the stock chamfers are still a bit abrupt.

The insert fits the frog perfectly:

Update: I'm not sure Train-Li still sells these. Also, just before it's demise, Aristo offered the same thing, not as well made, but good enough. It really must have irritated Aristo. Anyway there was also a rumor that the last batches of #6 switches came with the insert, just before the demise of Aristo, and also the short lived PolksGeneratioNext (run by Scott Polk).

In 2019, Ted Doskaris had these inserts manufactured, and are available from https://www.camarillopacific.com/