There are many different couplers in G scale, Almost every rolling stock manufacturer makes some kind of knuckle coupler, most have pros and serious cons.

Very few have remote uncoupling. Many are cheaply made and pull apart under stress. None of the manufacturers make any kind of "mounting kits" to adapt their coupler to other manufacturer's rolling stock.

In short, if you want a coupler that can be remotely uncoupled, looks like a prototype and fits virtually anything, and has many different adapters available and documentation on how to mount couplers truck or body mount, you have only one choice, Kadee. If you standardize on any coupler this is the one to get in my opinion if you want all the above features.

In 2009, Kadee updated the design, which is stronger, the knuckle spring is more hidden, and the castings look more like the real thing:The coupler shank is likewise strengthened and is wider where it connects to the knuckle. This is a great improvement to an already great product.

Originally you purchased couplers as a unit, the coupler and the draft gear box. Based on the different combinations, this resulted in a large amount of part numbers. Apparently to simplify this (and also to allow the price to creep up a bit!) the couplers are now packaged separately from the draft gear boxes.

I look upon this as a benefit, since now I just keep a stock of basically 2 types of coupler and a number of different draft gear boxes.

There are a couple of exceptions, the 906 is a combination of the 900 coupler and 910 gearbox. (basic setup for body mount)

You can also buy the standard truck mount gearbox combined with the 3 different offset couplers, the 907, 908, 909 which all use the 911 gearbox.

This is sometimes a controversial subject, but as time as passed, the community has become less polarized, and almost everyone you talk to will tell you that body mounts are superior.

Truck mounting is simple, and works with sharp curves better, it keeps the couplers centered between the rails no matter how sharp the curve. It works irrespective of body height, although few people play a lot with body height.

The negatives of truck mount couplers is that you are passing the forces of moving the train through the trucks, and on curves you are creating significant sideways forces on the trucks, basically "twisting them" within the rails.  This can severely limit maximum train length, and it's especially noticible when backing a train.

These forces can also deflect the couplers up or down, increasing the changes of uncoupling.

Truck mounting also requires modifications to the car bodies to allow the coupler to swing side to side, requiring an unsightly gap or notch at the end of the car.

Body mounting looks prototype, and allows much longer train operation, both forwards and reverse, no twisting forces are applied to the wheels, they just guide the car, all forces for the train go through the bodies.

Now that the couplers are fixed to the more stable bodies, coupler height is controlled and there is less chance of uncoupling.

The only down sides are that now with the couplers fixed solidly to the body, long cars and/or sharp curves will put the couplers outside the center of the rails, so you will have a limit on how sharp a curve you can have, and coupling and uncoupling on curves will be more difficult. Basically over time, experience has shown that for 40-50 foot cars, 8 foot diameter curves is about the minimum for body mounts.

One other disadvantage is that vertical curves as when entering or leaving a grade, will move the couplers up and down significantly on long cars. Your vertical transitions cannot be sharp like a roller coaster.

For body mounting, Kadee makes one type of coupler that has "slack action", i.e. there is a spring in the draft gear box that allows the coupler to move in and out. It looks great in my opinion.

You can see that the elongated hole in the coupler allows the coupler to "pull out" under tension. The effect of taking the slack out of the train is quite realistic, and also encourages prototypical starts and stops.

The original coupler style was the 831, which because of historical design (lowering the coupler mount tang to clear the body) required a "large offset" coupler to get the coupler back up to prototype height:

For conditions where you cannot have a large gearbox, due to clearance reasons, or cosmetics, use the small coupler box (with a centerset coupler if possible):

The number 912 is very compact, and the ideal gearbox for cars with a short or open platform end, like tank cars or cabooses:

There is a swinging gearbox, that gives you a lot of coupler swing and will attach to many mounting posts, like the Aristo E8 locomotive pilots, Kadee 913:

While the large offset couplers can make mounting easier, they provide twisting forces that can cause problems with long trains. Whenever possible, I recommend using "zero offset" or "centerset" couplers, so no twisting forces are applied to the car body, or worse, to truck mountings.

Some people have reported coupler breakage. Many people are non specific, but I have investigated and found that these fall into 2 classes:

2: You can fracture and break the center post in some of the draft gear boxes from abuse or collisions. The 831 box for example can be vulnerable to this. If you have this problem, use a stronger gear box, or run a screw completely through the center pivot.

Now, for people in narrow gauge modeling, many will use actual scale couplers, with working cut levers and all.

I'm in 1:29 standard gauge, and I like the remote uncoupling feature.

I also like the many couplers and draft gear housings that Kadee makes available as well as the documentation on their site for what couplers to convert what locos and rolling stock.

There are 2 basic styles of coupler mountings, body and truck mount. Specifically in the body mount, there is a square draft gear box that has an internal spring that simulates the slack action. It only works with the couplers shown above. This is the #830 in the original style coupler, and the #906 in the new style "prototype head" coupler.
Now is a good time to put up a small picture of the three different types of springs used in Kadees: 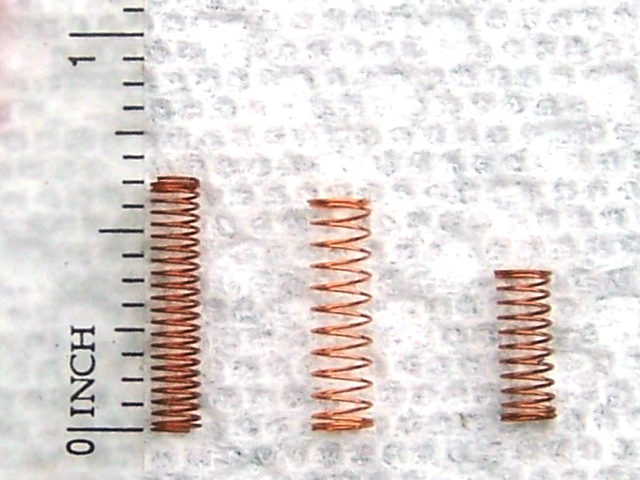 The spring on the left is the typical spring used in all the smaller draft gear boxes. The spring in the center is the #878 centering spring, that is used in the large draft gearbox, 830 / 906. The last spring is the knuckle return spring for the original style knuckle coupler.
Here is a picture of one of the two styles uncoupling magnet: 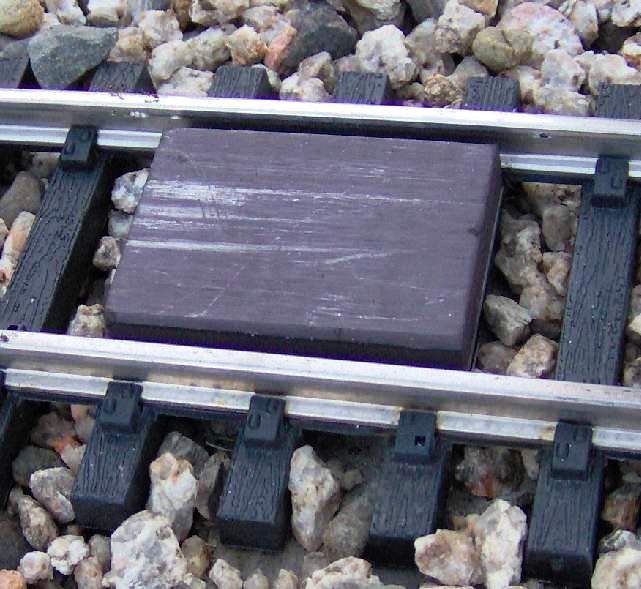 Interestingly, Kadee has you mount the uncoupler with the coupler height gauge, there is no specification.
I measured my Kadee gauge... there is a flat top, so I could use a micrometer to measure the thickness to the rail head and the thickness to the plate that positions the uncoupling magnet while the glue is setting.
Rail  part: 0.159, uncoupler part: 0.143, so a difference of  0.016 or just about 1/64" .... knowing that Kadee uses 1/8" for trip pin clearance, and 1-1/16" for coupler centerline from rail head, it's pretty safe to assume 1/64" is the specification. So with the proper trip pin height, you have 7/64 clearance between the trip pin and the uncoupler, or about 0.11" .... This means you need solid coupler mounts that don't flex, and if truck mounted, you need to make sure nothing happens to make them deflect under load.
The older Kadee design had a crown in the inside face so when couplers were under tension, they tended to slide up or down.

Couplers are tough, but not the shims:

Left outside in the sun in San Diego, 95 degree day: 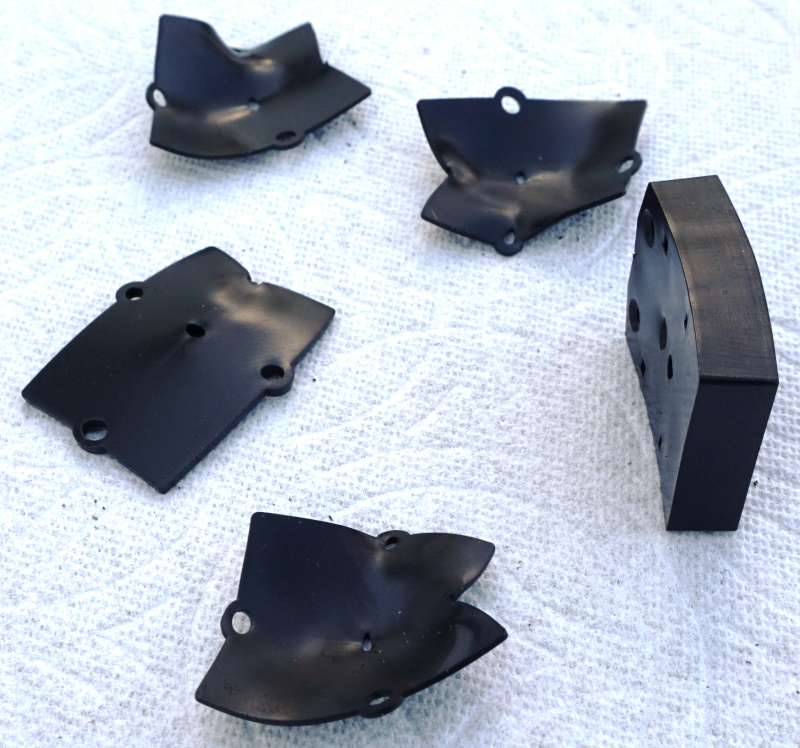