Like many people, I started automating things at home with timers. Power interruptions, daylight savings time changes, seasonal changes, and just too many things to set made me look for a better solution.

I started many years ago with X-10 from Radio Shack, with just simple remote on off of lights, etc. Soon there were timers for the switches. X-10 is not a great protocol, but it mostly worked.  Later Applied Digital made the Ocelot, a programmable controller with some GPIOs.

Further on in time, I found the HomeSeer program, which was much more sophisticated and allowed more complex operations. I moved all my sprinklers to X10. This was a bit of cost, since 16 output relay boards were not cheap.

X10 has it's own challenges, due to it's implementation as a carrier signal on AC wiring, and the fact it is an unacknowledged protocol, i.e. it does not report back that your command was carried out.

In 2020, I wanted a more reliable system, and decided to convert the sprinklers over to Z-Wave. Again the cost of a 16 channel Z-Wave relay system was expensive. My nephew Christopher suggested a Z-Uno, basically an Arduino with the Z-Wave radio on it, and then you can add inexpensive relay boards.

We started running into problems with HomeSeer, and of course HomeSeer blamed Z-Uno, and Z-Uno blamed HomeSeer. To determine where the issue was, I purchased a Zniffer system, basically a $30 USP stick and free software, and sniffed the protocol. Yep, my old friend HomeSeer was not sending the right codes, and further work determined other skulduggery by the HomeSeer people, i.e. not supporting certain Z-Wave products in it's configuration files.

That did it, and we went over to Home Assistant, a linux-based open source program. I set up a virtual Ubuntu machine under Hyper-V on my Windows 2012 R2 server and away we went.

Years ago, I found this neat system called "X10"

It sends signals over the AC lines to control things. You can buy plug in modules that will control lamps or appliances, and also replacement wall switches and outlets.

There are also a number of other devices available, like alarm systems, thermostats, etc.

Basically, it's a one-way signaling system,  you send a command and hope it is received. That is a weakness but the stuff was pretty cheap.

Since the signal is transmitted on the AC lines when the AC signal hits zero volts, it's simple to make products for, but very susceptible to noise. In addition, transmitting the signal on one "leg" of your 110v circuits does not allow it to easily get to the other 110v leg.

Signal coupling the two 110v legs of your house was initially done with a big disc capacitor across the 220v lines (the two hot sides of the two 110v legs). This works ok, but the only reliable way to have good signal is a repeater, which listens on "each side" and re-transmits an amplified signal. There are some cheap ones, but none work worth a damn, only the $150 and up Leviton ones work.

But this has worked for me for a good while. I've had to mess with some wiring, found some things that made a lot of interference, and some places where I just could not get a reliable X10 signal.

I initially used a program written in 1991 by Steve Billard of Sympathetic Software. http://www.sbillard.org/pages/Software

It worked on a CP290, a small, wedge-shaped controller with a 9v backup battery. Of course you had to reprogram it every time you wanted something to go on or off at a different time. So once a week, I ran the program to update my morning and evening times for my lights.

This was great, the software needed to run all the time, so I needed a dedicated computer, but no problem, I have a full time Windows Server going. I could program lights so that their on off times were relative to sunset and sunrise, it understood daylight savings changes, great.

Now the software was good enough, but the X10 system is getting a bit long in the tooth, and even though there were extensions where you could poll the status of a device and then write a routine to make sure the device heard you, there were still too many limitations, and not much new going on.

Well, there are some replacements for X10. There is something called Insteon, which tries to combine X10 on the power lines with some RF signalling, and there is Z-wave, which is pure 900 MHz signaling.

What I liked about Z-wave is that it is a fully acknowledged protocol, i.e. you know that your command was received and acted upon, because the controlled device reports back, and that it is a "mesh network", where basically every "node" listens and reports on who he can hear.

This way, you can have several paths to a device, and it makes the entire system more robust.

The z-wave stuff integrates nicely in Homeseer, and I presently have both X10 and z-wave devices, but all new stuff will be z-wave.

Here's a screen shot of one of the HomeSeer pages. It has a built in web server, so you do all the configuration in a browser, from any PC in your house. 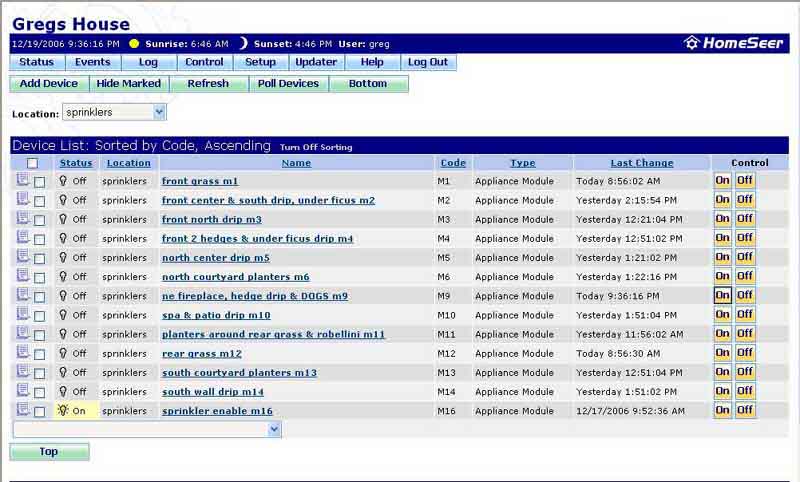