To be described is an example KitchenAid wall oven (one of many Whirlpool brands) that had experience a door latch problem during an intermittent power outage.

The illustration below shows how the oven normally would respond when opening & closing the door and the trim pieces that hide how the oven is mounted to the cabinet. 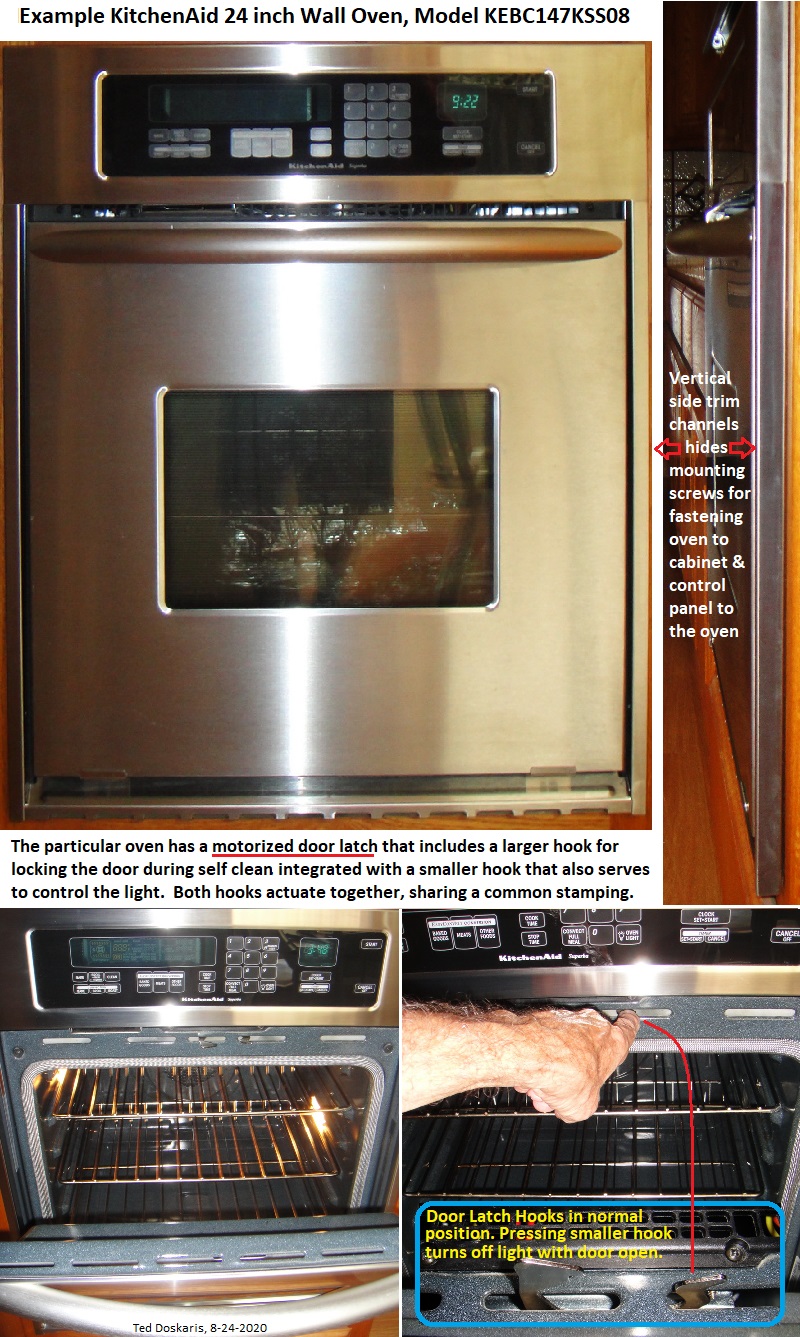 During and after a succession of power "brownouts" and surges, attempts had been made to reset its timer clock, not knowing which power interruption would be the last!

What ended up happening was the door latch had been unintendedly actuated for the self clean function but got into a position of almost self clean with the door open, where the door could not be completely closed. Therefore, the interior lights were always on and the control panel display would indicate "close door" if attempting to initiate a bake or other operational function.

So to remedy the problem, access to the oven's interior control was needed.
First, the power source to the oven is to be turned off. 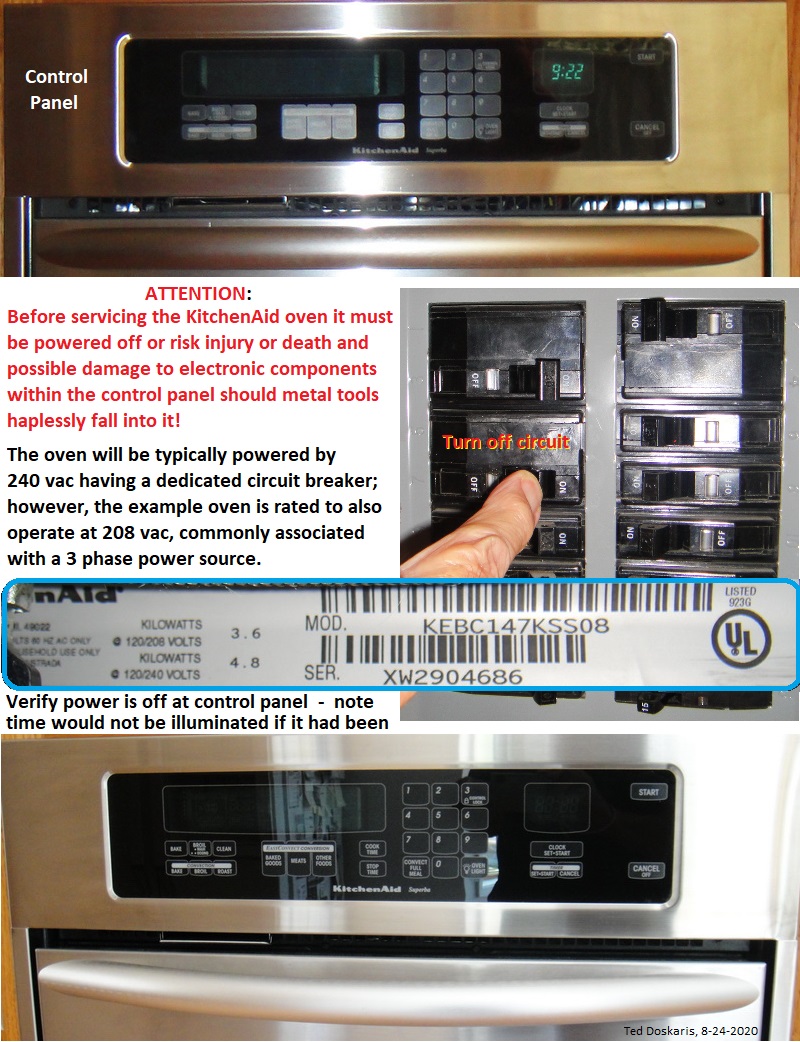 The trim pieces are now to be removed to expose the screws that fasten the oven to the wall cabinet. 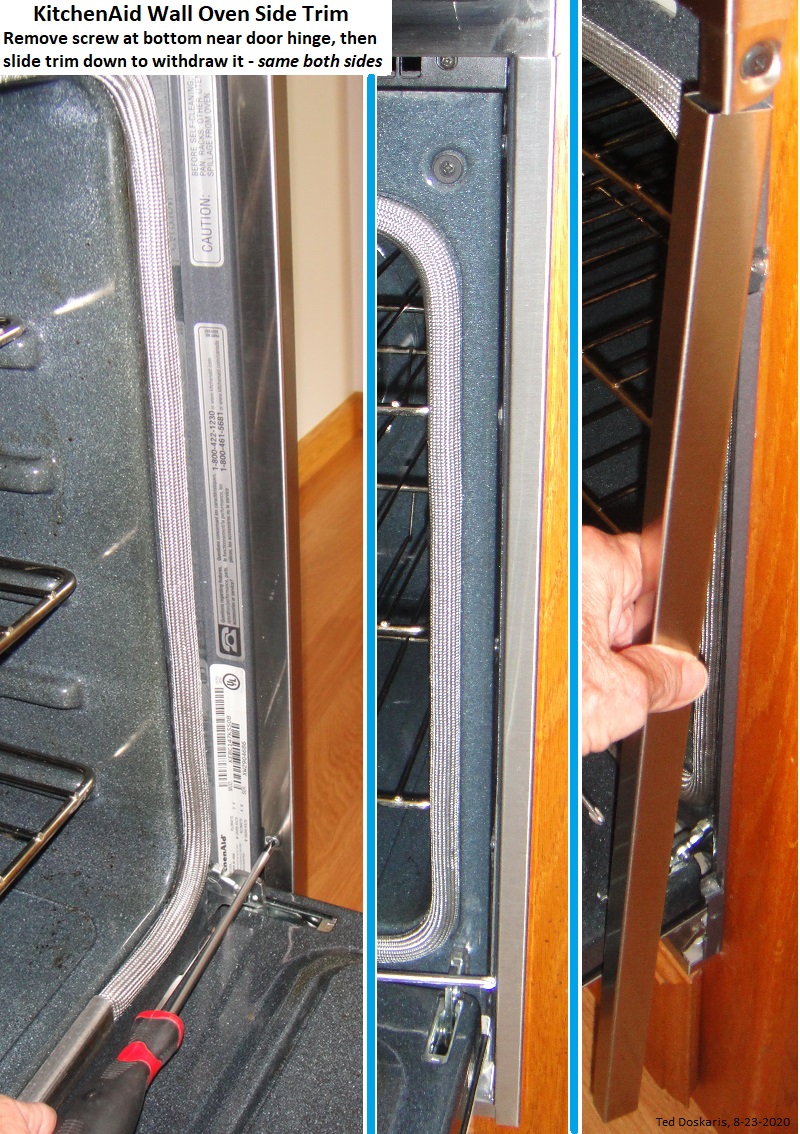 This example oven only has one screw at each side on its "rails" to be removed that hold the oven into the wall cabinet. 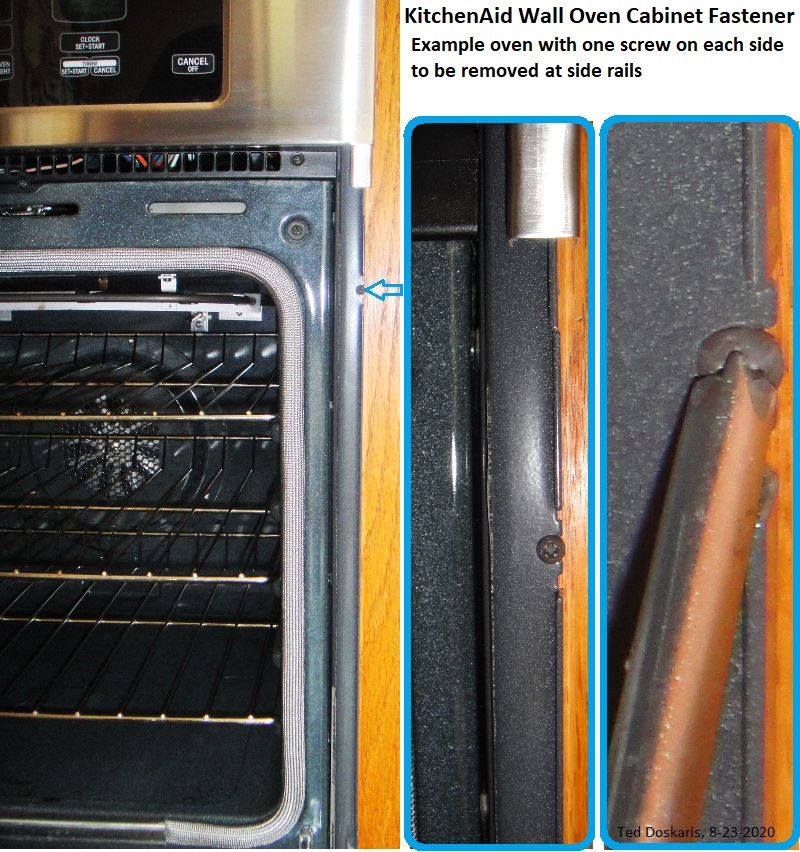 With the screws removed, the oven only need be partially withdrawn from the cabinet. It's front heavy with the door, but no need to remove the door.

With the forward sides of the oven exposed, the "rails" are to be removed so the control panel can be easily separated to gain access to the door latch mechanism hidden behind it. (While a service manual and many "do-it-your-self" videos may not show removing the side rails, it was found to be the only "clean" way to both remove & later reinstall the control panel) 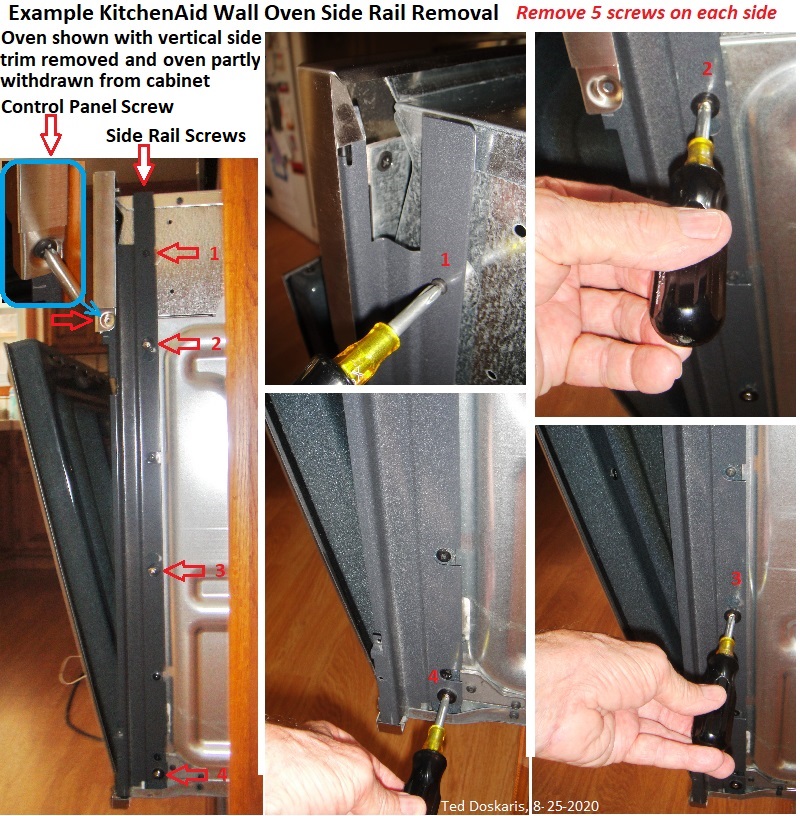 Looking at the illustration below, it can be seen how the control panel is retained.

The control panel need not be completely removed from the oven, but just tilted away enough to be able to get your hand and fingers inside to reach the door latch mechanism.

Looking closely, this example oven has a motorized type door latch mechanism with the name "Meteor" stamped on its motor. A wiring diagram with Information about possible door latch types that could be used is illustrated below. 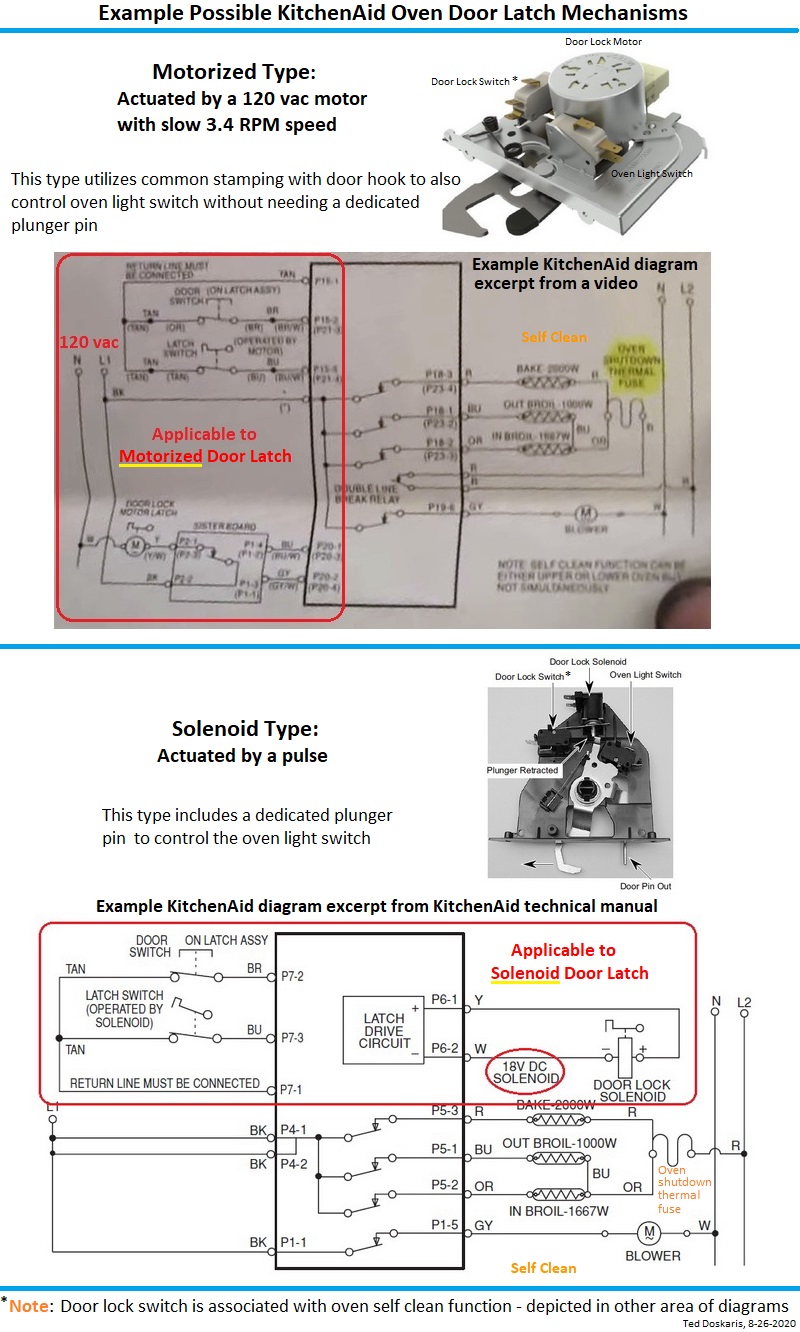 So in this example oven, the door latch type is obviously motorized - not the solenoid type.
What's more, the mechanism is branded as being "Meteor", an Italian company that apparently sources these assemblies to various companies, including Whirlpool (KitchenAid).

An excerpt from a Meteor technical sheet is shown below that describes attributes with a depiction of a closely resembling latch assembly to that of the example oven - with the green bounded inset picture I put there. 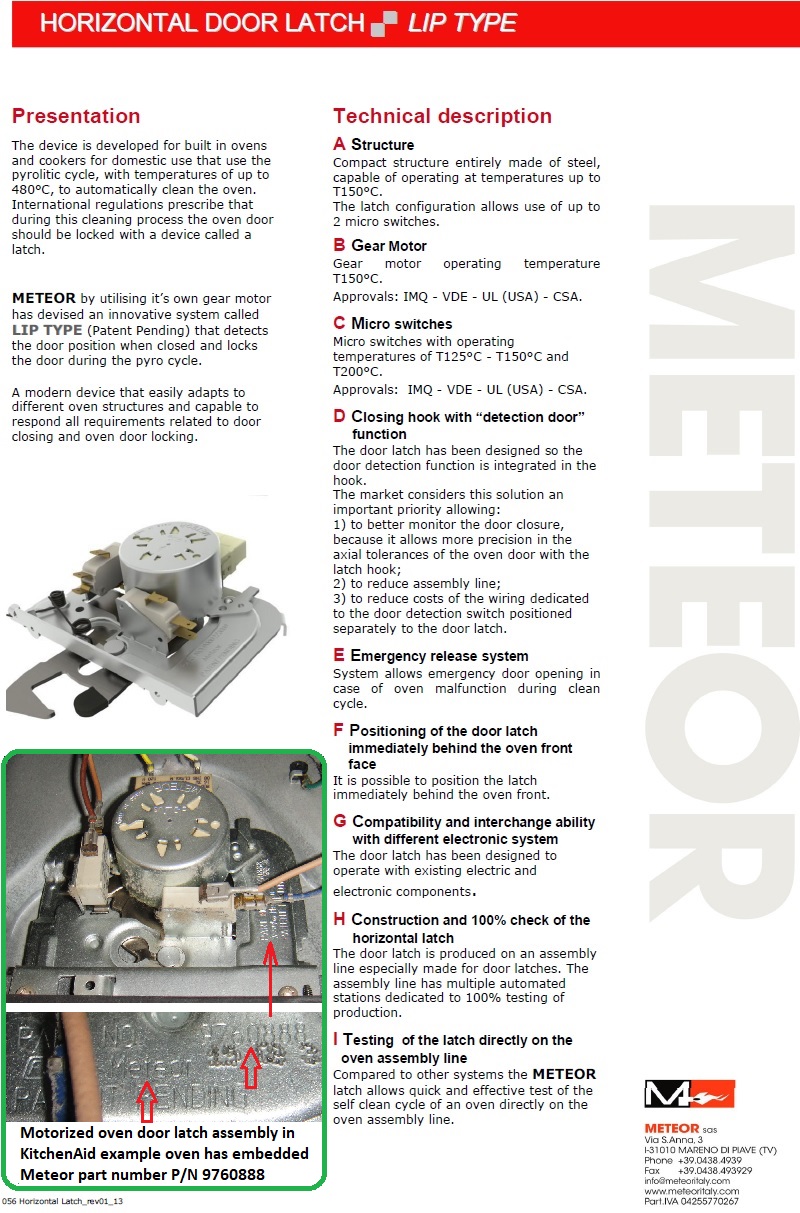 Note the Meteor part number of the example oven latch assembly is 9760888, but later found to be superseded by a more readily available, less costly, part number 9760889 as a replacement.

That said, the latch assembly in the example oven did not have to be replaced, but merely energized to get its hooks in the proper position as illustrated below. (Caution, to avoid a catastrophe, be sure the latch assembly in a given oven model is the type that can be powered by 120 vac if attempting to apply power to it as done here.)

After the door latch problem is remedied, the oven parts are reassembled and oven put back into the wall cabinet in the reverse order that they had been when removed.

Shown below are some information sources found pertaining to the example model oven.