Some of Aristo's EVANS type box cars (and 100 ton hoppers, too) don't seem to have lubricated axles as they come from the factory. This causes excessive rolling resistance that is particularly significant for required pulling effort with many such cars in a train.

Below is my experience with "tweaking" an example Aristo EVANS car for improved operation.

BTW, most of the newer production run EVANS (and 100 ton hopper) cars now come with plastic wheels. Furthermore, their Barber type trucks now include knurled axle tips on both the plastic wheels and metal wheels to help retain the emulated roller bearing caps. (Prior factory production runs did not include this feature.) 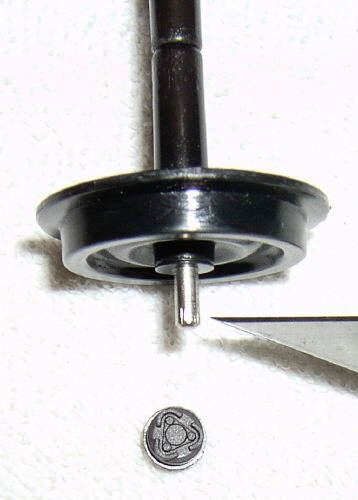 The ART-29111B wheel assembly is intended for the Bettendorf truck of the older type 40 foot cars.
The following pictures show a comparison of Aristo-Craft metal wheels depicting the ART-29111B longer hub with its shorter axle projection on top with the original Barber truck wheel on bottom with its shorter hub and longer axle shaft projection: Note: It is to be appreciated that the hub projection discussed is not to be confused with the overall axle tip to tip dimension that I found to be virtually the same for the various version wheels.
(The bottom two axles are the original metal wheels provided with and removed from an Aristo Conrail EVANS car truck.) 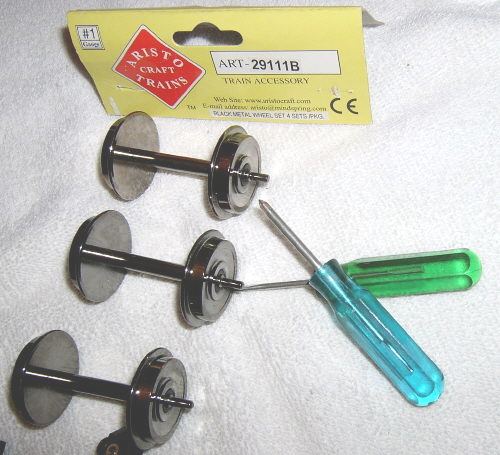 Aristo-Craft now offers the ART-29111D metal wheel assembly intended as a replacement for the plastic wheels in the EVANS (and 100 ton hopper) cars with the Barber type trucks.
Shown below is another example Aristo wheel hub comparison:
The ART-29111B wheel is at the left and it has a projecting hub, whereas the ART-29111D in the middle has a minimal hub projection - as does the standard plastic wheel at the right. 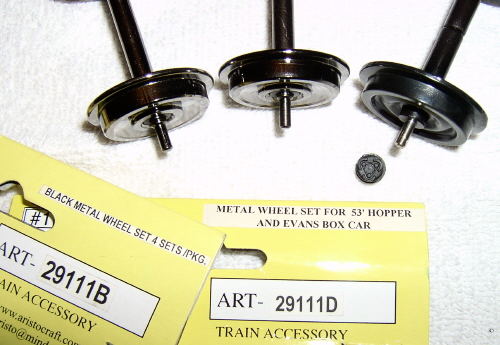 Below is shown a more direct view comparison of Aristo-Craft metal wheels with the ART-29111B wheel with its longer hub and shorter axle projection at the top of the picture.
(If this ART-29111 type wheel is used as a replacement in the Barber type trucks, you must provide for more side to side clearance to avoid rotational restriction. This can be done by either turning around the brass bushings in the side frames so that its flange faces outside, or you may counter sink a small amount of material from the flange side of the bushing.) 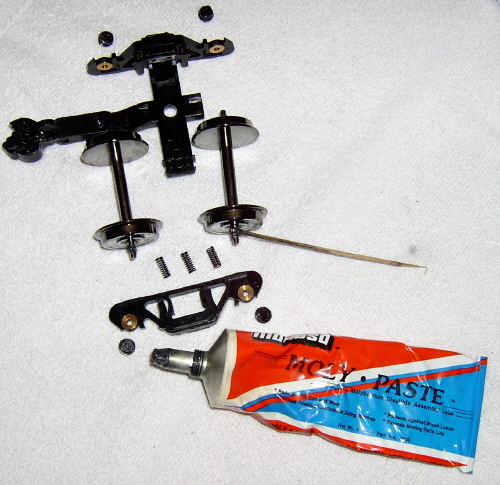 Barber truck re-assembly after lube of axles showing its side frame insertion in a depressed position - prior to spring installation. 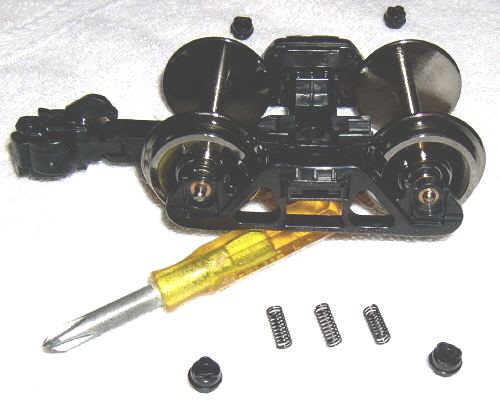 Barber truck re-assembly after lube of axles showing its side frame during spring installation.
(Using your fingers to first place the spring into its recess on one end and then a small flat blade screwdriver at the other end works fairly well to pop in the spring.)
Clean off any excess lube before reinstalling the simulated plastic bearing caps - being sure not to press them on too far so as to cause a rotational restriction of the axle. 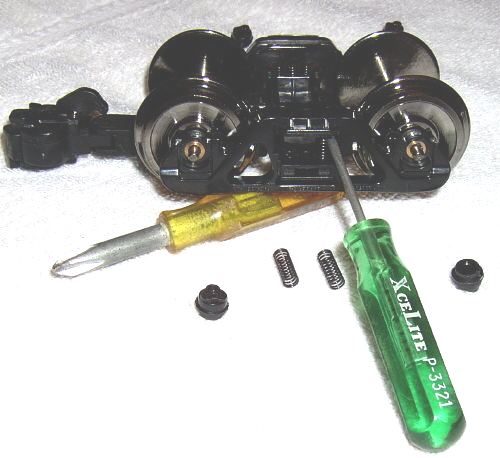 One spacer washer, .015inch thick, is used on car bolster under the Barber truck to provide for a bit of car articulation on Aristo's EVANS box cars. This is required to prevent derailments for operation on less than perfect track work. 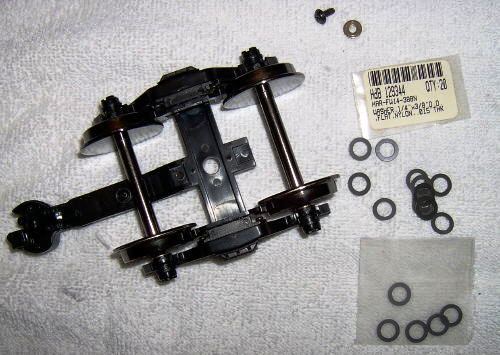 Conrail EVANS car bolster with the .015 inch thick spacer washer installed. (I located nylon type washers in a store, but a thin metal type should do just as well.) 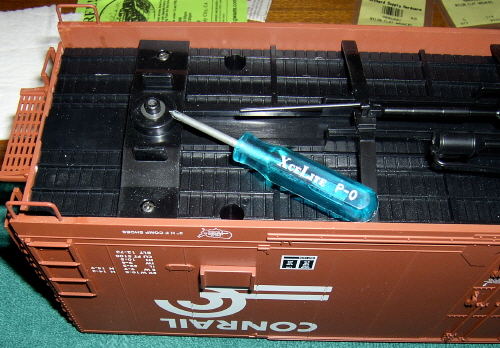 Because the extra .015 inch thick washer will raise the Barber truck above the pivot post, a small washer is also desirable to fit within the truck's recess hole so the attaching screw can be tightened without binding on the truck's bolster. (You don't need to use the extra little washer if the screw is left loose fitting, but I suspect the screw will eventually fall out sometime during operational use.) 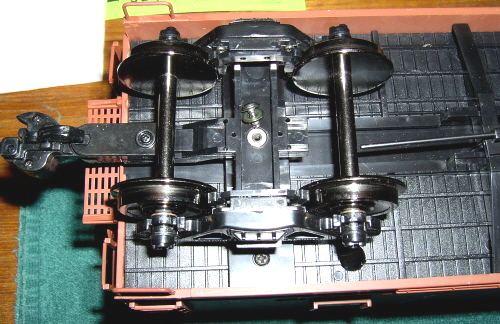 Side view of Conrail EVANS box car with lubed axles and .015 inch truck spacer washers installed.
(One would be hard pressed to tell the car sits .015 inch higher.) 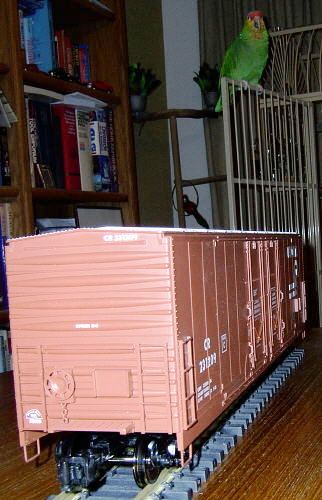 Below are measurements I made on an example EVANS car:

1) Overall length from center of Aristo knuckle coupler to center of opposite coupler = 23.5 inches.  (Note: With a scale of 1/29 and Aristo's EVANS car supposedly being a replica of a 53 foot long car calculates to almost 24 inches long.)

6) With car placed on a track the overall height from rail head to roof peak = 6.25 inches.

Aristo currently does not offer an EVANS car in SP (or Cotton Belt) livery.

Though Southern Pacific and its subsidiary SSW (Cotton Belt) did not have EVANS double door box cars they did have cars made by Pacific Car & Foundry (PCF) that virtually look like them, particularly subsequent to rebuild programs.

In the event Aristo-Craft is to offer their EVANS car in the livery of SP and or Cotton Belt or if one is to custom paint an EVANS car, consideration should be given to modeling the specific cars shown in the book as follows:

The above cars most resemble the Aristo EVANS car, particularly because of the PEAKED ROOFLINE as compared to the flat top roof line like some otherwise similar SP cars.
These cars also include the shortened height ladders, low brake wheel mounting, eliminated roof walk, and skirting extending down into the truck area very much like the EVANS cars. (The skirting does differ slightly near the foot stirrup areas where they "kick up" slightly, which a purist disposed modeler could easily alter.)