This is the original motive power system for diesels, used on all diesels, until the "prime mover" gearboxes were designed.

After the prime mover was developed, all 2 axle diesels use this motor block, except for the GP 40, which uses "prime mover" gearboxes.

This design has been used with many variations, but the biggest change is that before 1999, Aristo used power blocks without ball bearings.

After that time they have been improved with better bearings, power pickup, and overall design.

You can identify these older versions by the axles. Newer blocks have screws holding the wheels to the axles, and these screws are flush with the wheel faces.

Older style have the axle ends protruding from the wheels. There are variations with an adjusting screw at one (or both) end(s) of the motor block that adjusts gear lash.

There are about 5 versions of this type of motor block, but remember the basic construction is very similar.

The block has 2 gearboxes, one pivoting around a longitudinal axis of the motor, and the other is rigid. This allows the truck to follow track warps also. In the picture below you can see the "rigid" axle on the left and the "pivoting" axle/gearbox assembly on the right. This is a later model block with ball bearing axles. Note the universal joint to allow the motion of the "pivoting" axle.

The first version had the axle tips going into bushings in sprung sideframes, and power pickup was from the sideframe journals. Reportedly some of these had a spring and ball bearing inside the journal to press on the axle end for better power pickup. This was a pretty reliable method, and you have sprung trucks. As usual with many different manufacturers, the springing was not always very effective, the springs usually at full extension, rather than "half way", but many people swear by these earlier blocks.

This first version also had lash adjustment screws on both ends for each gearbox.

The second version of the motor block had only one lash screw adjustment, and it was on the fixed gearbox end. The shaft of the pivoting gearbox protruded from the end, so you need to look carefully to see if it is a screw or just the shaft.

The third version of the motor block has no lash screws.

The 4th version made a radical change, the axle shafts no longer went into journals into a sprung sideframe, but the axles ended flush with the wheels. There are now ball bearings on the axles.

The power pickup has also changed, but unfortunately, for the worse. There are weaknesses in the design that make this unreliable, and worse, basically impossible to repair.

There are now 2 tabs on the sides of the motor block for mounting. Wheelbase remains at 3.8" 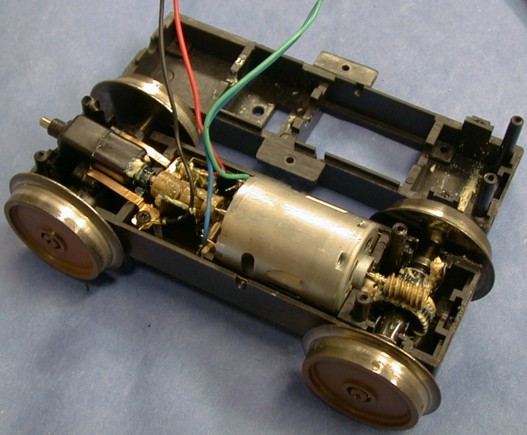 This is now sold by Bachmann (still manufactured by Kader). It appears there are some cosmetic differences, but further investigation is needed.

There's also some good info on George's site: http://www.girr.org/girr/tips/tips1/brick_fix.html but it might be a bit dated.

The 2 pin connector is for track pickups, and the 3 pin is the motor pickup.

Older locos may have a 4 pin connector.

These older blocks often had problems due to lack of lubrication, the internal universal coming loose, or the case squeezing the bearings and causing too much drag. Disassemble the blocks and lubricate. Check that the universal is not slipping on the shafts. Finally if there is still poor operation, loosen all the case screws one turn. If this helps, then shimming with .5 mm styrene is in order. Try 2 shims in the middle first. You may have to shim more of the case if tightening the screws with 2 shims causes drag again.

Older motor blocks had traction tires. These were eliminated at about year 2000, so you can tell the age of your equipment. Some of the newer blocks also seem to have traction tires.

My opinion is trade the axles out for plain ones, better power pickup and too much traction can cause premature wear if constantly highly loaded.

The power pickup for the pivoting axle consists of brass strips that go from the screw terminals into the gearbox. Unfortunately, there are two 90 degree bends right near the gearbox: 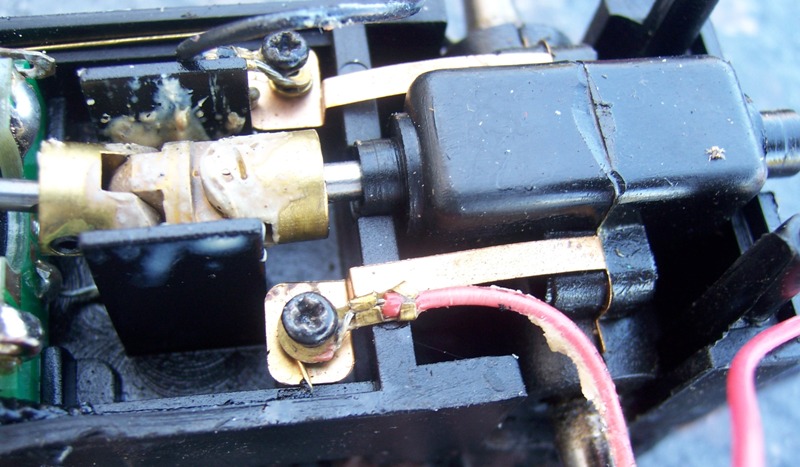 These brass strips flex and often crack at one of the 2 bends. You cannot solder them to fix this, the solder will fracture. Perhaps you could solder a wire on the strip near the gearbox and then put it under the screw. This is one of the major causes of bad power pickup in these locos.

Now, the story gets worse for power pickup on the other axle. There is a ridiculously small gauge wire that goes back to the other axle, and sits in a groove where it hopefully touches the ball bearing outer race: 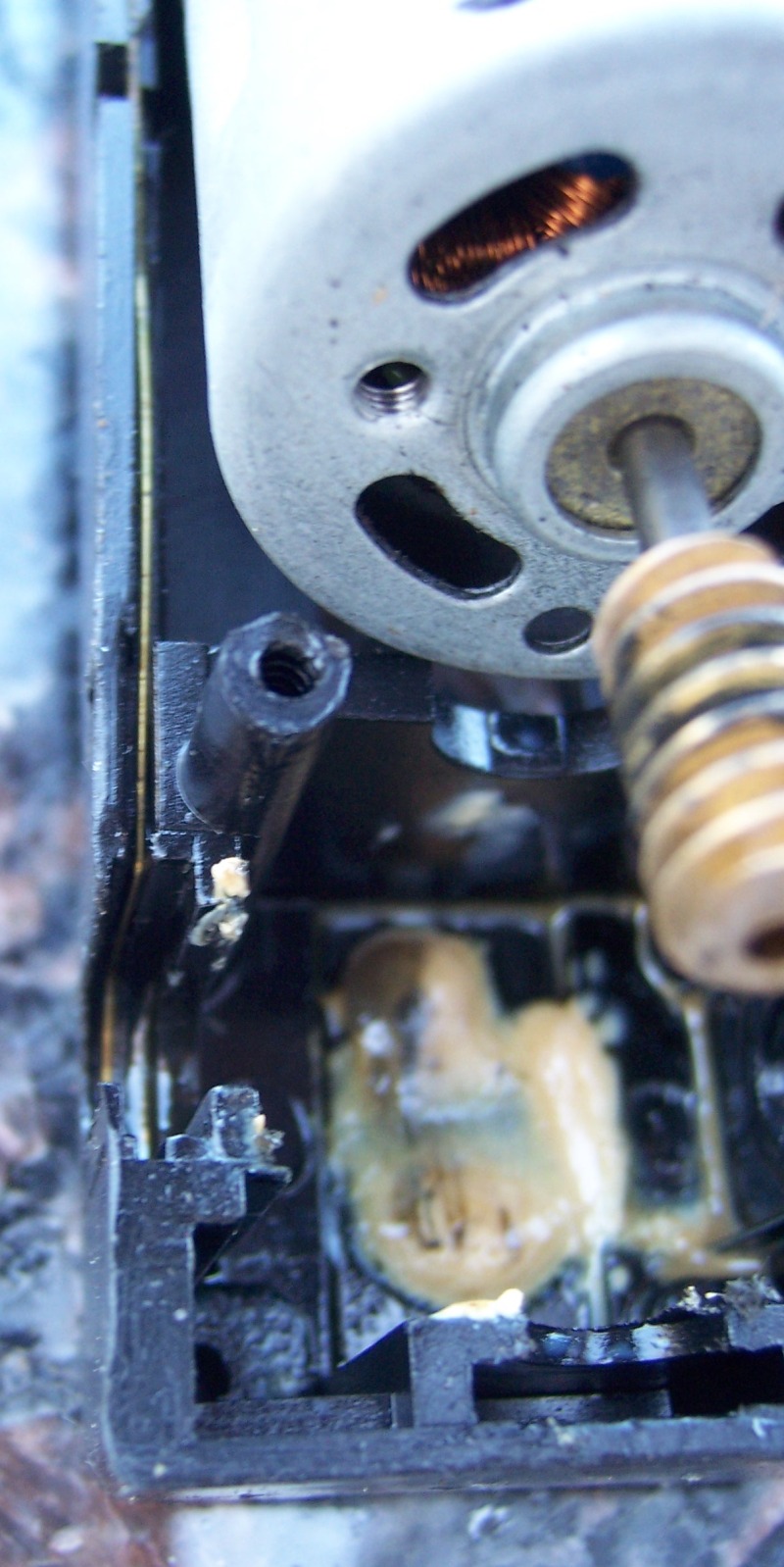 Since there is no spring tension on this connection, it eventually fails to make good contact. I suppose you could try to put something under the wire but it's really a lost cause when it goes bad. In addition, if you are pulling a lot of current the wire get hot and melts into the plastic, and no contact again. Just plain poor design.

Finally I had a near new RS-3 chew up a gear. Don't have a clue why, it never pulls anything more than a track cleaning car around my layout, but here you go:

No idea why it failed, no traction tires, and I have the very slippery stainless steel rail.

Update: I replaced that motor block, and the "new" one FAILED too!  So my RS3 is on it's third motor block.

I now understand why Aristo has been changing older locos out to the new prime mover design.

If you have a chance to get the older style motor blocks for your two-axle diesel (not counting the GP-40), don't turn your nose up at them!

Even without ball bearings, they may last you longer than the newer style.

Power pickup issues with versions 1 through 3

Ted Doskaris has a vignette, and within some issues with the pickup wires in the sideframes are addresed:

Additional views of a motor block opened, from Ted's vignette on upgrading a locomotive with an older version block to the newer motor blocks with ball bearings