This page will have misc. tips, in no particular order. There's a lot on this page, so be sure to look!

Get one, even a cheap one from Harbor Freight. Do not use test lamps, they will fool you. I won't go into why. Get one with multiple amps scales and multiple ohms scales. I found one at Harbor Freight for about $5.50 and it even has a backlight.

You need one, and there is no excuse with costs that low. Find a friend that can help you use it, ar read on

When you measure the voltage of a circuit, it's like getting the pressure of your house watering system. You don't need any water to flow, you just stick the gauge anywhere on any pipe in the circuit.

Voltage is like that, except you have to have 2 connections to measure the voltage, you are measuring the potential or difference between 2 points. If you measure DC, there will be a plus and a minus side, and your meter leads are normally black and red. Black is normally minus, and red plus. On a digital meter, if you hook them up backwards, then it usually shows a minus sign "-" on the screen, and nothing is harmed.

Measuring AC voltage, is similar, except there is no plus or minus, so you don't worry about polarity, because the A in AC means alternating. The polarity of the voltage is reversing many times a second. There is a special circuit in the meter to accommodate this.

So, to measure the voltage on a battery, put the two probes on the plus and minus terminals. If you have a light bulb running in a loco, while it is lit, if you connect the 2 probes on each terminal of the light bulb, you can see the operating voltage.

OK, this is way different, and can be dangerous, in that you have to change some wires around, and have the potential of short circuits, or damaging the meter.

Current, in amps, or thousandths of an amp (milliamps) is sort of like how many gallons of water per second is flowing in a pipe. In this case it's the number of electrons through a wire. To measure this, you have to "break" a circuit and "insert" the meter into the circuit, so that all the current flowing goes THROUGH your meter.

To use the same analogy with water, that would be like running all the water for your house or tract through a single meter. As you can see, the more water that flows, the bigger meter you would need.

You have to make sure your meter will handle the current too, some meters can only read thousandths of an amp, and if you wanted to measure the current through a motor, you might need a 5 amp capacity.

The meter documentation will tell you what maximum current it can measure.

All circuits that have power "flowing"  run in a "complete circuit", that is a big loop. You need to put the meter IN the loop.

It does not matter where in the loop it goes, because, like a water pipe, the flow at one end is the same as at the other (in gallons per hour).

Again, it's very important that your meter can handle the maximum current possible.

Here's a nice article by Dave Bodnar on how to use an inexpensive meter to do basic measurements:

Basically you want to design things so that you can isolate the power to find a "break" or short. That means if you have a loop of track, one break will not necessarily show up. First some basic concepts:

Think of your layout as a big circle like the face of a clock, and you are feeding power to it at the 6 o'clock position.

Now suppose you have bad rail joiners at 2 o'clock, no conductivity. Do the trains stop running?

Since there are 2 paths to any one point, it takes TWO electrical "failures" to stop the flow of current. This is where neophytes get really confused.

Now, suppose we get another bad connection at 12 o'clock. Suddenly the entire section of track is dead from 12 to 2. Fixing either location does indeed provide power again BUT you STILL have a power problem at the other location.

The point is that you may have several bad connections, but not realize that they are there because you have wired your track in a loop. Often this results in slow running trains or weird behavior when a train crosses a "bad spot" and temporarily helps restore power around a bad connection.

How to test for bad or weak power connections

I have built a high current load to help isolate poor conductivity problems. Measuring voltage with no load on the track will not show where problems are. Why?

Basically a poor conducting area or joint is a resistor. The voltage across a resistor is proportional to current flow.

So, many people go out on their rails, and measure the voltage and everything looks fine, but the problem will not show up because there is no current being drawn. So, by Ohms law V = I  * R  (Voltage equals current times resistance) if the current is low (no load) then even if you have resistance, the voltage drop will be very small.

So, to be able to test easily for bad connections with a voltmeter, you need a significant load at the "far end" of a powered track and then you can easily check the voltage on either side of a joiner.

If you think about it, to get a 5 amp load (to simulate a train) at 24 volts, this requires a 4.8 ohm resistor. But you need to consider the wattage, which is I * I * R, which is 120 watts !!! Pretty darn hard to find really big power resistors.

Luckily almost 25 years ago, I came across some, that I was going to use for audio amplifier testing: 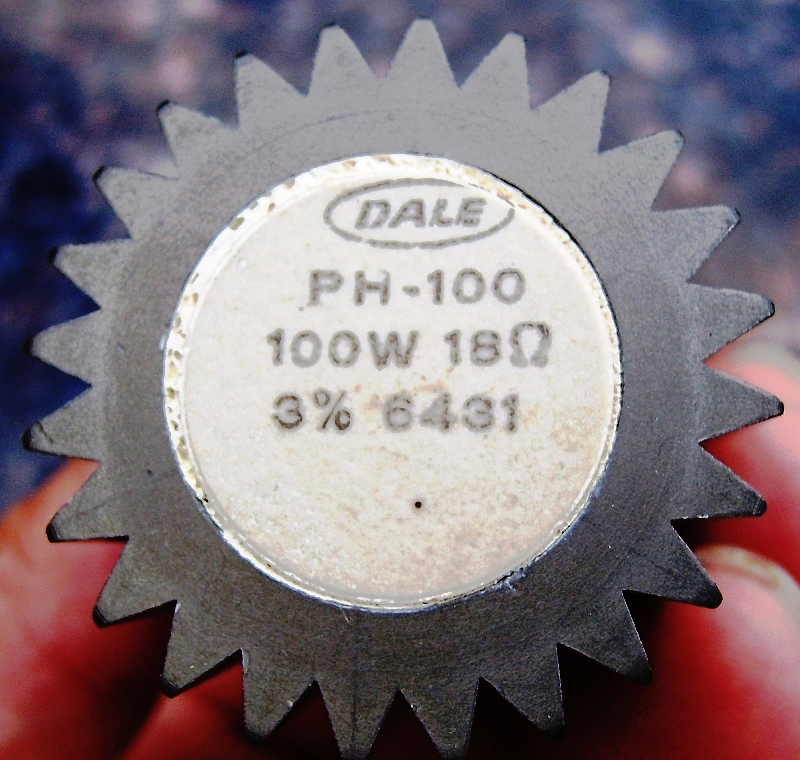 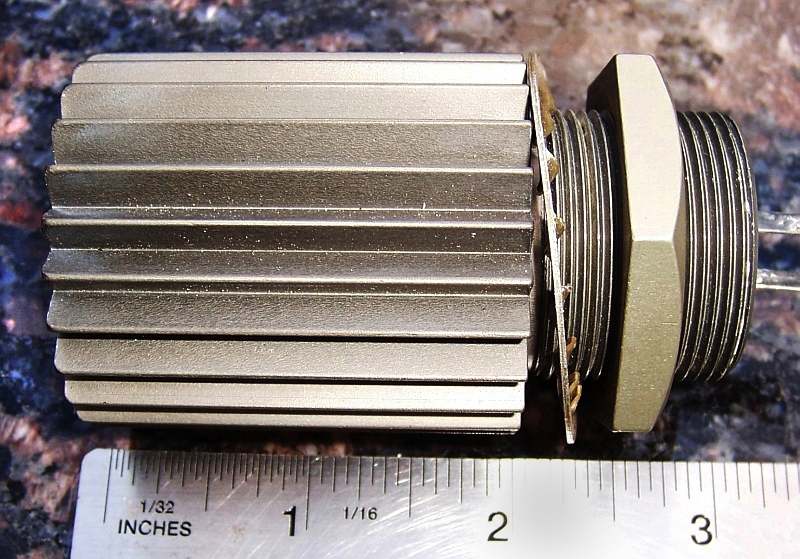 They sure aren't small!

I made up a unit putting them in series and parallel to be able to give me 200 watts at 2.25 ohms, which on my track voltage draws about 10.6 amps.Each resistor dissipates under 30 watts, so well within the 50 watt working power for a 100 watt resistor. Note well: the entire assembly will radiate 225 watts, it will make heat, just not burn you. Cliff Jennings came up with a less expensive alternative, by using three 24 volt light bulbs in parallel. He also used thermistors to limit the surge current so as not to trip the breaker on a supply: Setting up a workbench NOT to short out!

Some simple advice and techinque to avoid melting stuff down on your bench.

I've done this once and so have a couple of friends:

Set up a piece of track as a test track on the bench, and then clip power to it with alligator clips. OOPS! I clipped my DCC power and a programmer up at the same time (they all had alligator clips), forgot to unhook one!

Solution: standardize all connections to the same type of connector AND power sources have one "sex" and devices that must be powered have the other "sex".

My standard are the inexpensive 2 pin connectors made famous by Aristo. Long ago, talking to electrical contractors showed the wisdom that the connector that has power is the one WITHOUT exposed pins:

Below, a QSI programmer (power source) using a female connector: So put the above type ("sex") on anything that makes power.... transformer, dc supply, DCC feed, programming outputs.