A nice looking model of the prototype. I purchased two.Santa Fe had these in two colors, the blue and yellow, and one I will paint in zebra stripe. The former paint job is available from USAT, the latter is not, so I purchased an undecorated one. USAT part numbers R22151 to R22160, never figured out the undecorated part number.

They still come with traction tires. Try not to break the bell glued underneath when picking it up (don't ask me how I know this!). 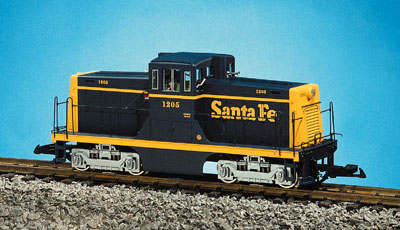 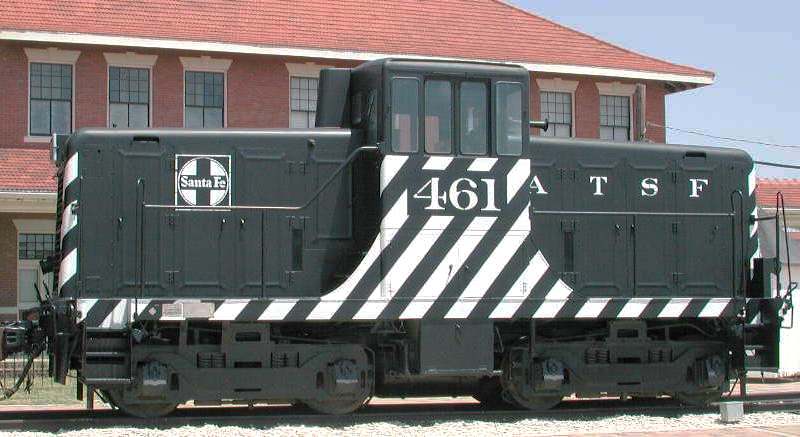 In 1937, a new rule went into effect that both an engineer and fireman were required in any locomotive over 90,000 pounds. General Electric came up with the 44 ton loco to allow railroads to save money with a loco that only required an engineer.

There was a truck-type V8 under each hood, of 150 to 205 horsepower, each powering it's own generator, and the traction motors on each axle. Often these locos ran with just one motor running. The front truck had the low voltage generator, so if only using one motor, this is the one used. Usually chassis marked with "F".

They were built in 5 phases: 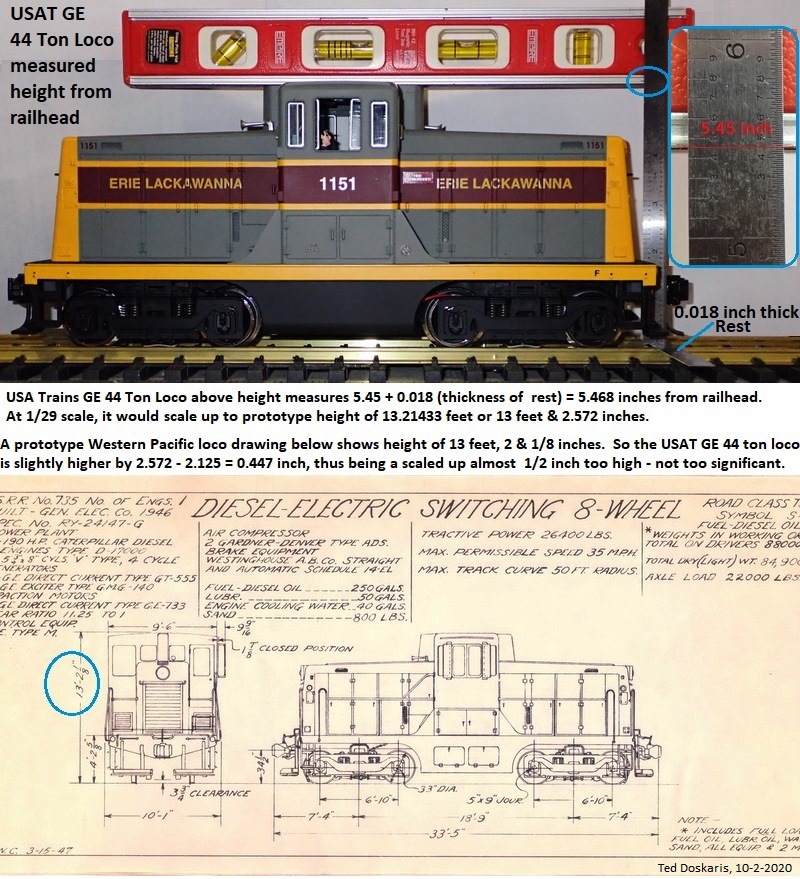 Preparing them for my layout:

First, as usual, replace traction-tired axles with "solid" ones. In this case, all axles had traction tires, so had to buy 4 for the 2 locos.

I put all 4 new ones on the blue and yellow unit. As usual, not gauged properly, I set to 1.575 back to back. Interesting, I use my press to press the axle a bit on the wheel, I do not want to put any pressure on the plastic center, and these are all much easier to press and adjust than the F3's.

Now, take the 2 axles I removed from the undecorated one, and the 2 from the the blue and yellow. EVERY axle is split on at least one side, and several on both sides! Well, must have gotten an old one, or the gear casting (which is different than the F3) is slightly smaller and more prone to splitting.

Take out my brass collars I got from Tony Walsham, and put on the split ends. Surprise, they are a slip fit. Rats. But putting the axle back in makes it good enough, i.e. inserting the half axle expanded it enough to make the collars useful. OK, sigh of relief, now reassemble the trucks.

Wait, something is wrong! The axles don't seem to sit down in place. Further investigation, gears are not meshed. Final investigation: part of the motor block is touching the axles, now they have increased in diameter from my brass collars.

I had to dremel out some clearance in the loco. Completely disassemble and wash out the Dremel "dust".

Will use QSI Titans with a Winton sound file, perfect.

This motor block is similar to the other 2 axle motor blocks, except the rectangular slots for the axle bushing are bigger than needed. This makes the alignment of the bushings when reassembling even MORE difficult.

Be sure you use the rubber band method to assemble/disassemble the axles, paying particular attention to the axle bushings

After the axles are in place, be sure to give a little rotational motion to the wheel/axle to be SURE the gears are meshed... if they aren't you will feel it turn a bit and then drop down and engage the worm (the gear on the axle is the worm gear, the gear on the motor is the worm).

Be sure your "whiskers" are on the axle between the bushing and the gear casting.

Now gently put the gear cover on... it should slip on with no friction and seat easily with no gap between the gearbox and cover, if you find any resistance, STOP and check things all over again.

Interestingly, one of the few (if not only) USAT locos with truck mounted couplers. Weird.

There is a simple mount for the Kadee 831 available.

Here's the modification drawing from the Kadee site: 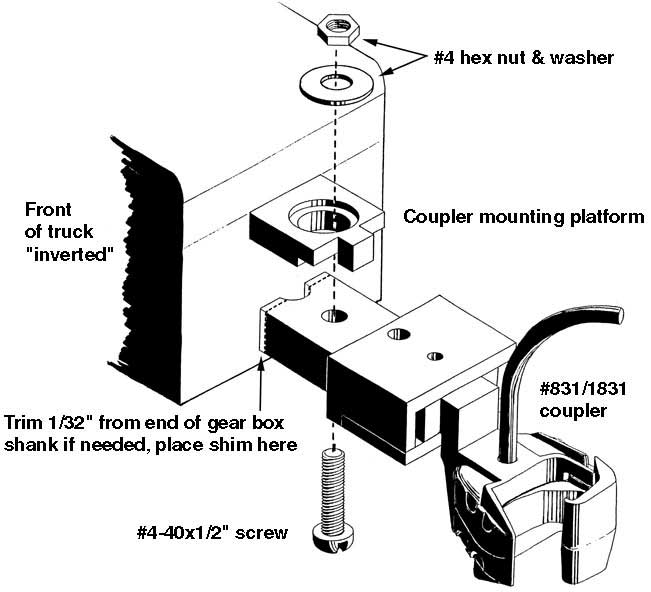 I have the following tips:

On trimming the gear box, don't try to measure it, get your 4-40 screw, put it in the coupler gear box, take just a couple of swipes with a file on the end of the gear box, and then test fit. Keep taking a little bit at a time until the screw is not quite perpendicular. Don't cut any more or you will have a loose coupler.

If this happens it puts an angle on the gear box, and then puts the coupler at the wrong height.

I prefer to use centerset Kadees, and body mounted, and Camarillo Pacific is in the process of a kit, which will also help fill up the overly large hole to clear the truck swing. 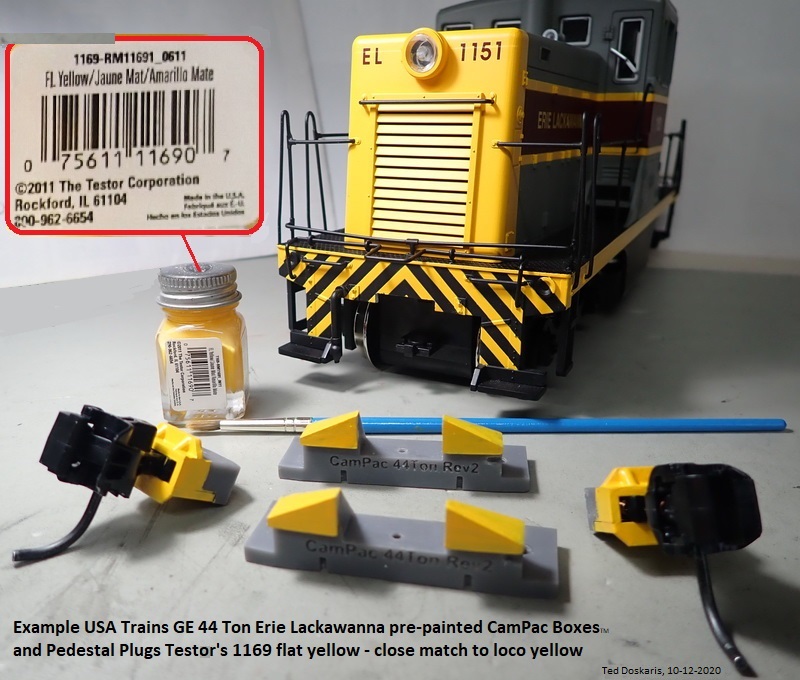 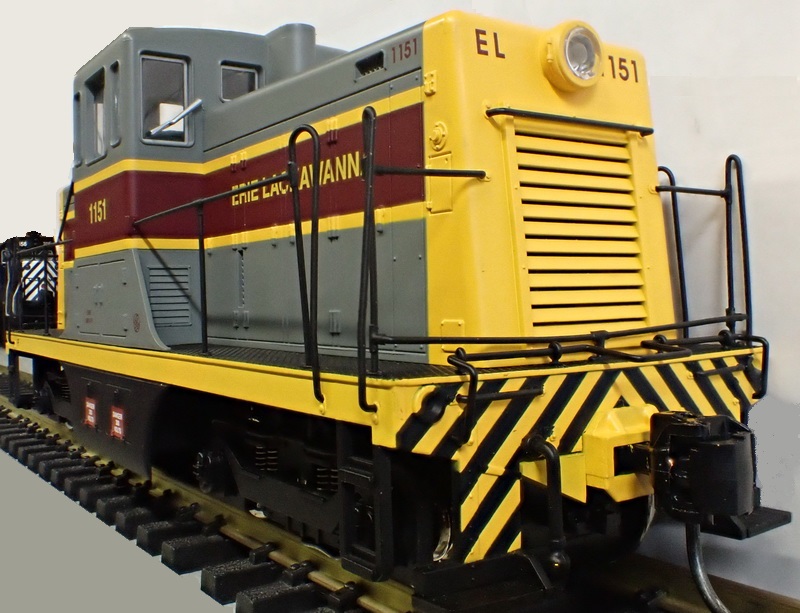