This is a nice looking model, but many people have issues with them, so read the suggestions below. Many people complain about derailing.

This is a long model, and has a lot of overhang, so I also use this as a "clearance" test, both on the outside and inside of curves.

Note: As of August, 2010, the longstanding RDC-1 was joined with a new RDC-3, which has completely different internal wiring, and an interior!

Notice that Ted has a vignette on the RDC, CLICK HERE.

Swapping out the traction tires:

In general I don't like are the rubber traction tires. They rot, need replacement, and reduce power pickup. In the case of the RDC they cause operational problems.

What happens is the wheel with the traction tire pulls the loco more than the wheel without, and the wheels tend to actually climb off the rails in curves. Normally you don't see this in most locos, but the extra length, and sensitivity to cross level really shows up in the RDC. Also, since they normally run alone, there's really no need for a traction tire.

So my advice is swap them out for "solid" wheels. They are easy to change out. You need 4 wheels, which will be two of Aristo part number29130 (package of 2 wheels).  These are labelled as "FA1 PLAIN WHEELS W/O GROOVE & TIRES WITH HEADER CARD".

To replace the wheels, you put the RDC on it's back, and remove a side frame. There are 2 small screws. They are in the 2 holes below the springs in this picture. It helps to use a magnetized screwdriver.

Then remove the screw and star washer on one of the traction tire wheels. CAREFUL! The start washer WILL try to get away! If it drops under the truck and you do not see it, it may be sticking to the top of the truck, since the magnetism of the motor can trap it. Just be very careful not to let them get away.

I have a wheel puller that will just fit here. Turns out that the action of putting the puller under the wheel popped it off.  If you do not have a wheel puller, two large flat-bladed screw drivers on either side of the wheel will pop the old wheels off. This is a lot better way to do it as opposed to levering 2 screwdrivers between the motor block and the wheel.

I have my finger on the wheel, because, just the action of putting the puller in popped it off. I spun the new wheels on the axle by hand a bit to feel confident they were matching the taper well, knocking off any high spots in the wheel casting. Replace the screw and star washer, and then the sideframe, being careful to try to find the "old" threads in the motor truck, since these are such small screws.

According to the Kadee site, the 901, 907 and 789 are recommended. There is no further information or detailed installation information.

Removing the stock couplers is easy, remove one screw for the long "centering spring", then remove the other screw that actually holds the coupler: 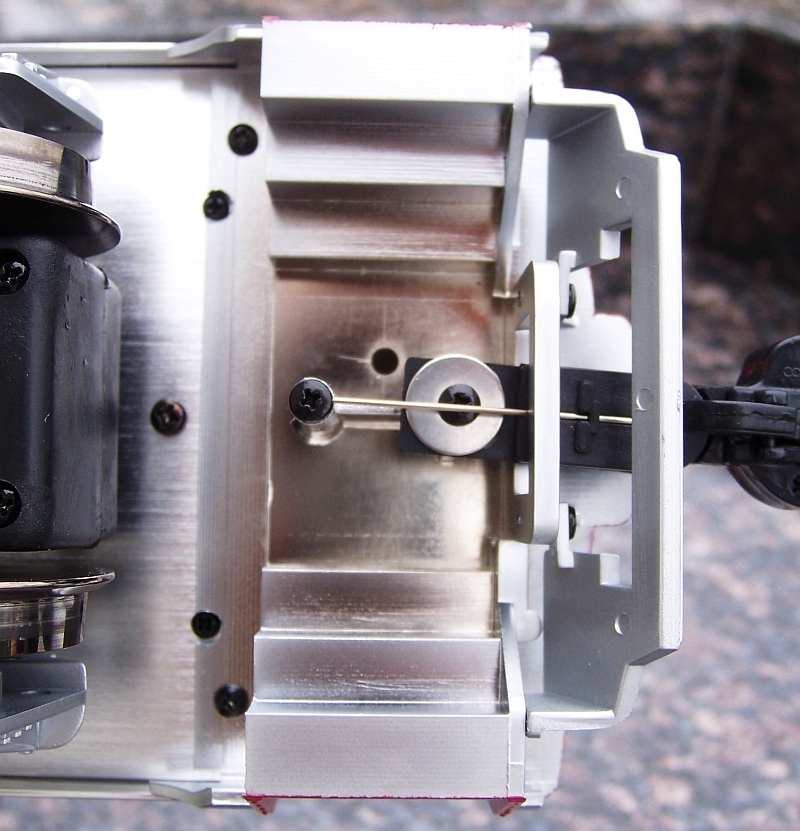 For the coupler, you need to drill a hole slightly offset in the Kadee,I "painted" the hole red to avoid confusion. Use a drill the diameter of the original screw, about 0.1" 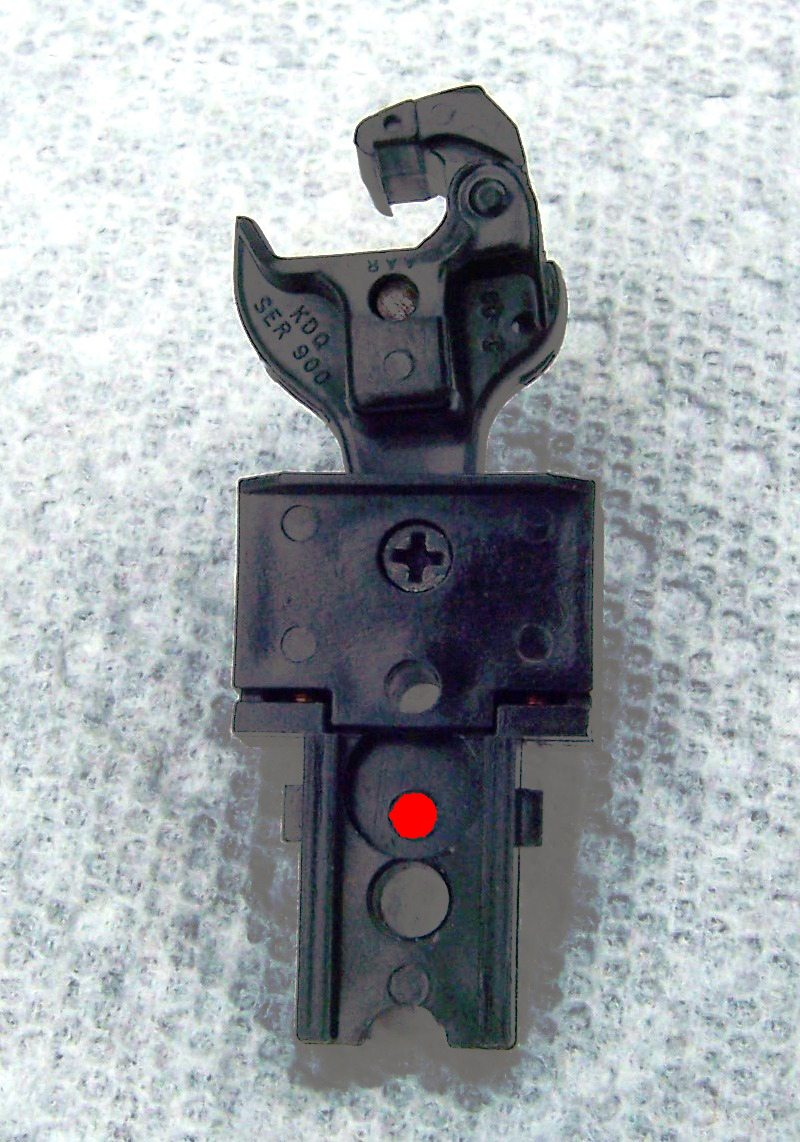 The coupler height comes out perfect: (well maybe a touch low, maybe I'll go back in and trim a bit from the post) 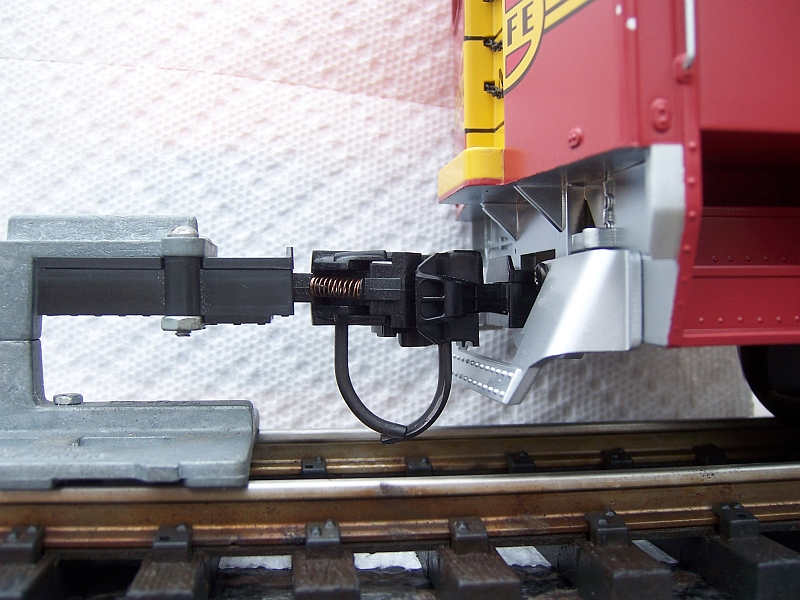 Disassembly: (differences between RDC-1 and -3 noted)

Remove the car ends first, there are 2 screws on the bottom of each car end, and one very tiny silver screw in the roof. Try very hard to find drivers that fit these screws as closely as possible, the 2 screws underneath are under a lot of tension since they screw into the aluminum chassis. The small one on top can strip the head easily.

Herei's the two cap screws underneath, near the coupler: Here is the small screw on the roof, it's near the horn: Once you have the end caps off, let them dangle carefully, there is not much play in the wires. Here's what you see looking into the ends of an RDC-1. The cardboard aids the diffusion of the lighting. I decided not to try to reach through this, but to take it apart the rest of the way. The RDC-3 has an interior. This is the time to "untie" the knot of wires in an RDC-3. Now there are 6 screws along the sides of the chassis, somewhat small. Again these are into metal, so get a good fitting driver. You can see two of them between the square battery boxes and the air tanks, right at the edges of the chassis: (again an RDC-1)

Support the whole thing carefully, since the end caps are loose, and can get scraped up by the chassis and shell. Pull the chassis out a bit and you can get inside.

Try not to whack the lights inside. When you put this back together, try feeding the speaker and smoke unit lights into the hole in the cardboard as you bring the chassis to the shell. This ensures the wires do not knock the lights around.

When reinstalling the compartments, tighten the screws GENTLY, otherwise you will snap the slotted tabs off.

If you need to access the speaker connector, it is under the other engine compartment box. you will see 2 connectors, the 3 pin one is the standard connector for the speaker used by Aristo on other locomotives, only the outside 2 pins are used. The 2 pin connector is paralleled with the motors.

So there are 2 ways to get the speaker wires down to the decoder.

When you are inside you can remove the MU wires, in this (poor) picture, at the far back left, you see 2 solder pads and black wires, that's one mu cable.

On the right side at the back, behind the bulb, you see two more, that's the other mu cable. I remove them since I don't use them or want to look at them, or have them snag on a switch.

Again, the speaker wires come down from the top, and plug into the board, just to the extreme right in this picture, you can just barely make out the plug with the back wires. Pull this plug from the board.

Now thread this wire and connector down to come out next to the Aristo socket. Button the chassis back together. You can see the wire and plug from the QSI and the speaker wire you threaded through in this picture: Now use 2 short pieces of wire, like 1/4 watt resistor leads to "jumper" the QSI speaker plug to the 3 pin Aristo speaker plug.

Notes on the prototype:

The RDC had 2 Detroit diesel motors, each powering only the outboard axle. The transmission was by Allision. There was a "TwinDisc" torque converter with lockup. Apparently the lockup was at about 55 mph. It's not clear yet, but it seems that by alternately pressurizing the 2 torque converters, this gave the equivalence of 2 gears, and the torque converters allowed the smooth transition in speed and obviated the need for a clutch. (The torque converters essentially were variable ratio transmissions like the old Buick "Dynaflow" transmission".

More as I research further.

Matching the sound file to the prototype:

I'm experimenting with a new sound file from QSI, that simulates the automatic transmission, the prototype had a torque converter.

First, the momentum and the notching CV's have no measurable effect on when it shifts gears.

As usual, I have the jerky/shaky startup and had to play with some parameters.

My start speed came out at 8.

the horn and the bell sound nice

The prime mover volume is way too low, I raised the master volume to 127 and still too low, the air pumps and the fans can drown it out.

Pete Eggink has done some neat stuff with his:

Basically he lowered the car, rotated the underbody detail 180 degrees to match the prototype, modified the air tanks.

I copied the below from the internet wayback machine. Pete, I'd like permission to post this, but we cannot find you!

If you do this, you will basically have the car running opposite to the directional lighting, so you may have to reverse the motor leads inside.

From Jeff Cairns: "I sort of went crazy with mine, and ended up making aluminum leaf springs to prevent derailments! The springs go between the chassis and the truck's A-frame, thus enabling the car to rock side-to-side. They can actually handle 4 foot diameter turnouts at full throttle now!"

the pic processor used for the voltage regulator is a PIC16C620A