This page is under construction. The information I have gathered here is a compendium of what I believe to be correct, and some information comes from the manufacturer. I intend to personally try one out, but until then this page has these caveats. 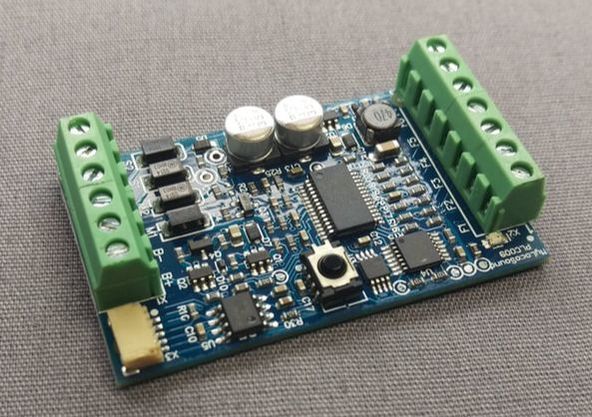 This appears to be one of the most popular non-DCC sound systems, and is inexpensive. https://www.mylocosound.com/

Sold worldwide, especially popular in the UK and the USA & Canada (I think popular in Australia and New Zealand).

In large scale, there are the following sound products:

Within each product, there can be several whistles, for example the British steam has 9 different whistles.

There seems to only be one bell on each product.

There are 7 trigger terminals, for remote operation.

System is rated for 8 ohms 3 watts max, and you are informed a 4 ohm speaker can overload the amp if run a while at high volumes. Interestingly, this is one of the few sites I have ever read that guides you to a speaker with a resonant frequency of under 500 Hz, and optimally under 350. (for my steamers I try for 200 and under, but it's all about space in the tender).

To trigger the sounds from DCC he recommends a servo switch, driven from a servo output on the decoder.

The manual goes on to say: "Manydecoders also have function outputs which can be used to trigger sounds. However, this is technicallydifficult and you should only attempt it if you are very familiar with your decoder and the setting of CVs."

Since these function triggers just need to be pulled to ground, I am at a loss why this is difficult, and why you need to be "very familiar", at first glance it appears a simple connection to the function output of any DCC decoder would work.

It does appear that the MLS card can run up to 24 volts.

It has an interesting way of programming, to make things easy for non-technical users, it uses an IR remote like on a TV to change things.

There are 4 "variations" on this sound:

Clearly, the "tickover rev rate" is adjustable, and for case 1 and 2, the user can set the rev rate limit while in motion