I bought 4 of these, and some run great and some run crappy, and the funny thing is some run fine in reverse but jerky/surging in forwards.

Also experimenting with different decoders in them

Most of the information below is courtesy of Dave Stubbs.

Re: poor running : I asked about running poorly in one direction, and Dave replies: As far as the direction problem I agree it is more than likely a gear problem. the worm gear has 2 plastic bushing on either side of it. the center one keeps the shaft from pushing into the motor. if the shaft has not been cut right and is too long it will push on the motor making it run slow. when reversed that same worm gear is now pushing on the outer bearing and if the other shaft is correct it will not bind the motor and run faster.

Once you remove the shell pull the circuit board off. you can now see both of the worm gears from the top through the seam. take a needle or anything small enough and see if you can move the worm gear front to back. they both should move a little, easily. take note if one seems to move less than the other as that is likely the problem child. go ahead and split the frame. now you can really see how much play is in the shafts. with the motor in place and the shaft inserted into the flywheel, place the bushings in there cavities. Once there the worm gear should move freely back and forth about the same on both. I've had to sand down a couple of shafts to get the play back but it worked on both. the plastic piece that slides into the flywheel will move but it is tight just don't bend the tabs. also look at motor shaft in the flywheel I've had 1 that the flywheel was pushed on too far. as long as it has the same play as the other shaft you should be good.

Shell removal can be a bit tricky. You don’t want to pull on the trucks too hard or they just pull out. This will start to damage the tabs holding the trucks on. The tank doesn’t help much either as it is only held on by double sided tape. I found the best way for me was using the smallest flat blade screwdriver I have and insert it in between the shell and chassis at the middle rear of the engine as shown in the picture below. 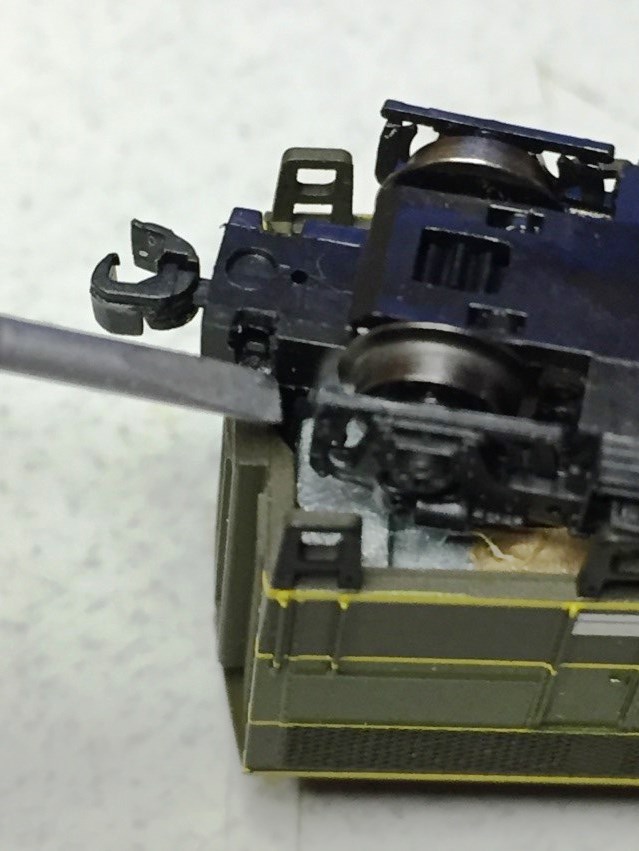 You must be careful not to put the screw driver at too steep of an angle or you can damage the shell as shown below: 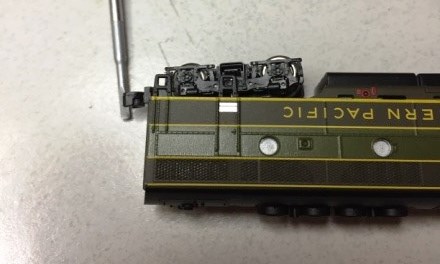 Just keep going. If the screw driver slips increase the angle. It will take around 10 times and the rear will pop out. Once it starts it moves very easy 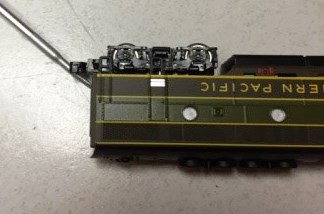 With the back end "popped out" as shown below, the chassis will almost fall out. 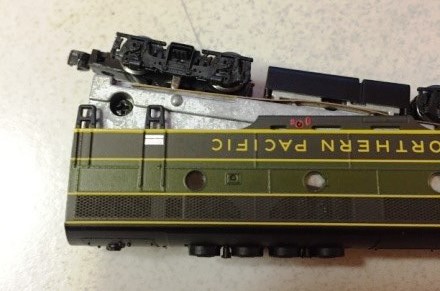 Next take a good look at the contact point from the chassis “whiskers” to the truck contact pins. Make sure the pins aren’t bent and make good contact when rotating the trucks. Hold the engine with trucks facing down and lightly push upward on each truck keeping an eye on the wiskers movement. They should move freely up and down. 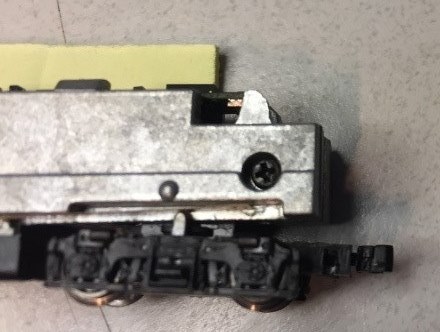 Remove the circuit board by gently lifting the back of the board and sliding it back. Be careful of any electric parts under the board and do not let them get damaged by the 2 posts that keep the board in place. On the stock board there are only 2 resistors but of course DCC boards have more components.