This is a nice looking loco by Aristo. It is one of their earlier designs, so you will see more parts and somewhat more detail, and has a lot of small parts and subassemblies. The pilots are complicated as well as how the hoods connect to the cabs, there are a lot of circuit boards, and 21 screws to remove the shell!

The loco is 21.5" long pilot to pilot, 3.56" wide at pilot face, and 5.89" high at cab roof. It is a long loco and the couplers are body mounted. There is quite a bit of coupler swing, so if you have tight curves, stay with truck mount couplers for the first car connected to the loco. You can also find aftermarket couplers that have more side to side swing.

There are 5 versions, counting various changes in electronics and drivetrain.

Electronics went from point to point wiring, to early circuit boards to culminating in the usage of the Aristo socket.

All mechanical versions run well until you have wiring problems in the trucks. There are design weaknesses that usually result in power pickup issues, and melted motor block housings.

Regarding the drivetrain, these are the standard 2 axle motorblock used in many locos. Earlier versions had sprung motor blocks and the axles ride in the journal boxes. The newer versions have unsprung ball bearing motor blocks. The axle terminates at the outer face of the wheel. Click the link for more detailed information on the motor block.

The pilot is hard to pull apart. There are 4 screws that must be removed from behind, and it's very difficult to get to 2 of them without removing the motor block, which means removing the shell.

A common problem is the pilot assembly pulling apart. I was trying to figure this out when I finally pulled one completely apart. I had successfully changed to Kadee couplers without taking it apart.

First I learned that paint was what was fooling me into thinking I had not removed enough screws. The front part of the pilot will pull away from the loco if you remove all 4 screws from the inside. Then the handrail supports will come off, you have to pull up the outside "bars" out of the platform floor first, then the part slides off. This is also half of what secures the small "gangplank" that folds up or down between locos.

I finally found the reason this assembly is often half apart, the 4 screws that secure the parts together do not engage enough threads to hold hardly anything. The #4 screws are .3" long, but only .13" engage the front pilot housing. The holes are over 1/2 inch deep. 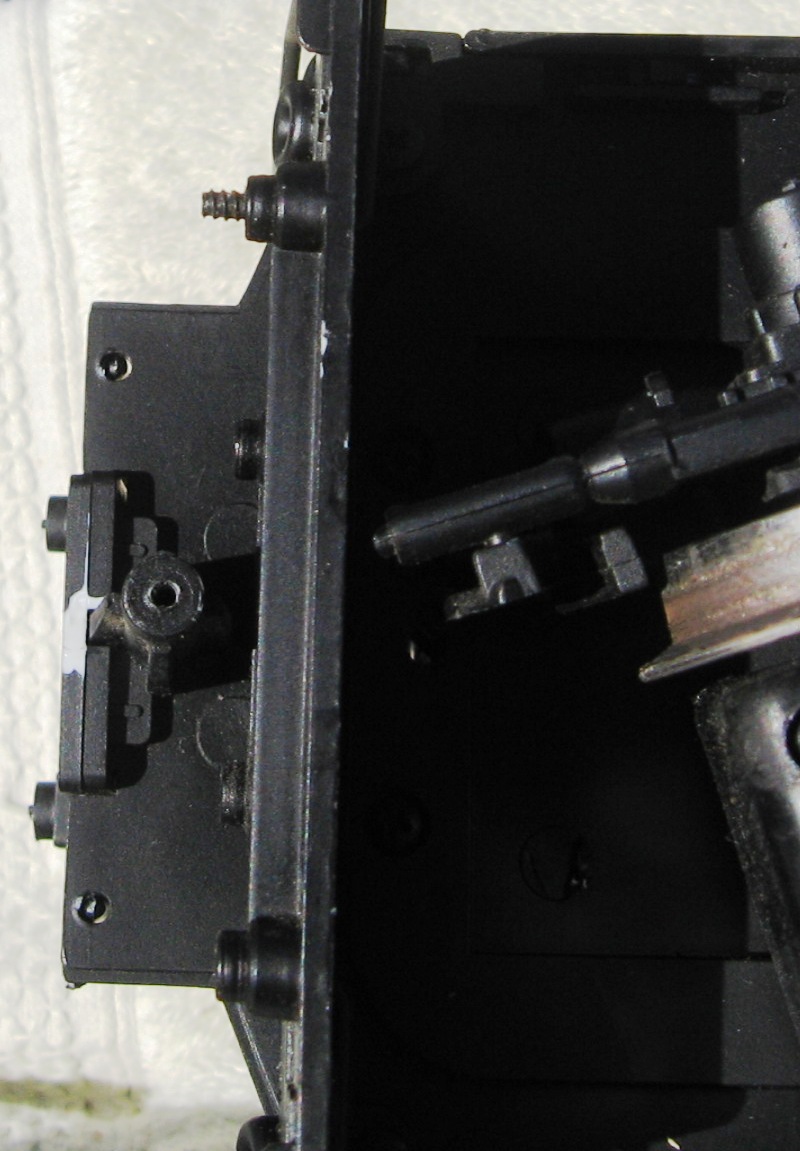 So, just put longer #4 screws in these 4 positions. Due to the small diameter of the plastic bosses, I would not recommend using any larger diameter screws, you would probably split the plastic.

Preventing derailments/shorts from melting the main board.

This situation is actually applicable to all track powered locos. What often happens in a derailment at a switch is one truck has the correct polarity on it's wheels, and the other truck gets the "wrong" polarity applied to one set of wheels. This is from one set of wheels touching a rail of opposite polarity due to the derailment.

Now what happens is you have a short circuit from one set of wheels to another, and either the wires melt or the traces connecting the front and rear trucks burn up: This board was burned by a derailment, then repaired then another derailment burned the other trace!

The solution is to add Polyswitches to all track pickup leads, so that a short between trucks does not vaporize the traces on this board

Speaker versions and waterproofing - not!

The RS-3 comes with a speaker preinstalled, it is in the top of the long hood, facing upwards, behind a grill: 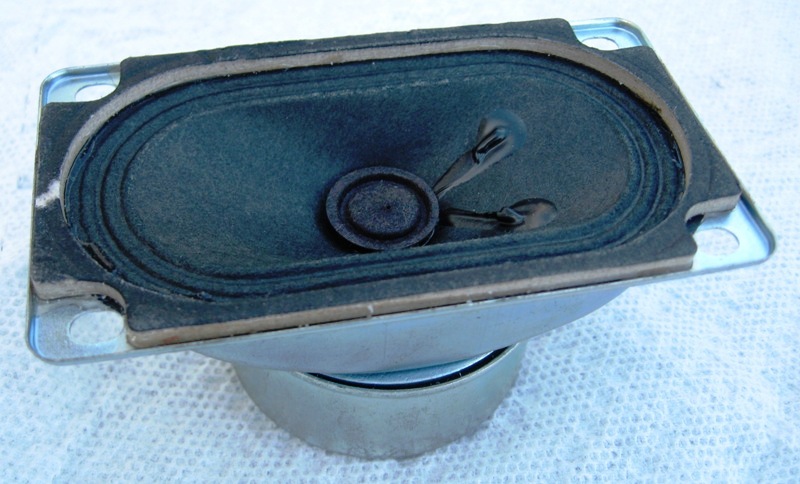 The early units had a smaller magnet. The later versions look like the picture below. If you have an early version, it's worth it to upgrade the speaker, it is a common size. 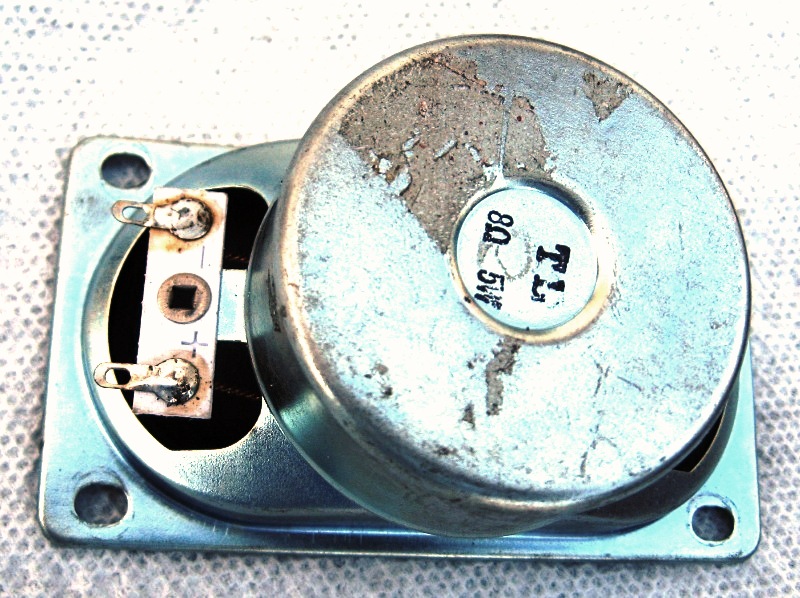 By the way, no matter what Aristo says, the speaker is NOT waterproof or even water resistant. I left my loco on the track when the sprinklers went off, here's the result: 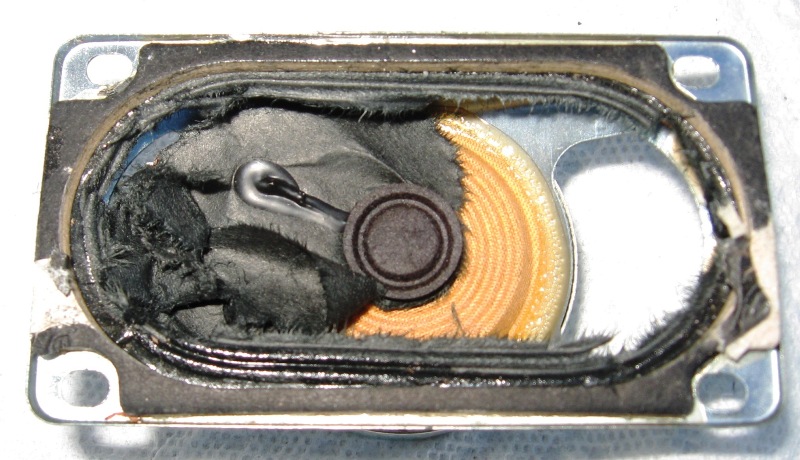 The cone just sort of shriveled up into a ball! Moral: don't get it wet!

From looking at the Kadee site:

Note: all of these coupler conversions use are a "medium offset" coupler. As I have gained more experience, I only use centerset couplers now, since the offset couplers force the couplers to deflect under tension (and compression). Kadee uncoupler bars will catch on switches if they are deflected too much, and the couplers will also override easily.

Therefore I recommend trying to avoid this Kadee solution unless you cannot.

Kadee's recommended installation: (not my recommendation)

Ok, so I figured I'd try it per the Kadee instructions. I used the 787 since I have 10' diameter minimum. The instructions just tell you to take off the old coupler and install the Kadee. HAH! You cannot get the old coupler out, and if you could by prying, you would probably break something.

Well, the 4 screws that hold the front pilot together have to come out. The ones closest to the chassis are pretty well impossible to get to, and I did not want to run a screwdriver on them at an extreme angle.

So out come the 21 screws, shell off, then 2 more for the motor block, you can then unplug the 2 plugs and get the motor block out of the way.
Take the 4 screw out of the back of the pilot, and it comes apart, all 6 steps fall out also. It might be on tightly, so a screwdriver down inside will pop it loose. Be sure to unhook the handrails from the pilot so you don't bend anything. Note: these 4 screws strip easily, be careful to not overtighten. Mine came stripped from the factory, when I pulled them out the first time, there was plastic filling the threads on the ends of the screws.
Then the Kadee instructions for installing the coupler are fine, except, you put the Kadee through the hole in the pilot, then screw the coupler to the post, and then reassemble the pilot.The instructions come in the 787 package, they are not on the Kadee site. Basically, you trim off the end of the draft gear until the large round cavity in the draft gear can go over the coupler mounting post. They say this is about 5/64" of material, I recommend you cut some off and try it, until you get exactly the right fit.
The right fit is snug, with the rear of the pilot assembly, not pushing it excessively, and not loose. Now you drill a 3/32" hole in the cavity to allow a screw to go through it. Note: this hole will NOT be centered in the cavity, but towards one end. Take your time.
The good news is that the coupler is at exactly the right height.
Click here for the Kadee installation sheet

I will look into how to fit centerset couplers to an RS-3.

Ted has a vignette talking about using his universal metal coupler box: