PLEASE READ THIS STUFF! I've put things here that are not in the manual, or "gotchas" that are not obvious. Trust me and save yourself a lot of grief (that I went through!!)

Note that my QSI pages are tightly focused on the G scale decoders, the "Revolution" sometimes called the "Magnum", and the newer Titan.

There are THREE products: TWO software and ONE hardware/firmware (the actual physical programmer/dongle)

The QSI LS Titans were evolving at the time that QSI Solutions went offline. Many new CVs were added to further enhance sound, especially for steam locomotives. To get menu driven support for programming these CVs, you need the Quantum CV Manager that has the "engineering" menu with the "ASR chuff" sub menu. After QSI Solutions left the scene, QS Industries apparently dropped support for these CVs in the CV Manager 3.1.x.x and beyond.

So to use all the features of the G scale Titan with the latest chuff and other "tweaks", first install 3.0.0.0 with the installer executable, then overwrite the installed exe file with 3.0.0.18 (this is a program file only) in the program directory where it was installed.

QSI Solutions is out of business, but the web site is still up as of early 2021:  https://shedaker.wixsite.com/shedaker

The QS Industries site is: http://qsindustries.com/  but no G Scale downloads, nor even the Upgrade program or the CV Manager program. Very weird.

There is a groups.io forum with some files: https://groups.io/g/QSIndustries/files but not all the software is there.

I manage a groups.io forum, where I have uploaded the program files: https://groups.io/g/QSI-Solutions/files you will find the programming files there. If you need other files, or sound files, post on the forum. Yes you have to join.

If you get stuck, email me, but be sure to read the sections below on the CVManager and the Q2upgrade/QuantumUpgrade programs below.

This is the hardware that actually does the controlling and programming.

On this end, you can see the red LED, green LED, and the programming connector (to the decoder).

The other end has a standard USB type B. 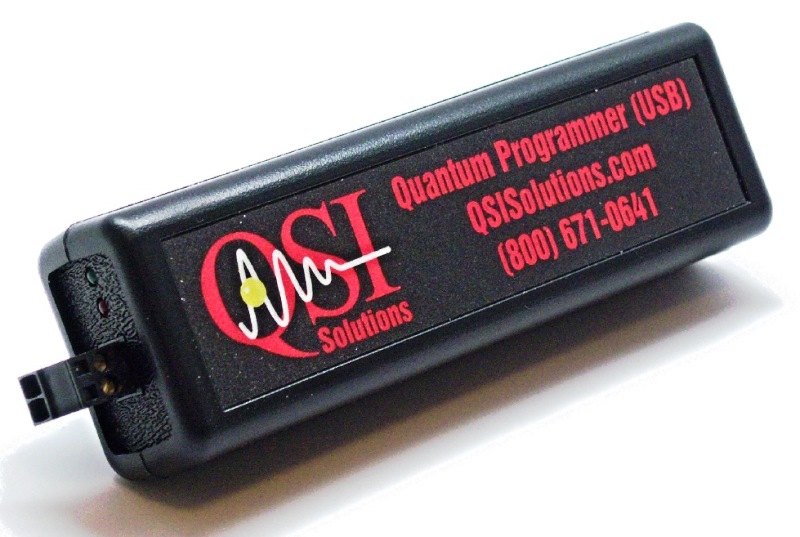 I don't know the working voltage range, but 15 volts has been the target voltage from the QSI engineers.

The programmer on it's own draws about 62 milliamperes at 15 volts, just idle.

I have seen current draw up to about 1/2 amp on average, so if you have the original 400 ma supply, get an updated one, you are likely to have erratic operation on the large scale QSI decoders. QSI started shipping an 800 ma one after I figured out the "mystery" of how much current was necessary.

Funny story: I was having programming issues, and a QSI engineer kept claiming that 400 ma was fine. I was watching the current spikes during programming, and they were way over 400ma. A bit more questioning turns out this engineer had been using his OWN supply for years, not the 400 ma supply. After more questioning, he was using a 1 amp supply, so sure, he was not having problems! The 800 ma supply starting shipping as standard right away ha ha!

You need to install the software driver first, which makes the programmer available via a "COM" port. The following sections address the selection and installation of the driver. DO THAT NEXT, and then come back here. Now if everything is good so far, we can check the "final stage" of the programmer, the connection to the decoder. This can be a real pain in the ass. The driver needed seems to vary also with the version of the CV Manager software

Do not plug in the dongle! You need to install the software first!

The driver will not install on windows 8 or 10 with the normal install. Part of this is because it is unsigned, and Windows 8 and 10 won't allow this by default. The other part of the difficulty is that it needs to be installed in a troubleshooting / compatibility mode for windows 8/8,1

First, have the silabs driver already downloaded and in it's own subdirectory (unzip the file). The file I use is from the QSISolutions site named: qprog_usbdriver_winxp_3_2.zip

Please note: some newer versions of the programs may need a different driver, I found this on the newer CVManager. Since I use the Titan ET features, I use the older driver.

Put computer in the mode to allow unsigned drivers (windows 10):

One way is to do this is:

Your computer will reboot, and then after some time you will be prompted with a menu with following options.

Then the following menu appears:

Then the following menu appears

Now the computer will restart and the boot menu appears.

Choose: “Disable Driver signature Enforcement” from the menu. Now windows will start and you can do the installation of the driver that is not signed.

(why in the heck are you still running windows 8?)

You can install the driver on XP, Vista and Windows 7. Nothing special, except there is/was a different driver for Vista 64 bit.

Now to install the driver (windows 10):

I still do the troubleshooting way, but some people can directly install from here.

Clearly, navigate to the folder where you unzipped the driver.

Then right click on the installer executable: QP_USBXp_Installer.exe and select "troubleshoot compatibility"

I pick the "troubleshoot program", then tick the boxes for "earlier versions of windows" and "requires additional permissions"

On the operating system selection, I pick Windows 7

Once the software installs, THEN plug in the programmer

If you get stopped from running the program, you can change the  HKEY_LOCAL_MACHINE\SOFTWARE\Microsoft\Windows\CurrentVersion\Policies\System\EnableLUA to 0 in regedit. you will probably have to reboot.

There's rarely an issue with these installs, just accept the defaults. If you have trouble installing it, try troubleshoot compatibility as in the driver install, and drop back to Windows 7.

Be sure you use an install xxx.exe file the first time, as it installs the dll needed by the program. There are updated program files that are distributed as .exe, but they do not do the full install, so you do the install, and then you can copy the newer program version (the .exe file) to the same directory it was installed in. If you get stuck, email me.

(Original name was Q2Upgrade, then later renamed to Quantum Upgrade)

This is the program used to load the firmware and sound file to the decoder. It is all one file.

I have not found any issues using the latest released software on the LS Titans.

Distributed as both full install package, and program executable only. You need to do the full install first, you can overwrite the exe with a later version.

Remember you must load the proper "blank" file to start with, otherwise some options will be grayed out. (FILE...OPEN/NEW)

Pick the proper model number of hardware, if confused, pick the LS and the closest file you can find, "respecting" a Q2FX vs. a Q3 file.

If you still cannot access the CV's you "need" then go to the "Options" menu and then "Enable All CV's". Danger, you may enable cv's that your hardware does not have so be careful, i.e. don't mess with chuff settings on a diesel!

Very important, after version 3.0.x.x, the "Engineering Menu" was removed. There's all kinds of cool features there, I have not explored them all, but I would stay at these versions, and not go to 3.1.x.x unless you are using the Q2FX files. I'm using 3.0.

First, when in doubt check your electrical connections.

Make SURE there is nothing else on the programming track, lights in tenders always on, etc. This is the number one problem people have.

Try using Quantum Upgrade and "get locomotive information", or the upgrade menu, and "test compatibility"

When programming, the original QSI Revolution and the new QSI Titan must have a motor connected at a MINIMUM, and I strongly recommend a speaker.

If you cannot get past 40% in the beginning of programmin, it means no communication or response at all, 40% is the first programming command.

A tip is to read the baseline current of the programmer hardware on the setup:

During the confidence test or programming, given 15 volts dc input, the Quantum 2 boards program at about 100-110 milliamperes (average), I did not measure peaks.

if you cannot erase the flash, typically it means you have some extra load on the programming inputs/track

Finally, if all else fails, remove the board from the loco completely, and only connect to the Track + and Track - inputs.NOTHING ELSE.

During the confidence test or programming, given 15 volts dc input, the Titan boards program at about 100-120 milliamperes (average), I did not measure peaks.

If you cannot erase the flash, typically it means either some extra load on the programming inputs/track OR that you do not have the motor load connected. (The Titan is different from the previous QSI unit in that the minimum configuration for programming is the programming (track) inputs AND a motor. I've used an 11 ohm resistor with success, although most motors may present a 4 ohm or less load. (my reasoning is that it just needs the circuit complete, not the full load of a motor, and the lighter load may cause less variation in the power supply, since the standard power supply is low current and unregulated.)

One common failure is right at the end of the programming cycle. It can fail even if you have run the confidence test. The confidence test apparently only reads the flash, does not test read and write.

Don't forget to press F6 twice  if no sound, this is the "startup" command, many sound files have this.

All Q3 diesel files contain dual prime movers, but are set for single prime mover by default. In order to activate the second prime mover simply increase CV52.11 (Motor2 Volume) to your preferred level. I recommend setting the stereo controls so that CV116.10 (Motor 1 Balance) = 127 and CV116.11 (Motor 2 Balance) = 255 for optimal stereo separation between the two motors.

Below is a simple setup with a motor and speaker and the socket. I'm holding a connector that lets me use the speaker plug on the Revolution (by the "I" in QSI on the programmer dongle) or change to a couple of wires that let me screw in to the Titan terminals. Al this is on a small board, the speaker is in the top of a spray paint can.

A more sophisticated setup below. This one has a socket and also DIP headers to screw into Titans that have had their pins cut off. Notice that I have both speakers there to confirm programming between them. At the front you can see the jack for power and the usb socket.

Inside, I just removed the programmer from it's housing to make an easier installation into the box, but you could leave it in the housing and just cut a bigger hole in the cigar box.