(Note in 2017, the manufacturer is no longer associated with Aristo-Craft or Crest Electronics or Lewis Polk, so title has been changed for people new to the hobby)

With Aristo-Craft & Crest no longer in business, the entity that sourced their Train Engineer products very much exists and has since evolved the "Revolution".
Precision RC is the company that offers the Revolution products, and the Base Station now includes a plastic housing and extra cost optional cooling fan.

The Precision RC "PWC" Base station version of the Revolution is rated at 15 amps continuous output current, whereas, their "Linear" Base station version is rated at 10 amps - perhaps owing to the confined space within the shared housing in which physically small filtering components are added on the main circuit board - necessitating the derated output current. (Unfortunately, Precision RC does not appear to offer the externally connectable PWC to Linear filtering board with the larger components that Aristo / Crest once had which could be used with a PWC Base station having the higher output current capability.)

Both PWC & Linear Precision RC Base Stations have a choice of "Built in Diesel or Steam Sound". Of course with a track power setup that the base station is intened, the sound is not going to be from the loco, but from whatever speaker system is connected to the base station.

The following describes the early version Aristo / Crest Revolution product that was not equipped with a plastic housing characteristic of the newer Precision RC company offerings. That said, the early and evolved version have close similarities.

In year 2013 I obtained an Aristo-Craft Revolution 2.4 GHz Base Station Set Train Engineer primarily for its increased output current capability of 15 amps DC compared to the 27 MHz Train Engineer that outputs 10 amps maximum that I had been using. This is beneficial for track power applications when using multiple locos pulling long heavy trains on grades. 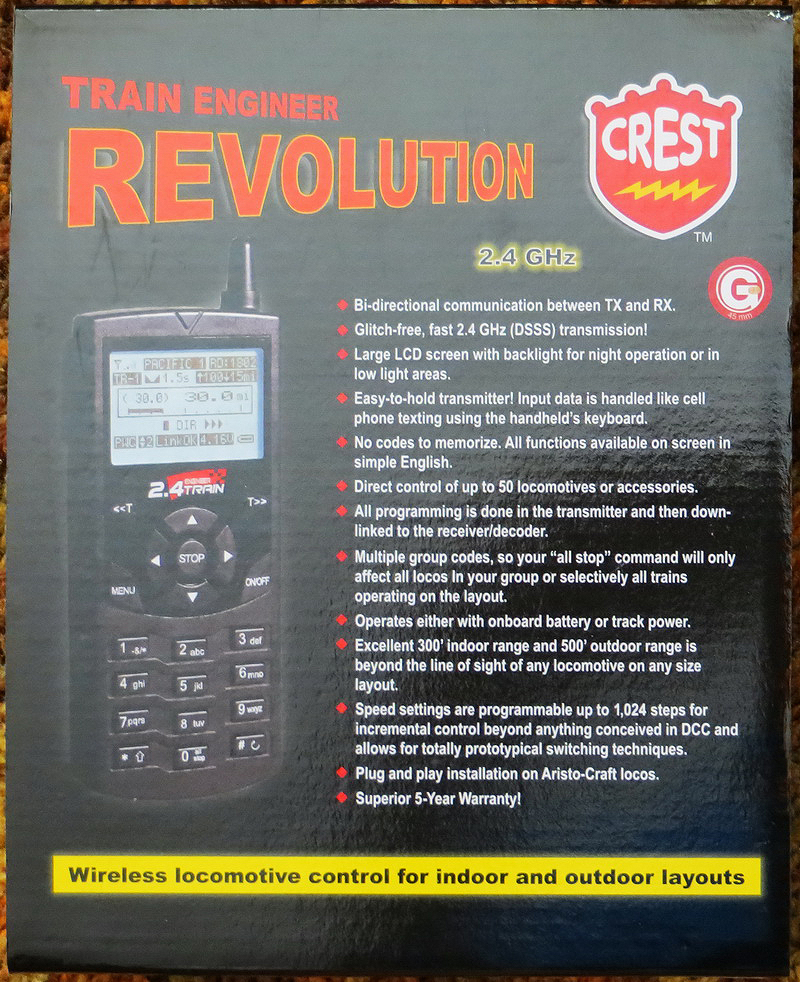 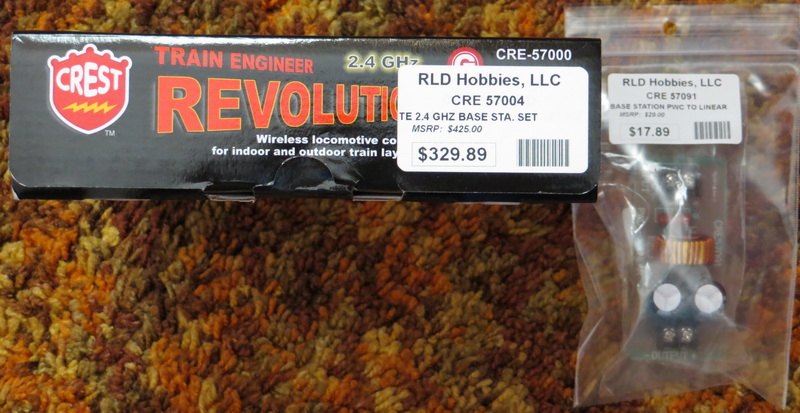 At the beginning, the Revolution design intent is for a receiver to be installed in each of many possible locos that can be operated at the same time on a layout but individually commanded from only one transmitter. As such it has many features that are not needed for track power application. The more recent product offering of the Revolution is the "Base Station" variation that is suited for track power applications, though it could be mounted in a loco or trailing car, too. This version has a physically larger receiver board (to support a much greater 15 amp capability) when compared to the Revolution receiver board strictly intended for a loco installation. That said, the larger version is still relatively compact. 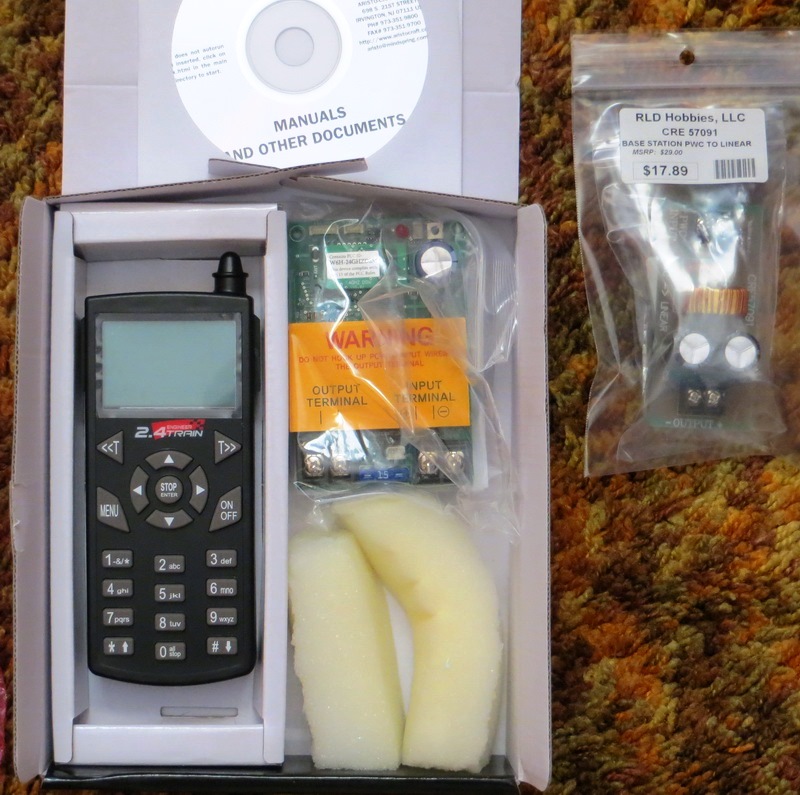 The Base Station set includes the transmitter (same unit supplied with other Revolution offerings) the larger receiver board, and cables with mating connectors for Remote Link, Auxiliary connector functions, and Headlights - which would not be used in a track side setup. An optional PWC to Linear Board is an extra cost item. 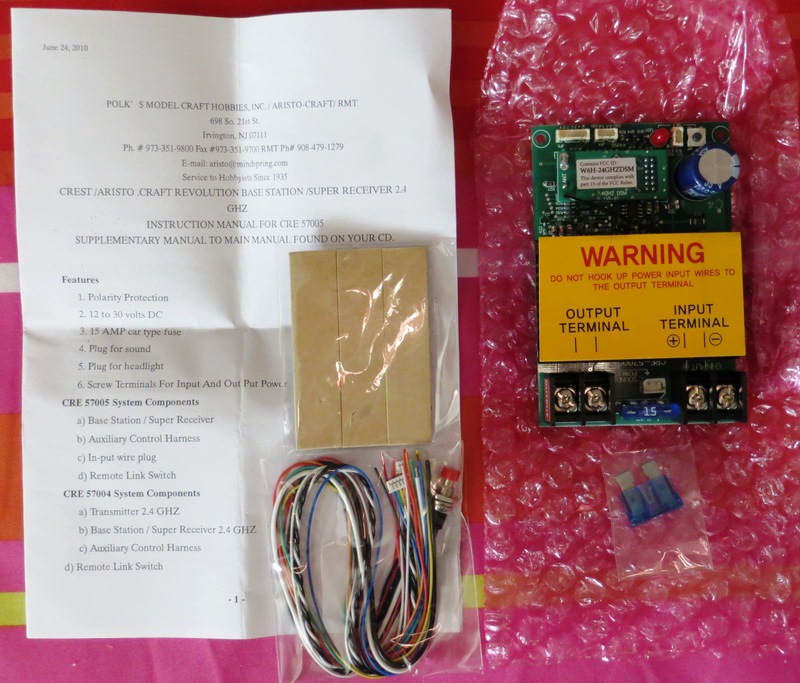 What this Revolution Base Station (CRE-57004 version) receiver board does not include is physical hardware to filter the pulse width control (PWC) output to Linear (plain DC). Hence, the output of the receiver board is always PWC. Whilst arguments can be made as to the benefits of PWC vs. Linear, some products do not perform with PWC - such as the USA Trains brand caboose with rear flashing light. (The light neither illuminates nor flashes if using PWC.)

Consequently, for those users that desire or require Linear DC output, Aristo-Craft has chosen to fill the need with a discrete PWC to Liner circuit board that can be purchased as an option. Like the base station receiver board, the PWC to Liner board version for this application is, also, a physically larger board to handle up to 15 amps. The board is to be connected to the Revolution receiver board output and low pass filters the PWC waveform into plain DC. However, the PWC to Linear board has no control to switch from PWC to Liner and back to PWC. It's just hardwired for Linear output. The older 27 MHz Train Engineer receiver assembly included a slide switch that the user could set to PWC or Linear mode.

Note: At one time Aristo-Craft appeared to be advertising yet a then newer version of the Revolution Base Station (CRE-57005 version) available at some unknown future time that includes actual remote control selection for PWC or Linear. The receiver of this unit, therefore, would be expected to include the PWC to Linear hardware built-in, but at the physical expense of singular larger circuit board.

In this regard, see the July-August 2013 Insider where it states, "We will have an upgraded super receiver with 15 Amps and 24V, now with either linear or pulse width power..."  The Crest Web site now defunct for the CRE-57005 Base Station / Super Receiver had indicated an SS or SD suffix for Steam or Diesel sound.

Until such an offering actually appeared (never did), remote control of PWC and Linear can still be pieced together using the Base Station CRE-57004, PWC to Linear board CRE-57091, a DPDT Relay (Tyco K10P-11D15-24) and other discrete components to be described as follows:

The Revolution hand held transmitter is shown below.

Though the Aristo Revolution transmitter includes a command means to set PWC or Linear, as previously stated, the receiver hardware does not support it - having no apparent dedicated connector pin that a user could make use of to control a relay when employing the optional PWC to Linear board. Since the Transmitter includes such a command, it seems Aristo must have envisioned using it in a receiver, but appears to have avoided it maybe because of increased physical size of the receiver for in-loco applications. Instead, Aristo had offered optional PWC to Linear circuit boards - one smaller size for in loco use and another larger one for Base Station use (CRE-57091). Of course, these must be hardwired to the receiver board by the user.

Shown below are the Revolution Base Station receiver board and optional PWC to Linear board.

The non component sides are shown below.

A Solution that includes Transmitter Remote Control of PWC / Linear

For remote control, there is a solution by using one of 6 pins on the receiver board's Auxiliary connector to remotely control a 15 amp relay, that when wired between the receiver board and PWC to Linear board, can switch it by activating the corresponding transmitter numeric button. The numeric button is programmed to function in a latching fashion so the relay will stay in its commanded state until the button is again actuated, thus toggling the relay on / off / on, etc. To implement this, a relay driver circuit is required to provide sufficient current to reliably drive a relay coil since the receiver board Auxiliary output open collector transistor is too marginal in sink current capability being about a 10 ma target value to yield desired collector to emitter saturation voltage.

Shown below is a block diagram for an example solution. 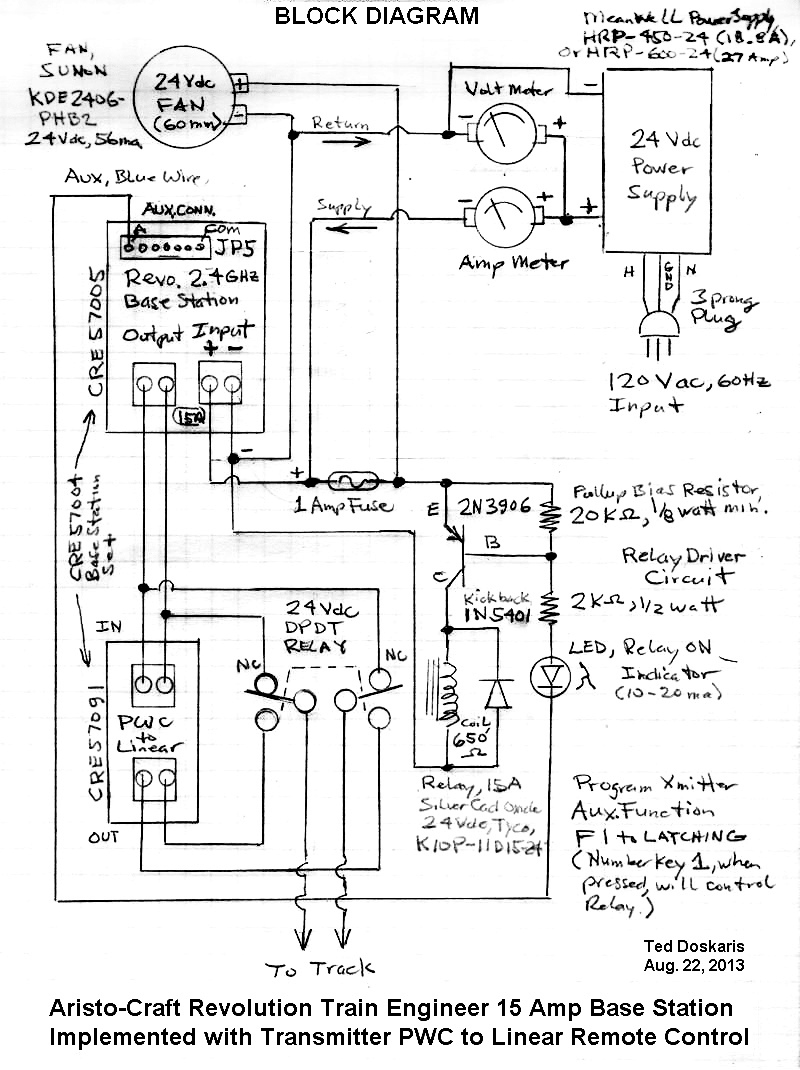 The Base Station receiver board assembly, when operated at rated current, supposedly does not require a fan like that of the older 27 MHz unit; however, if placing the unit in a confined area, using a fan for cooling adds greater operation assurance which I chose to do. 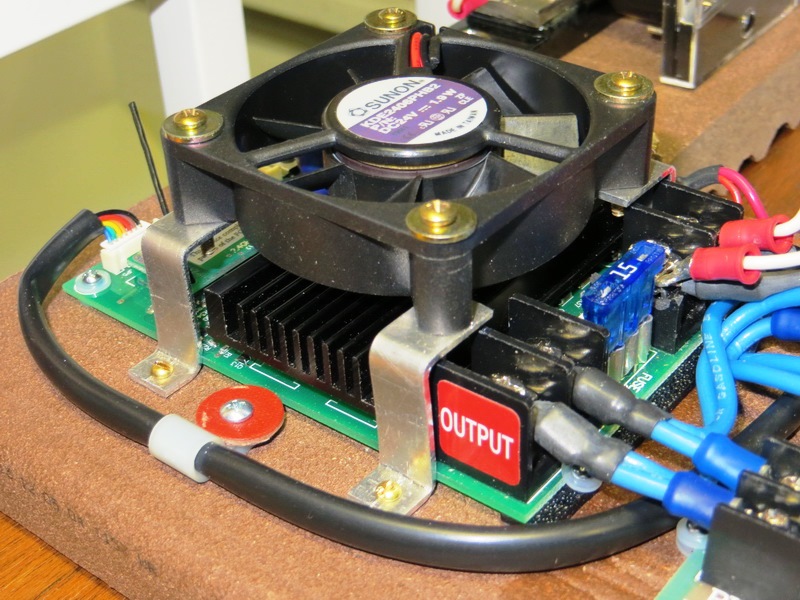 A close up view of the amp meter is shown below. 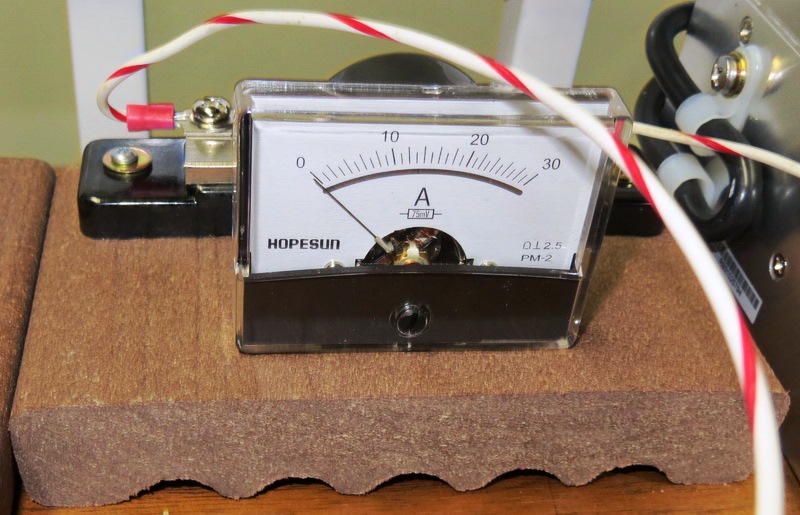 It's a 30 amp DC meter with large shunt mounted behind it. A 20 amp would be a better choice, but this one was available at the time.

To power everything, I chose to use a new MeanWell Power supply, 24 V dc rated at 27 amps, P/N HRP-600-24. MeanWell, also, offers an 18.8 amp supply, P/N HRP-450-24, at slightly less cost that would be the preferred choice, but I decided to opt for somewhat more current capability for future uses. 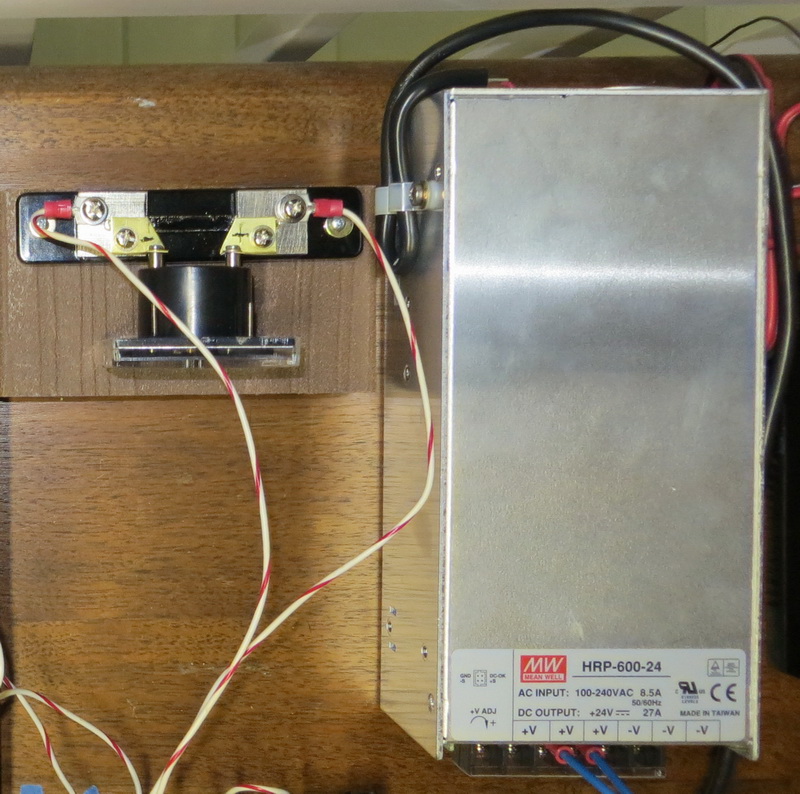 The 27 amp power supply does have the advantage of a dedicated rear terminal block to connect just the AC power cord, whereas, the 18.8 amp supply has everything connected on a common terminal block at the front. 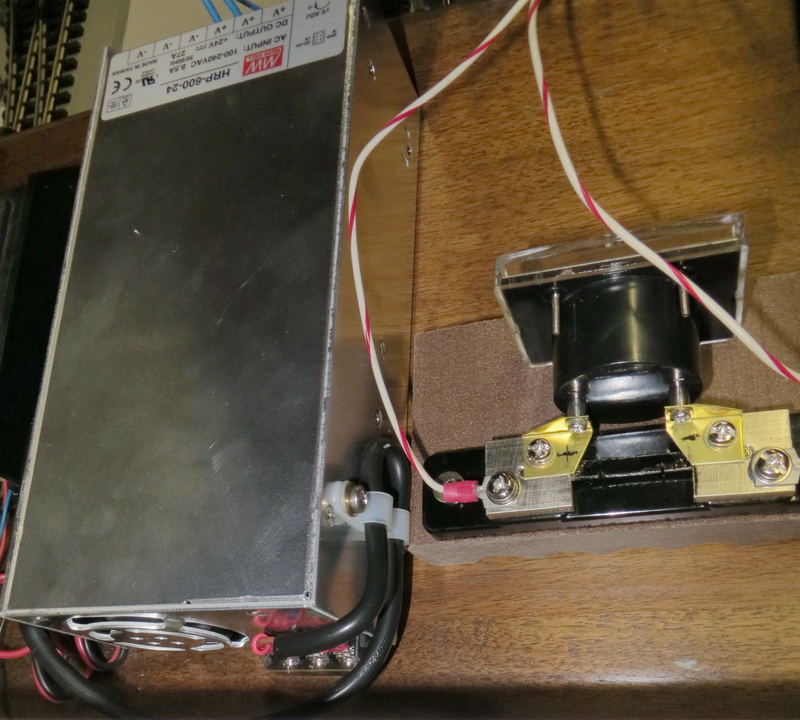 Also, note the shunt behind the Amp meter is attached to it using brass bent and drilled to accept screws rather than using wires.

Implementing all the Hardware

Shown below is the actual hardware implementation. 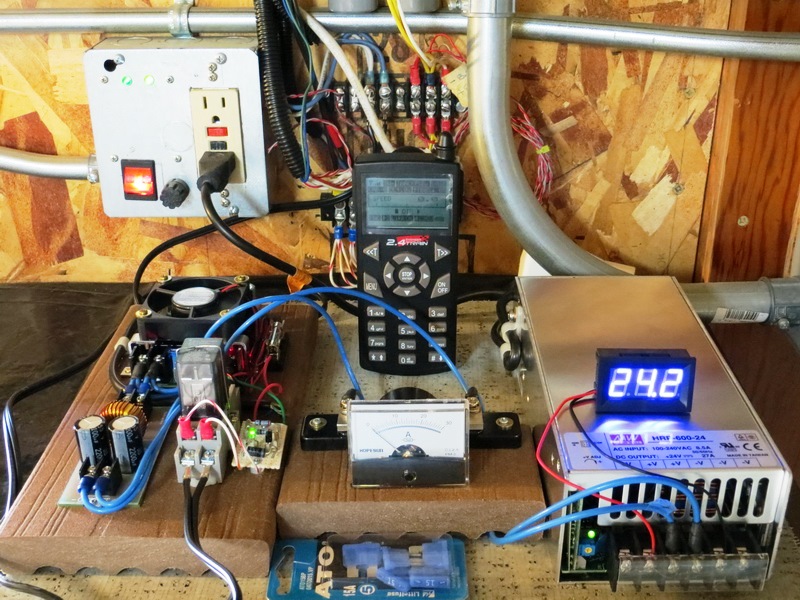 Note that Aristo only provides two holes at the top of the receiver board for mounting. Also, there are no mounting holes on the PWC to Linear Board.

I used # 2 screws for mounting all the boards.  Where the screws were placed, I spaced the boards with .047 inch thick washers (or a plastic strip).

Where there are no provisions for mounting holes, I straddled the edge of the board with washers placed under the screw head in order to fasten down the board. 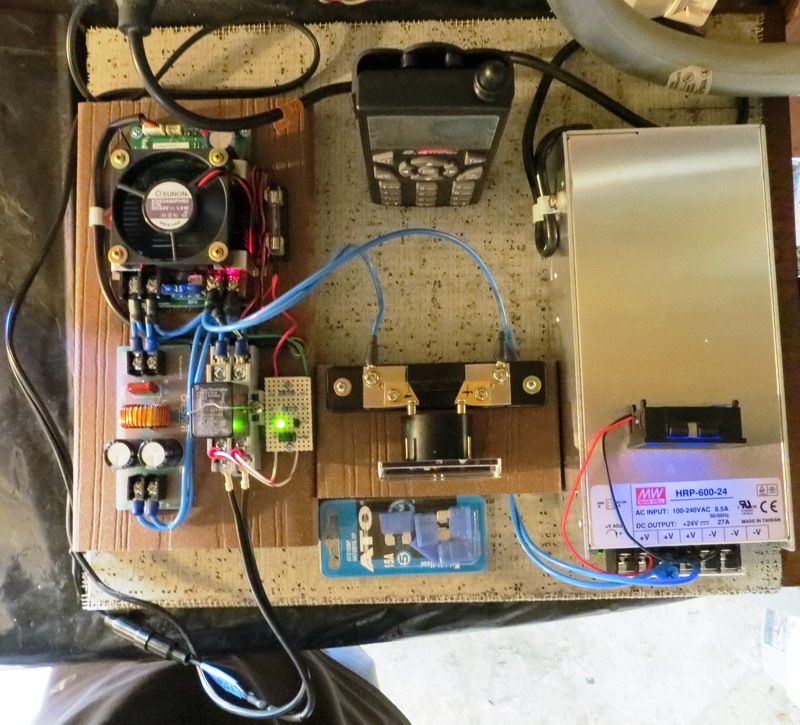 I used 14 AWG short length wires between the boards, amp meter and power supply that are to carry as much as 15 amps. This will work OK for such minimal distances. 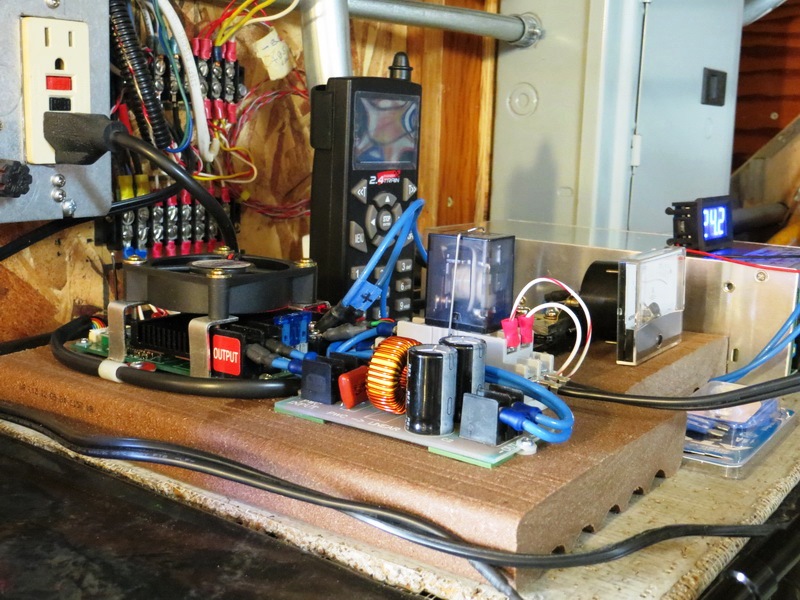 A couple of pictures follow of the relay that switches PWC or Linear output. Though the relay case is somewhat translucent plastic, its contactors' positioning can still be seen.

Shown below, the relay contactors can be seen in PWC mode when the LED indicator is NOT illuminated. 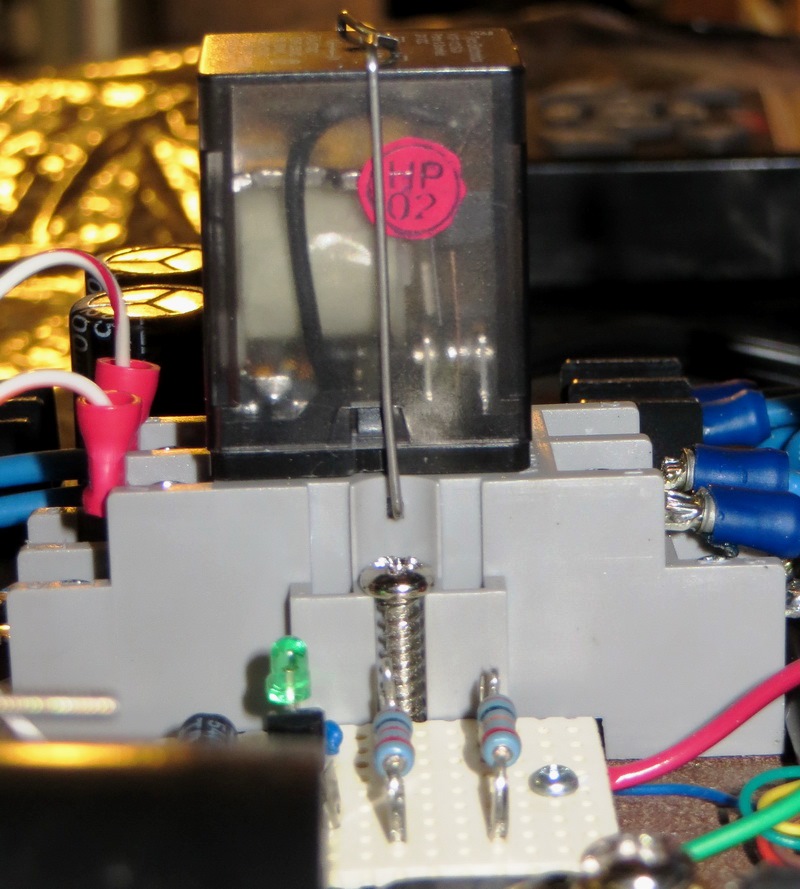 Shown below the relay is energized with its contactors in Linear mode when the LED indicator is illuminated green. 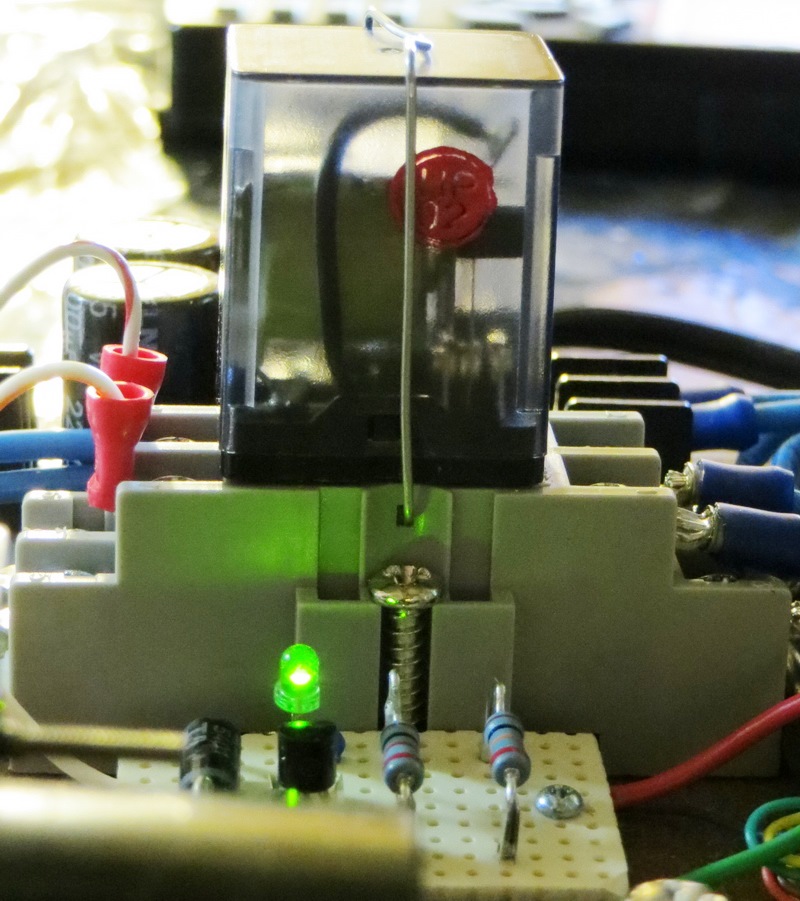 I made a couple of videos of the Base Station and PWC to Linear apparatus.

The video below describes and shows PWC and Linear waveforms on an oscilloscope before I integrated and mounted all the components on a piece of deck board. Title: Aristo Revolution Base Station With Optional PWC to Linear Board Test

The video below is about the implementation. Title: Implementation of an Aristo Revolution Base Station with Switchable PWC to Linear Output

Dave Bodnar has some excellent articles on his Web site about the Revolution. Below are three specific articles that pertain to the Base Station when trying to implement it with PWC to Linear:

The 15 amp Track Side Revolution Base Station

The Auxiliary Interface Note that this article is respect to the smaller receiver board - though it's Aux connector outputs are similar to the Base Station.