Note: this is the outside frame, narrow gauge locomotive, not the C-19 Consolidation

This loco was a common loco, sold in many configurations usually narrow gauge, by Baldwin.

While doing some conversion work on one of the new Bachmann 1:20 scale
2-8-0's, I found the motor to be loose on the gearbox.
This is a new design gearbox mount from Bachmann, and bugs may have
inadvertently crept in to the assembly process.
The following is the procedure I used to adjust this and subsequent units.
First is the boiler removal, which is about the easiest Bachmann Large-Scale to disassemble to date.

1) Roll engine over on fireman's side, locate forward end of reverse actuating rod under running board where it attaches to the valve gear.
Remove slot-head screw. NOT MAGNETIC! Don't lose it!
2) Roll engine onto its wheels. Remove all 4 screws and both smokebox supports (if you try to flex them out of the way, it will scratch the paint).
3) Roll engine over on it's back.
4) Remove ashpan (4 small screws).
5) Remove 4 screws about in the corners of inside of firebox under ashpan.
6) Remove one screw between cylinders under front truck.
7) Separate boiler from chassis. Pull motor wires down from boiler to reveal in-line plug. You may unplug for complete separation of boiler from chassis.

Check motor for tightness to gearbox as outlined below:

Pull the lower gear cover, 4 screws, and front support bracket on top of frame to gearbox, 2 screws, lift the motor/gearbox off, removed 4 screws on one side and 2 on the other of the gearbox, separate the gearbox halves. The motor screws are located inside the gearbox. I removed the screws, locktited (222) and lubed before re-assembly.

When re-assembling, make sure the sander pipes from the sandbox on top of boiler fit into holes provided in frame just forward of valve gear support bracket. They may spring backwards and rub on lead driver.

The #1 problem is the axle gear splitting and then spinning on the axle. In 2012 Bachmann has made a new axle available with a brass gear, part number G813X-AXELBG

Whether it will last longer and it's effects on the other nylon gears is of yet undetermined. The rest of the gearbox seems to have the same poor quality white plastic gears. One thing for sure, it won't split and spin on the axle any more.

Many people have bought the replacement gear from NWSL. Stan Ames offers the following information: I used the NWSL gear on two of mine and found 6 months later I had some problems.  Turns out that the NWSL gear is thinner at its base then the stock  Bachmann gear.  This lets the brass bearings on the axke to move inside the gear box.  I placed a#10 brass  washer with its center drilled out so it will fit on the axle  on one side of the NWSL gear which provides sufficient thickness so that the Bachmann brass bearings say in their correct place.

Tips from TOC (The Old Curmedgeon)

There is a common problem that the motor/gearbox is loose on the mount arm.

Check motor for tightness to gearbox as outlined below:

Pull the lower gear cover, 4 screws, and front support bracket on top of frame to gearbox, 2 screws, lift the motor/gearbox off, removed 4 screws on one side and 2 on the other of the gearbox, separate the gearbox halves. The motor screws are located inside the gearbox. I removed the screws, locktited (222) and lubed before re-assembly.

Make sure you have the 2 brass collars that are on the drive axle INSIDE the gearbox before tightening the screws on the cover!

When re-assembling, make sure the sander pipes from the sandbox on top of boiler fit into holes provided in frame just forward of valve gear support bracket. They may spring backwards and rub on lead driver.

Binding on curves: TOC says: "I have found that on close couple the metal deck plate catches the coal spill pile and derails the lead driver. Same on far couple and 1500's.

Fix is to lift out the coal retaining board (pulls straight up), then pull the coal spill pile straight up. Now, turn the pile so it is still oriented the same, but one end all the way up to the top of the recess behind these two removed parts and one end all the way down. Fit the spill pile into this recess, then work it down flat against the bottom. Install coal retaining board. Problem solved."

I had some trouble with the brake rigging rubbing on the flanges and shorting - causing a weird stutter. Make sure that they aren't rubbing when you re-assemble it.

Remove the circuit board from the boiler, there are 2 Philips screws that look like they hold the smoke unit, but the entire board comes with it. The first set of 2 wires go to the motor. They are black and red, and you can trace them from the motor.The wires from the motor are both black. They go to a small 2 pin socket. This connects to a 2 ping plug with red and black wires.

The second set of wires are orange and pink, and they solder to the main board near screw terminal 1.

The last set of wires go to the screw terminals, they are black going to 8, and red to 7.

Leave the headlight wires in 7 & 8, and remove the motor wires only.

DON'T solder the wires yet, twist them together and put a bit of tape on it. The track pickups come from the "ashpan flicker board" and are black and red, at the very end of the main board, and are labeled "power". There are 2 empty solder holes "inboard" from the black and red, and then there are 2 wires in the "next" set of holes, and they are purple and white. The black goes to white, and the red goes to the purple. So now you can connect your decoder. Notice that the colors of the wires are "reversed" from the NMRA DCC standard.

Put the direction switch into the "large scale position".

Put the chassis on rollers, and call up loco 3 and check the direction of motion. If it is backwards swap the motor + and - wires, test again.

Solder the wires up.

The headlight wires are still connected to the screw terminals. We need to remove them from pins 7 (yellow) and pin 8 (black).

Test this before soldering. If the light does not light, reverse the connections.

These 2 wires go up to the boiler, and one wire is gray and goes to screw terminal 2. In this loco, the black wire had been pulled out, but I suspect it was on screw terminal 8.

Note on wiring: If you look at the 4 pin connector that goes to the tender, 2 of it's wires go to the CON08 pads on pcb02. These are the track pickups from the tender.The connector from the chassis goes to CON7. Then there are wires at CON06 which go up to the boiler.

The other 2 wires go to the CON2. You can see the traces for these 2 connections go "away" from the leds to 2 more pads labelled CON1.

(In the tender there are 4 binding posts. The track pickups use 2 of them and use black and brown wires to the connector, the led wires go to a second pair of binding posts with red and black wires.

There is a small board underneath and it has 2 leds, a red and a yellow

The wires to the red led are blue and brown

The wires to the yellow led are white and red, the white wire is common (plus)

They go up to the main board in the boiler, no dropping leds.

There are 2 LEDs in the firebox, a red and a yellow

The wires to the red led are orange and gray

The wires to the yellow led are yellow and green

So let's start with the yellow led, the red and white wires. On wire will have to go to the DCC decoder "common" and the other to a function output wire. We will use

From the picture above, the yellow led uses the red and white wires, and the red one uses the blue and brown.

We want to connect the red and yellow firebox leds on PCB02. This is wires red and white, white is positive and red is negative.

Now set output 6 to the lighting type required, so set CV125 to 135 (set for led, flicker effect, on in both directions)

red wire from led goes to decoder white and yellow

for the red led, the blue is negative and the brown is positive 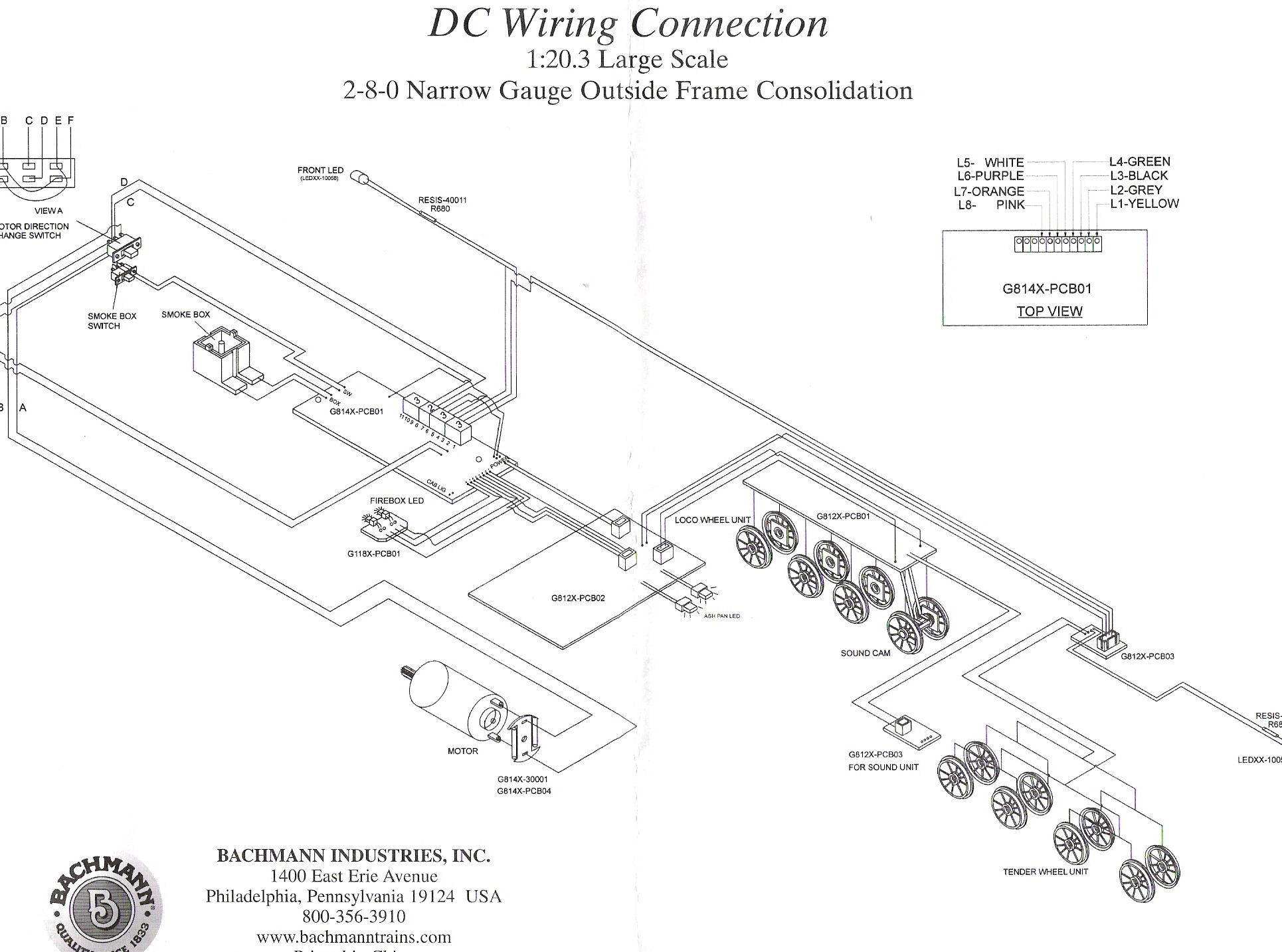 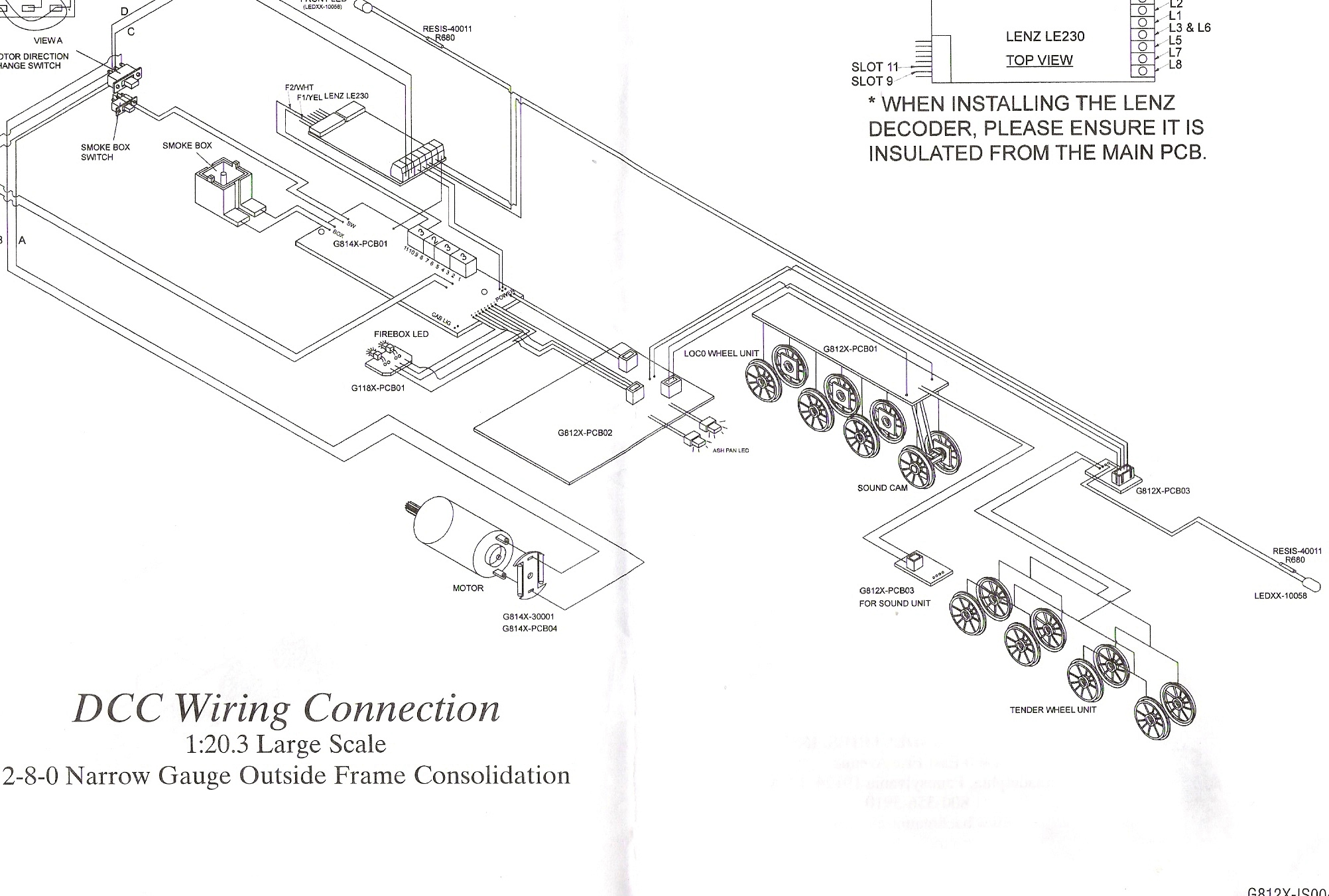