I bought 2 of these, one in the black and white "Zebra" stripe, and one in the blue and yellow Santa Fe freight colors. Santa Fe had both paint schemes.

I like the looks, and it's currently the best selling USAT loco (It was the F7).

Why is it referred to by USAT as a 7/9? Well, I assume because they were very similar.

Here's a bunch of info I gathered on the web:

According to original "Diesel Spotters Guide" on pg. EMD-25, "The GP-7 has three or four louvers below the cab and two vertical rows of louvers under the radiator shutters at the far end of the long hood. The GP-9 has one or no louver beneath the cab, and lacks the two vertical rows under the radiator shutters. Presence or absence of the dynamic brake blister tells nothing, as both GP-7's and GP-9's came with or without dynamic brakes.".

GP9's had two or three pairs of louver sets on the engine room doors (the tall doors), which the GP7's did not have. Most GP9's were built with one set of louvers on the "battery boxes" (cab sub-base), but the later ones had two sets of small louvers there. These GP9's also had single 48" cooling fans replacing the paired 36" fans.

In the days before major rebuilding programs, and "phases" were determined to be chic, the GP7 had TWO vertical slit louvers under the cab, and ONE forward of the cab on the battery box access doors, on each side. As pointed out previously, the "presence or lack" of the dynamic brake blister meant diddly squat.

Below is a copy of the pictures on the USAT GP7/9 Manual. The only difference is the radiator louvers at the top of the far end of the long hood.

From the data above, it looks like both drawings qualify for GP7 based on the louvers under the cab (battery boxes), the 2 sets of louvers at the end of the long hood, the group of 3 louvers near the cab, and the long side sill in the center. 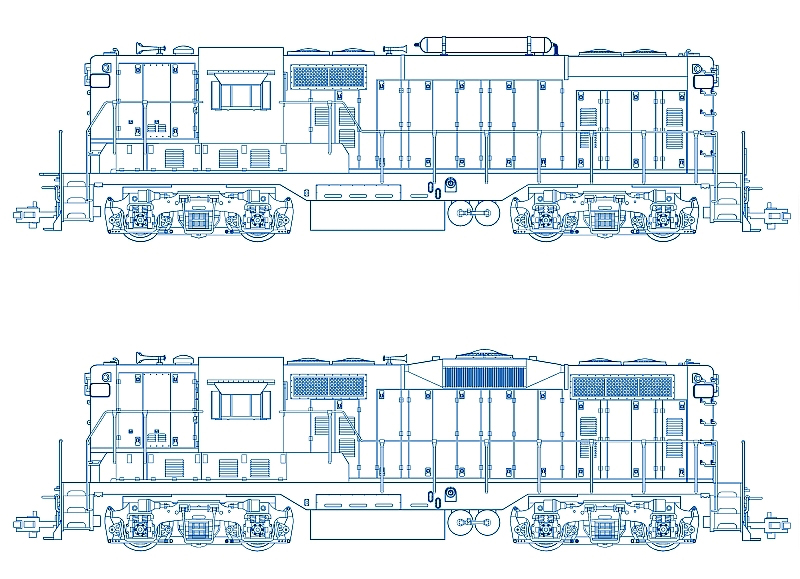 Here is the best GP7 vs. GP9 explanation I have ever found:

here's another source of information: http://trainiax.net/mephase-emdgp7-9.php

Additional items on differences: The gas cap location may be different, need to research

The handrail stanchions on a GP7 should be cast, and the GP9 had pressed steelstanchions.

Note the standard body screws and the different screws for the weights. The screws for the fuel tank are a 3rd size, 7.85 mm ling by 2.5 mm over the threads. Avoid putting the other screws in these holes, as they will be permanently enlarged.

First, be careful, there are a number of little "pins" sticking up from the top of the shell that can be broken off easily. (Wonder what they are?) I use a thick terry towel to prevent damaging them. Watch the horns.

Tip: if you lay the loco on it's side, and have a magnetized screwdriver, light pressure as you unscrew, will normally allow withdrawing the loose screw with the screwdriver.

First you will probably do best to remove the fuel tank because there is one other screw near it that must be removed. There are 2 small screws at each end of the fuel tank. This is the normal home for the speaker. This goes back on only one way, there is a small difference between the diameter of the 2 locating pins at each end, so if it does not go back on easily, reverse it's direction, don't force it!

There are 4 deeply set screws on each side of the fuel tank, pull these out. (swivel the trucks out of the way). Keep track if you get them all the way out, or some are still in the chassis.

There are 4 more deeply set screws under each truck, basically where the first and last axles are. On one truck, you can normally swivel the truck out of the way. On the other truck, 2 of the screws are almost impossible to see, they are under the "A" frame, and what you can do is carefully spread the sideframes, and pop the motor block out, and by twisting the "A" frame you can finally see these screws. Often they are missing!

Now you need to remove 4 screws that are not recessed, and they are right at the sides and ends of the battery boxes on each side of the cab. Theoretically you could pop the shell off without removing them, but it's kind of a pain, and these 4 are easy to get to. Note they are not evenly spaced side to side.

Now you can lift the shell off carefully, but there's a lot of wires connecting things, so be careful!

Now you should unplug wires to keep from ripping them out. Stop and look first!.

As soon as you get the shell away, check the chassis for the screws that you did not get completely out. Push a really small screwdriver into the little hole to drop the screws out. DO NOT put anything big in there, if you enlarge the hole, the screws will have no internal shoulder to clamp the chassis to the shell... i.e. you just made that screw hole worthless.

Each smoke unit has 2 sets of 2 wires. There is one pair of wires for the motor, and one pair for the heating element. 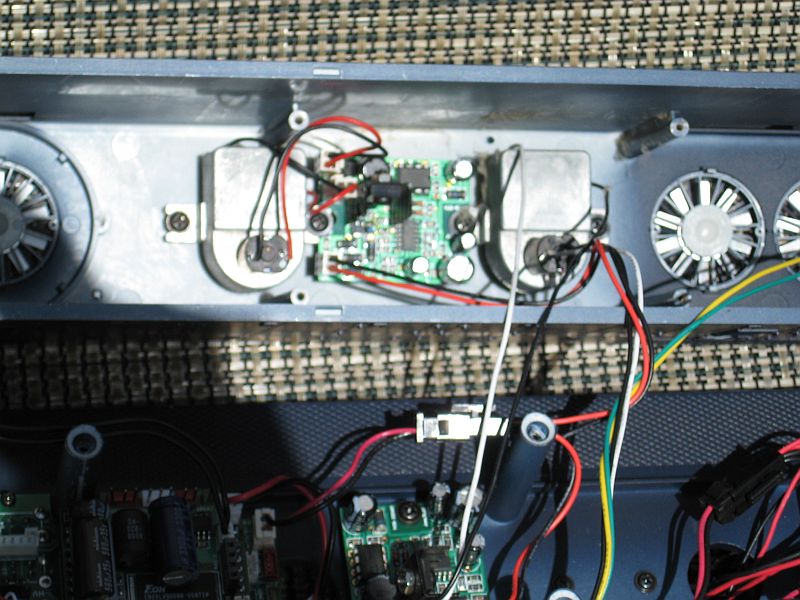 The "outboard" smoke unit has it's regulator board on the chassis. It also uses white and black wires: 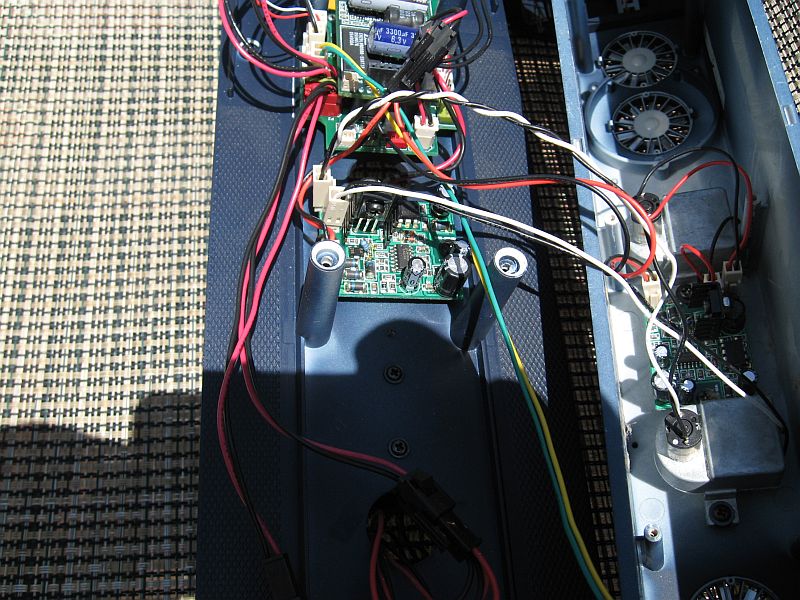 These regulator boards have the 2 plugs labelled "motor" and "resistor" to keep from confusing the two.

"lamp" on the main board is for the cab lights

Kadee makes a kit specifically for the GP7, and it's simple to install. Here's the PDF of the install: Kadee 785

But this installation sucks. See the sub page on the Campac custom install kit: