The prototype turnouts shown below were photographed in the "Redwood Junction" area located in Redwood City, California that is located roughly midpoint between San Francisco and San Jose.

Redwood Junction is where Southern Pacific freight trains along time ago had diverged to take a short cut across the San Francisco bay in the Menlo Park / Palo Alto area to the Dumbarton area in the east bay. The former SP Dumbarton rotating bridge has not been in service since the mid '80s, and the peers near the land to water areas had been vandalized (burned).

Union Pacific having since subsumed SP currently uses what is left of that line along with a portion that also goes to the port of Redwood City for freight service and does the maintenance on it.

Caltrain is the commuter train that primarily operates between San Francisco and San Jose. Caltrain had acquired this former SP line a long time ago and then later acquired the Redwood Junction - Dumbarton line via a bond issue. This line is suppose to be re-activated for commuter train service - originally hoped for by year 2010.


An example of a prototype turnout main rail points - close up view. 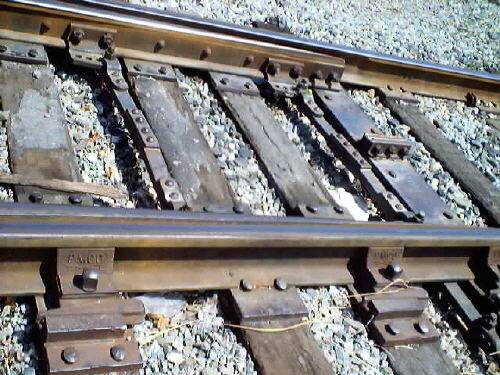 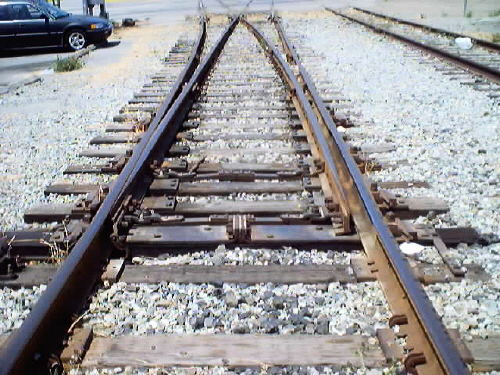 
An example of a prototype turnout guard rail - close up view.

The space between the guard rail and main rail at the closest proximity measured 1  3/4 inch for the straight path and 2 inches for the diverging path. 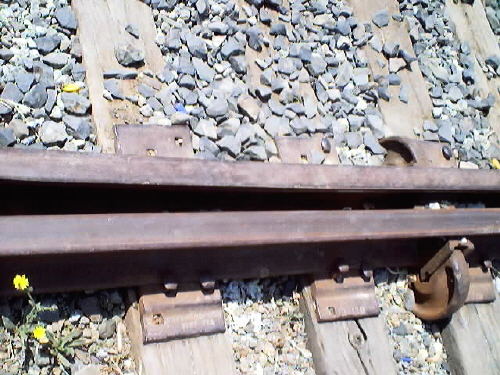 It is to be appreciated when relating the prototype measurements in the above example turnouts to #1  "G" scale track, that the #1 scale track represents 1/32 scale primarily due to its 45 mm (~ 1  3/4 inch) spacing between the rails, and many model companies (including Aristo-Craft) scale their rolling stock in 1/29 scale with wheel set spacing compromised to operate on this track.
Aside from this distinction, do not expect model track to necessarily conform to a scaled down prototype measurement - including the NMRA specified values - due to operational compromised made for model railroad equipment.


Shown below are a few pictures of real world, 1/1 scale, prototype turnout examples having to do with the frogs. 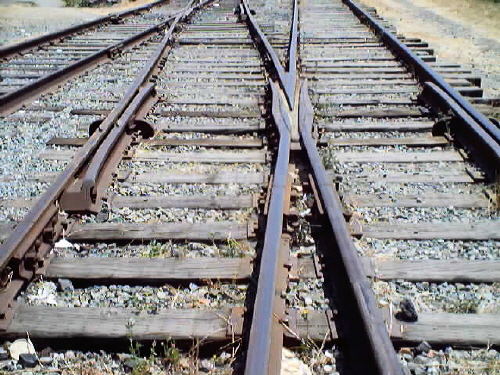 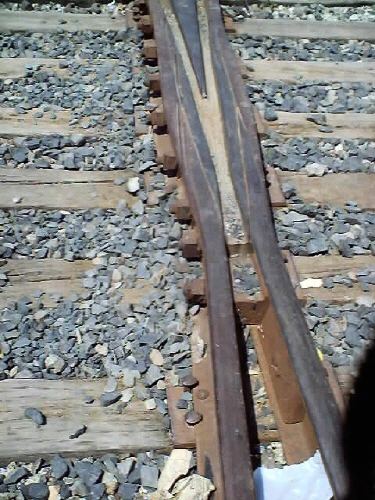 Prototype turnout with what seems like a motored type FROG or FROG point:
(I was told by the Union Pacific worker that the purpose of the movable frog point was to save on maintenance with respect to not having to periodically weld-up the point end - and sometimes replacing the frog - rather than to be concerned with car wheel damage.) 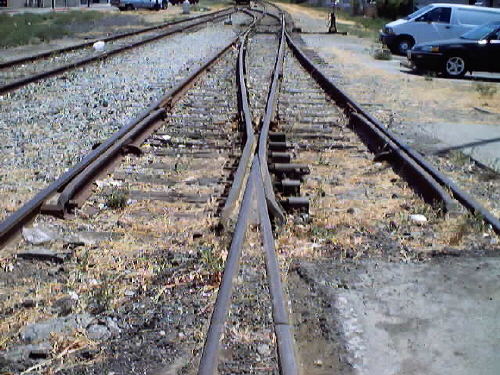 Prototype turnout with moveable type FROG point or FROG - close up view:
(The white object located at the point tip is a rock!) 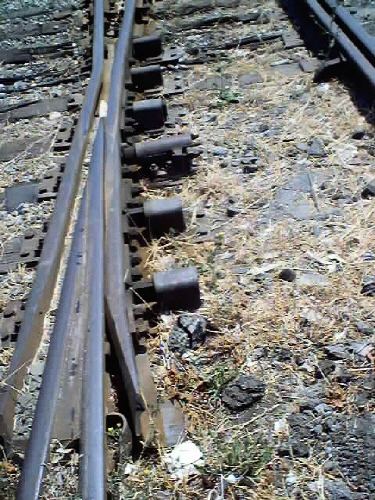 "A swingnose crossing (moveable point frog in US usage) is a device used at a railway turnout to eliminate the gap at the common crossing (a.k.a. frog)."
"Swingnose crossings allow the V-crossing to have as fine an angle as required, allowing for higher speeds.....
The swingnose crossing also overcomes the weakness of the gap by moving the point of the V-crossing from side to side depending on which way the turnout or switch diamond is set. The wheels are supported the whole way on their treads and do not make the noise and vibration that would otherwise occur."
See below link for Swingnose crossing:

Movable Turnout Frog point (or movable frog) info:
Below are selected patents with respect to a Frog point:

Shown below are examples of different mechanisms to keep wheel flanges from hitting the frog point: The pictures were taken along the commuter CAL Train line between San Francisco and San Bruno, California.

The picture below shows a robustly supported guard rail that is slightly raised above the stock rail.

It is to be appreciated that guard rail height should never be lower than its adjacent stock rail. Taking a que from the above picture, I have found that raising the guard rail about 0.015 inch higher than the adjacent stock rail implemented on an Aristo Wide Radius turnout kept derailments from happening with an otherwise OK turnout that had been fixed for proper guard rail to stock rail spacing.

The picture below shows a frog type with no guard rails required at the stock rails.

Notice the frog in the above picture includes upward guards to keep the inboard side of train wheel from migrating toward the stock rail, thereby, preventing the wheel flange from striking the frog point. I noticed these type frogs are typically along sidings or in some rail yard turnouts - suggesting lower train speed that may traverse turnouts having such frogs. Replicating this type frog for a model train turnout may be problematic given variations in wheel thickness from different manufactures.