QSI, a.k.a QS Industries is an OEM, who only sells to manufacturers, and makes the specialized ASIC (Application Specific Integrated Circuit) that is the "brains" of the decoder. http://www.qsindustries.com/ They do not support the large scale decoders. (Recently they have done a little retail sales).

QSIS, a.k.a. QSI Solutions is a company who developed a large scale decoder using the ASIC from QSI. They sell the LS and the HO decoders retail. The company was started by Tony Parisi of Tony's Trains, currently owned by Josh Shedaker.  http://shedaker.wixsite.com/shedaker You can download manuals, software tools and sound files there (but some files are missing).

Over time, QSI has made many different decoders, although I will focus just on the large scale ones. Each decoder has a unique hardware ID, which is important to note so that you don't try to load the wrong sound/firmware into a decoder.

As best as I can tell these are the hardware IDs and what they are:

The original product was directed to be very plug and play. It came with many connectors on it, and came with cables that plugged into the various USA Trains locomotives, and handled the unique high and low voltages found in USAT locos, and even the bipolar red/green classification LEDs as well as the common cathode LED setup. It was a great idea, but apparently considered too expensive. I think giving that up was a mistake.

This product was never sold, but I had one with all the adapter cables for the different locos. It was truly plug and play. You can easily see all the many connectors to accomodate all the different connectors in a USAT loco. The original large scale product was actually called the Revolution (before Lewis Polk's Revolution Train Engineer). There was a "magnum" version, which is the same decoder plugged into a board that connected the pins to screw terminal connections for use in any loco that did not have the Aristo socket.

The unit is a sound system AND motor controller and also controls the headlight and backup light.

The "magnum adapter" has no components on it, it just brings the pins to screw terminals. Only one of the two connectors has anything wired to it. The second connector gives mechanical stability, and was for future expansion (although Aristo sometimes wired things to that second connector).

The picture below is the QSI Revolution decoder: 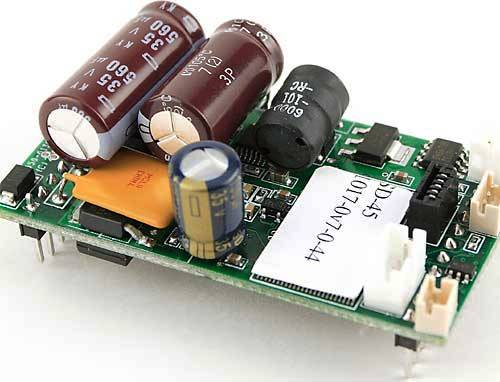 You can see the pins at each end that match the Aristo socket. This is an earlier version with the orange PolySwitch on it. Newer models do not have this. You can remove it and put in a jumper if you wish. Larger locos were tripping this PolySwitch, it was rated at about 2.5 amps. The "power sipping" Aristo mallet can "sip" a lot more than was thought. There are other overcurrent protection circuits that make the PolySwitches unnecessary.

The picture below show the "magnum" configuration, which is the SAME decoder in a socket with screw terminals. 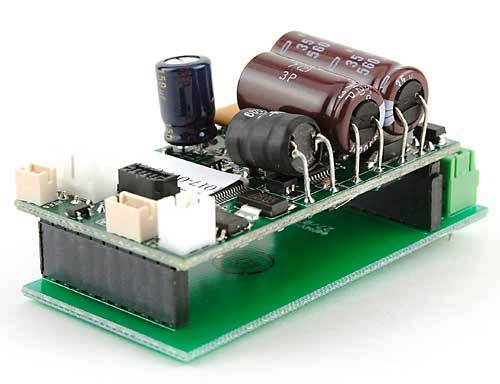 Unfortunately, this picture has the screw terminals to the rear. They are in the green housing on the far end of the unit. Remember, the main board is the SAME no matter what you buy or use.

The unit has down-loadable sounds and is very configurable. There is a programmer that is needed to download different sound files. All other programming can be done by a normal DCC system, or through the AirWire transmitter (see below).  Some programming can also be done in DC mode, such as volume, etc.

In DC operation, using the reverse switch on a power pack will allow remote control of the bell and/or horn/whistle.

In addition, for DC operation, there is the "Quantum Engineer"  that goes in series with your DC power pack and the track. It allows a number of programming functions, volume, consisting, and remote control of 30 different sounds.

Basically the QSI unit is a very flexible DCC decoder that also will run on straight DC and will interface to AirWire transmitters. The unit automatically senses DC or DCC.

Tony worked on improving the unit, and the big improvements were more lighting outputs, higher current outputs, and used of an improved ASIC that does much much more. It also incorporates screw terminals for the connections:

There are tons of lighting outputs, high current outputs for direct driving of the heating element in a smoke unit and the ability to pulse the smoke unit fan in synchronization with the locomotive drivers (autochuff) or a chuff switch.

A big feature is the "emulator" mode, which brings a unique level of authenticity to sounds, where the digital signal processing unit modifies the sounds to match load and other characteristics, as opposed to just playing a different sound loop, like the rest of the world's sound decoders.

This system is one of the few that can read the actual load on the motor and change the sounds based on it. Some units like Phoenix will do a good job of "faking it" by sensing the track voltage, or motor voltage, but only a BEMF-based system can really sense the load on the motor. The QSI changes sounds based on load, so going up a grade with a heavy load will result in sharper and louder exhaust notes and less load will make them quieter, and drifting will make it almost silent, as per the prototype. Diesels will also exhibit changes in sounds based on load.

There is also a command-able "Doppler shift" for the horn/whistle that simulates the change in frequency you would hear as a real train passed you.

The sounds (and the firmware) for the unit can be downloaded and customized with the programmer, about $90, which uses a USB interface on your computer (Windows only)

Once you have one sound file, you effectively have "everything" for that locomotive type, and you can change/customize, and save your customized files. At one time, there were many different sound files each with maybe a different horn, etc, but that quickly became too much for Aristo and QSI, so download ANY sound file into any pre-programmed decoder and then swap the horns, bell, etc.

The Titan also works with "ET" sound files, Emulator Technology, where the decoder actually modifies sounds with a digital signal processor (DSP) to match load, engine wear, temperature, etc. It's like an airplane flight simulator. The effect is beyond all other conventional "sound loop" technologies.

Typical decoders just increase the volume to simulate heavy load, where the DSP in a Titan can modify the sound like the real thing. This is especially evident in chuffs on steamers.

This is always a concern in G scale. From the very early days of DCC for large scale, we have been told we need a lot of amperage, that the stall currents of locos can grow to 30 amps.

I think that while you can make a loco use a lot of amps, but in normal running, most locos run 2-3 amps under a heavy load.

So, when the QSI Revolution came out, there was a lot of talk about it's capacity. I heard (not read) 2.5, 2.7 and 3 amps. It does not have big heat sinks, and I was very concerned.

The output transistors are rated at 5 amps, but heat dissipation will shut down the system at loads that high. For some people who have the decoders where there is a heavy load AND a big loco AND no air circulation AND a hot climate, thermal shutdown has been experienced. A small fan blowing air over the board will mitigate this situation. (This is not uncommon in the large scale world)

It turns out that the QSI has a good tolerance for high loads, and an on-board temperature sensor. I had no problems initially with any loco, but after starting to put loads on my locos, I had a few problems. So did another friend, Leonard Kerns, both of us were getting the power cutting out on the Aristo mallet.

Well, we checked temperatures, and there was some funny stuff going on. I did find that the 2.5 amp PolySwitch was bent over the output transistors, and it "got" some of their heat. The bottom line was that the PolySwitch was tripping prematurely. We bypassed it and not a lick of trouble since.

The later production QSI Revolution boards no longer have the PolySwitch, if you have one, remove it and put a solid wire jumper in it's place.

The lighting portion of the board for the Aristo locomotives has a 1 amp maximum capability, but (from their engineer) this means that incandescent bulbs need to be about 100 ma or less since they have about a 10:1 surge current.

The Titan has no such limitations, and will handle about 6 amps continuously, and 10 if you have a small fan. The output transistors can handle 60 amps peak.

If you want to use a smoke unit that has a "chuff input", the recommendation is to use an optical coupler with an open collector output. Get one whose input diode can handle the current from the fan unit. Put the fan through this, plus to coupler to fan to chuff switch to ground. Now connect the collector to P2 pin2 and the emitter to P2 Pin 1. Connect the "rest" of the smoke unit to track power.

I recommend using the "direct drive" capability, where the decoder drives the heater and fan directly, much better smoke and control!

This is described in subsequent pages.

Basically the QSI will run in many modes. In DC it runs fine, but you have to remember if you bring the voltage to zero the sounds stop. It has a microprocessor that needs power. The loco stops moving around 7-9 volts, the decoder turns off below that.

So, you just slow down until the loco stops moving, and everything will be fine. If you really dislike this, or are running an Aristo TE system that insists on reducing voltage to 0 before reversing, get the "super cap" add on, basically a small capacitor that stores enough voltage to keep the micro and sounds running for about 20 seconds with power removed.

Turn the Bell on with a Quick flip-and-back operation of the direction switch. Turn it back off by doing this again.

A fast reverse starts the bell, do it again the bell stops. Ray Shoop tells me that the bell trigger is 175 milliseconds, or under 2 tenths of a second.

So with a "normal" reversing switch, you can control the bell and the horn/whistle.

Another option on DC is the Quantum Engineer shown below. You put this between the power supply and the rails and it will let you control all the sound functions, it has a bunch of buttons for each sound. It can control 30 sounds! (It basically does sequences of polarity reversals) Unfortunately this box has a max of 2.5 amps, and will run to about 3.5 amps, so only one loco per track.

You can run the QSI Revolution or Titan on battery (or track power) and control it from an AirWire transmitter. There is also a "GWire" transmitter made by NCE that is compatible.

All the AirWire transmitters will work, but there are some limitations and caveats.

Read this page that is specifically on the QSI and AirWire, which also speaks to the NCE GWire throttle

To be used with the AirWire transmitter,you add a GWire receiver. It connects to the Revolution or Titan by a small flex 4 wire cable. 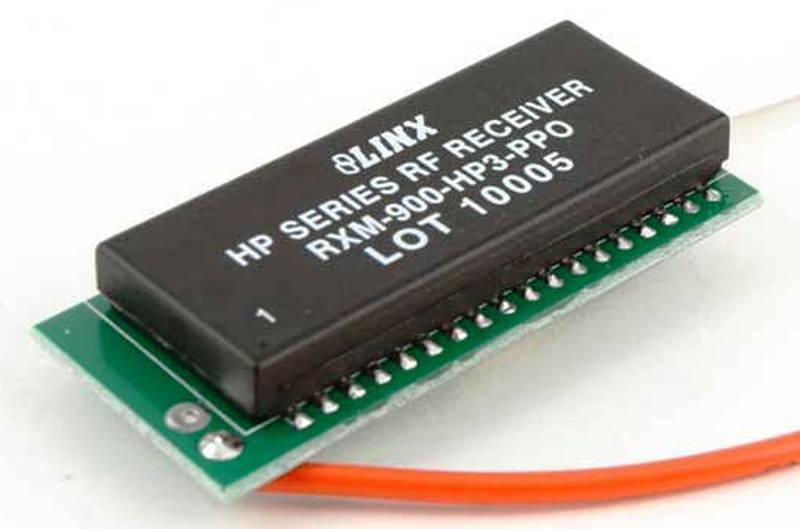