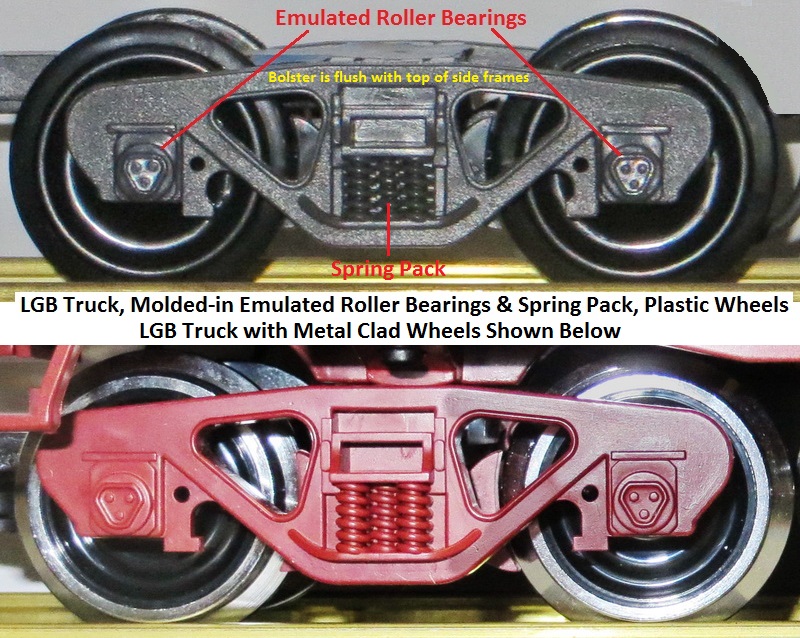 The German company, Lehmann Gross Bahn, (LGB) trucks to be described and illustrated are used on LGB's American standard gauge 1/29 scale cars.  A typical example truck is shown below. 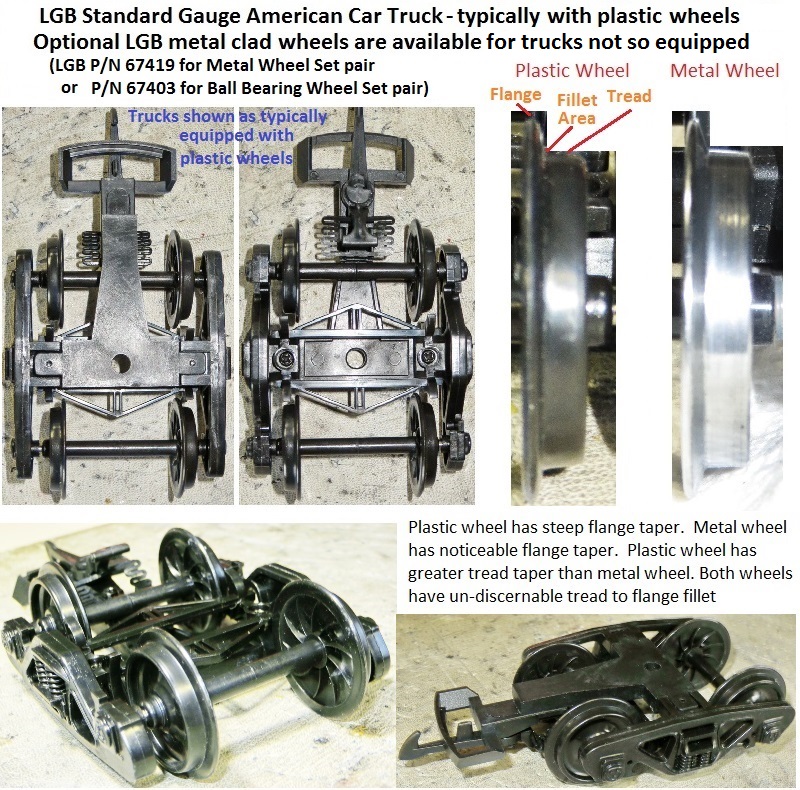 LGB's truck has molded-in emulated roller bearings and spring packs and as such do not mechanically function. 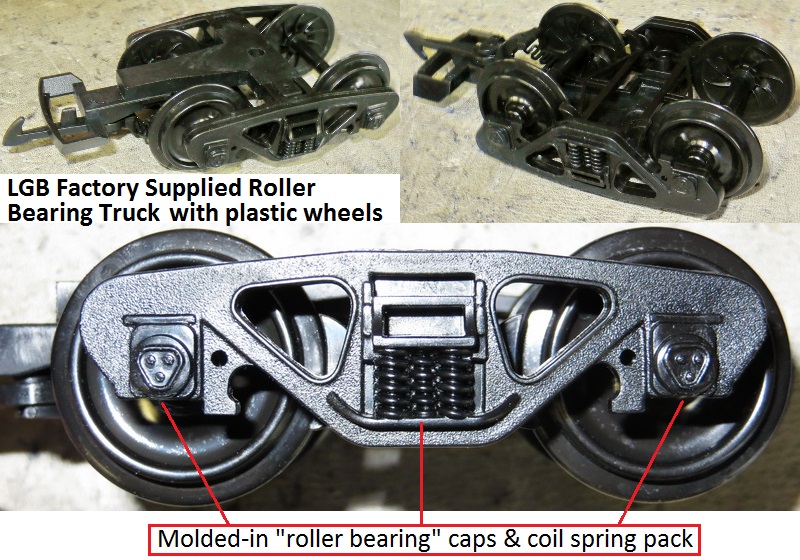 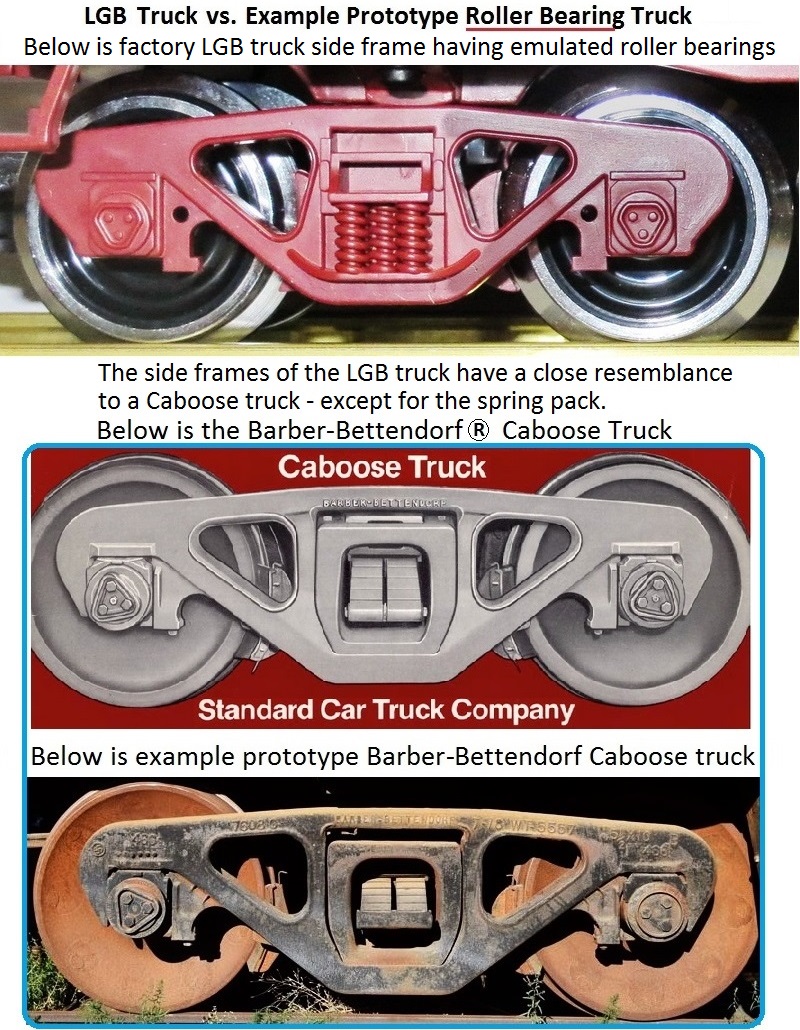 The closet resemblance of the LGB truck to a prototype that I found thus far is to a Barber-Bettendorf caboose truck, except for spring pack & longer scaled up wheel base.  So it seems the LGB truck is at best modeled on an obscure combination of prototype components. 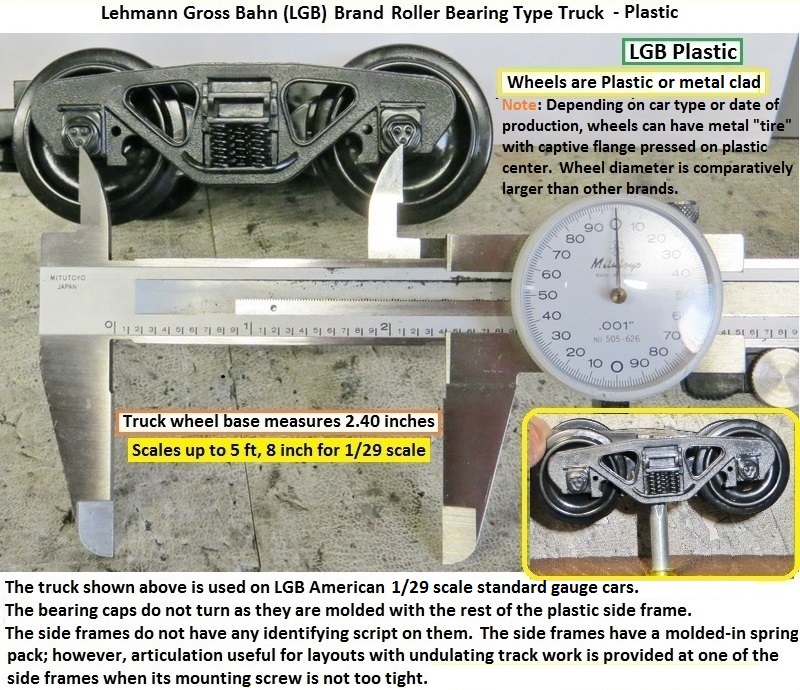 The LGB truck with some work and time can be modified to lower an LGB car for a more prototypical height from the railhead, particularly desirable since this facilitates installing Kadee body mount centerset type couplers.  The lowered truck as modified could, also, be used on other brand 1/29 scale cars when using body mount couplers.  Accordingly, comparisons are mostly made with an Aristo-Craft Barber roller bearing truck that serves as a "bench mark". 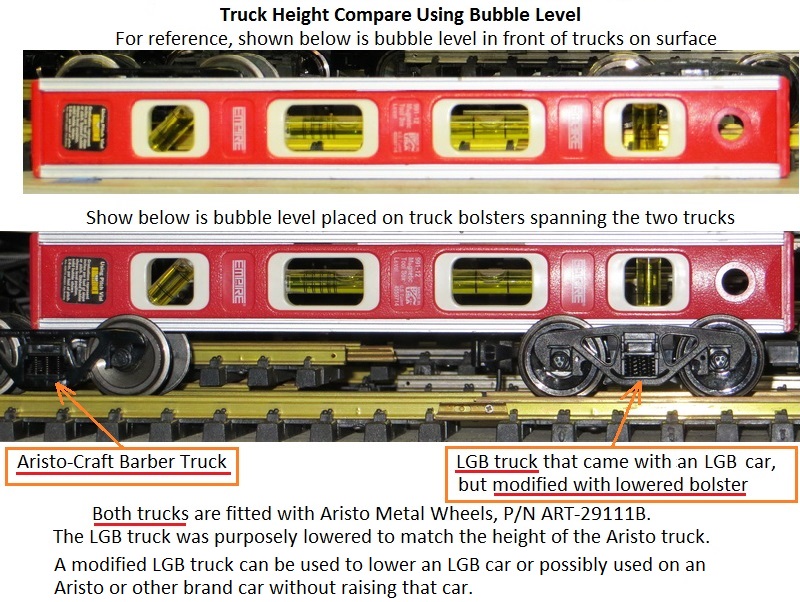 The essence of the modification is to lower the LGB truck's bolster (by replacing it) with respect to the side frames to be similar to that of the Aristo truck and many other brand trucks.

For example, by replacing the LGB truck's bolster it can be more like an Aristo-Craft truck.
Shown below is a measured comparison with respect to Aristo's Barber truck. 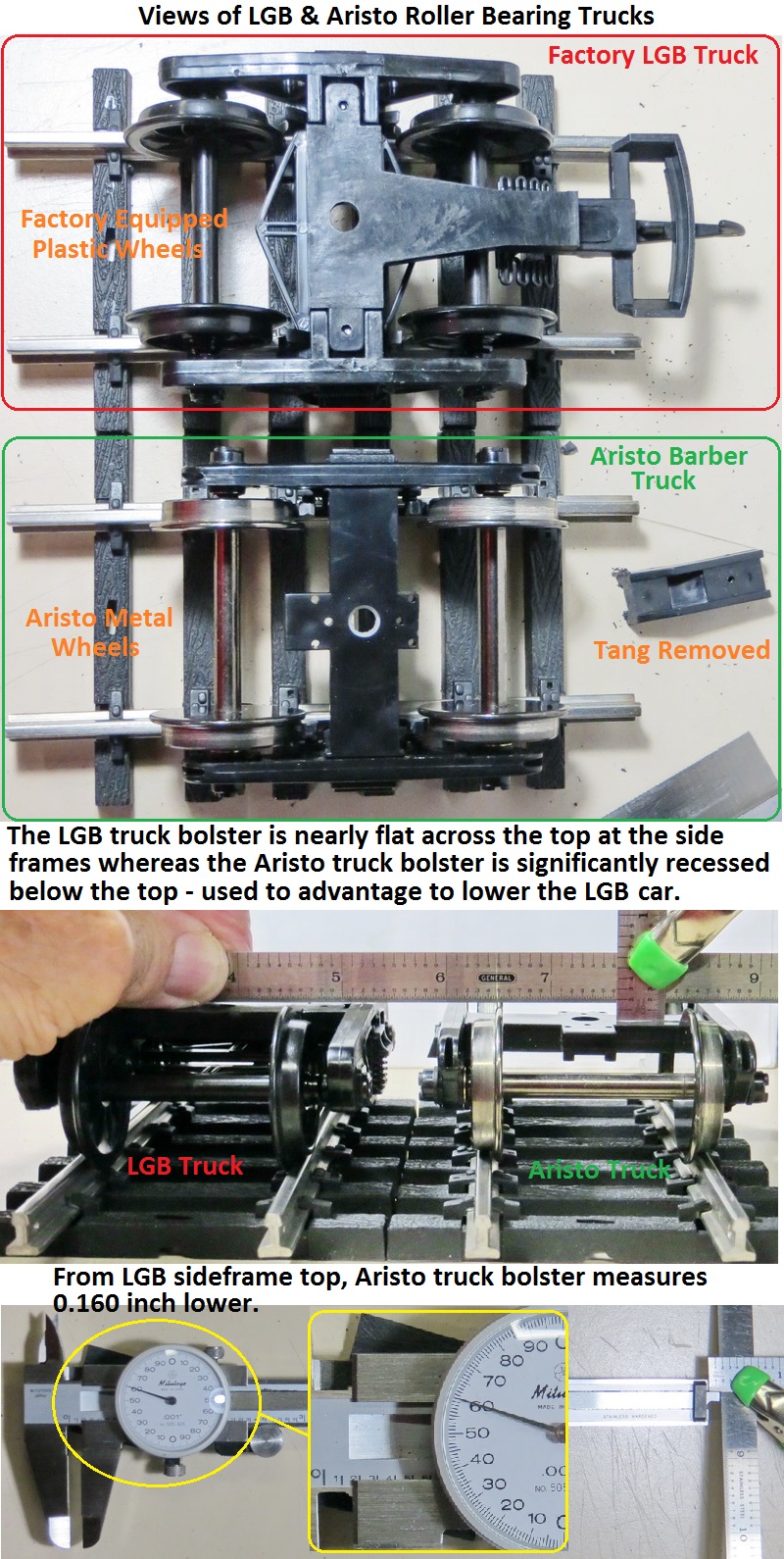 Shown below is a measured comparison with respect to Aristo's Bettendorf friction bearing type truck. 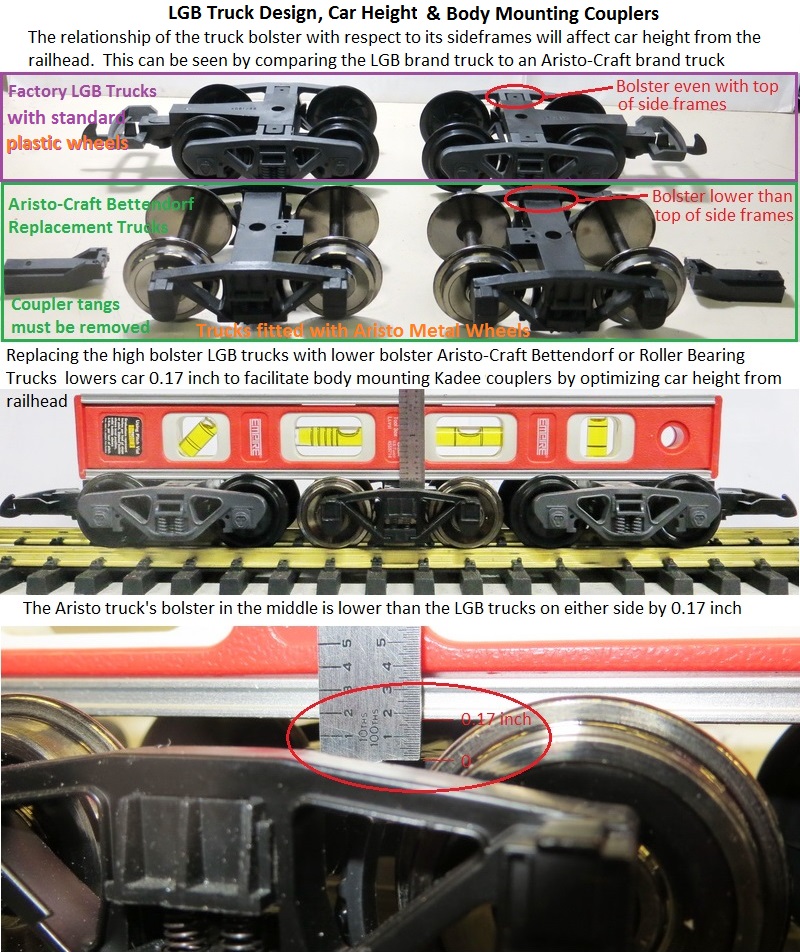 The LGB truck affords a limited amount of equalization by allowing one of its sideframes to vertically pivot with respect to the truck bolster so that a car can traverse less than ideal track work. 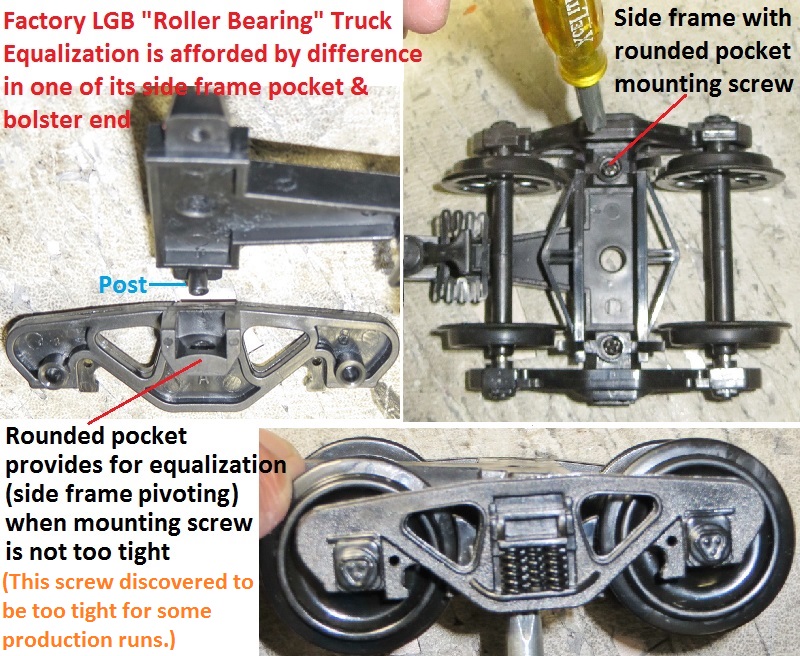 For cars equipped with modified trucks, the trade-off is lost equalization should a car be operated on poor track work.  By design, equalization is afforded in the factory LGB truck with one of its side frames having a crowned pocket that allows it to pivot with respect to the attached bolster, providing the bolster attaching screw is not too tight.  Some out-of-the-box LGB cars made in China exhibited this.

For example comparisons, other brands like Aristo-Craft & some USA trains trucks mimic prototypes by using miniature coil springs that when not too stiff afford equalization, whereas, some other USA Trains & AML trucks with molded-in springs virtually have no equalization.

Only the truck's sideframes will be retained.  Wheels will be replaced with smaller diameter and heavier Aristo-Craft metal wheels or other brand metal wheels that contribute to lowering a car.  Aristo metal wheels (ART/CRE-29111 types) are heavier than either LGB's plastic or metal clad wheels, and as such benefit the car's operational stability in a train traversing tighter diameter track curves. 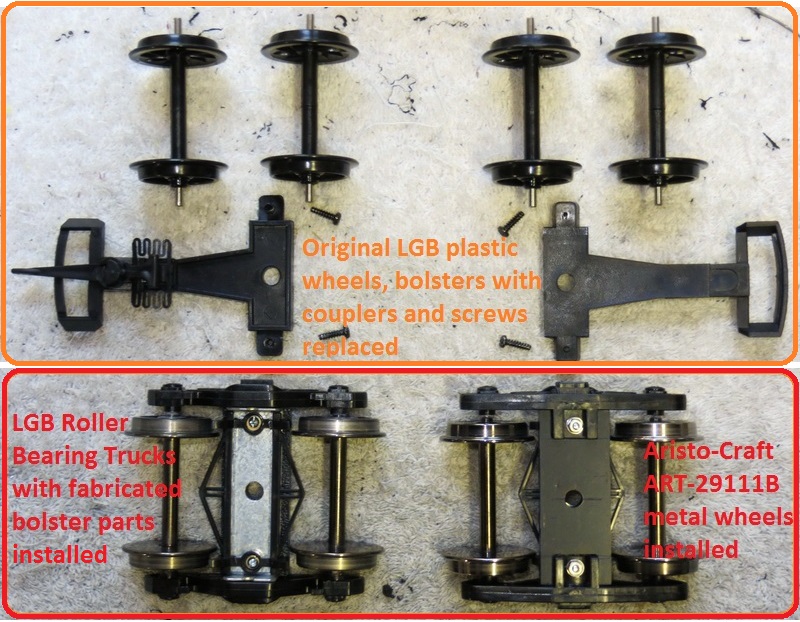 The truck is to be disassembled in preparation for later installation of replacement bolster components. 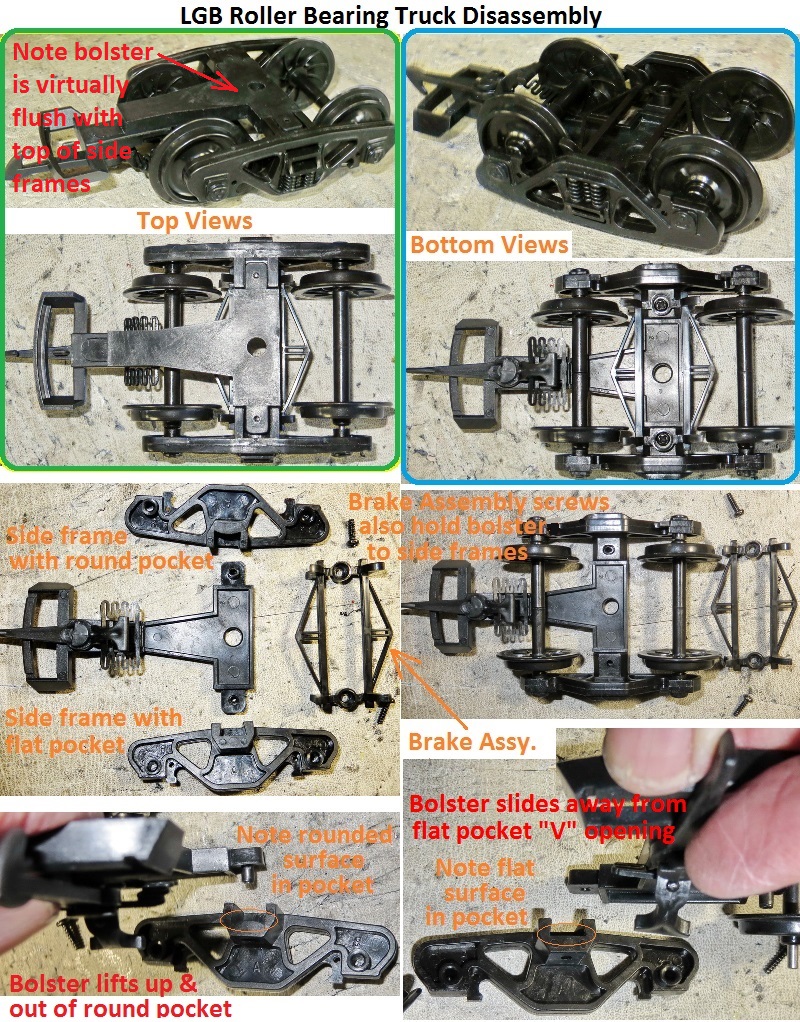 Illustrated below are dimensions of the replacement bolster that includes a metal bracket and plastic "H" spacer.  The bracket material is steel and the "H" spacer material is ABS plastic obtained from TAP Plastics.

LGB  cars requiring trimmed-off ribs include the 40 foot Boxcar, External post Modern 50 foot Boxcar and 50 foot Flatcar.  In this case, sideframe ribs are to be trimmed as illustrated below.  These cars are, also, described with body mounting Kadee couplers in respective "vignettes". 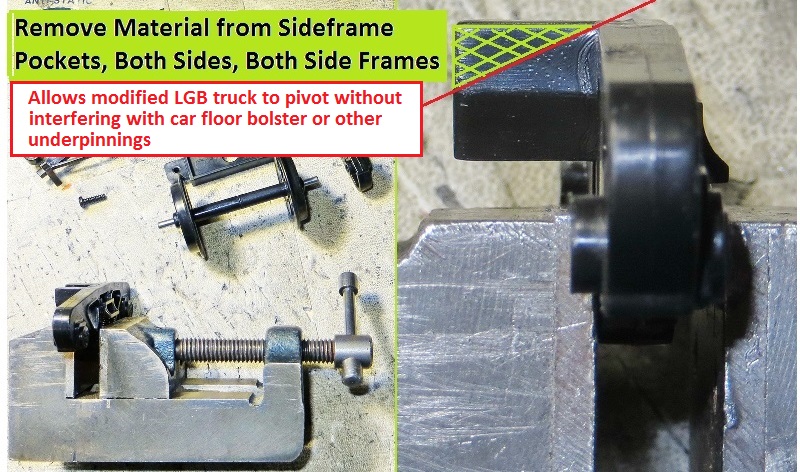 The illustration below includes perspectives of rib trimming and then assembled truck components. 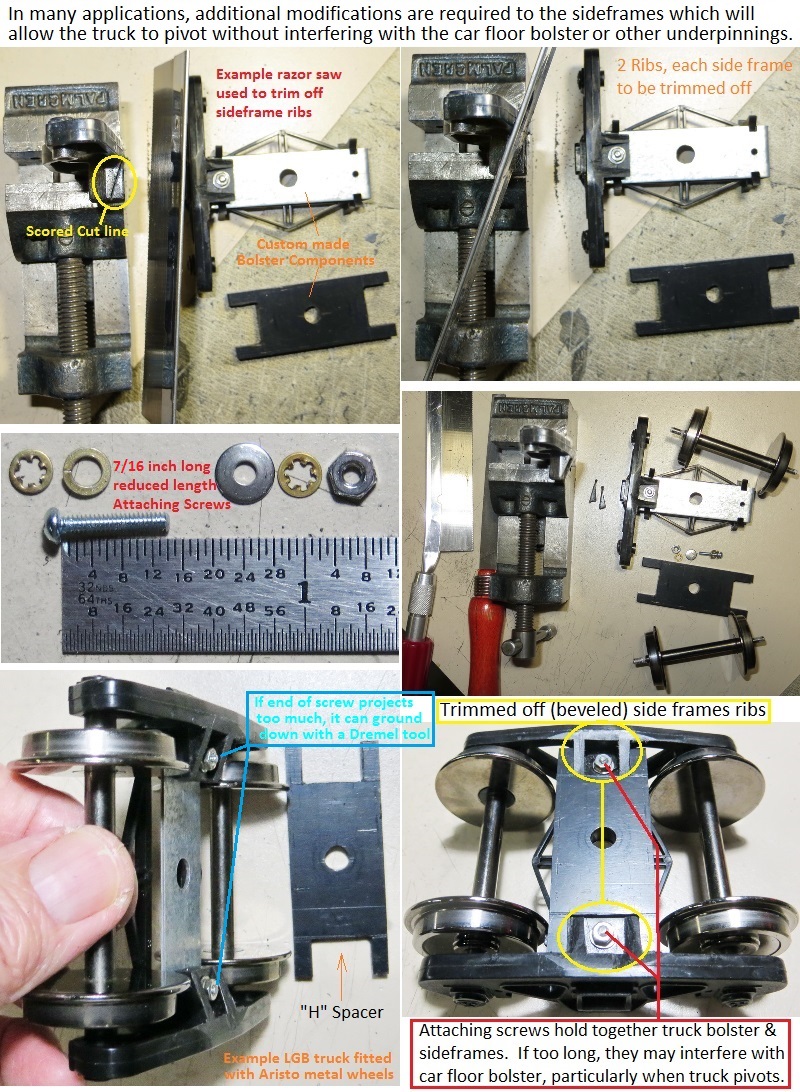 The truck is assembled with its bolster replacement components as illustrated below.
Note: Shorter 7/16 inch long screws are to be used in place of 1/2 inch screws depicted for side frames that must have trimmed-off ribs for car applications previously described.

NOTE: Should the circumstance arise, the modified LGB truck is restorable to its original factory bolster in unblemished condition - except for those that required additional sideframe rib trimming.