In Phoenix, they were introduced with arch bar trucks. That is wrong for the era of this car, and I did not buy one, even though I wanted one.

The cars looked beautiful otherwise, but I held off.

In 2009, AML released them to the general public with the correct trucks.

But there are several goofy things need to be corrected, simple to do.

Be sure to visit Ted's vignette on this car: CLICK HERE

To get the car floor at the right height for Kadee 830's (or maybe because of the change in trucks) AML has introduced a thick washer between the car floor and the truck. The appearance/height of the car looks fine, but this causes some other problems. The picture below shows this washer. 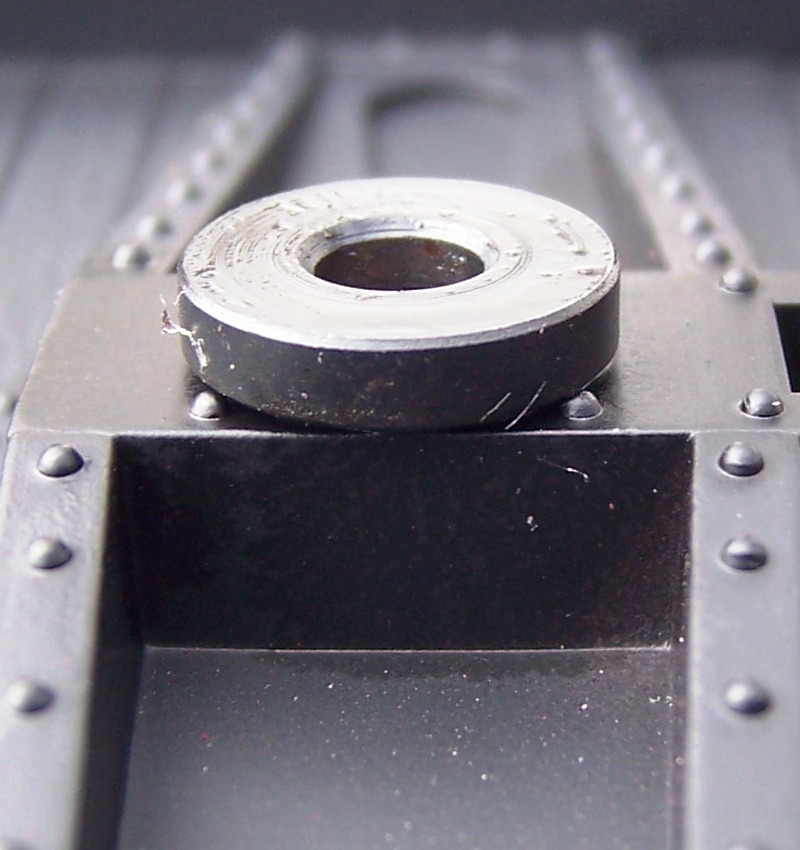 In the picture below, it shows how the washer now causes fewer threads on the screw to be available. This can be a problem for strength, but I have had no failures. It does make the assembly a lot harder, and in one case, the captive nut in the car floor was pushed in, and I could not engage the nut. There was a simple solution: I threaded a longer screw into the nut and pulled it back into position close to the bottom of the car floor. 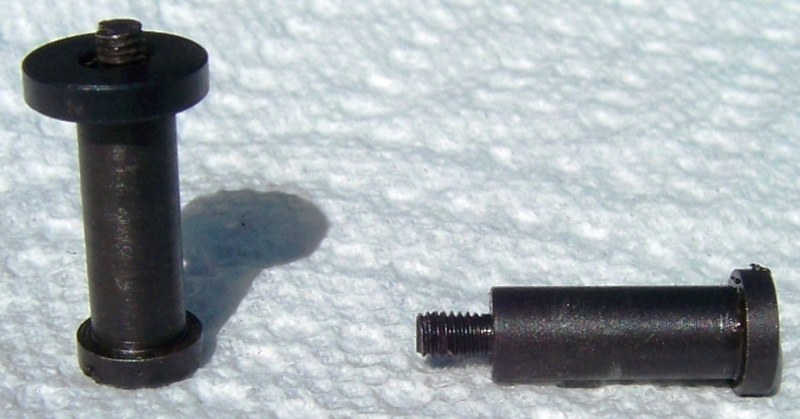 The truck is also weirdly mounted for a piece of rolling stock. Normally rolling stock manufacturers use a raised boss on the car body, put the truck over it, and put a screw with an integral "washer head" on it. By selecting the boss height properly, this gives the proper play side to side, and sometimes they put side bearings on the bolster to limit side to side sway.

The AML stock cars have a long screw with a light gauge spring between the truck and the shoulder of the bolt near the head.  Basically if you pull on the truck, there's almost 1/4" of play.

The spring being light gauge allows the car to rock side to side like a drunken sailor. In addition, the light tension allows the body mount couplers to pull the car significantly inwards on curves: 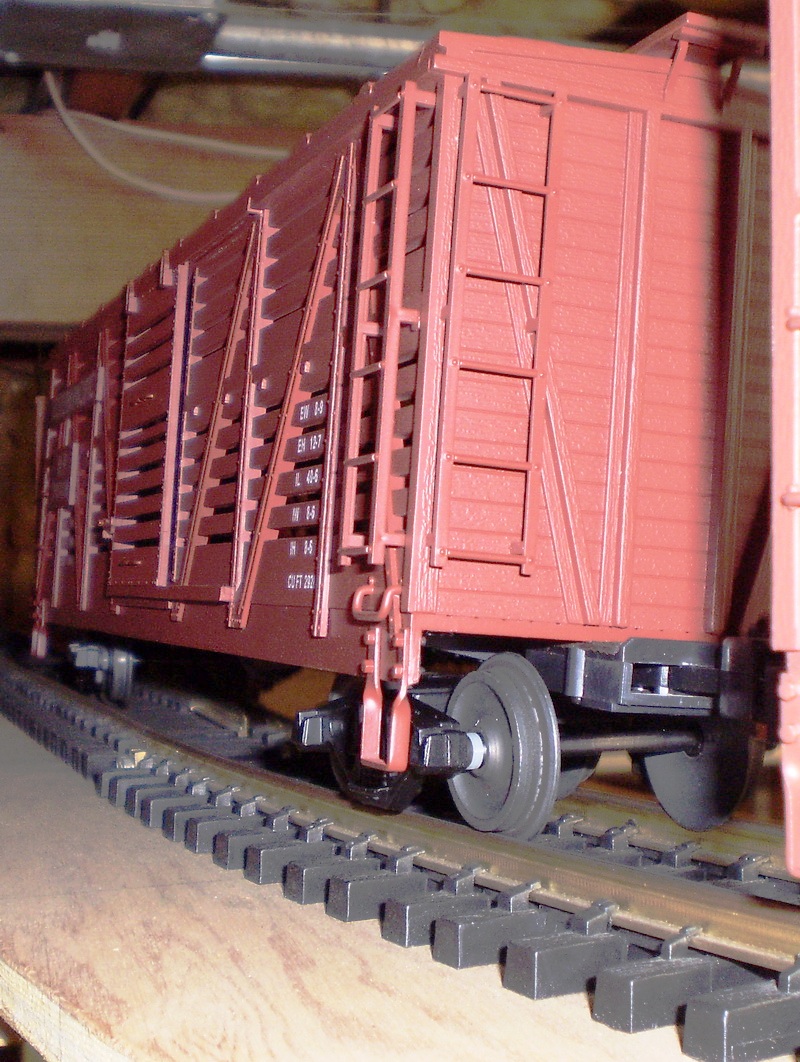 In addition, the washer added between the truck and the body allows fewer threads to be engaged. This makes assembly tricky, and in the case of one of my four cars, made it so I could not re-engage the screw once it had been removed.

I found that the captive nut in the floor of the car had been pushed in just a bit, and the fewer threads available made for no possibility to catch the threads.

I managed to pull the nut back up into position, and wick some AC into the mounting area to hold the nut in place.

Luckily, it's easy to correct the problem. I added 3 stainless steel washers under the screw head. I picked the total thickness such that basically the spring was completely collapsed with just enough play left for good operation.

These washers totaled .178" in thickness, stainless steel ones found at Home Depot, just take the shouldered screw with you to find something that will just slip over the thick body of the screw. Anything from about .178 to .165 works.

The good news is that the Kadee mounting holes are there, but they are too close to the end of the car body, so the draft gear sticks out way too much, like a hydra-shock box car.

Re-drilling the holes solves the problem, but, this is where someone just running ONE car before releasing them to the public would have avoided the problems. I just repositioned the Kadee 830 flush with the end of the car, centered it, and drilled a #53 hole at the back. I then screwed that screw down, and made sure the box was still centered with the axis of the car.

I then drilled the 2 other holes. Note: the 3 stock screws supplied are just barely long enough to hold in the plastic, so don't drill larger holes and DO NOT overtorque them! If you strip the holes, do not despair, use the long stainless machine screws that come with the Kadee 830's. 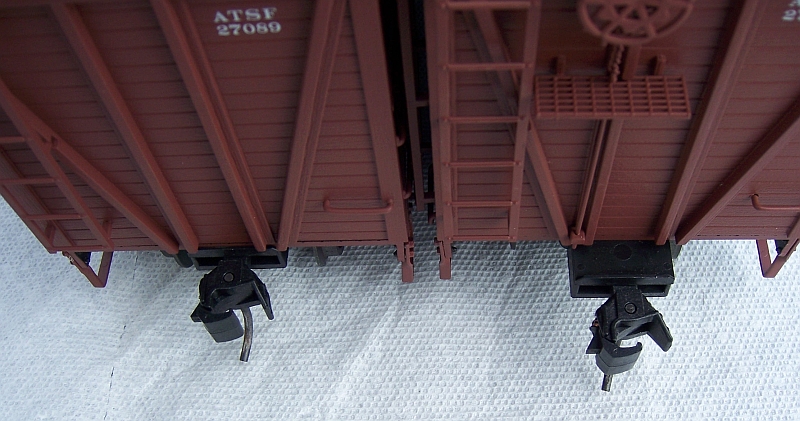 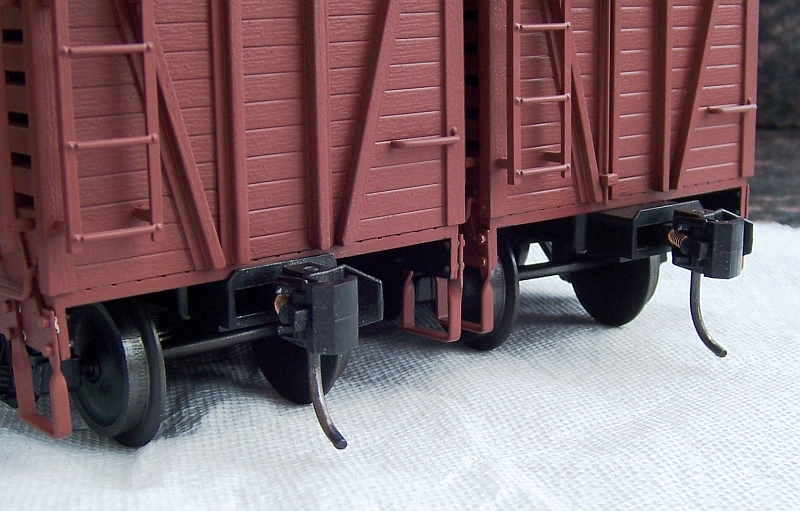 It has the typical AML wheels, with rough surfaces and some factory blackening on them. My trucks also came with the journals completely dry of lubricant. On metal to metal, I use light oil, I find it works better than graphite, which I use on plastic journals.

After these mods are done, it's a beautiful car, with much nicer detail than the only other stock car available, from Aristo.

Overall I like the cars, especially the detail level, but AML, you can do better on the niggley details!

A little more attention to details would have made it perfect out of the box like your other 1:29 cars.

Also, please take a look at lubrication and the wheel tread surfaces, they can be improved.