These are nice looking, well proportioned locomotives. They are available in 2 road numbers (24 & 26) for Santa Fe red warbonnets, with the prototype ABBA "LABC" numbering, L=lead, AB are B units, and C is the trailing A unit. They run well.

Earlier units have a small square "pancake" smoke units, which are just heaters, and these burn out if they run out of fluid and are not great. The newer units have fan driven smoke units that work very well and supposedly have low fluid shutoff. Don't run either of them without fluid. The mounting is the same for both types, so you can retrofit the newer smoke units.

There are 2 lead weights in the chassis, that weight exactly 1 pound each, the loco weighs 6.9 punds. The prototype weighs about 230,00 pounds which would scale out to 9.4 pounds, so 2.5 pounds could be added to bring to prototype weight.

How to pick them up:

No kidding! The first thing I noticed is that you need to be careful how you pick them up! If you do what I did, your fingers will either stress the nice grillwork on the upper sides, or you will hear a "pop" and "klink" as a clear plastic window pops loose and rattles around inside!. The windows in the doors are also not well glued in, and you can also dislodge the doors easily.

Pick it up by scooping it up by the "belly" / fuel tank. Keep your hands off all the nice detail!

Working on the trucks:

The motor blocks have no suspension. The axle tips ride in metal bushings in the sideframes, and the sideframes are part of an "A frame" that mounts and swivels in the chassis.

To pull the trucks apart or out of the loco, you don't need to remove the sideframes, or even the A frame from the loco.

One option is to pull the journals out to let the axle tips out. Do one by one and just enough to clear the bushing.  (I've never broken a sideframe, but some people worry). Then when you get the other end of the axle you can swing the block out. Remember the wires are still attached! Now you can remove the screws to work on the bottom cover. If you remove the wires BE SURE to tag them. I leave the wires on because it is REALLY EASY to mix them up. The 4 pins on the motor block are for the power and motors.

A second option is to leave the motor block in the journals, and just remove the bottom cover screws.

When you remove the gearbox cover, the brass axle bearings will pop out of place. They are squared off, and go with the flat sides up and down. Of course as soon as they get loose, they turn 45 degrees and won't go back in. Put the sideframes back on first, then with a little prying up of the wheelset, align the bearings, and then the gearbox cover will go back on. If it does not pop back in place with light finger pressure, the bearings are not in right. Take the cover off and do it again.

Note well: Symptoms of not getting the bushings back in right:

You have been warned!

Both the A and the B unit use the same pedestal to mount the couplers.

On the A units, the front coupler is a dummy, and really does not swivel. Also, on the bottom of the coupler is a small loop that engages the cut levers.

Below, you can see the pedestal with the dummy coupler: 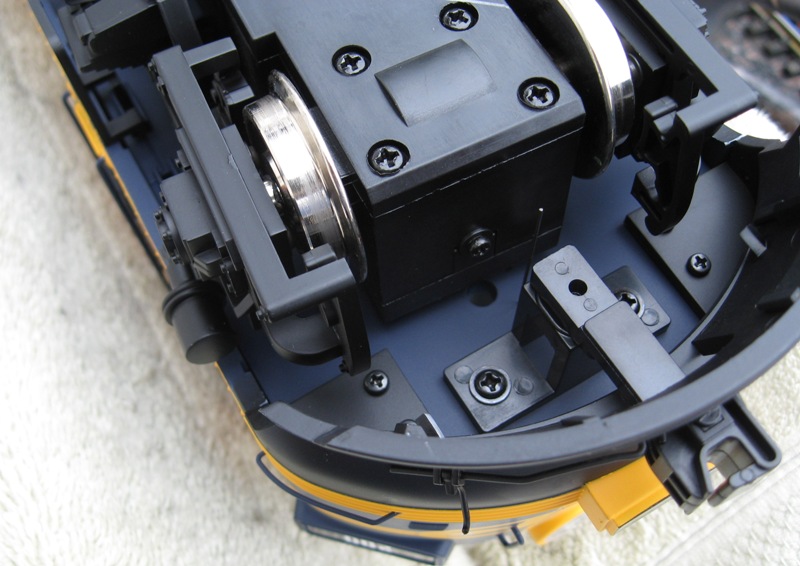 The mounts to the stock pedestals requires a large offset coupler in the rear, and a medium offset at the front of the A unit.

This conversion just does not work well, and looks terrible. In general offset couplers will be forced downwards under tension, not only causing uncoupling, overriding but the uncoupling pin will catch on switches.

(As an aside, this can cause one of the typical poor choices in the hobby... Kadee couplers, given a good solid mount are great couplers, given a crummy mount, then you have issues, and then you get the "I cut all the uncoupler arms from my couplers", or "Aristo couplers work better", or whatever... very similar to the battery powered converts that did a crappy job on their track wiring in the first place, and instead of doing it right, gave up)

One thing does need mentioning, in the conversion, you trim the end of the swivel "tang". Cut it just behind the round end at the tip. Use the standard 831/900 coupler, but you need to trim the end of the silver screw before you assemble it, otherwise the screw is too long, and sticks into the pedestal, and the coupler won't swivel. (not mentioned in the Kadee conversion instructions). Note that the swivel "tang" is thinner on the A unit pilot, so your screw trimming needs to be more accurate. Trimming the screw gives you thicker thread diameter through more of the "tang", thus more strength. Colin Camarillo and Ted Doskaris have collaborated on designing and producing a line of Kadee conversions, that have more secure mounting, and use centerset couplers for better performance.

Highly recommended, please see my page on this, and also Ted's detailed vignette on the F3.

The installation kit uses Kadee centerset couplers (no offset) and the Kadee "lid" and replaces the USAT pedestal and the Kadee draft gearbox. Also, this body mount is much more robust and close couples the cars. You do need to file down the pilot opening a bit. It's worth it.

Do yourself a favor and body mount your couplers. Here's a link to Colin's site:  https://www.camarillopacific.com/campacbox/

Basic wiring information for DCC or other decoders.

The trucks have 2 sets of wires that come from each truck. They go to black 2-pin connectors and then to the circuit board. The 2 connectors for each truck are opposite sex, so you cannot plug the wrong ones together.

There are 2 boards in the chassis, one is the primary power board, and the other is a regulator board for the smoke generators.

Everything is incandescent lamps except the red/green classification LEDs in the nose. These are bipolar T3 leds. Wiring these for a decoder is a pain, best to pull the lamps and replace with different common anode LEDs, since they use weird voltages.