This is for large scale trains, and variations of this socket have turned up in Bachmann products.

I'll try to give some history at the end but basically this was first produced by Aristo Craft and only recently Bachmann has taken the basic pinout and modified it. In addition over the years, Aristo has informally added some functionality, but not on a published or consistent basis.

below is the link from the Aristo site:

From this page are the PIN designations

There are 2 rows of sockets, with 0.1" spacing. One row has 12 "holes" and this is about the only "standard" part. The second row was for expansion and also mechanical support. 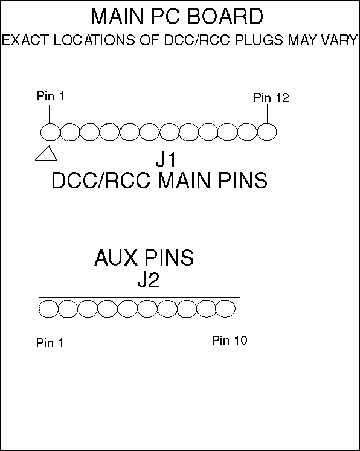 On the Bachmann implementation, Bachmann locos EXPECT to see positive unregulated rectified track power (or battery) on J1-6. (as with all DCC decoder connections, this is also the common for function "outputs").

If this power is not supplied to these pins, the lighting does not work.

On most Bachmann boards, if you have a decoder that violates the Aristo specification (Like an Aristo Revolution sound decoder HAH!) rather than try to feed the socket directly, you can feed power to the B+ and B- terminals on the Bachmann main board.

Digitrax decoder, DG583AR has a pin missing #7 and #8 is marked not connected.

This can cause 2 problems, lighting not to work, and smoke not to work. This seems a silly way to address the problem, but my opinion is that early on, Digitrax interpreted the "Aristo standard" in their own way, which led to electrical issues that destroyed the Digitrax decoder. Rather than use the socket as documented, they told people to just bend the "offending" pins up so they would not enter the socket... well this led to the current situation since not everyone followed the instructions.

A simple design change would allow things to work properly.