I bought this from an Accucraft dealer who kept his eye out for interesting brass locos.

It's very cute, and I have put DCC and sound in it. I'm using a HO decoder by Zimo.

This rail truck was used in Colorado, and is a faithful reproduction of the prototype, which still exists and runs.

Eureka had to depend on wagons to freight the product of the mill to Silverton in the early days. In 1895 Otto Mears formed a new railroad that would serve Eureka and eventually neighboring Animas Forks. The Silverton Northern ran its new line to Eureka and greatly reduced costs of transportation. The railroad ran passenger service to Eureka allowing the miners and mill workers to live in Silverton. In the final years of operation, the SNRR operated a railcar that was unique in design and a favorite of the miners. The little railbus was called "The Casey Jones." It was built in the shops at the Sunnyside mill in 1915, and could be seen at the San Jaun Historical Society's museum in Silverton.

The Casey Jones was built in 1915 out of a model T, and is one of the predecessors of the famous "Galloping Goose" types. It was originally built as an ambulance servicing the Sunnyside mine in Eureka, Colorado.

It was often used by mine officials to commute to Silverton. It has room for 11 passengers. Later in life it was used to haul miners to town for Saturday night attitude adjustment, running on the Silverton Northern.

The Casey Jones is currently owned by the San Juan Historical Society.   In the summer months it is on a siding near the Silverton Depot and in the winter it is on display at the D&SNG Museum in Durango. 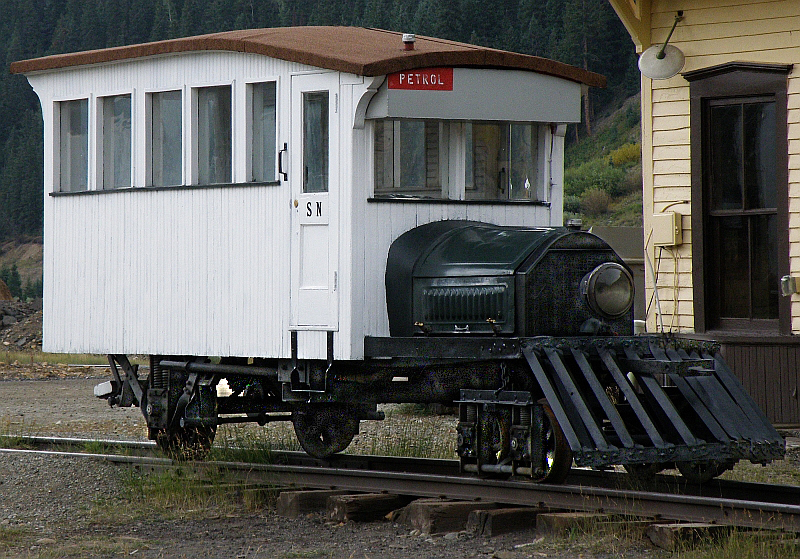 The model was released mid 2000 I believe. It's made from brass, and the doors and the hood all operate/open. It has stainless steel tires on the wheels. 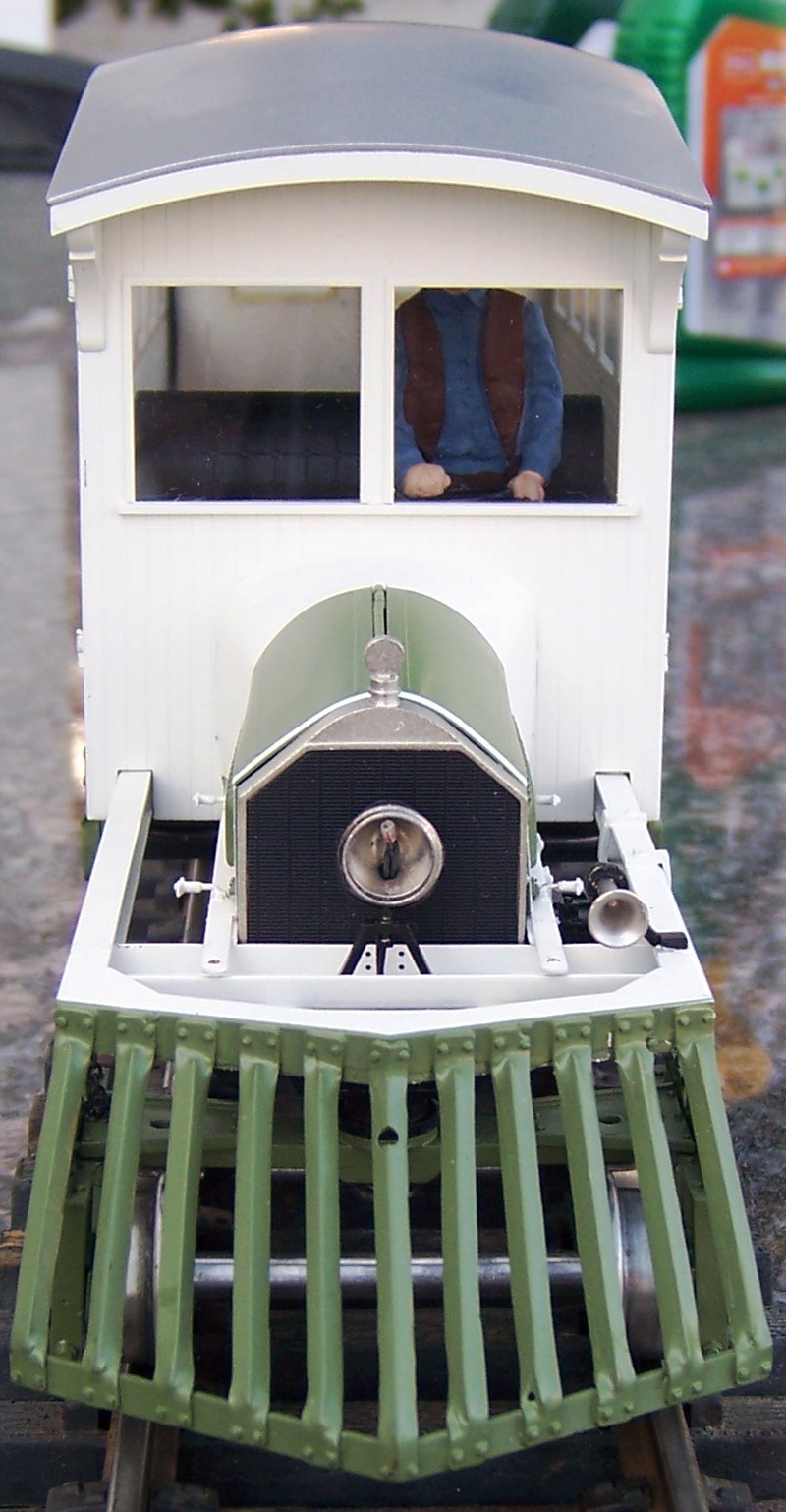 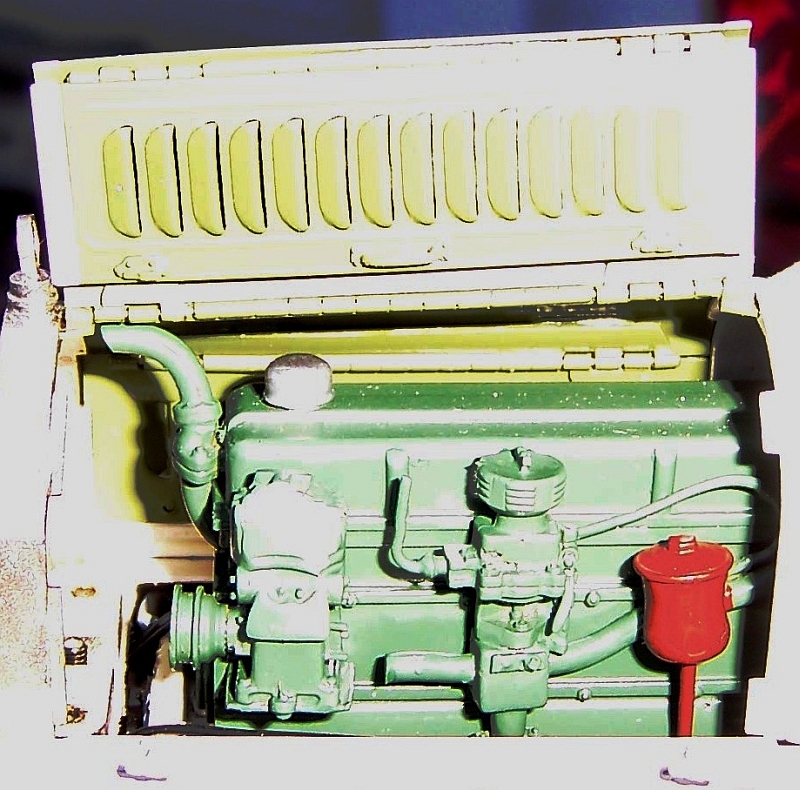 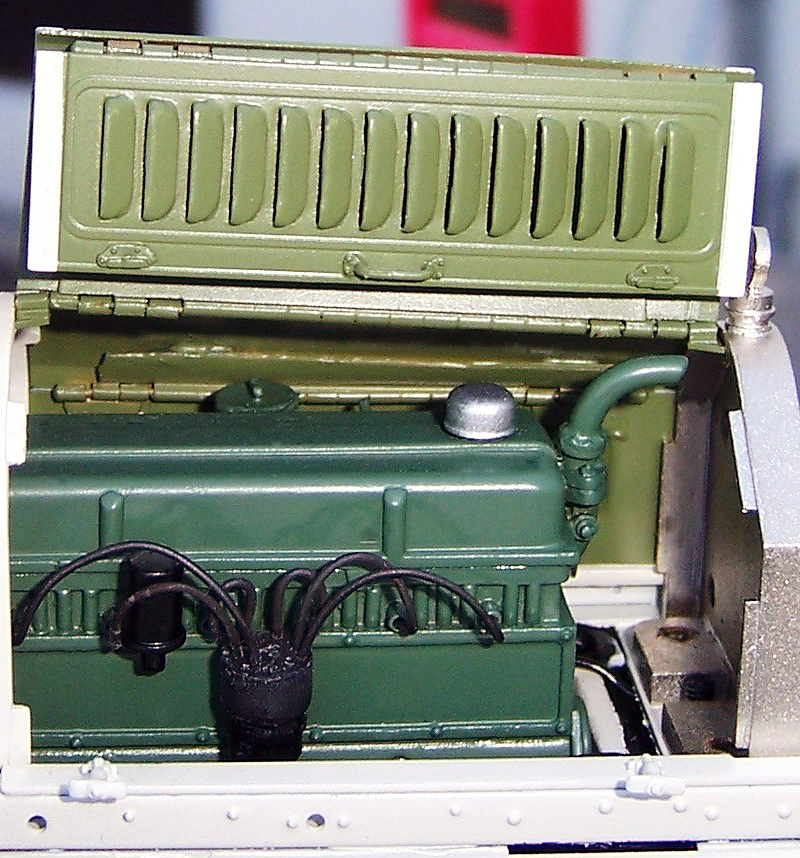 Carefully pull the chassis up out of the body. The hood will come off. You have to work a bit to clear the front foot stirrups.

As soon as you get it open carefully unplug the small 2 pin connector that runs the interior light. 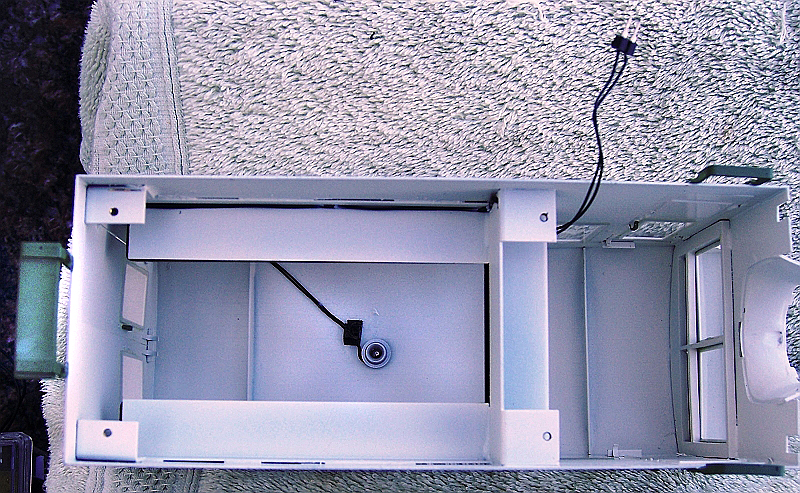 After opening, you will be able to see into the back of the cab seat. There is a voltage regulator in a bunch of shrink wrap, and it is held in place with double stick tape. I worked it loose by pulling up gently and using a small screwdriver to break the sticky stuff apart. 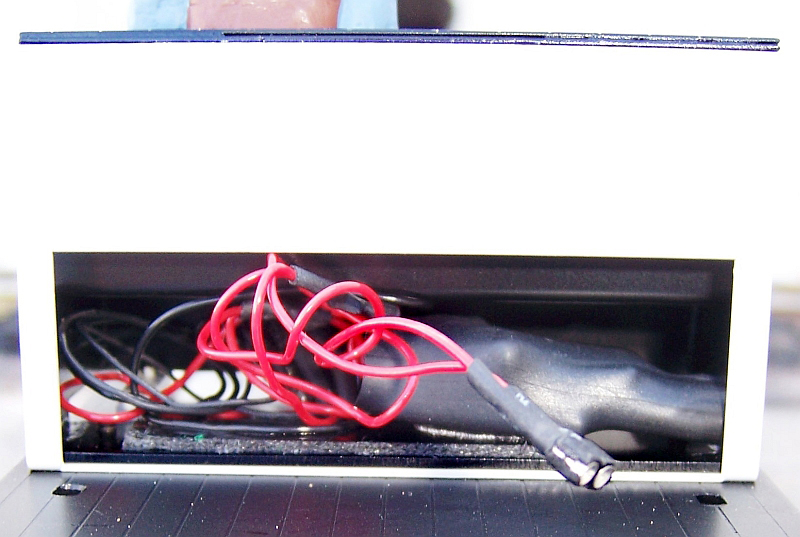 After you pull everything out CAREFULLY, you see there is a fair amount of room under the seat.

Originally, I thought of using an HO Soundtraxx Tsunami, and possibly the new Locsound Select. The Locsound select  is 1.41” x 0.61”, and the Tusnami is 1.68” x 0.68” x 0.25”, so either would fit. I tested the Tsunami on my layout, and was very disappointed in it, it cannot handle my track voltage, and even after reducing the voltage, the darn thing would go into overheat mode on even light loads. It's just not up to the published specifications.

Then, hopes were on the new ESU select, but after waiting almost a year, the one with the goose sound was still not available, and would also have required another programmer. Luckily I called Axle at Train-Li, the importer of Zimo, and a new HO decoder has just come out, the MX642, so bought one.

Now you need to remove the little guy and his seat. Two screws underneath, and the seat and base come off. Put the 2 screws back into the assembly so as not to misplace the screws, and also get the right ones, seems that every screw is a different length on this loco!.

So now I have 2 wires coming out of the small hole in the chassis. One is from the track pickups and the motor (red and black) and the other is from the headlight. Crap, now I have more work to do. Underneath the hold is a small metal housing that not only holds the motor, but all the wires disappear into!

I'll save you some grief right now and give you the proper order to take this apart, since I tried to remove the housing first, and found all the wires that went into it had no slack!.

First, remove the motor block, there is a single screw underneath, and it comes off. Put the long screw back into it for safekeeping. In the picture below, you see the motor has been removed, and there are wires on each side. 1 on the left, and 3 on the right. The left wire is a track pickup wire, and the 3 on the right is one track pickup wire, and 2 wires for the headlight. 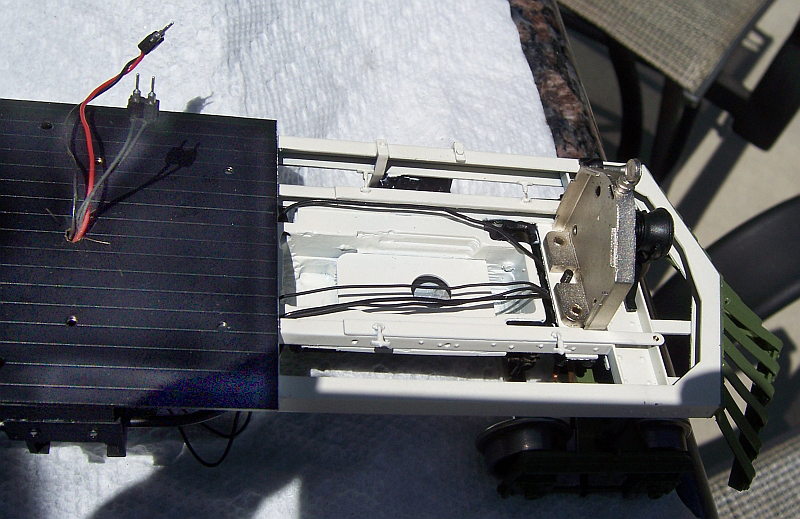 Now remove the screw and spring that holds on the front truck. BE CAREFUL! The front truck is still secured by 2 small chains to the chassis. Under the screw/spring, you see that the black strap that is under the screw/spring and goes out and braces the bottoms of the sideframes is really 2 independent parts. With a small jewelers screwdriver, lift one half away right where the screw goes. Then they can both be swung up and away. Now, you can reach the 2 small screws that hold the power pickup wipers. Remove these and reaching into the engine compartment, get yourself as much slack as you can. 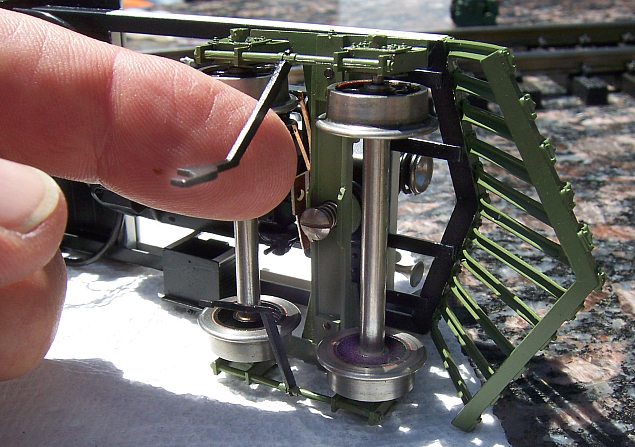 Now, finally remove the 4 screws that hold the square enclosure on. Don't try to remove it yet.

Now move the enclosure to put some slack in the brake cable. See the little black wire that goes on the pulley? Just lift it carefully off the pulley. That will give you some more slack.Now play around with the enclosure so that the universal joint detaches. Once you have done that, use a small screwdriver to pop off the piece left on the motor shaft.

Finally, you can maneuver the enclosure back and forth and free it enough to look inside. 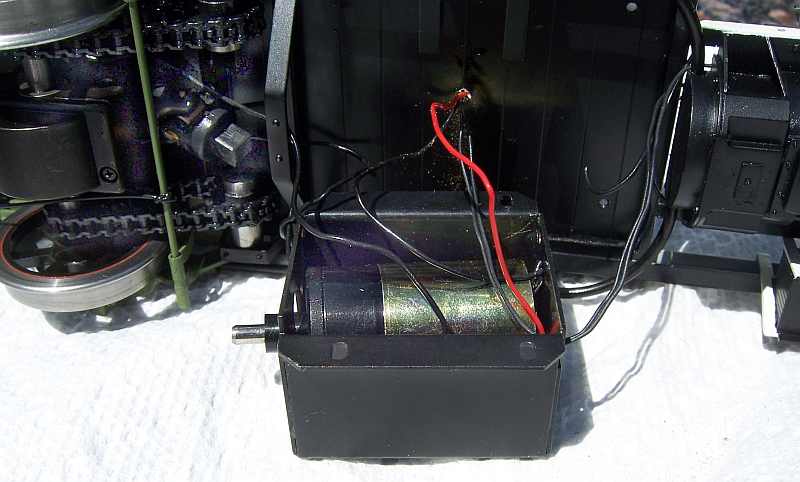 What you want to do is carefully get an X-acto blade in there and cut off the 4 pickup wires, but not cut off the black and red wires going from the brushes through the chassis to the 2 pin connector.

When you are done, you have 2 wires to a connector for the headlight, 2 wires from the motor, and 4 loose wires for the track pickups. Now you need to open up the hole in the chassis to fit 2 more wires through. I took it real carefully and slowly opened it up with a needle file. You could drill another hole, but then you need another hole in the base of the seat, and also this gave me an opportunity to get rid of the sharp burrs left on the original hole. 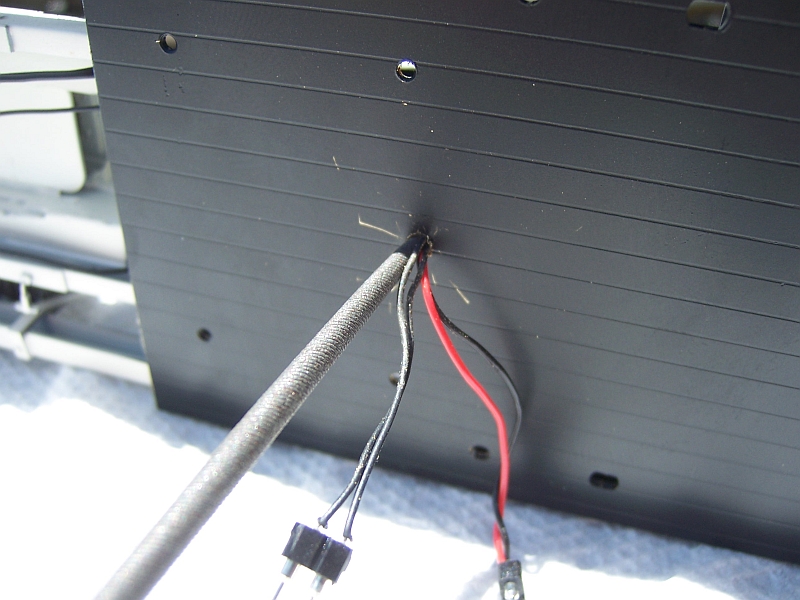 Now the next thing is how to add speakers.

Finally I settled on trying to put the speakers in the roof. To keep a low profile, I decided to put them in the center, where the roof is "deepest". I got 4 Visatone K23sq speakers, which are  23  x 23 x 9 mm deep. They are 8 ohms, and 1.5mm thick at the edge.

The decoder will fit in the space under the seat:

Turns out the back of the seat (upper half) is hollow and will hold the decoder, and the lower area holds all the wires and the "hold up" cap: 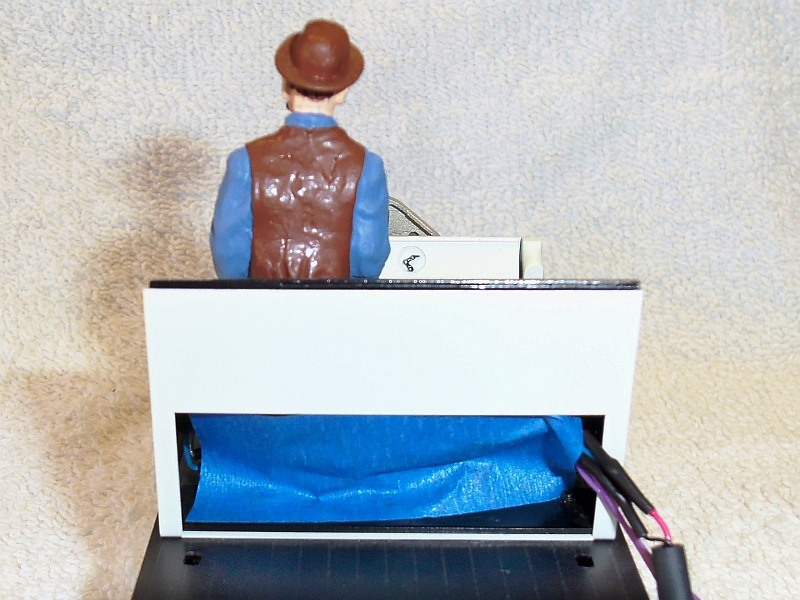 Lots of room to spare.