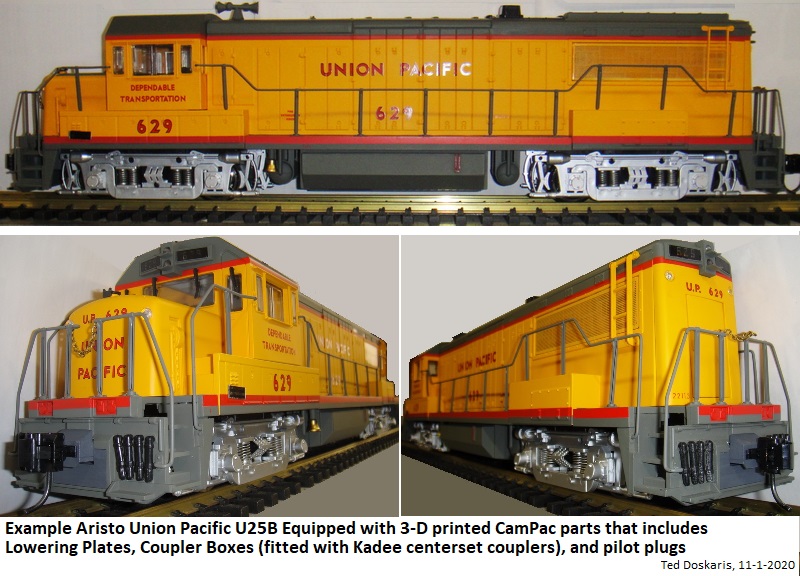 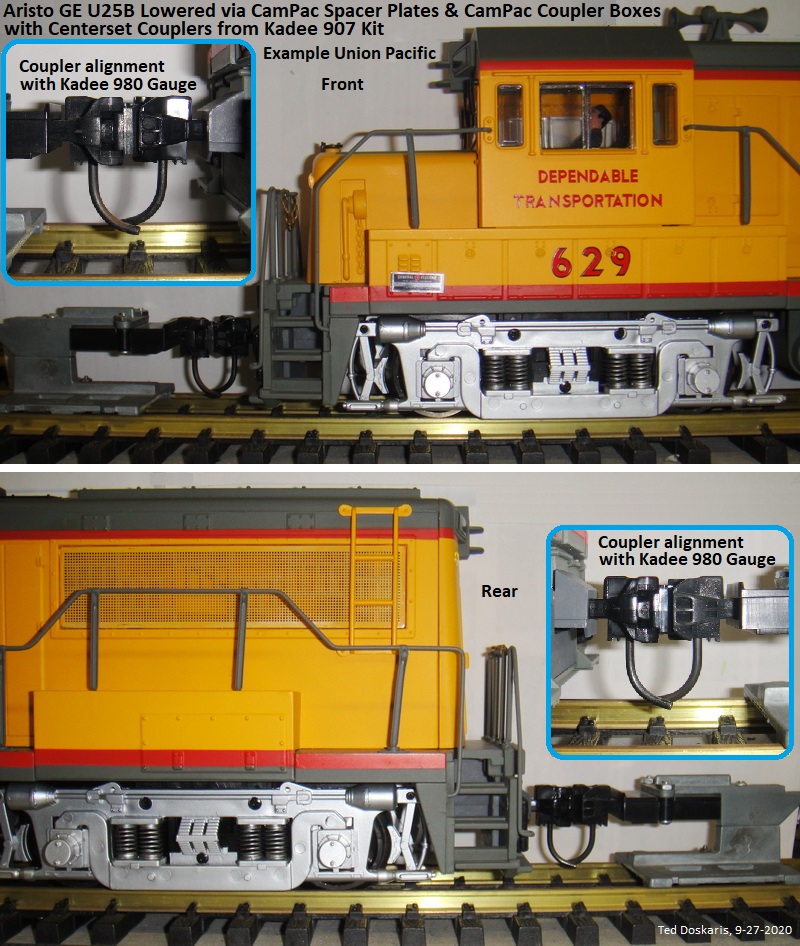 Lowering the loco not only affords stability but is more prototypical, too.

The two pictures below show the Aristo GE U25B as received from the factory - before being lowered, etc.

Notice how high the loco appears to be from the railhead with pronounced spaces at its steps and between trucks and body. Also, the pilot ends with factory knuckle coupler suffer from a downward warp!

When body mounting Kadee couplers, it's mandatory that the pilot warpage be first dealt with. 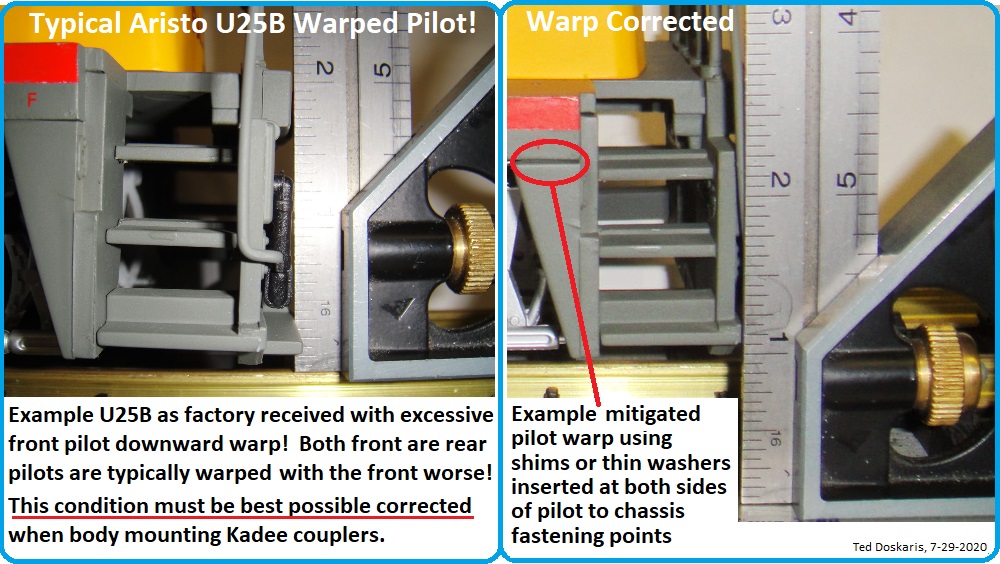 The Aristo's U25B loco employs a clever but odd truck pivot design that resembles Aristo's passenger car trucks - that being the offset pivot - some of which can be seen between the truck and the chassis in the below picture. 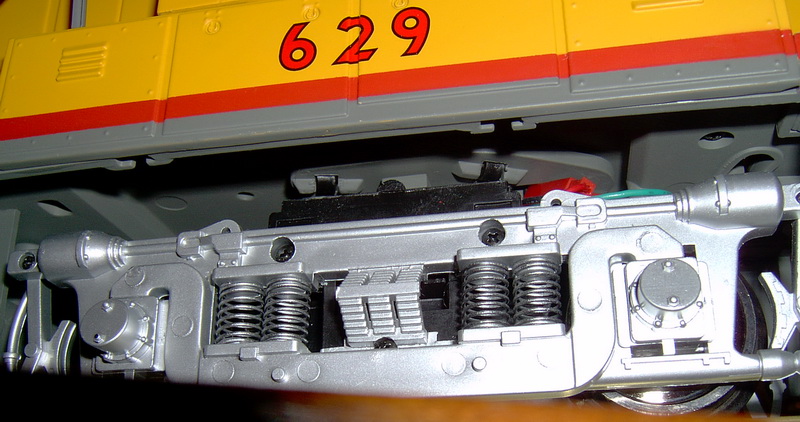 The offset pivot is implemented in the form of an added plastic adapter plate, called an eccentric, inclusive of a 4 rollers. Below is an upside down view.

As can be seen the adapter eccentric includes pivoting rollers to reduce friction.

Comment: In the past, I had wrongly concluded that Aristo late production U25B eccentric rollers were changed from hard plastic to metal. This is because the way the camera flash had washed out the black finish on the rollers making them look metallic, like the roller on the left in the below picture.

When taking apart both early and late production U25Bs, all the rollers were made of black hard plastic.

Illustrated below is a removed truck with its eccentric apparatus still attached. Note the resultant bulk added on the top of the truck's "A" frame. 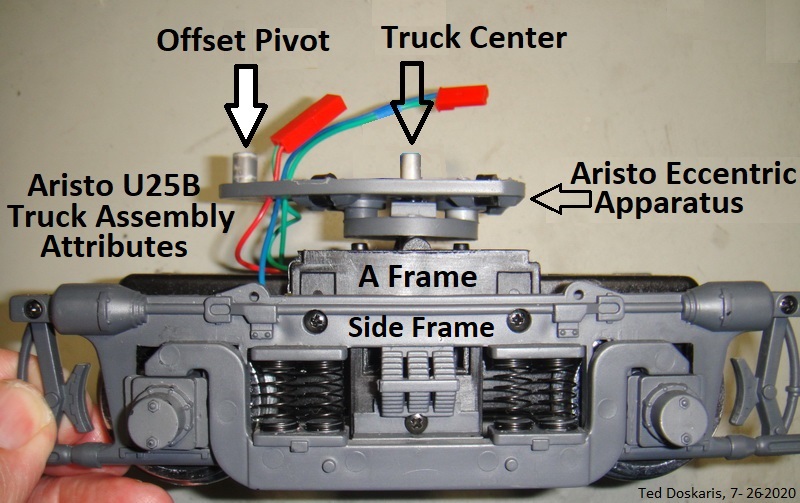 Illustrated below, the recesses in the loco's chassis are deep to accommodate the bulk of the eccentric apparatus, but still not deep enough to lower the loco to the railhead to be of a prototypical height. Moreover, the tall standing loco with looseness introduced by the bulky eccentric, exasperated by wear, results in instability. 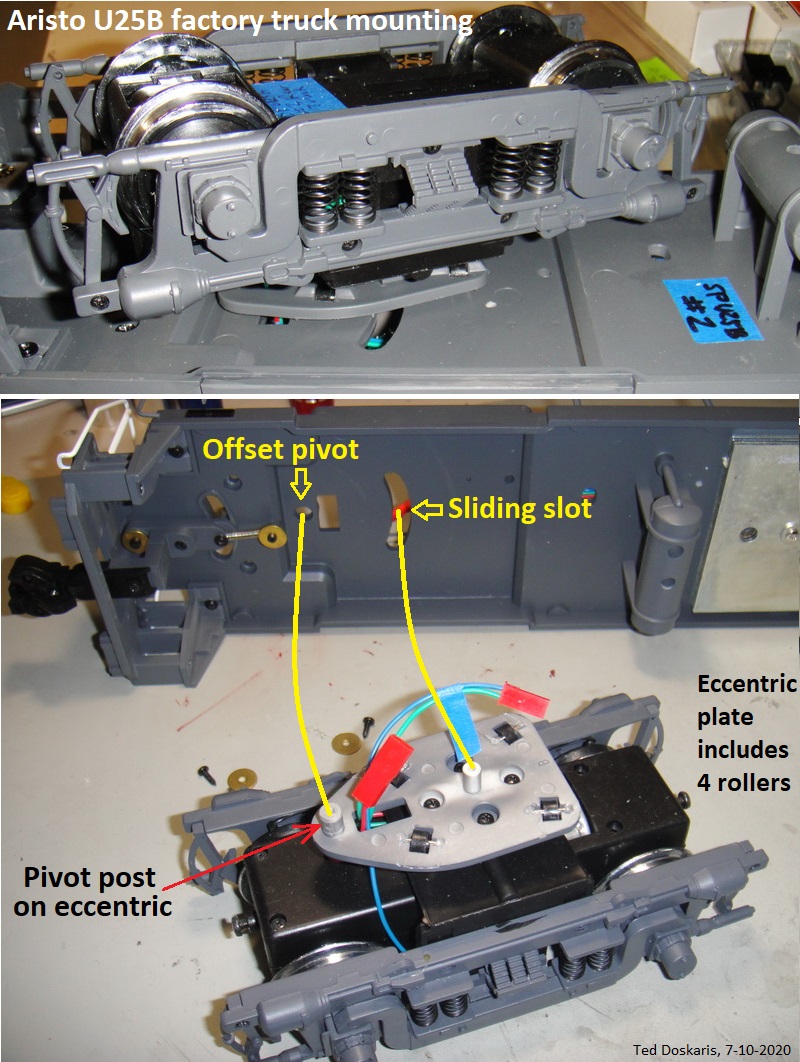 The 4 rollers make contact on flat surfaces within the recesses of the chassis to reduce friction as can be better seen without trucks mounted - illustrated below. 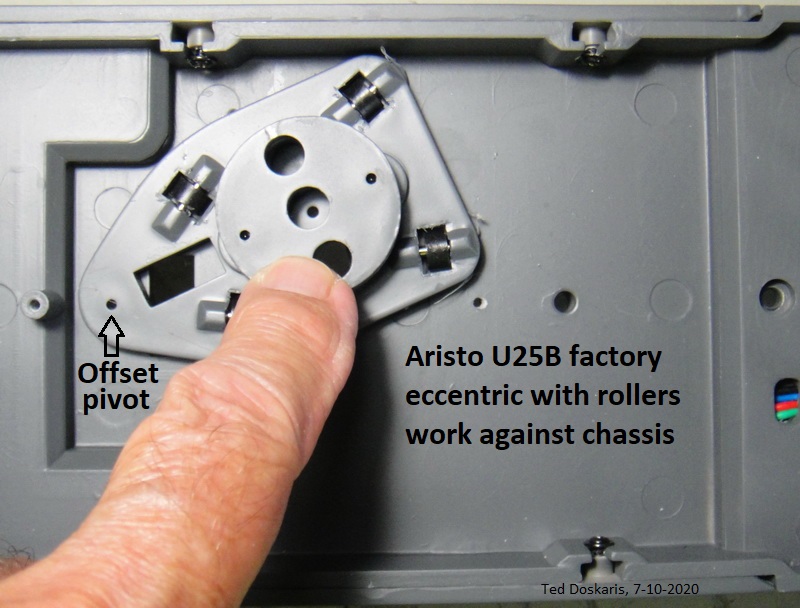 Sometimes the eccentric has an assembly defect that causes one or more of its rollers to become ineffective, which can cause the loco's truck to bind and derail going in and out of curves. This is because there may be too much factory glue on the needle axles that keep the rollers in place. (The glue rubs on the chassis instead of the roller!) The excess glue can be cut off with a razor knife - example shown below. Consideration can be given to lubrication between the rollers and chassis, however, don't use Aristo's Electralube given my experience with cracked plastic journals on other Aristo rolling stock.

This loco was designed with the eccentric for tight curve train operation being it's specified for 5 foot minimum diameter curve track. In this regard, the offset pivot arrangement is beneficial for such tight curve train operation by reducing the amount of front and rear pilot overhang at the ends of the loco, thereby, minimizing how much the couplers projects toward the outside of the curve, albeit with the trade-off of a bit more belly overhang. (The farther out the coupler projects, the more the loco will tend to pull a coupled car off the tracks - worse with typical factory truck mount couplers)

Some folks with this loco have experienced a wobble or leaning to one side that seems more prevalent when rounding curves - maybe being aggravated by those rollers falling out or wearing against the plastic surface. My U25Bs (two Southern Pacific & one Union Pacific) had little use, so I have yet to experience stability problems associated derailments, but my minimum diameter track is mostly 10 foot.

That said, these U25B locos do noticeably lean over on curve track!

Remedies to the insatiability problem to be describe in this vignette include eliminating the factory eccentric, lowering the loco to a realistic height from the railhead, and adding additional low center of gravity weight. 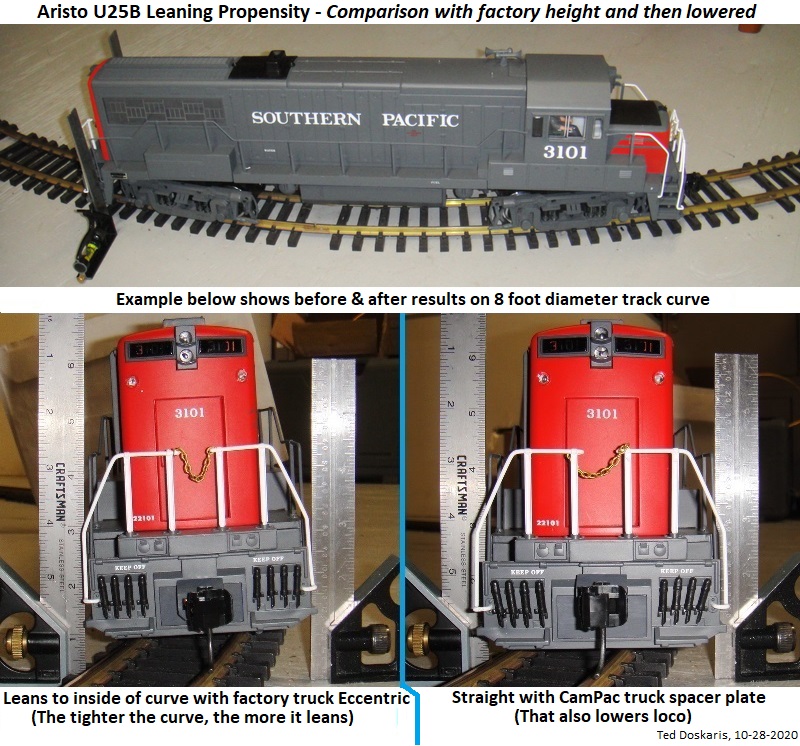 The above & below illustrations show the loco on the left where the factory truck mounting eccentrics had been replaced (compared to the loco on the right) with a thinner solid plate that also serves to lower the loco by 1/4 inch. 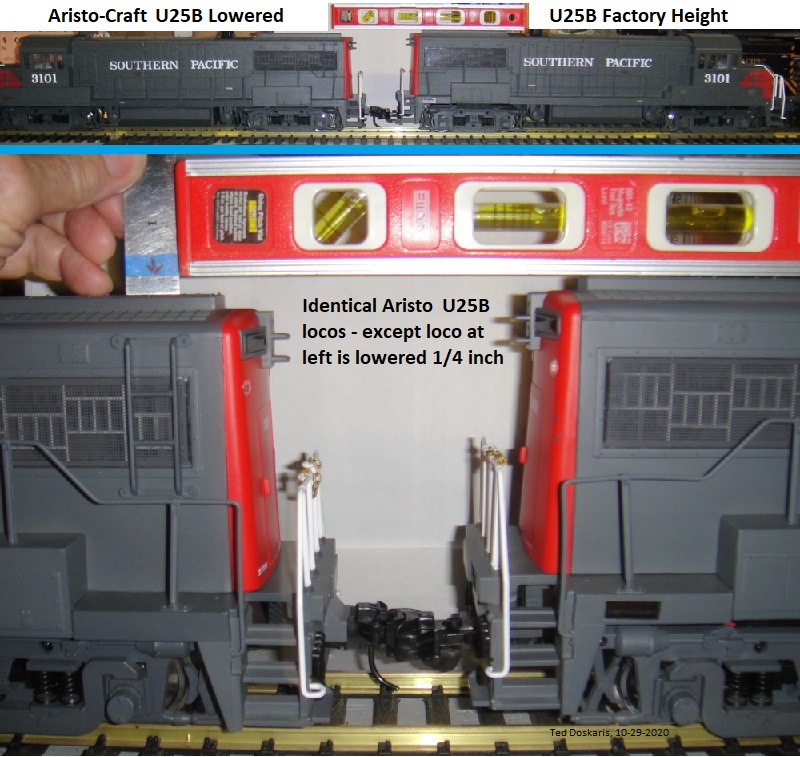 The differences between the eccentric and CamPac lowering plate are illustrated below. 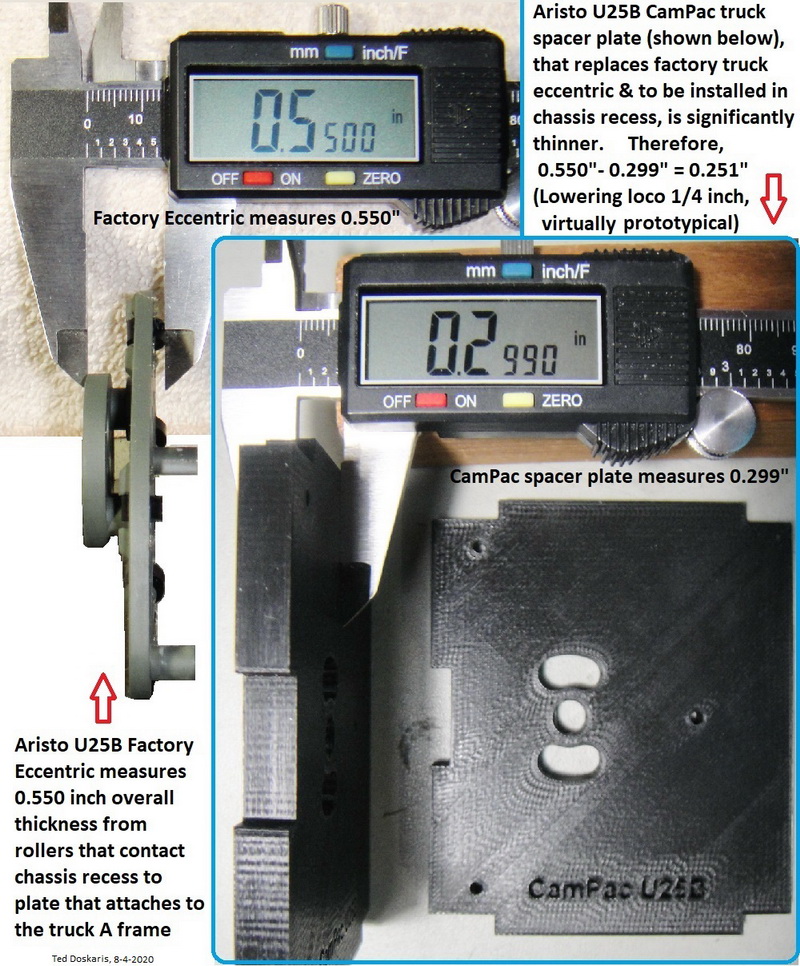 Note: The U25B operating track diameter is 8 foot or greater when replacing the factory eccentric apparatus with the 3-D printed CamPac lowering plates and equipped with CamPac coupler boxes.

Installation of CamPac parts will be described later in section, CamPac Parts & Installation.

In addition to doing away with the factory eccentric, additional weight can be added to the loco to improve its stability. The factory loco weighs about 6 & 1/2 pounds. 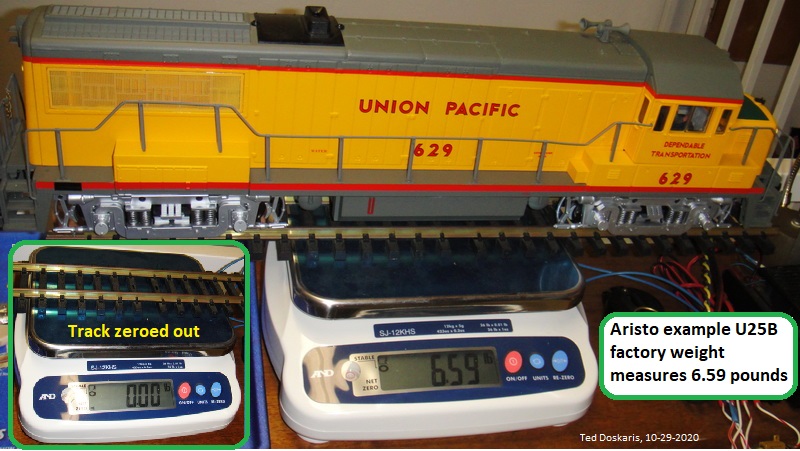 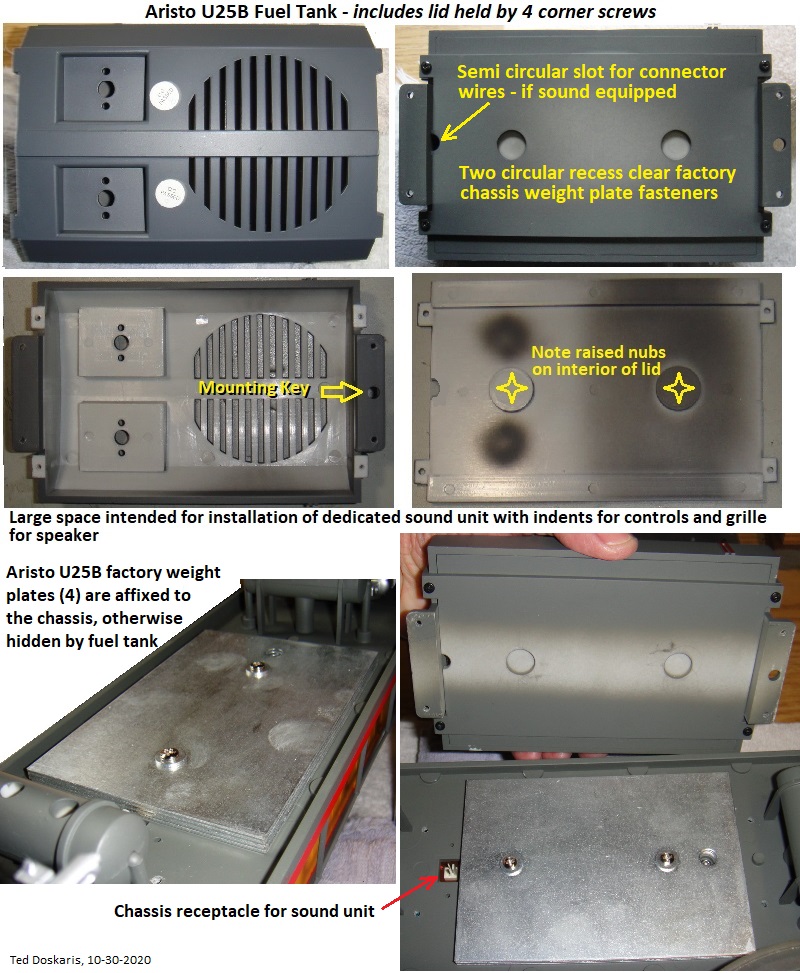 More weight within the fuel tank area can be added to improve the loco's traction that also affords a low center of gravity to help improve stability.

As illustrated below, two Simpson Strong Tie metal pates (readily available from Home Depot) can be conveniently added on the lid within the fuel tank to reasonably increase weight for locos having the old type fully sprung sleeve bearing trucks; however, this can limit the space for fitting a sound unit.

Because the newer production run U25Bs have the ball bearing motor blocks, more weight plates can be added within the fuel tank; however, there will be no room left for a sound unit.

With a full complement of plates in the fuel tank now affording the loco with a low center of gravity, the loco's weight can brought up to 9 & 1/2 pounds. This is comparable to the factory weight of the Aristo GP40.

Note: The below picture shows the Union Pacific U25B that happens to have the factory newer ball bearing type motor blocks. However, this is not relevant to the offset pivot hardware that the U25B has as this is the same for the older style sleeve bearing trucks of my Southern Pacific U25Bs. 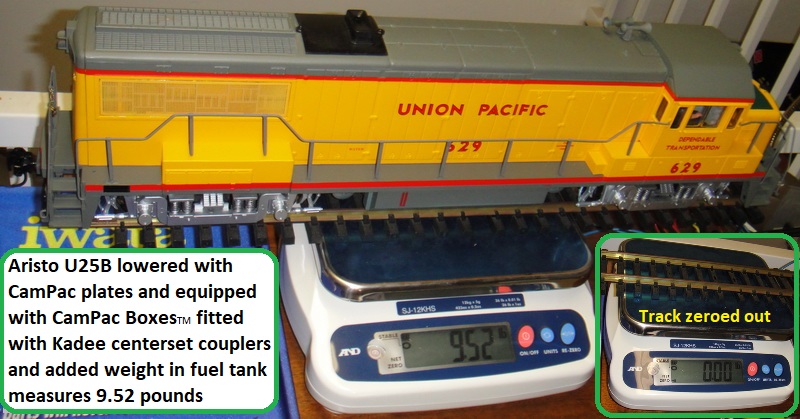 3-D printed CamPac lowering plates and boxes which accept Kadee centerset couplers along with 3-D printed mounting pedestals and plugs to fill in the large pilot openings are available via Colin Camarillo's website. 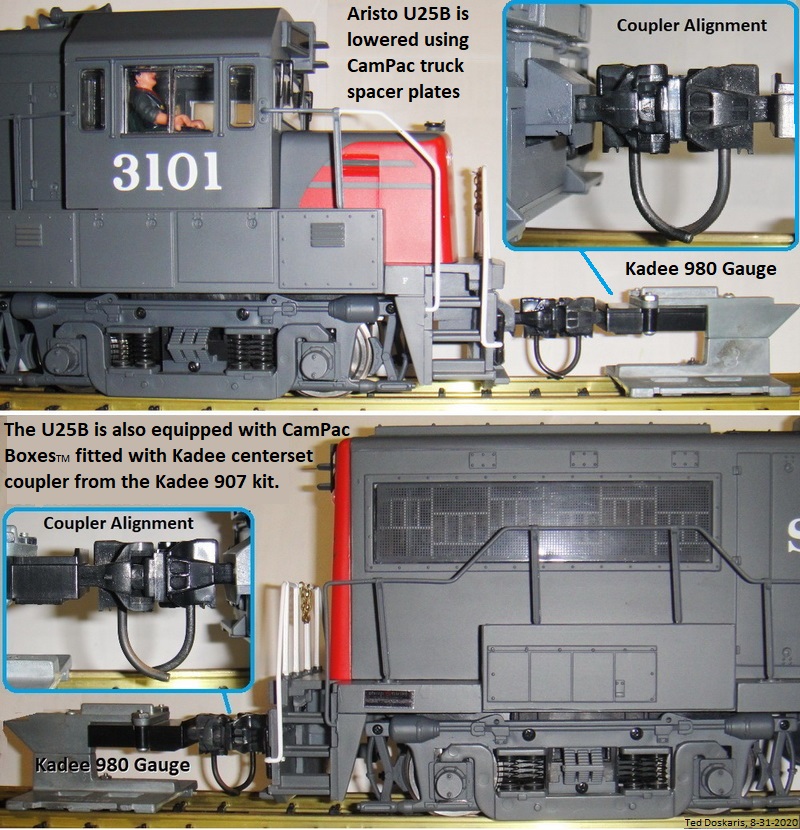 To augment what's described in the Installation Guide, the following information can be helpful to know how things work together: 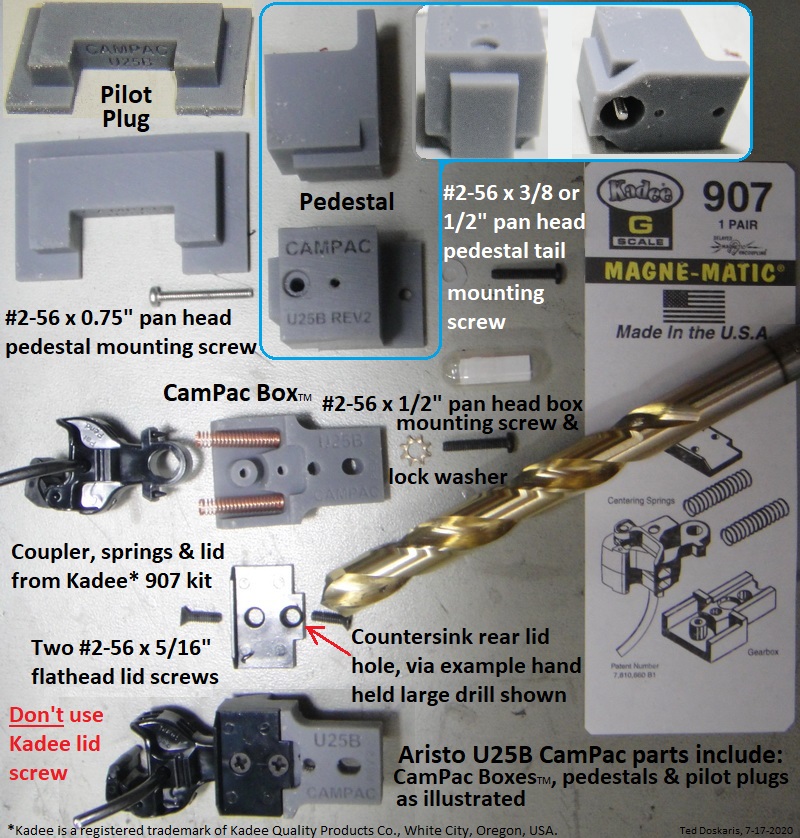 The CamPac parts can be painted to match the loco's livery. The prepainted pilot plug is installed as illustrated below.

The relationship of the plates & trucks is illustrated below.

One truck is illustrated, but both are the same. The lowering plate "kidney" pattern shown below limits truck rotation so interfacing wires are not stressed.

Truck articulation is affected by build tolerances of the loco and requires the use of a thin washer. The example washer used is trimmed to be a 1/2 inch across and fits between the truck "A" frame posts - trimmed as shown below. Illustrated below is the measured height of the as received Aristo factory U25B. 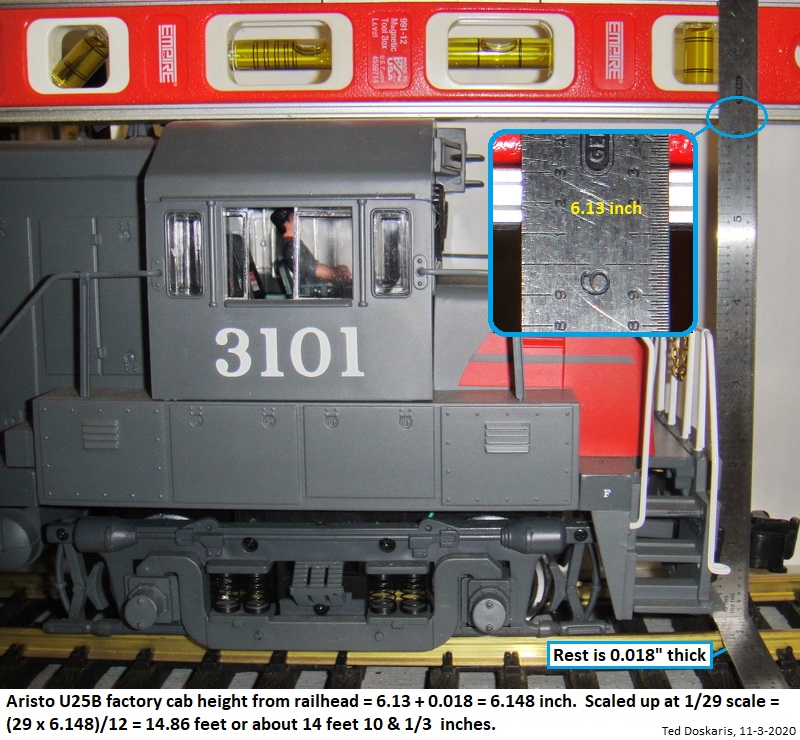 Illustrated below is a comparison of the Southern Pacific Aristo U25B lowered by 1/4 inch and factory height U25B. 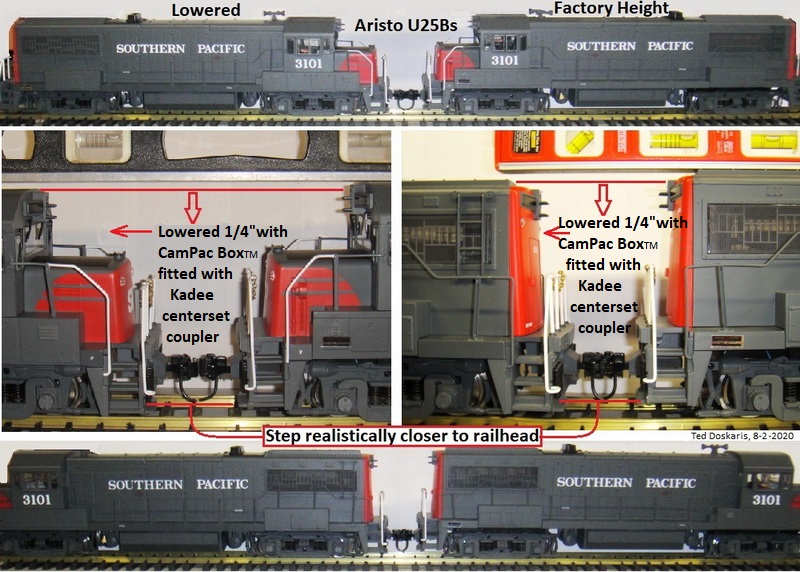 Illustrated below is a USA Trains Southern Pacific GP7/9 coupled to the lowered Southern Pacific U25B.  Both these locos are prototypically comparable as to their height from the railhead, and with the lowered U25B it's about the same height of the GP unit as it should be.

For operational results, see vignette, title: "Triple Heading - Aristo's U25Bs with the SD45 Vignette" that includes a video showing the lowered U25Bs with CamPac boxes in a train.

A plastic prying tool, like the Nylon one shown below, would help to avoid scratching paint when used to separating some items.

Preliminary issues to deal with are described first:

Shown below is a method to keep cab widows from falling before taking off the body shell.

More detail is shown below - helpful if needing to reposition the engineer to the opposite side (swap seats) or in the event windows had fallen out. 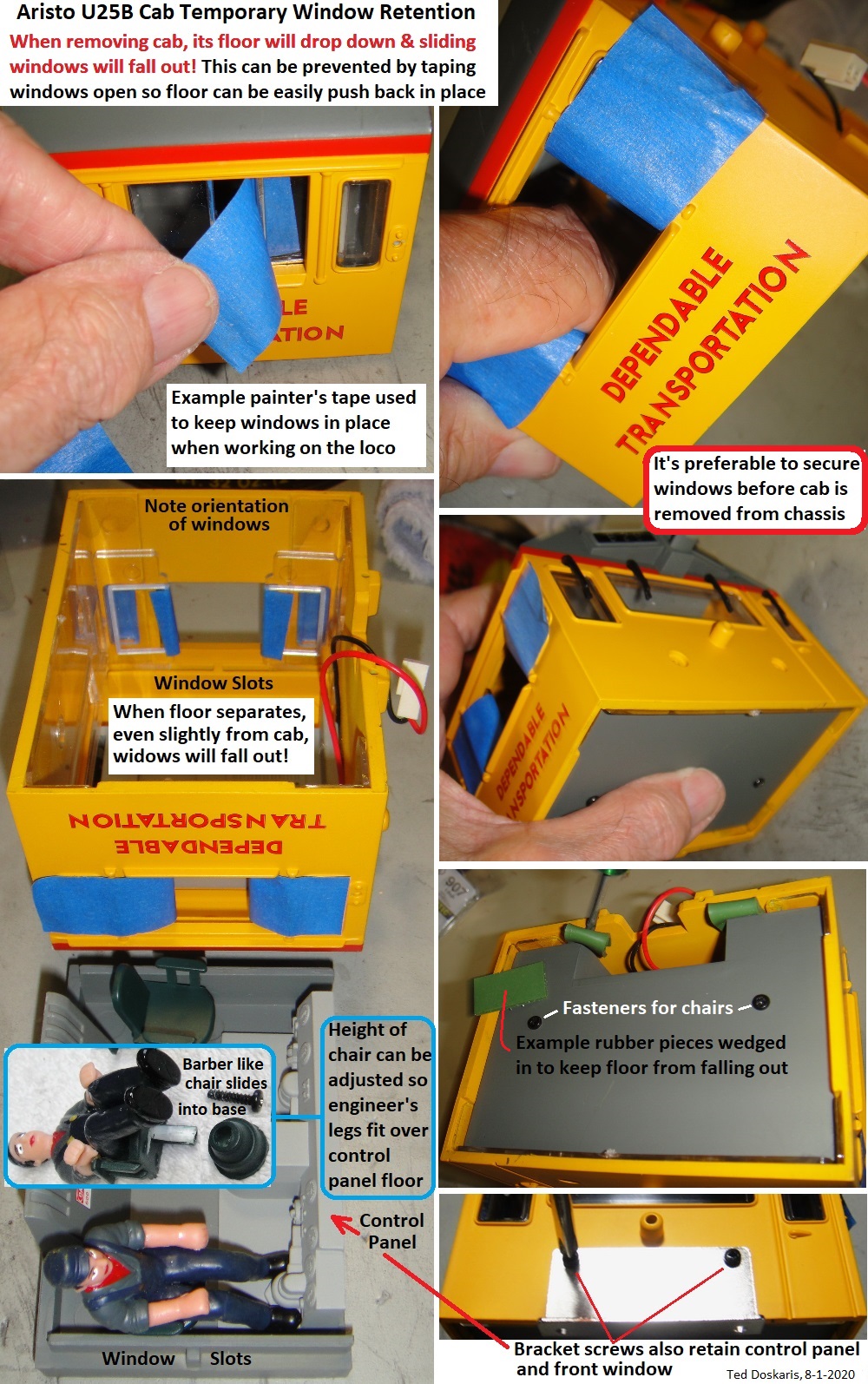 Be advised that the long hood has a small screw on its top hidden under a cover near the cab - illustrated below. 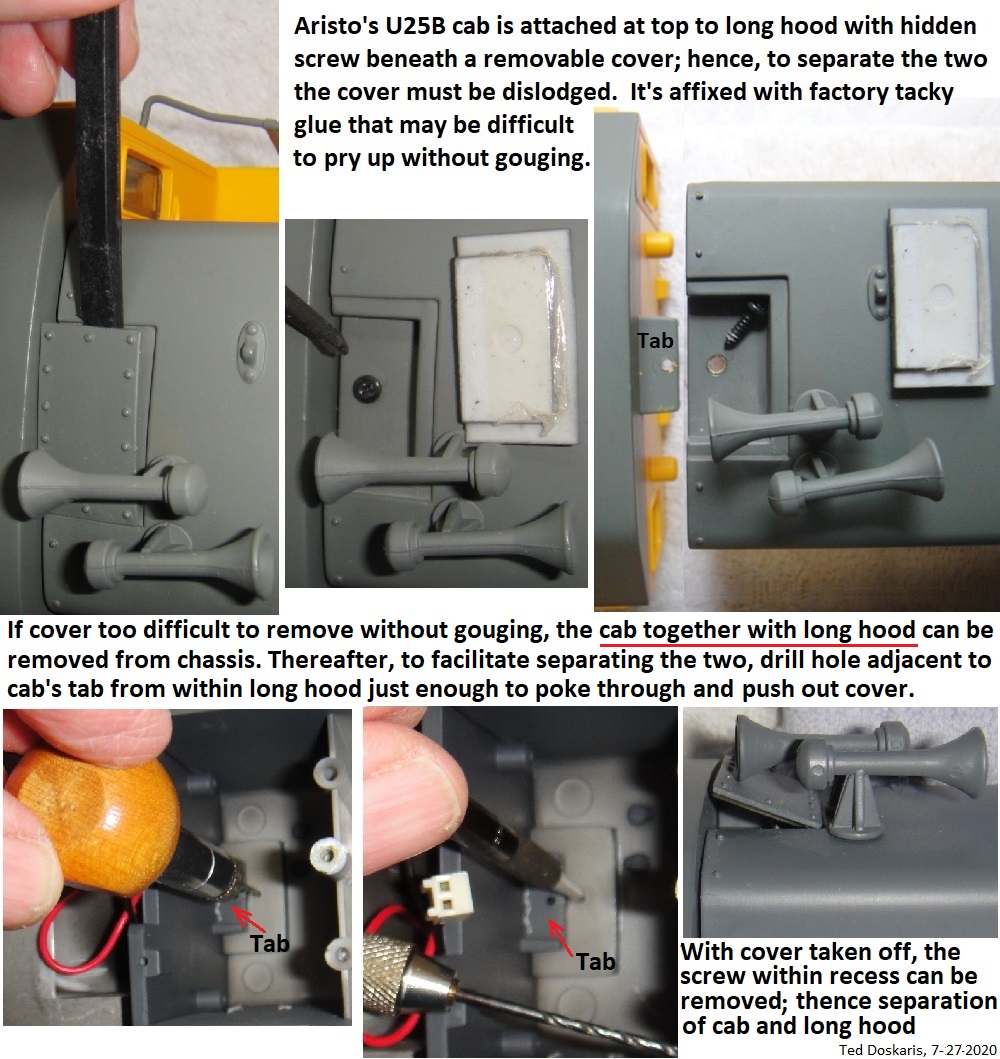 If the factory tacky glue to hold the cover back on becomes ineffective, an alternative example is illustrated below. 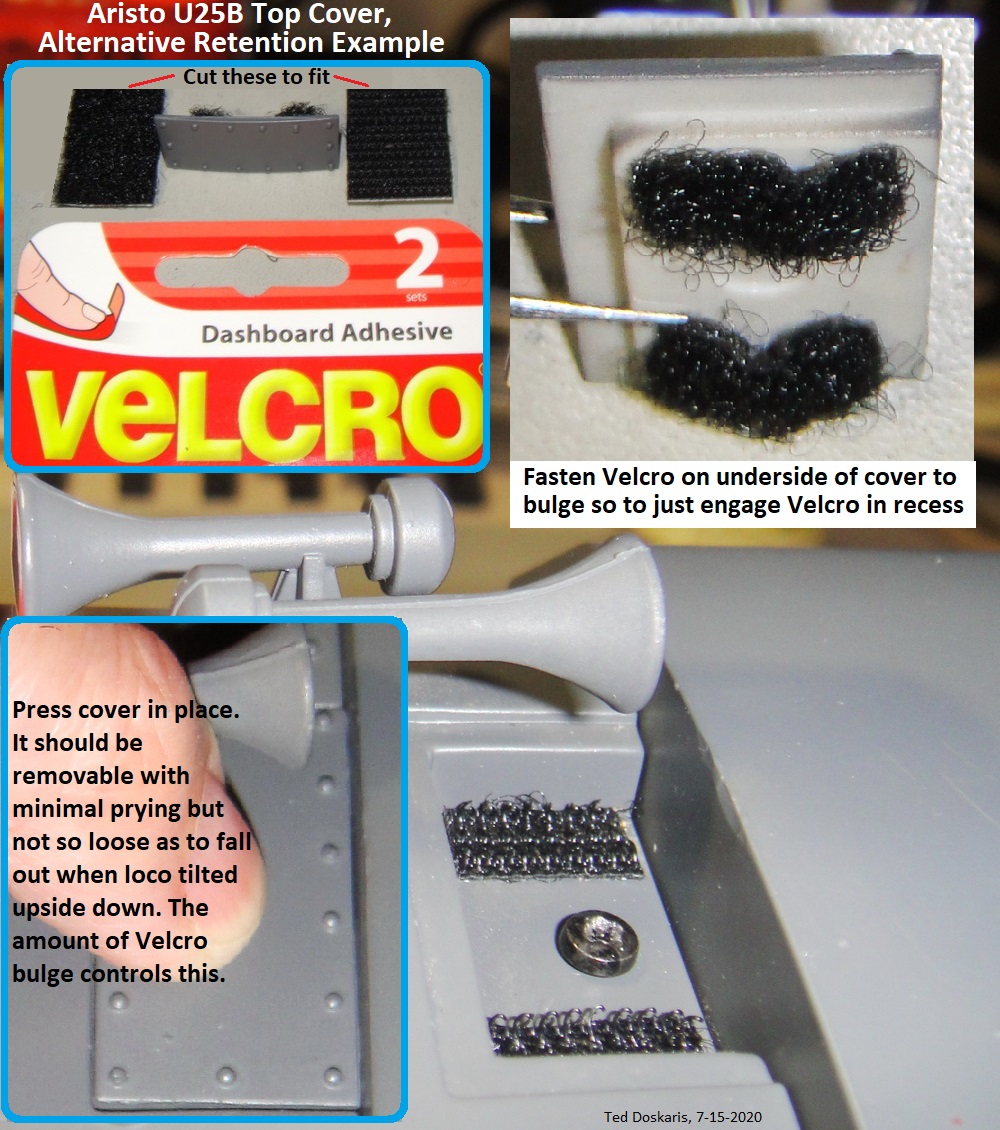 With the prior issues dealt with, the body shell can now be separated from the chassis.

First, the factory screws used to fasten the body shell are described below.

Note: When installing CamPac coupler boxes, there will be an additional #2-56 screw used for fastening the CamPac pedestal located at the end of the long hood. 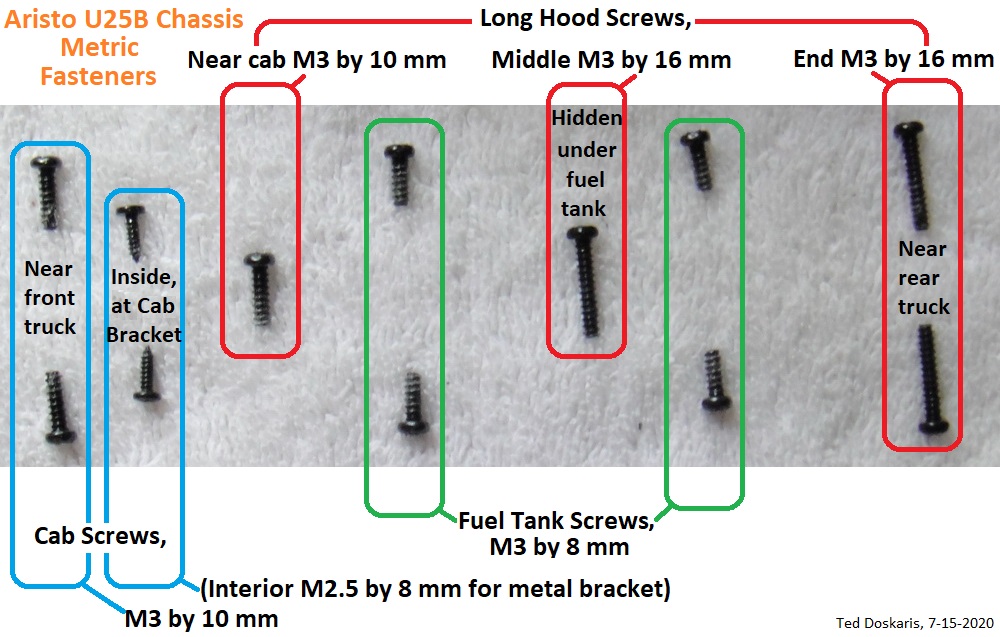 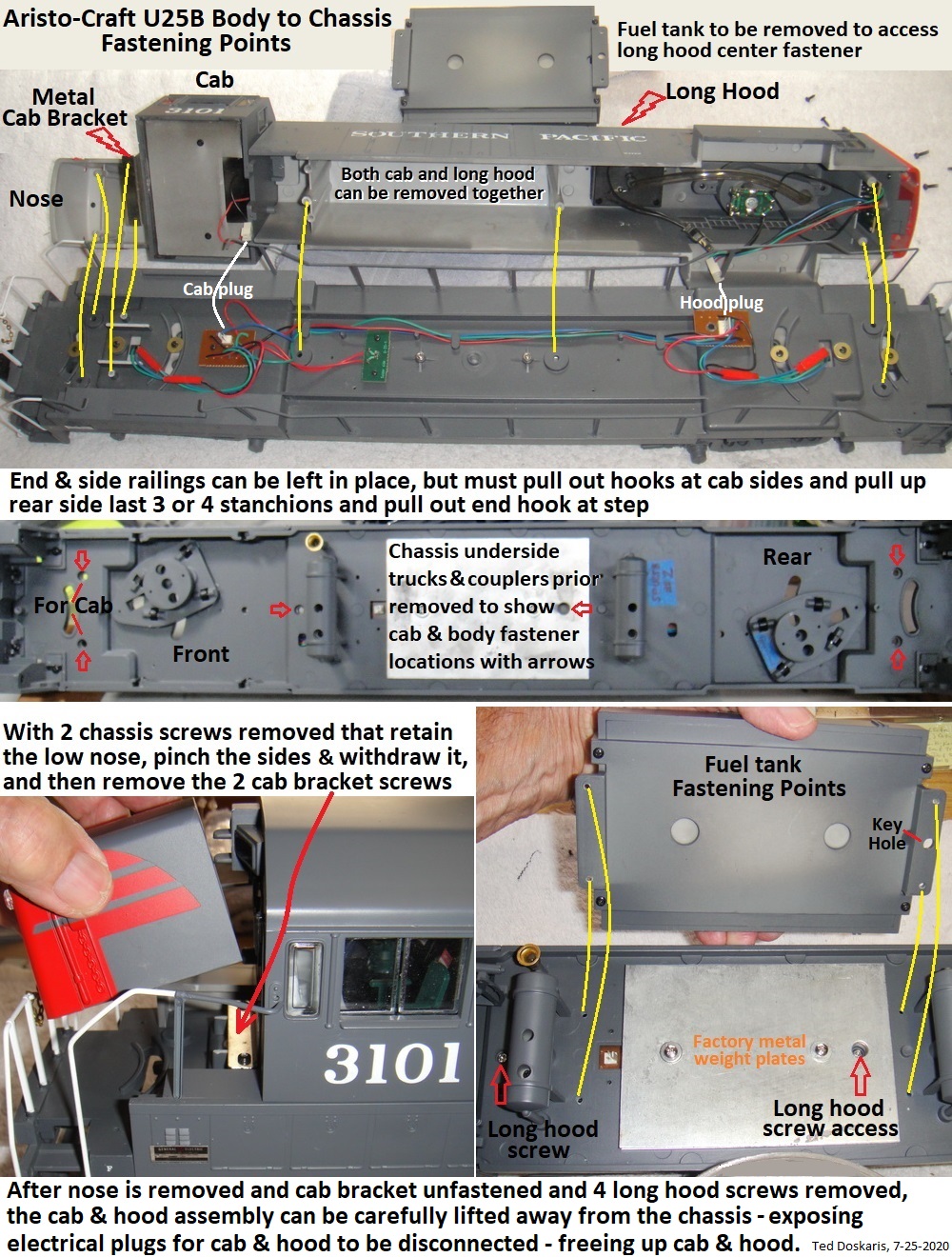 Note that the nose needs to be pinched when removing or install it so it won't get stuck and scrape between the side boxes.

Removing trucks with factory eccentrics from the chassis is illustrated below. 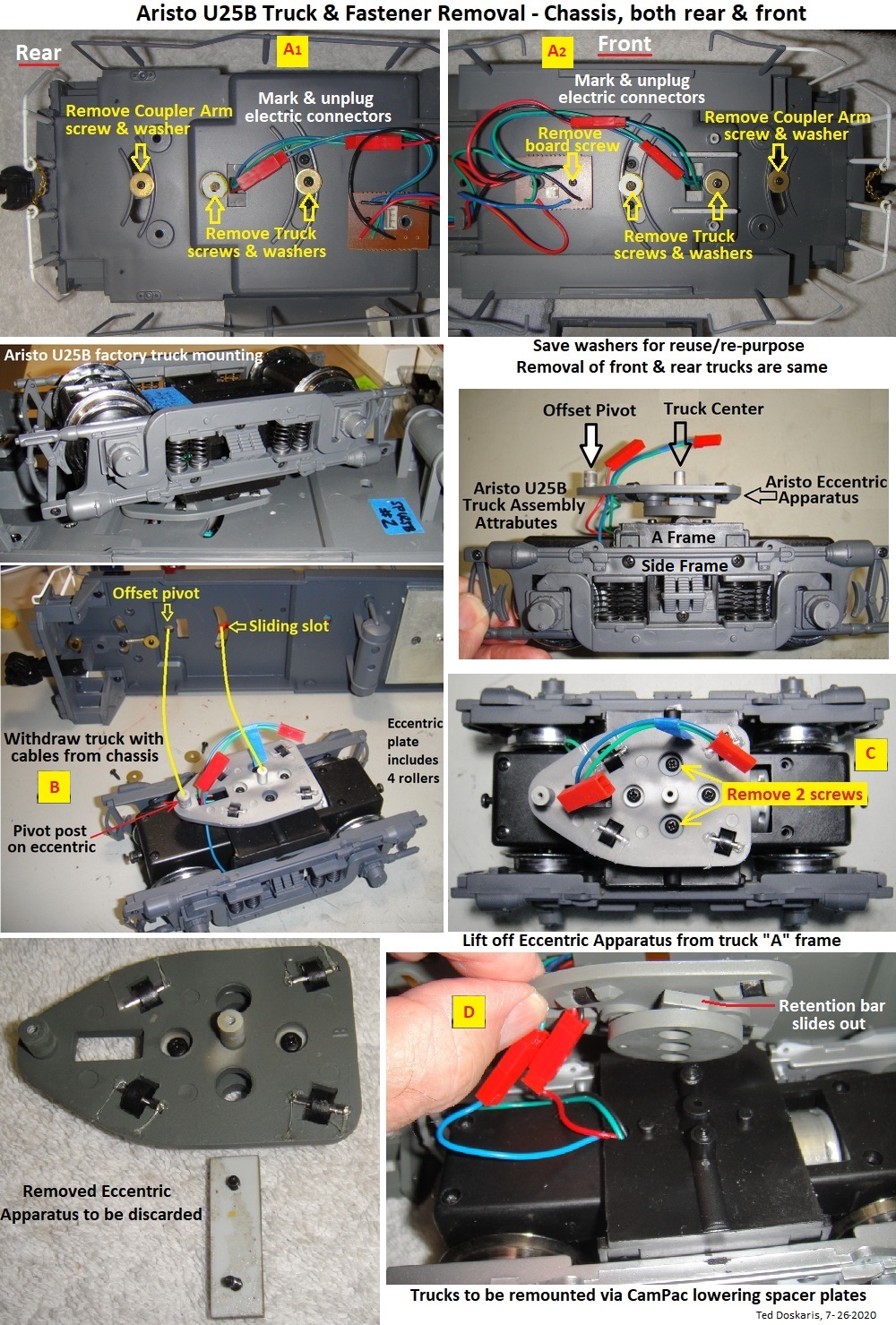 Removing factory couplers from the chassis is illustrated below. 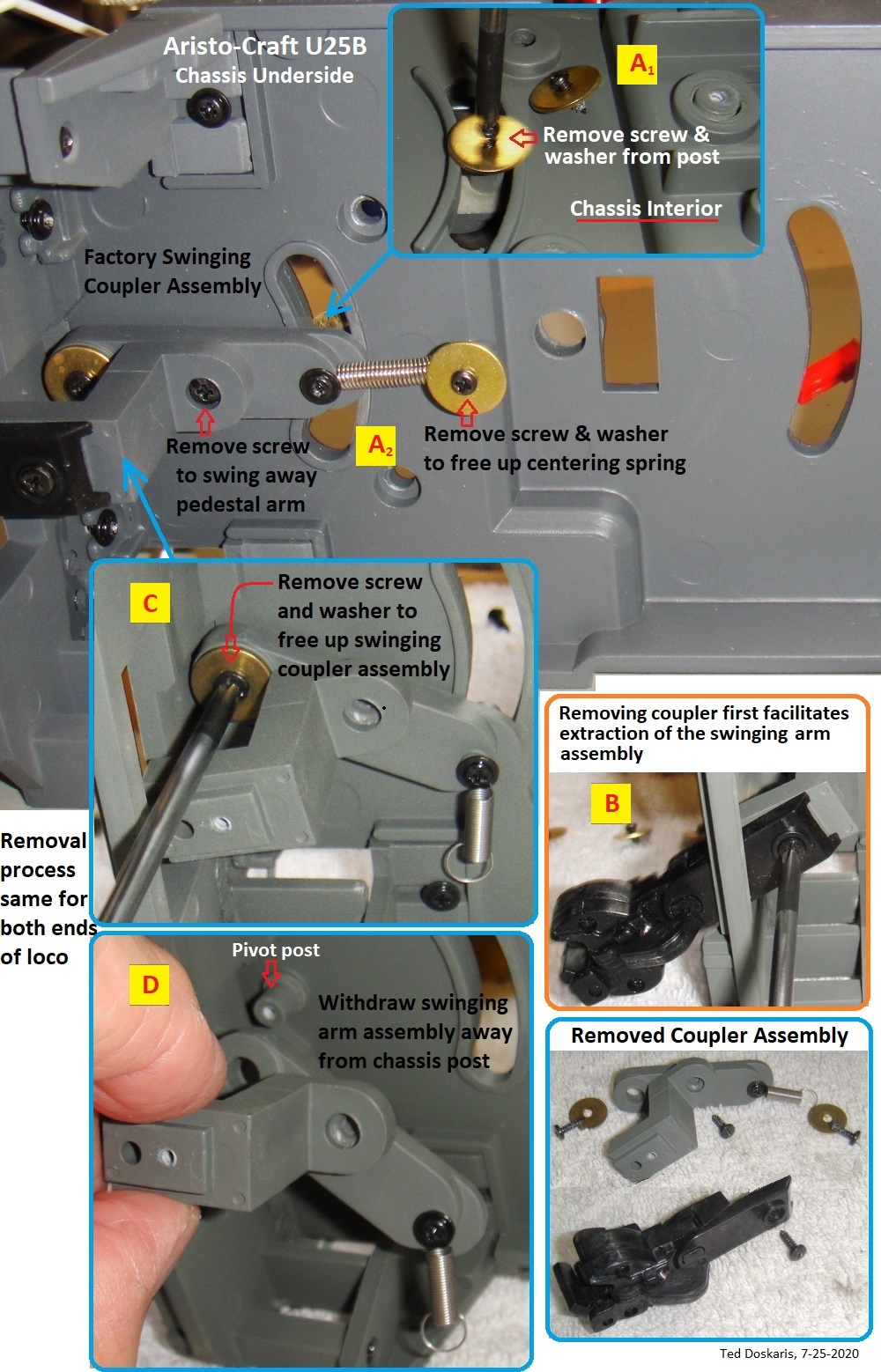 Replacing some factory screws on the long hood with longer ones is illustrated below. This is desirable to do when adding extra weight to the loco. The additional thread depth will better support more weight when lifting up the loco by the long hood.

The switch board is located at the end of the long hood. Servicing switches used for smoke, lights and motor is illustrated below.

Reinstallation of the body shell is illustrated below with attention to wire routing.

The two Southern Pacific U25Bs had the older sleeve bearing type motor blocks. Because about 3 pound of extra weight had been added to them, motor blocks with ball bearings were chosen as replacements to carry the extra weight. Changing from the older spring loaded motor blocks to the newer rigid mounted ball bearing blocks had no noticeable affect on the height of the loco from the railhead. 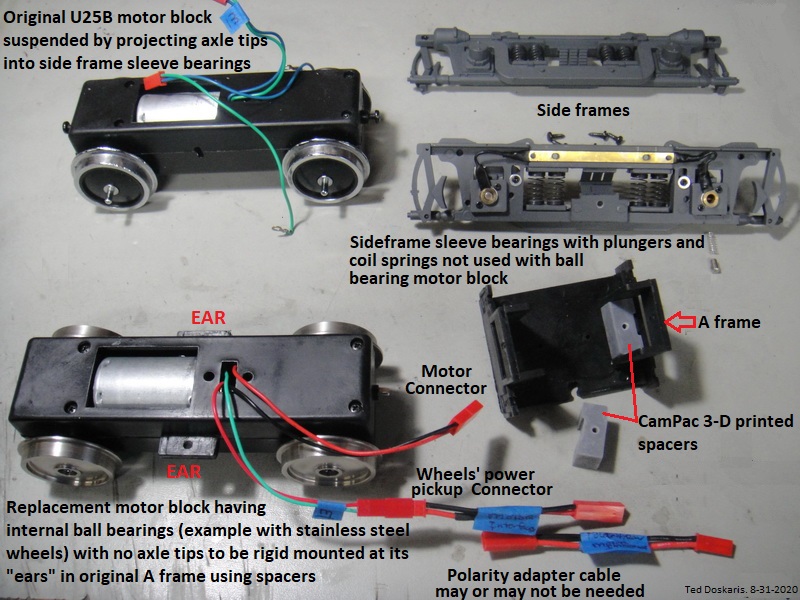 Because there have been different U25B generations & factory production run locos as well as different replacement motor blocks, both the loco and motor blocks can have different & incompatible electrical interfacing connectors; consequently, adapter cables may be needed. An example custom made interface cable to reverse motor polarity is illustrated below.

It's to be appreciated that the Aristo GE U25B motor blocks are common to ALCO FA1/FB1, ALCO RS-3, Budd Rail Diesel Cars (RDCn), and EggLiner. (The Aristo GP40 has a shorter wheel base 2 axle ball bearing motor block of different design.)