This page is under construction, it is in no way complete.

Made by Ring Engineering, by Tim Ring. Been around since at least 2011 dates of youtube videos. (FCC approvals in 2009), but only hearing about it now in large scale, perhaps it was because of not having high current decoders.

Wireless range is stated as 100 feet, more you need a repeater.

The frequency band is 2.4 GHz, but no info on what the physical layer is other than not Bluetooth and not Wi-Fi, technologies which the inventor spares no time denigrating. ;-) The frequency range is 2405.0 - 2480.0, FCC part 15 low power. Some of the comments about Bluetooth range are pretty funny since it has a greater range in the high power versions.

I joined the unofficial RailPro user group/forum:  https://rpug.pdc.ca/index.php It should be noted that the forum owner is a RailPro dealer

Well, unfortunately like all R/C systems with with lots of functions, the first stuff you read is 1/2 features and 1/2 denigrating the competition.

You can read the "nationalism" in the forum posts, and some of the mis-information by the users and company. One user just posted that he has been changing over from his "inferior" DCC decoders to RailPro, and then point out some serious issues with RailPro when doing consists. Hah!

Trying to ignore all of this junk, first impressions are:

The system is sold on being "easier" and more simple, but beyond the initial setup, it is as complex as any system, and needs the user to become well versed in many computer type details.

Realize this is a mesh network, so apparently all units with radios can act as repeaters. It appears to be Zigbee, but technical details are withheld.

You normally want the handheld throttle, a decoder in a loco. For more than 15 foot range, you probably want to add the "repeater / power supply"

the basic decoder and receiver are in a single unit, and you can run it by itself, or in one unit

G scale is all about voltage and current.

Not telling you what current it will handle continuously, and how small the unit is and how there's no airflow to the output transistors, I suspect this unit may run 3 amps or so continuously.

"You can be burnt by the locomotive module heatsink if you touch it while it is powered on. You should not touch the module until the power has been removed for at least 30 minutes to allow it to cool to a temperature that would be safe to handle."

Wow... there are no exterior fins I can see, so I'm guessing this will be a problem for larger, higher current locos.

Note that there is a retailer that sells a mount with a heat sink and fan:

If you read the RailPro forum, you see that for large scale, this is really a must if you use USAT locos or other high current locos.

Another thing not documented in the manual. There is a wire labelled as "input" and the manual shows it being switched to +5 volts. It is not labelled as the chuff trigger, but it is.

Interestingly, it is switched to positive as opposed to the typical chuff switch that is switched to ground. You may have to invert your signal with a transistor, like the famous goof that Bachmann did on the first K-27s.

Be sure your throttle and the decoder are on the latest firmware. On steam files only (doh) you can find a couple of settings "Use input wire for chuff sync enabled/disabled" and input wire chuff on close and a graphic of a square wave. This setting allows you to chuff on the leading edge, trailing edge or both edges of the trigger signal.

no longer produced, had a very limited max voltage, inappropriate for most G scale 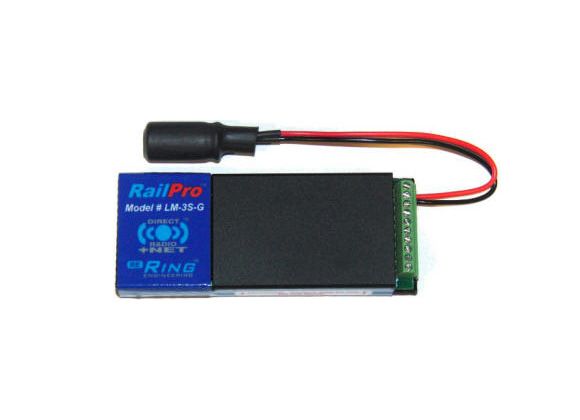 LM-3S is HO model with sound

LM-3 is HO without sound

again from various sources, stall current is 2 amps, so someone guesses the continuous current is under an amp.

Includes throttle, and power supply and power adapter. Since this was designed for HO initially, the power supply and adapter are really a fixed DC supply to the rails and a radio repeater. It's voltage and amps are basically too low for most G scale applications.

looks like firmware and sound uploads. There are things people are not used to, uploading something does not necessarily wipe out what was there before, so sometimes people need to manage the files in the decoder. Good and bad. In my opinion, great, but many users may not have the "computer programmer" consciousness. I think it is a good thing, but will make it more confusing for users.

There are things like not working if people put special characters in file names, total number of files, a lot of "computer programmer" type stuff that the user is not "protected" from:

"RPA can not see more than 82 folders and not more than 52 files in a folder so if your folder count where RPA is looking in is more than 82 every folder after the 82nd (alphabetically) will not be listed in RPA nor available to it. Same with the files."

Will be investigating what this is, no mention yet of BEMF control or PID parameter access.

As already mentioned, sound is not great, but maybe 1/2 of all the people I meet really cannot tell the difference between good and great sound. I would put this in the "good" category for quality of sound, and "poor" for the ability to have the sound "animated".... things like heavy chuff under load, and Doppler shift are non-existant. So the sound system "capability" is about 10 years ago compared to mainstream DCC systems from Zimo, ESU, Marklin, QSI, etc.

There is a designator on some sound files "ULT" which stands for ultimate. Apparently has to do with better recording equipment and all 8 notches of the prime mover. The loop matching is better, smoother notch transitions. I will have to listen to this.

I need to listen to more, I listened to this video: https://vimeo.com/659142710 and there is way too much reverb in the sound file... reverb is used to make sound "bigger" but it is not appropriate when a loco is not inside a shower or enclosed space.

As an aside, I see it is by my old "friend" from LSC who got angry when I told him his model aircraft controller was silly... hmm, guess he finally agreed with me.

throttle needs to be set to zero for brakes to work. Brake squeal is only on ULT files, and only heard very close to stopping. Clearly you must have momentum, otherwise setting throttle to zero will stop the loco before you hit the brakes. (clearly this could be improved to be more DCC like)

Needs more investigation. First off when consisted, the locos communicate with each other to actively speed match. Fantastic idea. Appears to work well, with some limitations, more later. Apparently max number of locos in consist is supposed to be 12, but current reports says system hangs at above 8. Still a good number.

Unfortunately adding and removing locos from consists is nuts, you need to remove all the locos from the consist and rebuild it. Really bad.

There are issues with which loco is the lead, i.e. by running backwards, the lead loco does not change... horn and bell from wrong loco.

When using in DCC mode, they only support universal consisting, and only at 128 speed steps, but in general their whole DCC implementation is not great. Not a big deal, if you buy this stuff to be DCC compatible, you are somewhat foolish.

While the communication between consisted locos is a fantastic idea, it is limited by radio range, and several reports that trying to run locos (even in HO scale) with mid or end train power had issues, seems that the head end locos were not "heard" by the mid train locos. The main transmitter/repeater has either more power or is more sensitive than the radios in the decoders (of course).  You need repeaters, and may need spacing as close as 15 to 20 feet, and there is a max of 4 repeaters. So for large scale, mid train power or end of train power may be impossible or unreliable.

It's a little confusing and the web site could do a better job of explaining, and I work in wireless communications for a living!

So, all devices can transmit and receive, this is the decoders, the throttles, the USB "computer interface" and the thing that is variously called a repeater, a power supply and other things, the PWR-56.

As far as I can figure out, this is a mesh network, but it is unclear what devices can act as repeaters. There are more gotchas, the USB device does not work well as a repeater, power is lower, the PWR-56 has DC output to power the rails, but why? If you buy it to use as a repeater that does not make a lot of sense. The decoders themselves have limited range, as evidenced by the issues with distributed power in consists.

There are places on the site that say you might need a repeater every 15 to 20 feet, but I believe they are thinking inside HO layout.

There are some issues with chuff sync input.... it has been stated that the chuff trigger input is not always used, even when set. I read some gobbedy goop about this is to make smooth speed transitions, more on this as I learn it.

The auto chuff is of course not without problems, many people report it is the wrong speed, or right at one speed and wrong at slow and fast. Also many people report extra chuffs when the loco is stopped. This reported even by fanboys: https://rpug.pdc.ca/index.php/topic,1440.0/topicseen.html

My guess is that the developer will eventually embrace BEMF "tachometer" and emulate what QSI did for auto chuff, i.e. the hardware can actually count the real motor rpm.

Charging the throttle, you must have the charger plugged into AC before charging. Sometimes its better to be sure you see the charging screen