Note: Click on the desired specific locomotive on the left. There are tips and techniques on each one in the menu.

USATrains is owned and operated by Charles Ro Sr. This will help explain when you see the Charles Ro advertisements. Their first loco was the NW-2 "cow" and "calf". They started making cars at a high level of detail, much sooner than Aristo. Their "Ultimate" line is highly detailed and well scaled. This is often the point of distinction between the "camps" of "who is the best".

I mostly will concern myself with their 1:29 line of products. They also have a line of 1:24 products that don't have the same level of detail, and I model 1:29.

They have a pretty extensive line of diesels, and while the drive mechanisms of their diesels do not have ball bearings, a much touted feature of Aristo, yet, overall reliability in the drive trains, i.e. motors and gears and bearings is about the same.

The diesels have a few, but consistent weaknesses:

The newer products have fan-driven smoke units. You can see the fan motor in a cast zinc housing, and they have a little power board either nearby, or on the chassis. These units work well and rarely burn out.

The older smoke units are smaller, square, and flat and will definitely burn out if left on with no fluid. They do not have fans.They are not great smokers.

Interestingly, they both mount in the same "bracket", so you can swap the newer ones for old, for example in the F3s. The new units do need a small regulator board.

The type and method of lighting varies from loco to loco, and also several locos have different versions. Many of the diesels have classification lights that change color from green to red according to direction.

The bottom line when converting a USAT loco to DCC or something similar and you want to retain the original lights is to put the loco on rollers, power with DC, and then measure the voltage to the connectors and see if it is fixed or variable, reverses polarity or not, and what the max voltage is.

Don't follow this advice and I will guarantee you will burn out lights during an install.

The drive mechanism is basically a motor with worms on each end, driving an axle assembly which is a plastic gear casting, with 2 metal half axles (that have the wheels)  pressed into it. Some models have an extra reduction drive gear. The axles ride in brass bushings in the motor block which ride up and down in the motor block. On some blocks, there is a wire that presses down on the axles between the bushing and the gear to pick up power. The ends of the axles ride in bearings in the side frames, which also have power pickup wires.

All units have "splitting" of the gear where the metal half shaft enters it (on either side). The fix is a new gear, or better yet a new axle set. As far as I can tell, the way to tell is the old axles have "splines" along the length of the axle shaft. The newer axles have a helical knurling. The new ones still split the plastic housing, but not as often.

There are some ways to repair them, see the section on "Split Axles" on the left. Many people just buy new axles.

Also, VERY IMPORTANT:  The assembly/alignment of the "brass" bushings on the axles is different between 2 axle trucks and 3 axle trucks. Failure to observe this and re-assemble properly leads to stripped gears. Many of the negative comments you may hear is from someone who actually screwed up their own locomotive, and then blame it on USAT. You are forewarned.

Details in each specific loco page, but the short answer is 2 axle locos have the flat side up, 3 axles have the point up (aligned like a diamond). The bushings on any "idler gear" shafts fit "flat".

USAT locos have very few electrical problems. The electrical pickup is normally from metal bearings at the ends of each axle and LGB style "skates" or "sliders" that bear on the rails. On some locos there are additional wires "whiskers" that bear against the axles for even more pickup (inside the motor block). The only problem I have ever seen is when an extended short circuit has overheated the slider springs or the pickup "brushes" on the axles. This can overheat them and they will lose their temper. Overall a superior and redundant pickup system.

The wiring can vary, and if you will remember only one piece of advice: NEVER assume what voltage the lights are inside the loco, check the voltage with a meter BEFORE any alterations.

The 3 axle USAT diesels have a swinging 3rd axle assembly attached to a 2 axle motor block.

Out of the box there can be weird derailments.

See the special page on this below.

With all the different brands, each has screws a little different. Also, for some reason, USAT has different screws in very similar locations.
Swapping in the wrong screws can lead to stripped threads or loose parts. It will pay off to pay close attention.

I cannot tell you how many USAT diesels I have worked on that have stripped body/shell threads, or people who have overtorqued the screws and pulled them right through the shell into the post in the chassis. Once you have done that, that locations is completely unable to share in the task of securing the shell, and there's no good way to fix this. I've worked on locomotives with enough stripped/damaged mountings that you cannot pick the loco up by the shell.

Kadee makes conversion kits, but all of them have a large offset couple and they mount to a swinging arm on a small pedestal. Due to the single screw that allows the coupler box to swivel and the offset coupler, under stress the couplers bend down, and the coupling levers drop below the rail head. This is the #1 issue with Kadees, and then people wind up cutting off the magnetic uncoupling lever or bend it way up. Either way negates the great feature of remote uncoupling. This flex also helps enhance the issue of coupler override, which leads to uncoupled trains.

I strongly recommend finding a way to make a more solid mount for the coupler and using a center-set coupler that will not "torque" down or up under stress. Below is a good way to proceed. I use these coupler boxes myself. 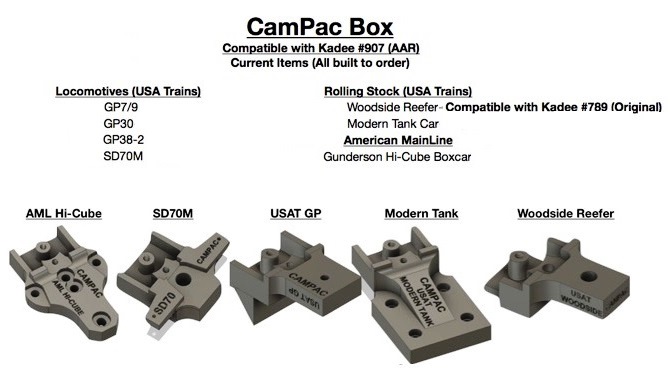 Please note: the dimensions given on wheels are from the manufacturer, and not all are exact.

Shawn Conahey, a.k.a EMD Trainman, started a Yahoo group that had the best information on USAT loco and rolling stock part numbers. Then he moved out to his own bulletin board. It's now gone, http://www.usatgscalegroup.com/phpbb/index.php, but now the information is in the notes with nice pictures on his Facebook page: http://www.usatgscalegroup.com/phpbb/index.php

Here's some text from Shawn giving an overview:

When USA Trains first came out as Charles Ro trains originally in the 80's, there was just one series of trains. After the name changed to USA Trains, there was more product expanding to what it is today. There is now 3 different series of USA Trains and I will explain all 3 here and what the difference is.

#1 The USA American series: This is a 1:24 scale ratio series product line up which was the original product line up made by Charles Ro back in the 80's. This series is not exatly the most realistic one USA Trains makes, but you don't have to worry about buying 20ft diameter curves to run any of this series on. On this series the detail parts such as grab irons and steps come in a kit bag and you install them. This series also comes with plastic wheels to further reduce costs

Here is a list of American Series rolling stock that was made.

#2 The Ultimate Series: "As Real AS It Gets" was USA Trains motto whe they introduced this new exciting series of more modern type rolling stock which is all 1:29 scale ratio. This is the most realistic series of rolling stock that USA Trains offers. I'm not saying they have the correct amount of rivets or brakes or exact measurements for their scale, so please no 100 responses about this is not correct or thatt is not correct for this road name. I'm just saying the Ultimate Series is USA Trains most realistic line up, as well as very detailed line up. There are alot of fragile detail parts on this series also. Here is a list of Ultimate Series rolling stock that USA Traiins makes. This series of rolling stock already has the detail parts already installed. This series also comes standarrd with a nice upgrade set of metal wheels.

#3) The Prestiage Series: This is USA Trains newest series and is also a 1:29 scale ratio. What makes this series different is that it's made mainly from diecast metal and has alot of metal detail parts making this series the Cadillac of USA Trains. This wonderful series only has locomotives in it and includes sound.

Special Note: Be sure to ask the bidder on ebay to distinguish which USA Trains box car they have. I have seen many people on ebay get the America Series simulated steel box car confused with the Ultimate Sries 40ft box carr. Remember all American Series rolling stock you have to attach all detail parts such as grab irons and steps and the Ultimate series already has it installed.