Originally made by Aristo, from 2 streamliner ends and the standard 2 axle motor block. Later revived by Bachmann, but the body is a single casting now.

Opening it is easy, 4 screws on the bottom. Simple electrics. (above) there is a crappy slide switch that turns lights or motor on and off, I took it out of the circuit, it started to rust just sitting around, and if you know anything about Aristo, they used the cheapest slide switches possible.

Noting the lighting: There are 6 incandescent bulbs in the eggliner, 2 headlights, and 4 side "markers", mine were all wired in parallel, always on, no matter what direction. 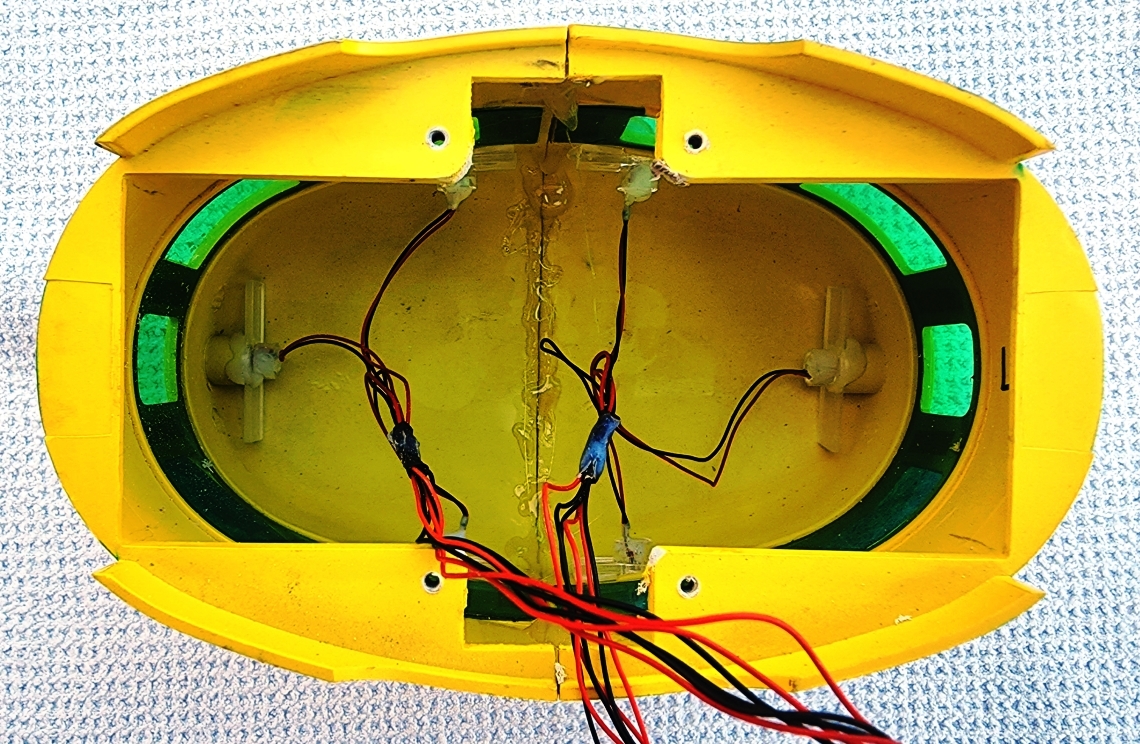 This is a "cute" loco, popular with kids. I wanted to power and control the headlights and running lights. Of course I wanted sound.

When they first came out, I got a TCS WowSound 501 decoder for evaluation from Reindeer Pass. It was fraught with bugs, so after a number of years, the newer firmware came out with many bugs fixed. So, years later, I sent my original one in, and credit to TCS, received an updated TCS WOWSound V4 model 501 diesel decoder, and decided to fit it to the loco. The detailed review of this decoder is under the TCS manufacturer in the DCC section.

Click here for my page on the WoWSound decoder

To start, there is hot glue everywhere, and it is used to hold the 2 halves together, a continuous "seam" of hot glue up one side, across the top, and down the other.

Unfortunately, the assembly people also decided to embed the light wires into this mass of glue, and worse, all the lights were paralleled, so a giant mass of wires all mixed and twisted together in the glue. Conversely, with the long leads, it facilitated the ability to independently power the 2 headlights and the "running" lights. The lamps are all incandescent.

The picture above shows the wires CAREFULLY pulled out from the hot glue, they are thin, and pull GENTLY. Needle nose pliers can be used to grip small "chunks" to clear the way.

There is still hot glue holding the 2 halves together, so with needle nose, I could pull the last of it out and pull it apart carefully, and then reglue the halves again.

I cut the wires apart where they are all soldered together, and "found" the headlight wires. These are powered from the decoder. I used a 3 pin JST connector, making a common between the lights. Using connectors allow me to set the shell aside if it needs maintenance.

The rest of the lights are run from the F1 output from the decoder, so a 2 pin JST was used. (note there is no chance to plug the connectors in wrong).

Luckily, these lights are 50 ma at 12 volts, and bright enough at that voltage. Strangely, the TCS decoder has a 12v regulated output, so no dropping resistors or other junk. (very strange for a decoder to have a 12v common, 5v makes much more sense with today's LED lights) Again lucky for me, more simplification in the installation.

I put a nice sized speaker in an aerosol paint cap, and used some "rope caulk" to seal it on the edges for more bass.

Double stick tape is used, not the greatest, but it works. 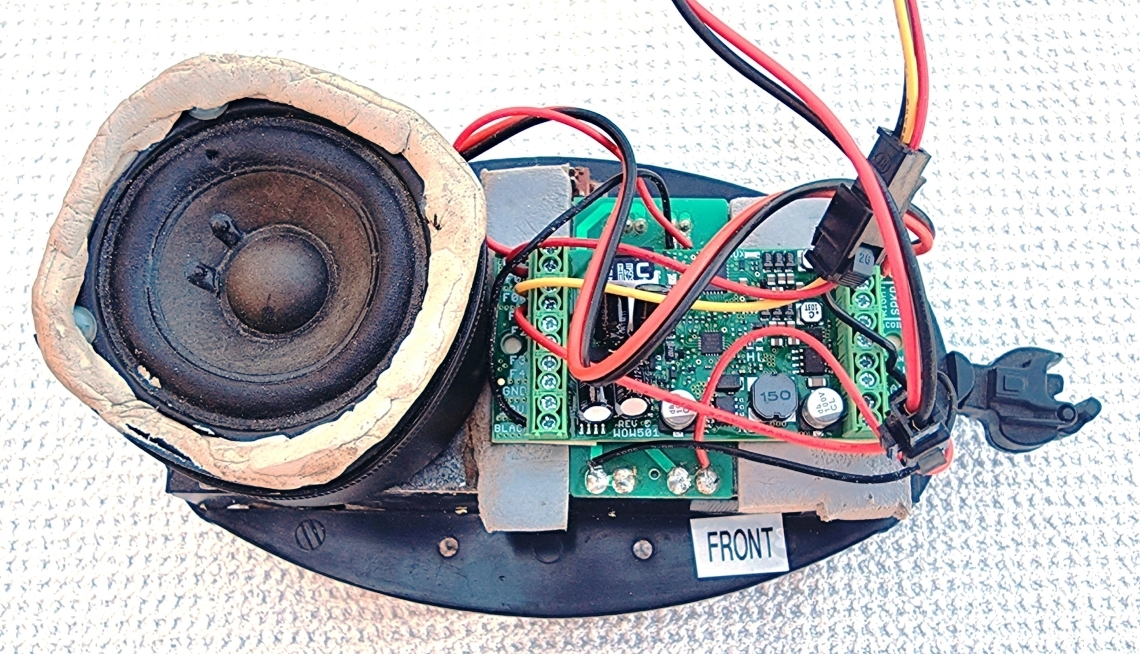 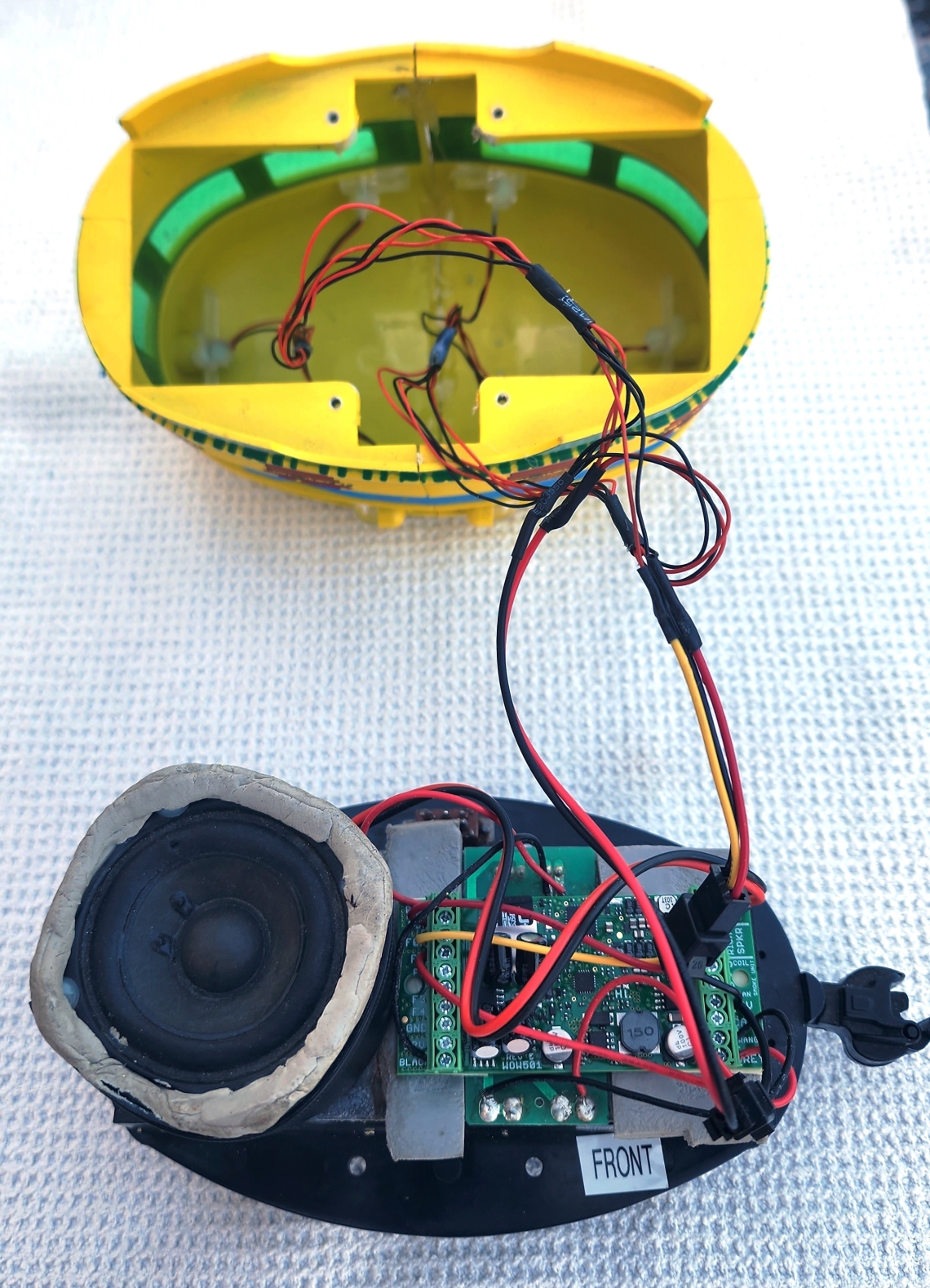 I had to round the corners of the shell a bit to clear the speaker getting into the "center hole", but it all fits.

Small complimentary cars are made in an egg shape, pretty cool.