Kadee centerset coupler assemblies are body mounted with one screw that, also, serves to adjust for leveling the car frame end with respect to the tank.  This eliminates the need for shimming the coupler boxes so that couplers will align with the Kadee coupler to track height gauge when done in concert with straightening the frame at its center and slightly lowering the car by altering the truck height.

Shown below are example Aristo-Craft 10,000 gallon tank cars (1 & 3 dome) fitted with body mounted Kadee 907 centerset couplers. These cars have their Kadee draft gear boxes integrated into the end sill pockets without cutting the car to do so. 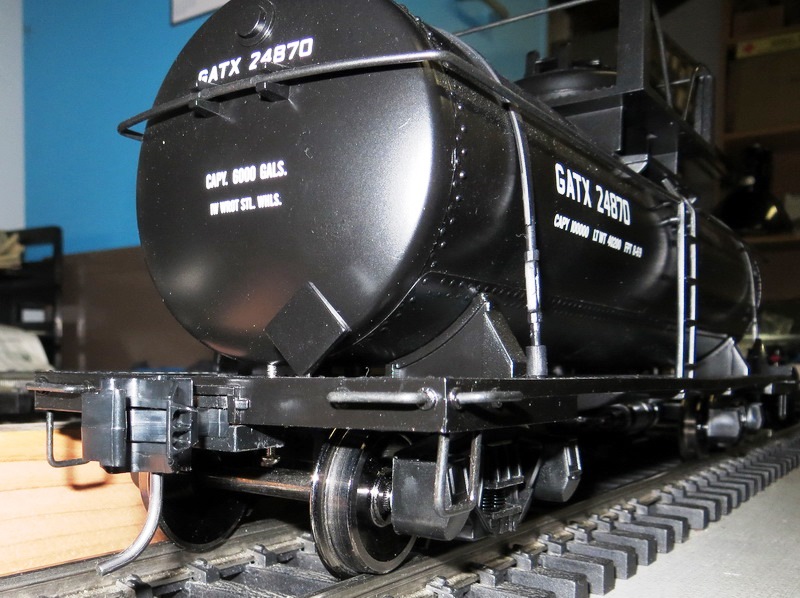 Rather than cutting the car's end sill wider to accept the Kadee coupler box, the coupler box (with lid) is notched to mate with the car's pocket. 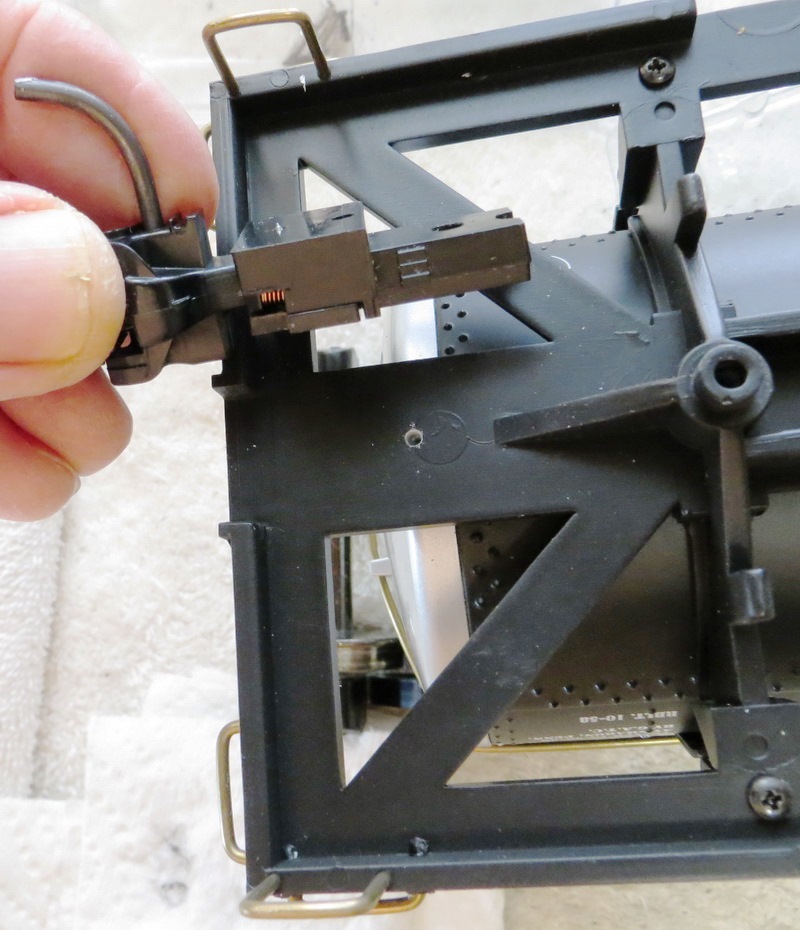 The early production run Aristo tank car version does not have the exterior coupler draft gear detail protruding from the end sills like the newer versions!  Kadee Coupler box modifications (that need not be done for the older version) accommodate the use of this detail.

Shown below are end sills for both versions of the tank car with Kadee centerset couplers mounted.
Kadee 907 New Generation "E" or traditional Kadee 789 assemblies can be used on either version car. Physically mounting the coupler assemblies is the same for both version cars; however, for what is differently done on the older version car, see Appendix A.

The information to follow describes what (and how) is done to integrate body mounted Kadee 907 coupler. assemblies.

In order to best align installed body mounted coupler with the Kadee 980 coupler height gauge, the car first needs to have its frame straight. The Aristo factory does not appear to assemble the tank car with much attention in this regard, perhaps owing to truck mounted couplers with their intrinsic slop.

I have 7 tank cars with many of them having their frames bowed with respect to the tank - most of the frames were bowed downward from the center outward, though one car frame was bowed upward.

The following illustration includes a description and simple fix for straightening the car frame - more particularly, the frame's center spine that affects the attitude of the coupler pad at the end sills (which is why straightening is to be done): Shown below is the example Union Pacific tank car having been corrected. Note the consistent air gap parallel distance between the tank and the frame of the car.

Another thing that affects the coupler pad attitude is if the pad should dip up or down - even after straightening the frame's spine - or if the pad is allowed to flex under load when the car is coupled in a long, heavy train. Remedying this condition will be discussed later.

In order to integrate the Kadee coupler assembly into the car's end sill pocket, the coupler box and lid are notched at two corners as illustrated and described in the following pictures and drawing: 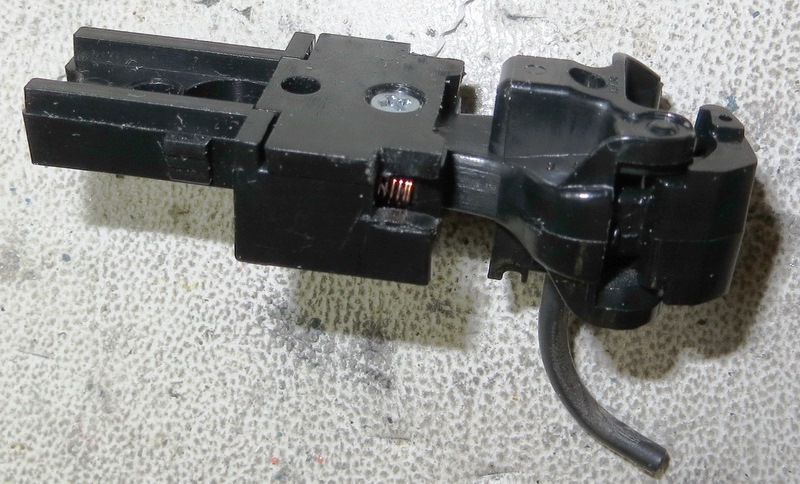 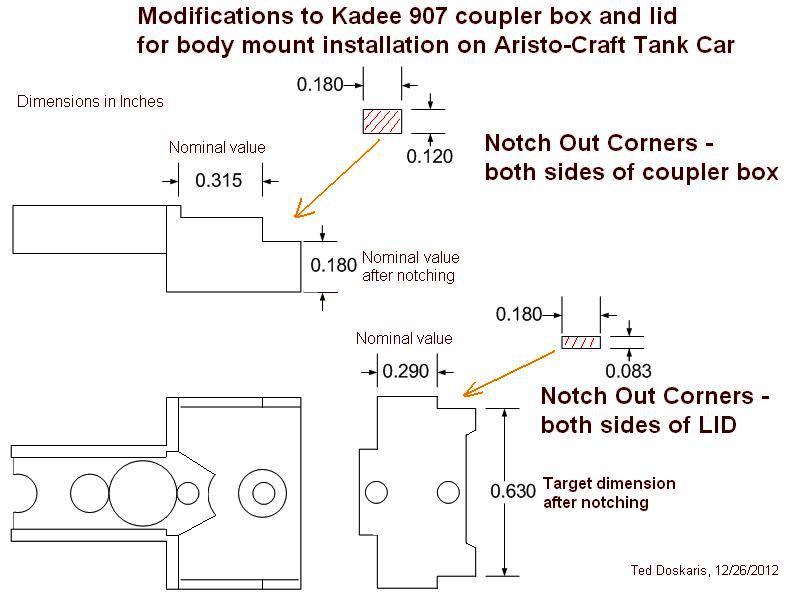 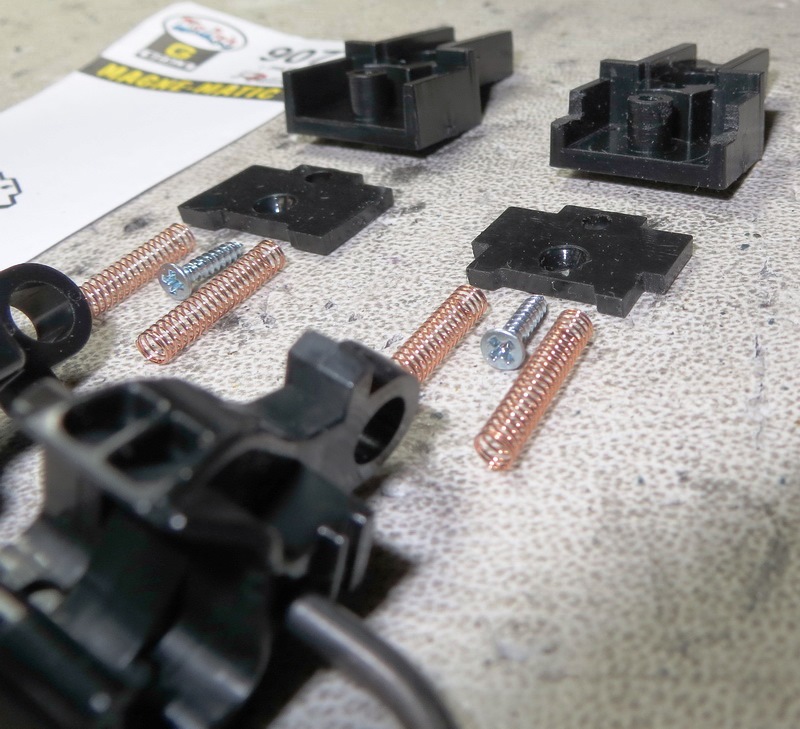 The pictures below illustrate a method for notching the Kadee 907 coupler box and lid. (Note that the coupler box and lid notched areas are first scribed using a razor knife - being located with the use of a machinist scale and dial calipers.) After the coupler box and lid are notched, assemble the coupler, springs and lid.

For mounting the Kadee 907 coupler assembly, a hole must be drilled and tapped for #2-56 screw thread in the car frame coupler pads. The hole is to be centered and located 0.900 inch from the end of the sill as illustrated below. 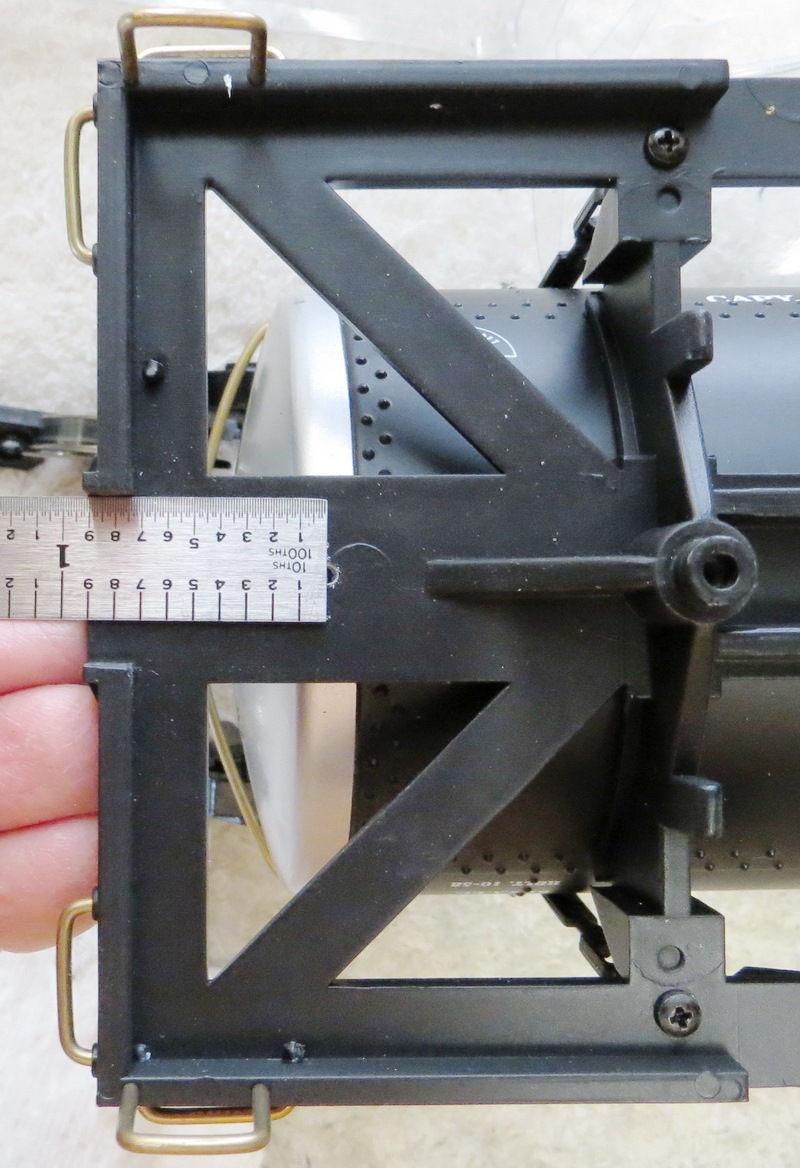 Place the coupler assembly on to the pad and up against the end sill pocket. It will be fastened using a 2-56, 3/4 inch long screw with nut and external tooth lock washer - shown below.

The long screw has two purposes - the obvious is for box installation when the nut is tightened down. 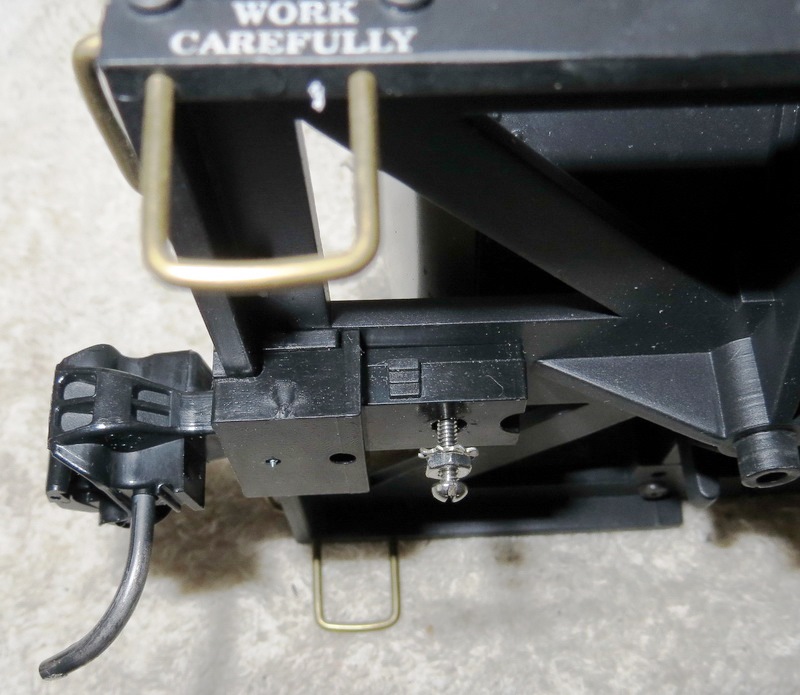 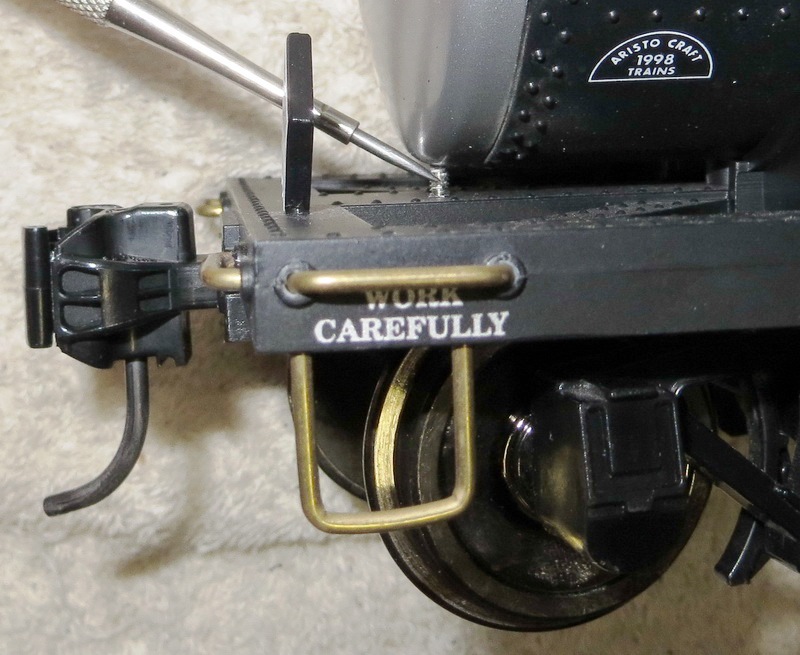 Once the screw is set so the outer frame extremity is correct, tighten the nut (the nut driver will fit over the screw head for tightening the nut)- shown below. 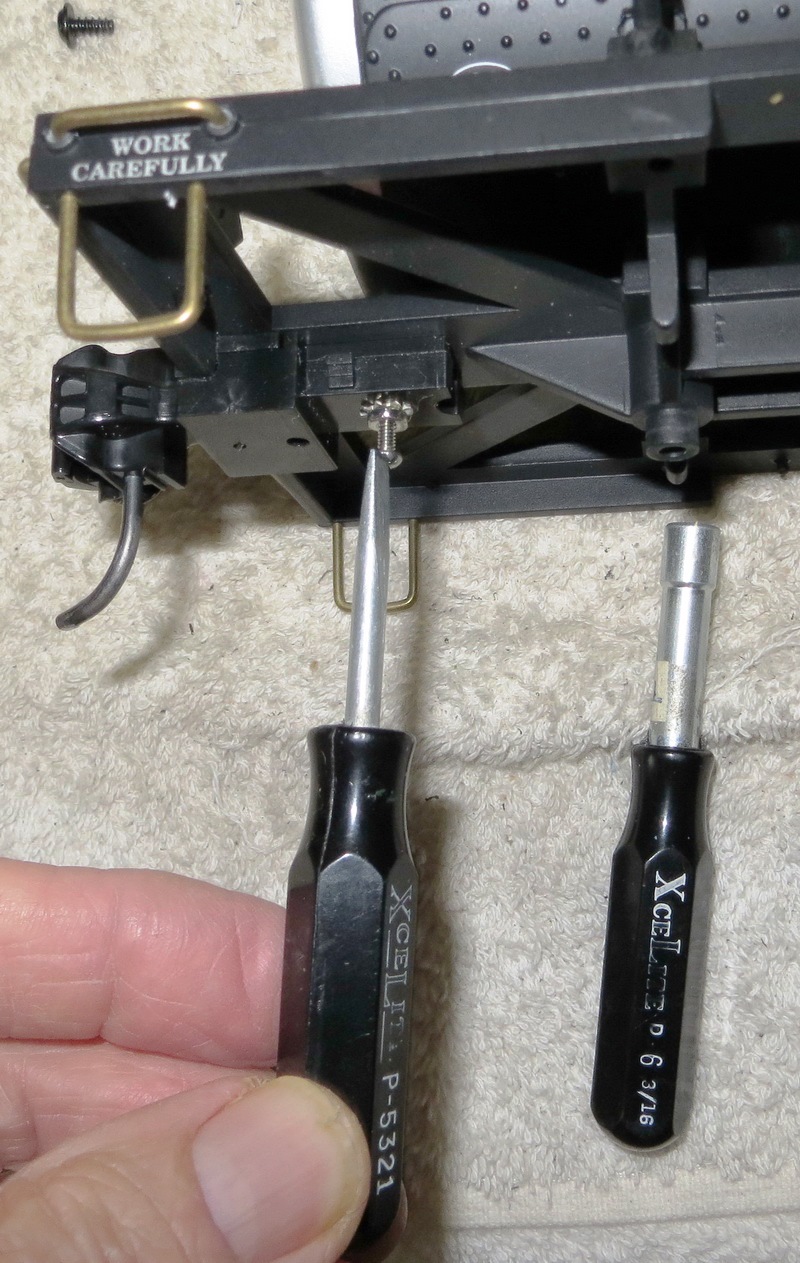 In order for the car with installed Kadee center set couplers to align with the Kadee 980 coupler height gauge, the car must be lowered by a small amount - assuming the trucks are equipped with Aristo ART-29111B metal wheels.

Lowering the car is done by placing a shim (0.032 inch thick) at both ends under the bolster of the Aristo truck where it goes into the side frame. To do so, press down on the bolster span to compress the springs, insert the shim then relax the pressure - shown below: 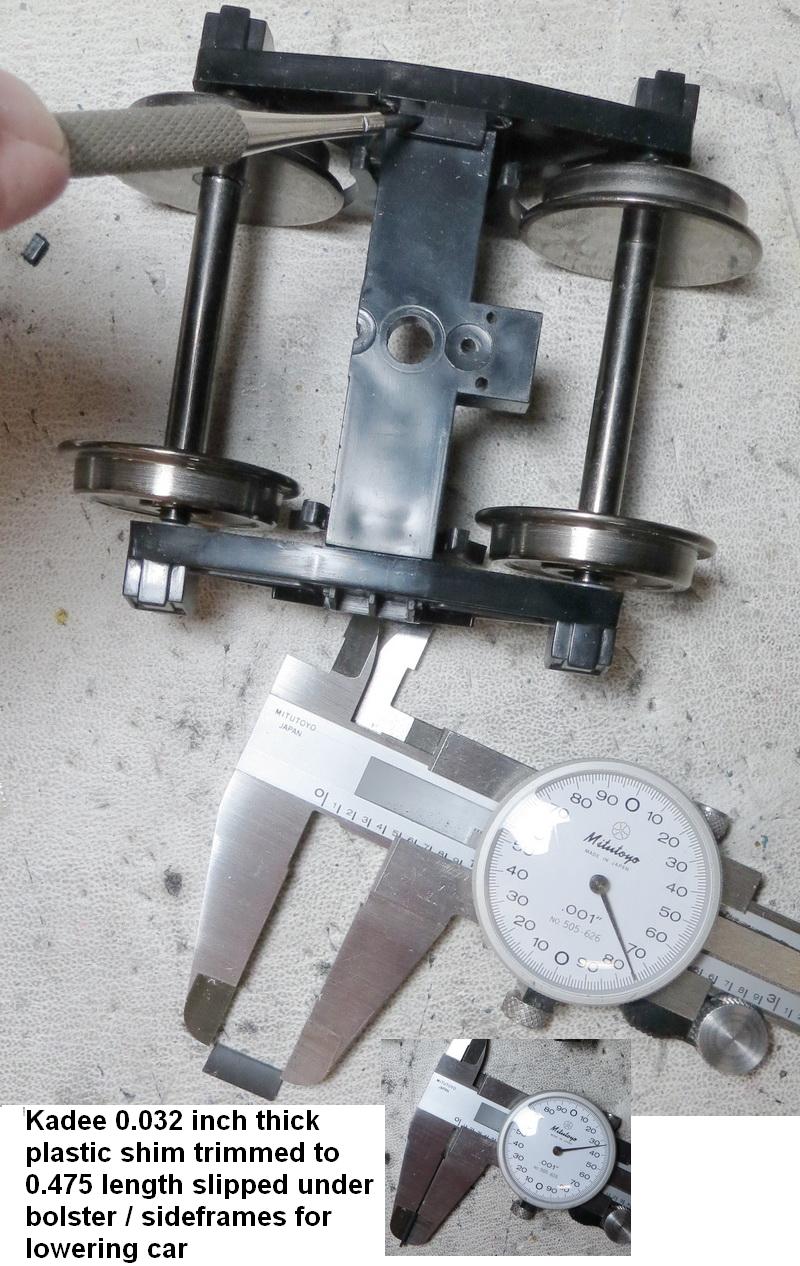 If the plastic Kadee shim is not available, substitute something else - like cutting out a tiny piece from roofing paper.

Note that the truck coupler tang must be removed so it won't interfere with the body mount coupler assembly. When done, fasten the trucks to the car.

When the car is placed on level track, verify the coupler aligns with the Kadee 980 gauge - shown below. 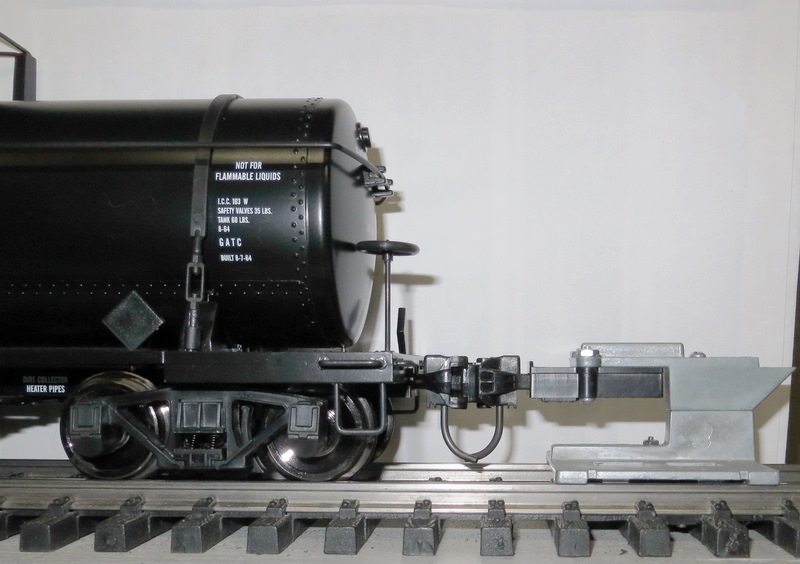 Adding Weight to the Tank Car

Adding weight helps prevent the car from pulling in off the track on curves ("string lining") when in a long heavy train.

The tank car as it comes from the Aristo factory is fairly light weight at about 2 pounds - even when the user fits Aristo metal wheels (ART-29111B) as on all the cars described here - as the example ATSF car shown below. 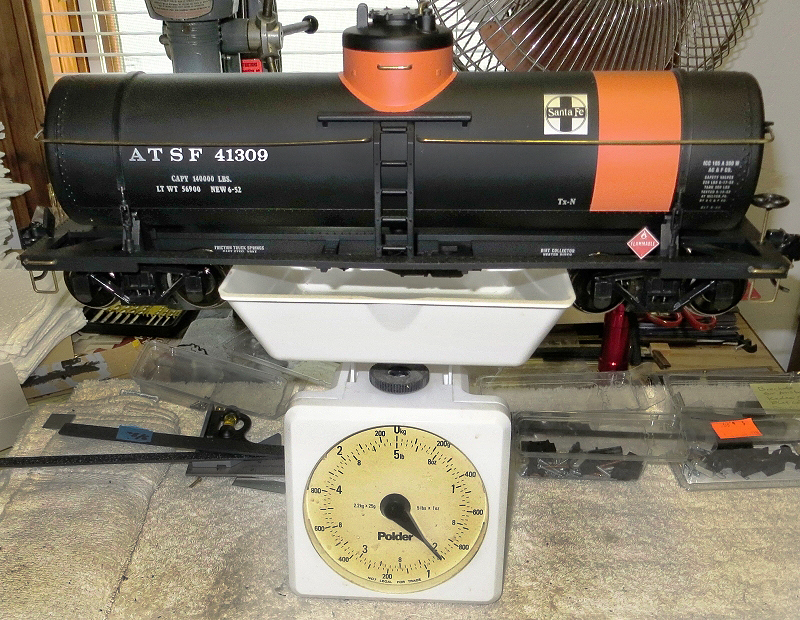 I used 5/8 inch diameter steel bar stock inserted through the dome opening to add about a pound more weight to the car as shown below.

(Note: To help open the dome hatch cover, pry with a piece of plastic so as to not scratch the painted surfaces. Using care, once the hatch is free to move, the long vertical slots into which it fits and pivots allow it, also, to be removed when placed at an angle; sometimes it just falls out.)

The car now weighs about 3 pounds - shown below. 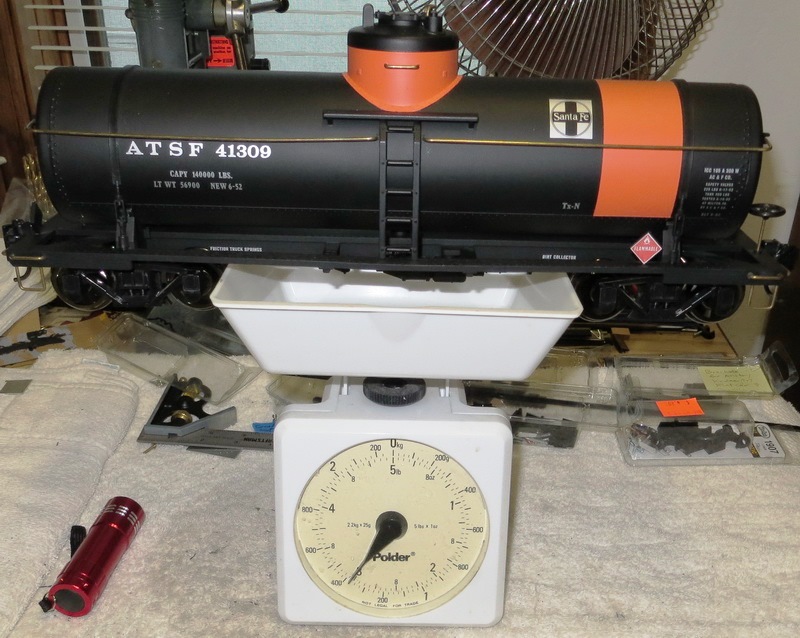 Note that some cars may have an end cap that is loose from the tank; normally it's glued in place. (There is 12 3/4 inches of available distance from end to end within the tank.) if so, the full length 12 inch steel rod weight and packing material can be added much easier - shown below with the GATX example car. 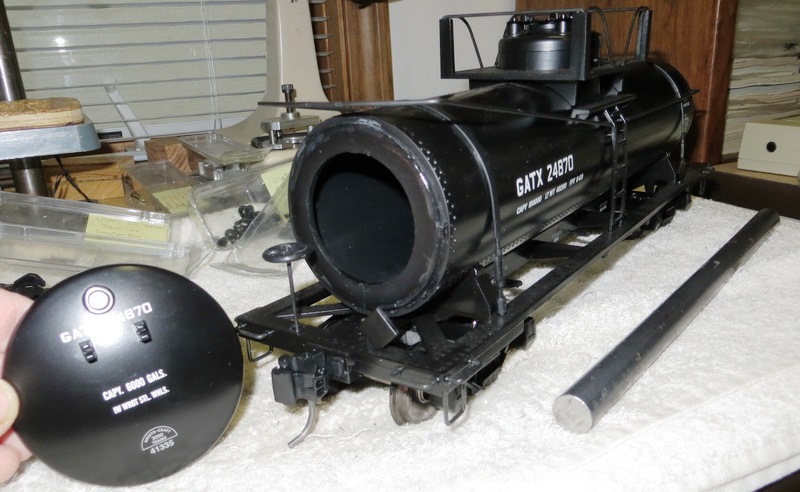 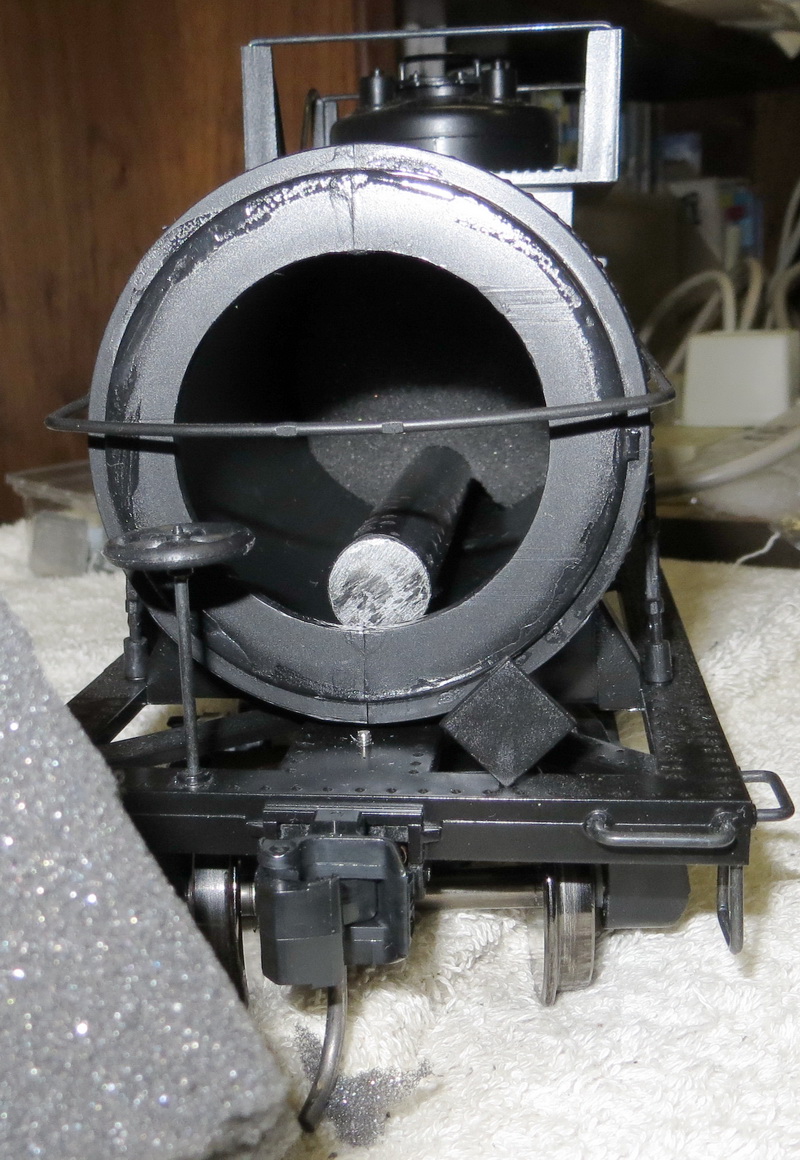 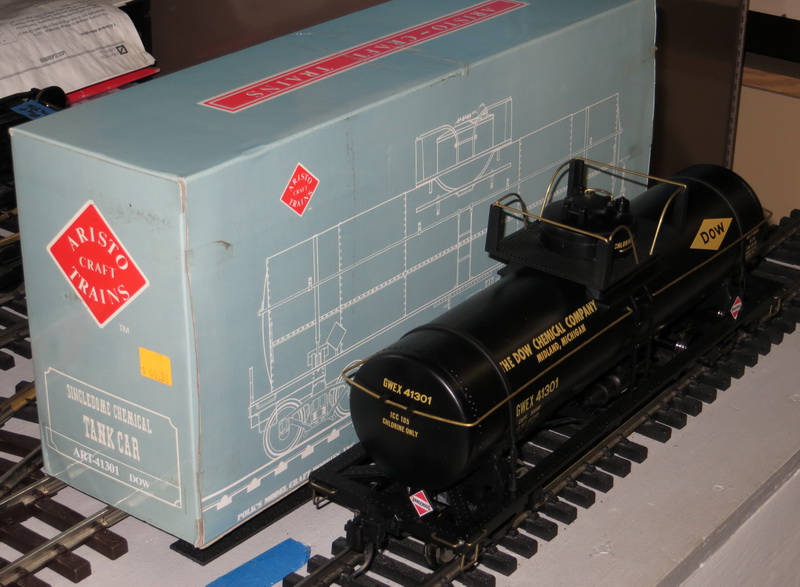 First a little history to help identify the production era of the car.

The early production run Aristo-Craft products (not limited to just tank cars) used the REA brand name. The products that followed adopted the Aristo-Craft name. Both were packaged in Gray-Blue boxes at that time. Of these, the first of the products were manufactured in Korea, then manufacturing moved to mainland China. Gray-Blue box packaged products continued in early China production, after which the Black boxed products supplanted them, and finally the Yellow boxed products superceded those and continue to the present time - but for a short hiatus with clear plastic boxed products having yellow cardboard end inserts. 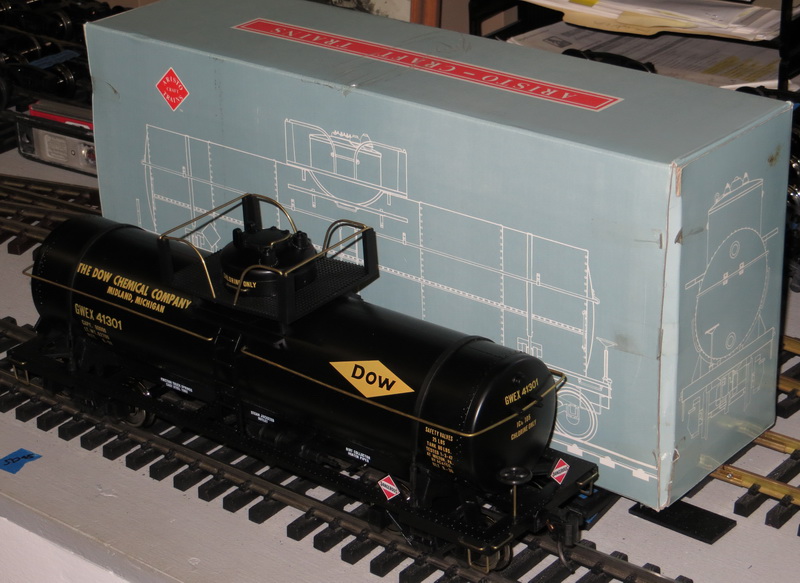 Shown is the Dow Chem car fitted with Kadee 789 centerset couplers (the traditional coupler version offered prior to the newer Generation "E" Kadee 907). The Kadee 789s and 907s are the same being of centeset types - except the 907 has the newer knuckle. They are interchangeable. 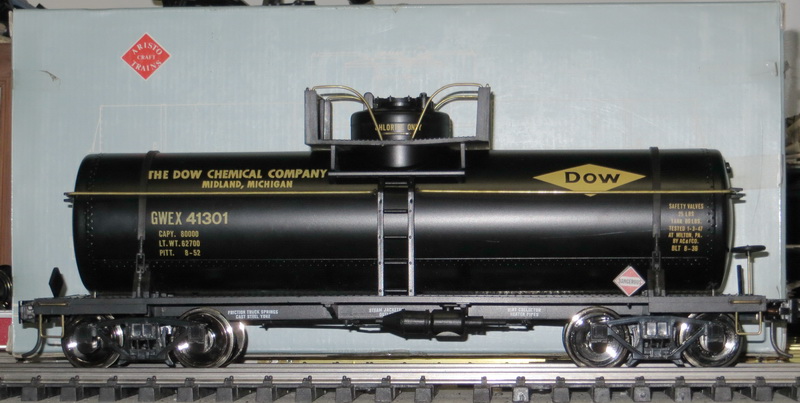 As to the tank car, it turns out that the early production version had end sills devoid of draft gear box detail at the coupler notch - or had no notch at all - when compared to the newer versions! The example Gray boxed Dow Chemical Company car not having the draft gear box detail is to be described and illustrated here. As to the centerset coupler assemblies, either of the Kadee 789 or 907 kits can be used. Interestingly, the older traditional Kadee 789 kit includes more parts than the newer 907 kit! For example, the 789 kit includes both type lids - ones with the lip and ones without - as can be seen in the the following picture. 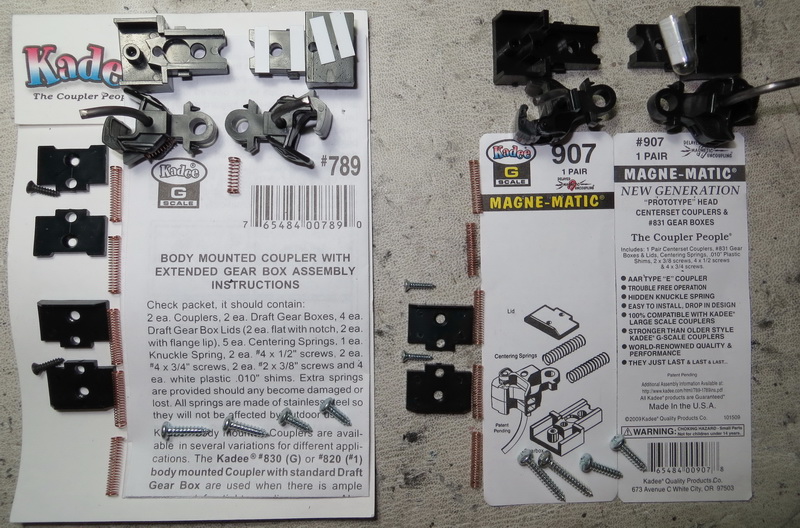 Note that the no. 4 screws provided in either of the kits are NOT to be used to mount the boxes. As described for the newer version tank car, a no. 2-56 machine screw will be used to mount the coupler boxes. I used the 3/4 inch long no. 2-56 screw and nut left over from a Kadee 906 kit. A lock washer will be needed, too.

Though the modified Kadee coupler box as described for use on the newer version car could be employed, it seems best to mount the Kadee coupler assembly having the lid with a lip so as to add detail since this old version car does not have end sill detail of the newer type car - See below pictures.

The example car described here will use the Kadee 789 kit with lip type lid. 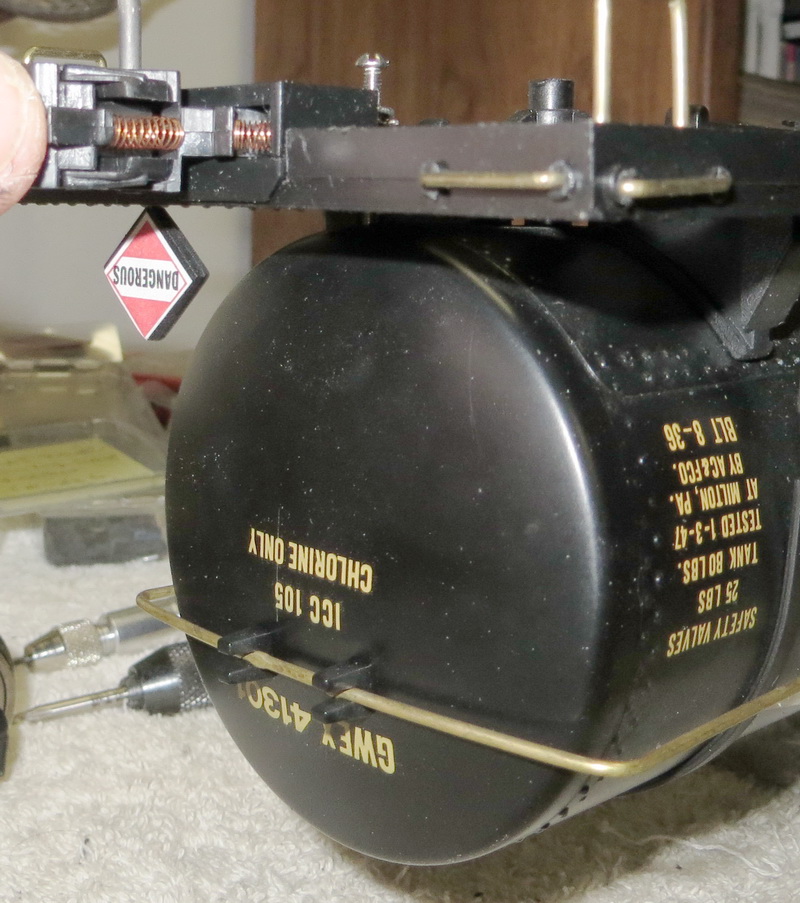 This means the Kadee coupler box and lid don't have to be altered (not modified like that described for the newer production run cars). However, the car's end sills must be respectively trimmed and notched so that the Kadee box will fit.

This method is similar to what Ron Bodner has done; however, the fastening of the mounted box differs in that it is multipurpose and done like that previously described for the newer production run car. (Refer to the previously described information, including truck alterations, when mounting the coupler boxes.)

The following pictures are demonstrable for what is to be done for the old version tank car. 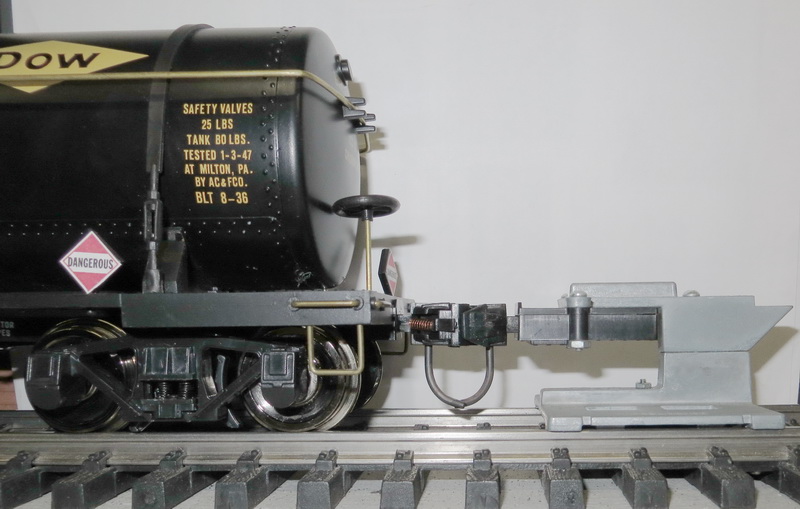 The installed Kadee 789 centerset coupler aligns with the Kadee 880 coupler height gauge. This is with the car lowered having the same size 0.032 inch thick shims placed between the truck bolsters and side frames - just like previously described for the newer production run tank cars. 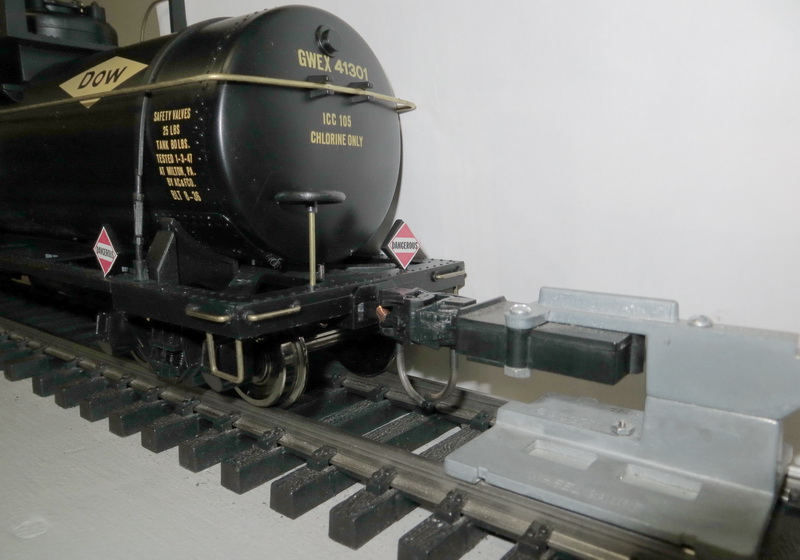 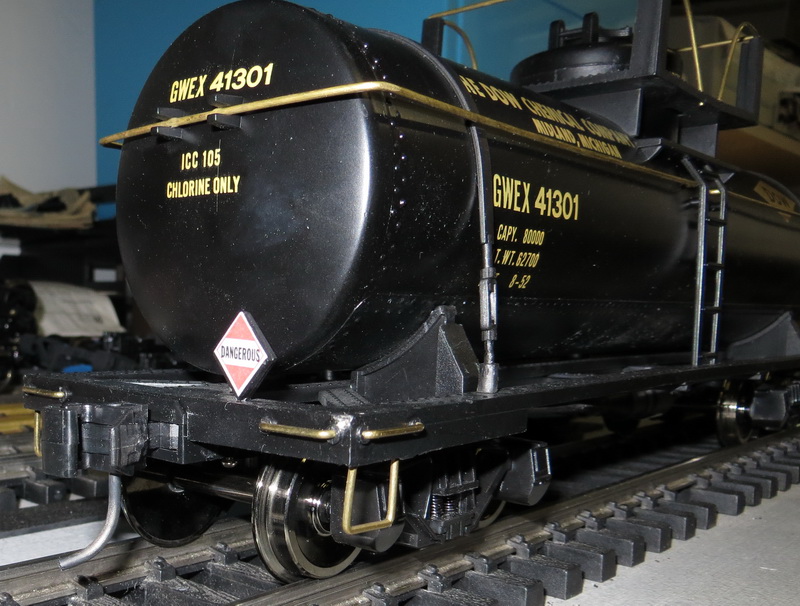 The full side view of the completed old Aristo production run version DOW Chemical car is shown below.