click to jump to the bottom Note there are EIGHT sub-pages on these cars!

This is a nicely detailed 1:29 scale model of the prototype. You need to look a bit for the exact prototype, because these cars scale out to 71' 10.75". I believe they are modeled after an east coast line of 73' prototypes.  (they are 29-3/4" from diaphragm to diaphragm). Bruce Morrill told me that they may be modeled from the Jersey Central coaches.

They are all lighted except for the baggage car.

They can be problematic on tight curves, and need some "tweaks" to run reliably. Follow the tips here to improve them. People who report trouble normally have not lubricated their trucks/bolsters properly. There is also significant differences between the new and old trucks, more below.

They also look good with the MTH 1:32 stuff, like a challenger.

They come with truss rods and stanchions, but apparently these were not used on metal frame pullman cars. I installed them at first but had to snap off an air tank to get them to fit. Turns out they are not on the Santa Fe and most other prototypes.

If, after lubrication and wheel gauging and clearance modifications, if you continue to have derailments, other than bad wheel gauge (see below), you have trackwork issues. ALL long cars will amplify any poor trackwork. Follow your train around and watch the tops of the cars, and if they change slope noticeably, then you have a vertical transition in your trackwork that needs attention.

This page serves as the "launching pad" for my "journey" so far. There are 9 sub pages, some of which are Ted's vignettes, and most of the others are my efforts to body mount couplers and all the other things that needed improvements or changes because of this. Note I have not added ball bearings to the trucks yet, which seems the next step since I am seeing a lot of rolling friction, but I need to modify the trucks first as there is a serious issue with the wheel faces rubbing severely on the truck itself.

There are technically three versions that were made:

Version one is the originally released version. There are a lot of reported problems with derailments, especially with the 3 axle trucks.

To identify version one: A lot of the trim details are unpainted, handrails and grab irons. The windows frames were sometimes a gold color. These have the original type trucks with the 2 metal half axles joined with a tubular plastic piece in the center. More on trucks later

Version two apparently started in 2004. The new versions are printed with a builders mark "Aristocraft Trains" and the year.

Most of the details are blackened or painted. There are some reports that the cars sit lower, lowered bolsters. I cannot comment on this.  The major improvement is in the trucks, they have more side play in the center wheelset, and there is a ridge across the top of the truck that acts as a sidebearing. This stabilizes the car. Also many of the details are now blackened, like the grab irons.

Late version 2 cars also came with flexible diaphragms instead of the rigid plastic ones.

Version three seems to have appeared without any fanfare in October 2008. There was a promotion of the doodlebug and a free HW coach. The both came with LED lighting, there is a circuit board inside, with a full wave bridge, and a small cap to minimize flicker.

Out of the box tips:

I cannot stress enough that you MUST lubricate these cars out of the box. They WILL derail otherwise, trust me, save yourself the aggravation!

Be sure to oil all the journals, these cars can have a lot of drag if un-lubricated. Most of mine came dry. With the metal journal bearings, I use a lite oil, from Hob-E-Lube. Also note on the old style trucks the face of the wheel can rub on the truck frame (top of the wheels can rub on the frame, especially the center wheels on the 3 wheel trucks).

Greasing the truck pivot areas, the main pivot and the curved slot. Make sure there is no hangups or rough spots, I use Hob-E-Lube moly grease.

Mine derailed right out of the box. Many of the journals appeared dry. After lubricating the journals and the underside of the body where the side bearing rubs, all derailments ceased immediately.

I cannot tell you how many people complain about these cars, and if they would just lubricate them properly 99% of their problems would go away.

Very important: If you have the new style trucks, they have a rib on the top of the truck that goes from one side to another. You need to grease where it rubs on the underbody, this is the main reason for derailments.

If you have the old style, you may notice that there is very little clearance between the truck and the 2 screws and bosses near the vestibule. Flat head screws will give you more clearance, I think these screws hold the floor "sandwich" together.

Also on the old style, the inboard side of the truck can rub on the 2 ribs that are tapered for clearance, I would cut them down flush with the chassis so the truck cannot rub there.

As with ALL Aristo products, the wheel gauge is way off. (Well at least they are consistent ha ha). Normally the back to back is way under gauge.

There are just 2 screws at each end of the roof securing it. You can remove these 4 screws and the roof without taking anything else apart if you are careful.

You need to remove the trucks first, remove both pivot screws, and GENTLY move the truck off center to let things clear. BE CAREFUL, do not pull hard or you will tear off the track pickup wires. Then you remove the end cap and the vestibule. This is a bit complicated, read the page on this.

I have put these in separate pages. Summaries and links below.

There are several areas that the truck will hit or hang on as it swivels. There's so many it's absurd. Also, since the main pivot point of the 3 axle trucks is way offset, the trucks do not even sit level, causing issues with under car clearance and suspension issues. Once you dig into this, it's really unbelievable.

click here for a page specifically on improving the underframe clearance and the "attitude" of the trucks.

A common modification is adding Kadee couplers. There are various camps on this, and thus several pages:

The #881 & #883 mounts are on the Kadee site for body mounts, but the swivel mount can have issues backing, and the slack mount couplers allow the car to car spacing to vary so much you cannot get close coupled. I do not recommend this conversion method.

You can also truck mount and the Kadees, but this has the typical issues with large offset couplers and problems are worsened by the exceptionally long tang on the truck, so that the couplers will override often and uncouple. I do not recommend this installation method.

click here for a method utilizing the Kadee body mount shim, but with close coupling and "lessons learned" from my friend Ted Doskaris.

Improving the trucks themselves

click here on some improvements on the trucks & how to disassemble

be sure to gauge the wheel, they are ALWAYS undergauge

I recommend adding a pound or so, prototype scale weight would be 6 to 7 pounds.

There will be another page on how I stuffed weights in, also refer to Ted's comprehensive vignette as above.

Going to the bathroom:

Be careful! The toilet seat is on backwards, at least in the Observation car! Ha ha ha, just had to show this! Photo posted on the Aristo forum by Tom Thornton. 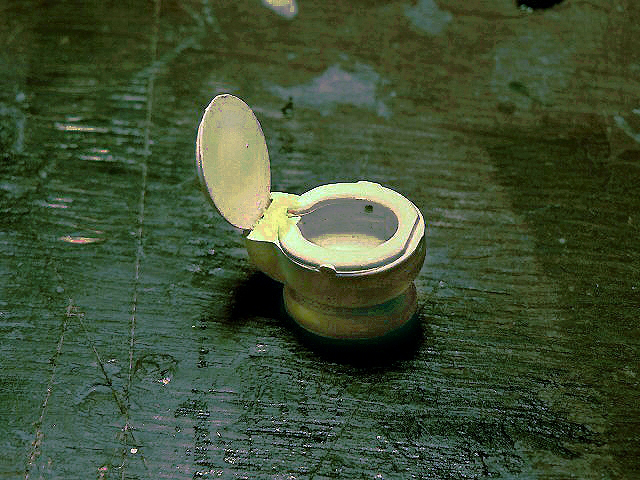 A picture of the one I found in my observation car: Oh, and even the sink gets put in upside down some times. 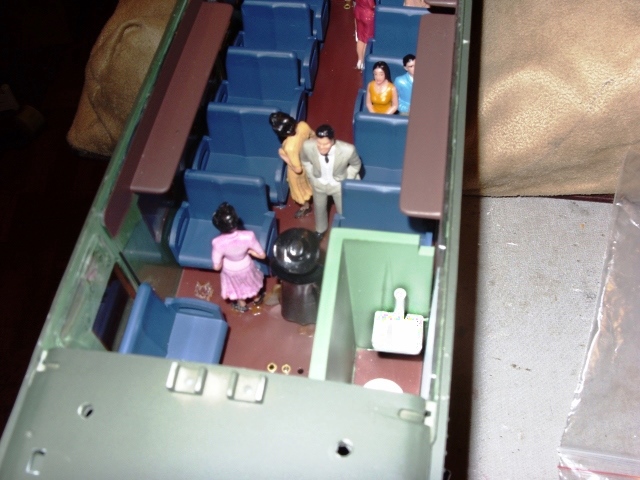 Just notes on the Aristo part number, and the closest record I could find of the prototype. Aristo did a reasonably good job of numbering the cars as compared to the prototype.