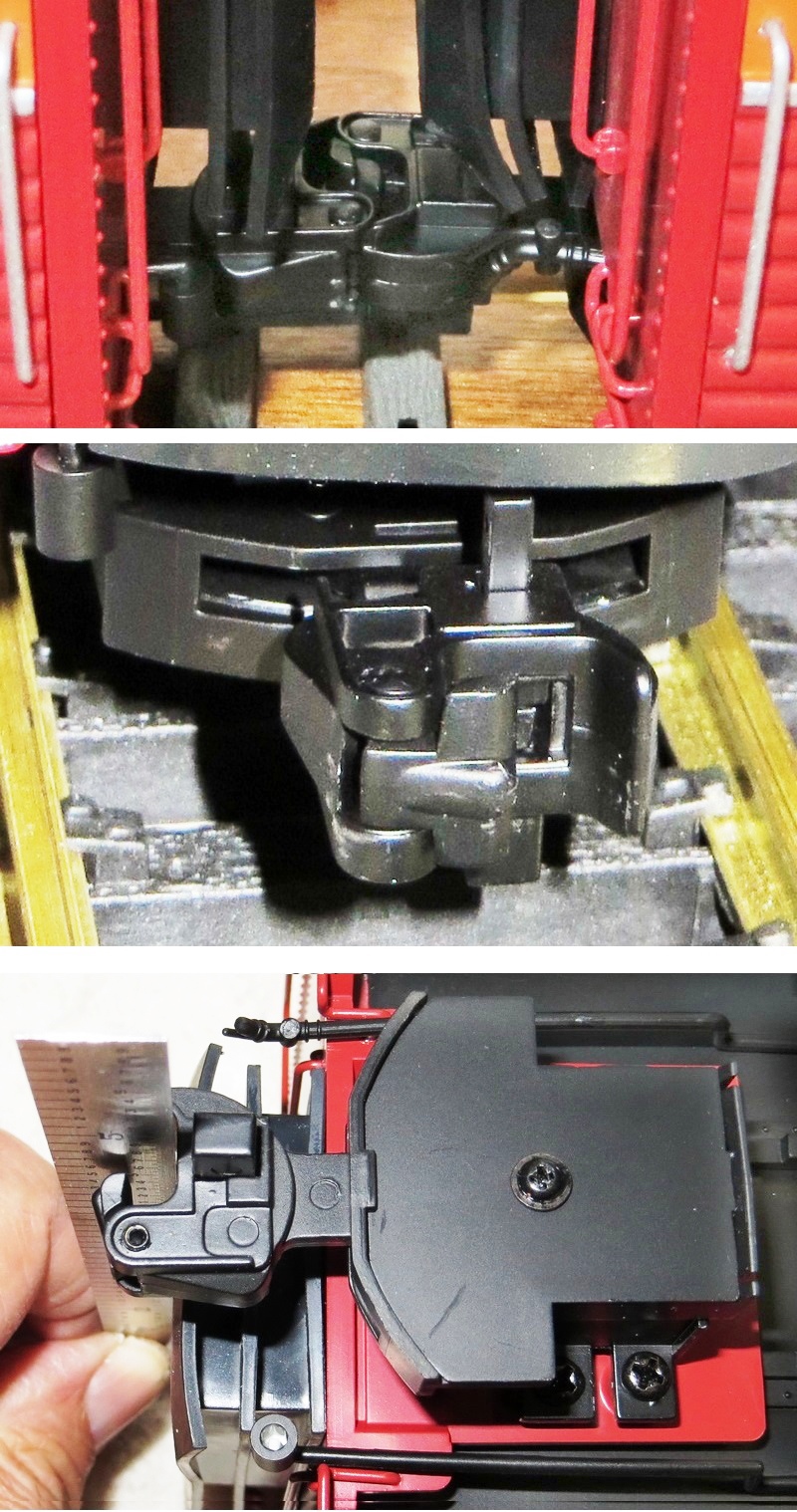 The coupler has pretty good side to side swing, and the coupler itself has a long, straight shank and a slot in the shank for a spring, very similar to how the Kadee 830 works.

Originally, I had thought to convert all cars to Kadee 830's, but so far, I have had no issues, and I have some overly sharp vertical transitions, and my minimum curve is 9.5' diameter. I'll convert the head end car to Kadee to allow the locomotives to uncouple.

I may leave things this way, since on my small layout, the passenger train will normally function as a unit train.

I have Kadees recommendation below.

I have embedded a method from Llyn Rice on mounting Kadees

and be sure to check out Ted's extensive "vignette" on mounting Kadees, from the link at the end of this page

The Kadee site has a conversion guide for fitting 830 couplers to the cars: Click here to see their guide:

This conversion entails making a spacer and mounting it on the car floor, and then bolting the 830 to it.

I mounted an 830 on my RPO car. On my RPO car (and I suspect the baggage car), USAT has a slightly different arrangement than is shown in the Kadee guide.

I followed the conversion guide on the Kadee site, but instead of tapping holes in the spacer plate, I drilled small holes to mount the 830 with the  2-56 screws supplied with the 830.

There are 2 ridges on the body (where the shim will go) that allow clearance between the shim and the spacer so the heads of the screws will fit. Saved a lot of time. The shim is necessarily thinner since these two ridges rise from the body. My shim was 0.09"

Also, since the RPO does not have a vestibule at the end, no messing with the springs and other junk as mentioned in the conversion guide, a lot of time saved.

Again, on my curves of a minimum of 9.5', no problems at all, and they couple nice and close.

The following is a copy of a post in the MyLargeScale archives Llyn Rice, the thread is titled: "USA Trains Aluminum cars and KaDee's". I've gotten permission from Llyn to reproduce it here since the archives are a bit harder to search, and not everyone is aware of them.

NOTE: this close couples the cars, Llyn reports it works fine on 20 foot diameter curves! If yours are tighter, maybe NOT reversing the mounting block will do. I would advise mounting the coupler and testing 2 cars before finalizing anything.

With that said, Llyn's technique is the easiest I have seen for these cars:

"Here is my explanation for how to install Kadee #789 couplers on USAT coaches. There are some differences between the end of the coach which has doors and the other end. We'll start out by converting the end without doors.

First, remove the coupler assembly as shown in figures 1 & 2 and discard.

Remove the USAT draft gear box and discard. Retain one of the screws for re-use.

Remove the USAT draft gear mounting block and retain it and its screws for re-use.

Assemble the Kadee #789 coupler into its draft gear box oriented as shown below.

Prepare the Kadee #789 coupler assembly for installation by reaming the hole in its tang to fit snuggly onto the boss inside the USAT mounting block.

Using the screw which was saved from figure 3, mount the Kadee #789 coupler assembly as shown. Note the orientation of the USAT mounting block feet.

Reinstall the USAT mounting block with its original screws as shown.

Check the coupler height with a Kadee gauge. Some shimming may be necessary. I didn't need to do any.

For the end of the car which has doors, the USAT mounting block will extend too far back and must be cut at the yellow line.

The folding step units for each door have coil springs which hold them either up or down. One leg of each spring bears against the side of the draft gear box. Before removing the USAT draft gear and coupler, take hold of the spring leg and disengage it. After the Kadee #789 is successfully installed, re-engage the spring legs.

So, there you have it. It's very straight forward and they have worked well for me on 20 foot diameter curves. I don't know how tight a curve they will tolerate. The rubber diaphragms touch lightly and the train looks quite convincing.