This section is for miscellaneous electronic items, that span all power systems, or do not fit anywhere else.

How to use a multimeter

So many people get a meter and have no clue how to use, basically the technique for measuring voltage is like water pressure, you can touch the leads anywhere to measure the voltage. BUT measuring current is like putting all the water in a pipe through a fan blade to spin it. Measuring current requires you to actually interrupt a circuit somewhere and put the meter "in line" like the water meter for your house, i.e. ALL the water for your house flows through the meter, and where the meter is is very important.

There are a number of places that sell nice little automated controls to use on DC. Here's a company that has stood the test of time: http://www.rr-concepts.com/

I try to use circuits that have parts carried by Radio Shack, but they are slowly phasing out parts, and when you used to be able to buy a resistors in different values, often all you can get is an "assortment".

Internet ordering is probably where you will need to go, try DigiKey or Mouser or All Electronics

I recently found what seems to be identical to the reed switches that come with the QSI boards, these are nice general purpose reed switches. Look up part number 59025-010-nd on the Digikey site

What is a "full wave bridge rectifier":

Here is a picture of the most requested item, a full wave bridge. Normally, it is used to convert AC into DC, but you can feed it DC that changes in polarity to get DC on the output that is of known polarity. It can be built from 4 diodes, or you can buy these many places all in one unit with 4 leads. The leads show + and - output, and two, the inputs have a "~" on them (Means AC input). The use that many people do not consider is taking DC of any polarity and outputting DC of a "known" polarity. Add a capacitor for uninterrupted  power:

Notice the full wave bridge rectifier from the track? This way you make sure you have a known polarity to your capacitor.

The capacitor is a storage device, often like 3,000 to 50,000 mfd (microfarads). The bigger it is, the longer it can supply power, but the downside of bigger, is more size and longer to charge. Be SURE you select a voltage rating WELL ABOVE your track voltage, these devices are NOT tolerant of overvoltage. If in doubt, pick the next voltage higher.

The resistor is there to limit excessive "inrush current" when the unit is first connected to the rails. The capacitor charges up, but it looks like a dead short for a brief time as it is charging. Use ohms law to set the resistor value. For 18 volts track power (max) a dead short simulates a discharged capacitor, the worst case. So with V=IR, an 18 ohm resistor would limit the inrush current to one amp. Note that you should use a resistor of high enough wattage, again if you use the worst case, W= I2 R, then you have 18 watts! Better choose a resistor to about 1/4 amp, so for 18 volts, you want a 72 ohm resistor, and then the wattage would be 4.5 watts. Since you would not be doing this all the time, try a 2 watt resistor.

There are "keep alive" circuits with "super caps" which just are more capacity in a smaller form factor, and additional components like resistors and diodes to control the charging and discharging current "peaks" of the capacitor.

How to use a full wave bridge to make a voltage "dropper" to fix overvoltage woes:
(works on DC, AC, DCC)

Sometimes you need to drop a voltage by a fixed amount, maybe to a motor in a loco that runs faster than the others, or to allow the sounds of a sound board to fire up before the loco moves.

Many people just figure to add a resistor in the circuit to cut the voltage down. But this is a bad idea in general. Ohms law says that the voltage "dropped" by the resistor is the product of the current times the resistance. Well looking at that equation, if the current changes, then the voltage drop changes. Most things we do have changes in current, certainly a DCC decoder or a locomotive motor. (There are some cases where you want this, but not here).

So what we are after is a circuit that provides a CONSTANT and CONSISTANT voltage drop. Well, guess what, this is what a diode does! It turns out that a silicon diode has 0.7 volts of drop no matter what the current.

Traditionally making a voltage dropper would be with a long series of diodes, head to tail. Every diode in the chain drops 0.7 volts. But diodes only work in one direction, you you need TWO chains/strings of diodes, in parallel, one string the opposite polarity of the other. This is traditionally what you get when you buy commercially:

You can see the two "chains" or "strings" of diodes, one for each polarity. This one drops 6 times 0.7 volts or 4.2 volts. Pretty big.

But there is a more compact and efficient circuit to do the same thing:

In the example below:

This is good for reducing voltage to a dcc decoder that does not meet nmra specs on max voltage, notably the SoundTraxx Tsunami, often OEM's in Bachmann and Piko locos. in this case you should add this circuit to one of the "track pickup" legs, i.e. where the wheels and skates feed the decoder. This will fix the non-NMRA compliant problem where the decoder itself cannot handle the DCC track voltage. NMRA specifies 24 volts max on the track and

Another application where you would put this on a motor, is where you have a loco on DC

It allows you to slow down a loco that is much faster than others. The use of diodes avoids the non-linearity of resistors and also the heat they generate.

Below, notice your "resistor" uses the AC inputs, nothing else touches the Plus and Minus as in the usual implementation of a FW bridge. 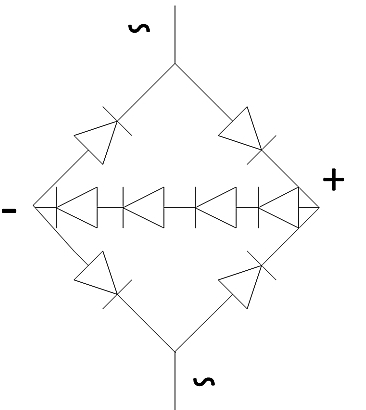 Below is the dropping circuit as above right, you can see the full wave bridge and the diodes. (Precision electronic assembly courtesy of Mr. R.J. DeBerg)

The markings on full wave bridges is often abbreviated, in this case the Plus is marked, and the Minus is always opposite. The "~" (typically AC input) wires are the other 2 wires at 90 degrees to the Plus, and they are interchangeable. This convention maximizes the space for the part number and mfg symbol. 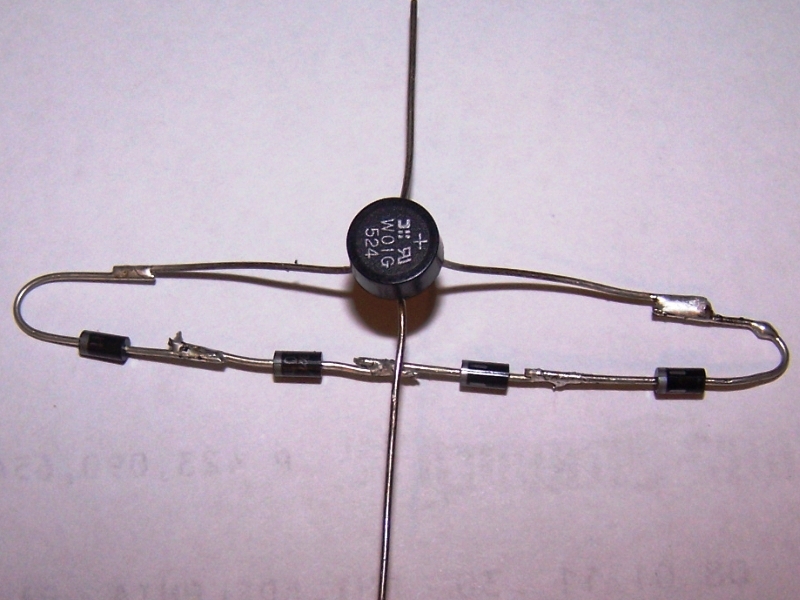 More on rectifying AC (to DC):

When you feed normal AC into a bridge rectifier, you get a series of "humps". To smooth that out, you add a filter capacitor. What you get out is DC, but with some "ripple". The less the load, or the bigger the capacitor, the less ripple. 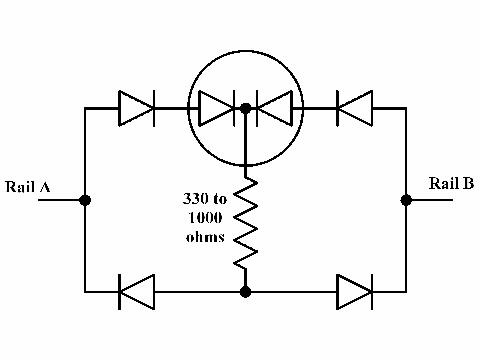 How to drive a bipolar LED from 2 DCC functions: 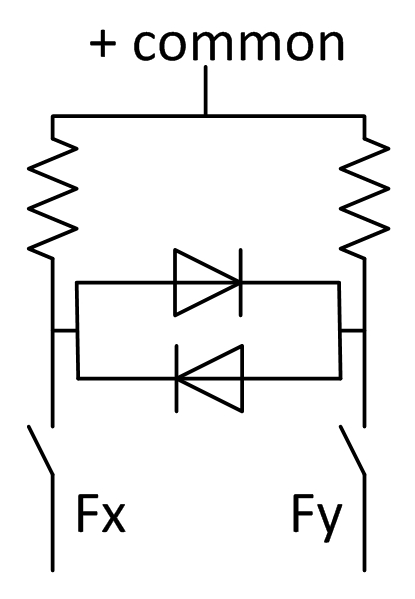