Most smoke units indicate how many drops of fluid to use. I have tested 3 smoke fluids with a syringe and found that they are 37-39 drops per ml / cc. (Aristo, ProtoSmoke, TAS) I used an Accucraft 5 ml syringe (#14224) , but they are all really the same, the droplet size is a function of the surface tension of the fluid.

I recommend you count out your droplets from your smoke bottle and get your drop/ml down and then just use a syringe.

There's a number of manufacturers that sell smoke fluid. I have had good luck with Aristo fluid (but they are now out of business), but no bad experiences with any of the others. Here's a place that has scented fluid: http://www.megasteam.com/index.html

There are many different smoke units from Aristo, from the simple heater type that is used in the cabooses to the latest style, called the "Aristo Prime Mover" smoke unit with electronics and a fan.

CLICK HERE for a specific page on all the Aristo units under Aristo Motive power.

For adding to other locos and purposed of comparison, only consider the "Prime Mover" one, with the fan built in.

When these work, they usually put out a reasonable quantity of smoke, and have a reasonable run time. Figure on 20 minutes on a filling.

Do not overfill, even though the reservoir can handle 4.5 milliliter, the design allows fluid to slop or condense onto the circuit board, and it attacks the electrolytic caps, swelling the rubber ends and popping them off the circuit board. This is one cause of failure. There is no way to keep fluid from condensing on the circuit board, since the circuitry is in the chamber with the fan, and that chamber is connected to the fluid chamber.

They are very inconsistent and many will only run for a few minutes before shutting off. Just keep returning them to Aristo until you get a good one. (No malice intended here, check the Aristo forum about the ratio of good to bad units).

This one is the best one, used in the latest locomotives, fan driven and a small microprocessor to control the heater. Note: for running in "direct smoke drive" where you need direct and independent connections to the motor and fan, as when controlling the fan and heater with a QSI, Zimo, ESU, etc.

First, unsolder the connector. This will also give you room to let the wires out without cutting the case. You can see 1 of the 3 solder blobs at the top center of the picture below.

Now on the bottom of the board (which faces up in the unit), cut one trace by the large hole as shown. A carbide disk works well.. make sure the copper is gone.

Now wires in the 4 spots as shown. The plus for the fan is the white wire in this case, you can use red instead. the 2 wires for the smoke unit don't  matter, i.e. there is no plus or minus. On the top of the board, cut THREE traces. Seal the opening where the wires exit so all the fan pressure goes out the smoke exit, you can use some duct tape or maybe a blob of silicon seal.

IMPORTANT: test with an ohmmeter, neither of the smoke wires should have ANY continuity to either of the fan wires, and vice versa. This is important!

I don't know much about it, but the output looks fantastic. It draws 2 amps at 12 volts though! Several people have posted using it, but they have not modulated the smoke output, most likely because of the large amp draw. In 2012 they announced you could vary the fan speed, have not tested this unit. this will be a tough fit in most locos. You might consider putting it in the tender and then running a hose to the front of the loco.

I've seen several people use this, and really overdrove it and melted things. This unit puts out a lot of heat, so mount and duct it properly.

LGB usually uses Seuthe smoke units, just simple heating elements, no voltage regulation, and they are not known for high smoke output (they cannot since there is no regulation, power monitoring, etc)

Most modern LGB locos have decoders or are decoder ready, so the 5 volt unit seems to be more common. Some people have had issues driving these smoke units from a DCC decoder, and have switched to a lower voltage model to allow more smoke volume, there is a model 4E Seuth which is rated 3 to 4.5 volts (but often sold as a 5 volt model) This 4E model has Brown and White wires, as opposed to the 3 other units above.  For example Piko sells the 4E as a 5 volt unit part number 36142. Thanks to R. Wolfe for this information.

Can use either hall effect sensor or a SUSI bus connection (weird on a DC component). Holds 4 to 6 cc of fluid. Note that this unit can draw up to 4 amps.Has dip switches for diesel/steam, and 4 or 2 chuffs per revolution for steam mode. Around $100 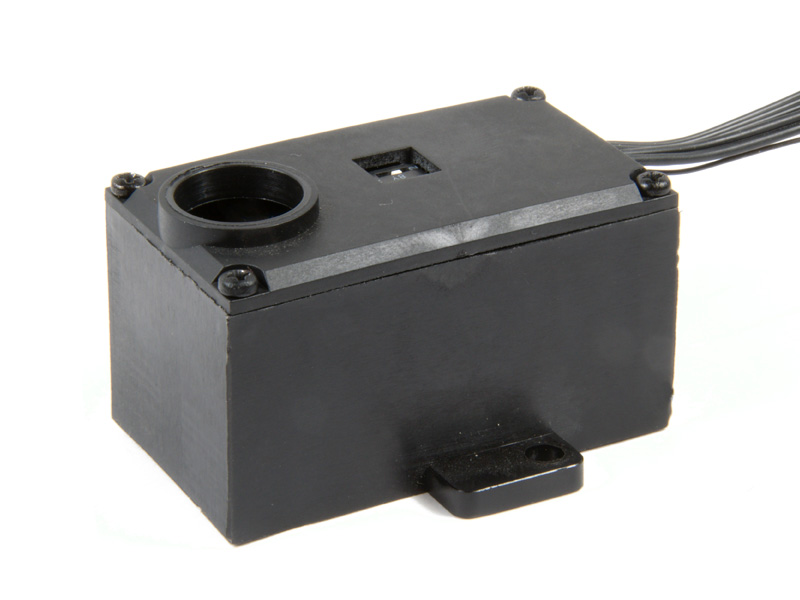 The same product that will take DCC signals. About same price as the DC model and same specs. 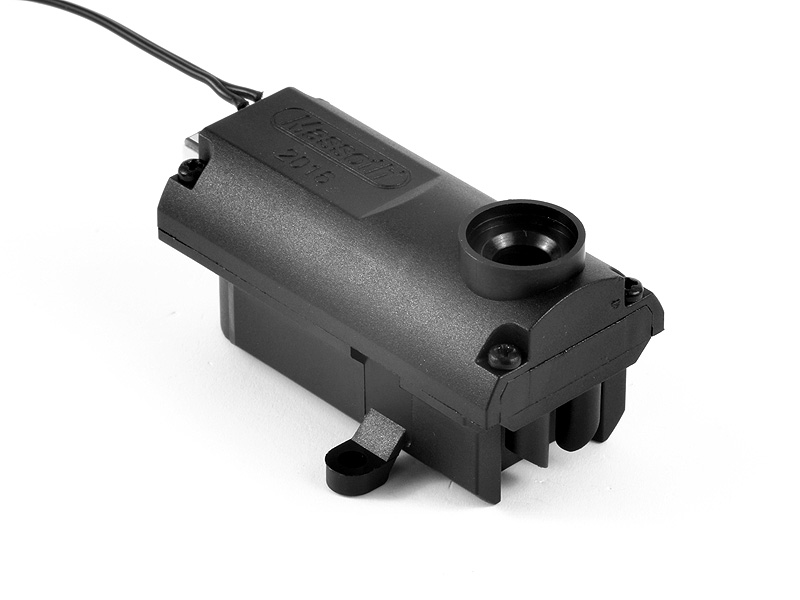 Many people are trying these in customizing, but they are really large: (the MTH is on top, the TAS below). 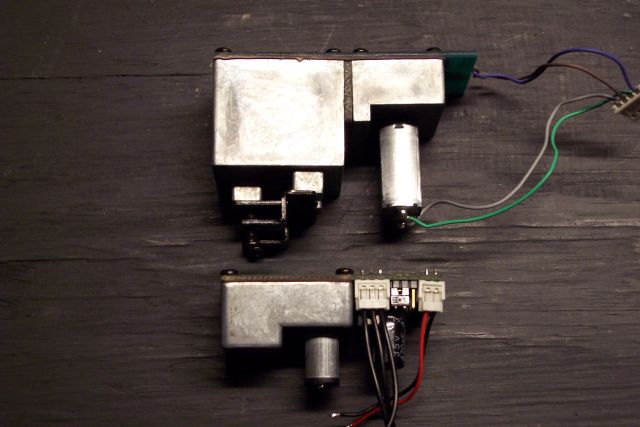 I don't know the MTH model above.

The motor and the heating element are directly connected to the 4 wires, no electronics involved, in the stock MTH systems, all the brains are on the mth board.

One negative, there is no local heat sensor to monitor the actual temperature of the heating element.

This company made one of the nicest aftermarket units, and they have 2 modes, a diesel mode, where the fan speed increases with speed, and a "puff 'n chuff" mode, where you can pulse the fan to match the chuffs, usually tie to the chuff switch. Unfortunately, in 2009, they were bought by Lionel, and then deep sixed. You will find these units in USAT locos sometimes, like the Big Boy, the Hudson, etc. (not in the normal line of plastic bodied diesels). Too bad.

Here is a top view: 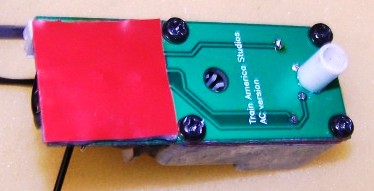 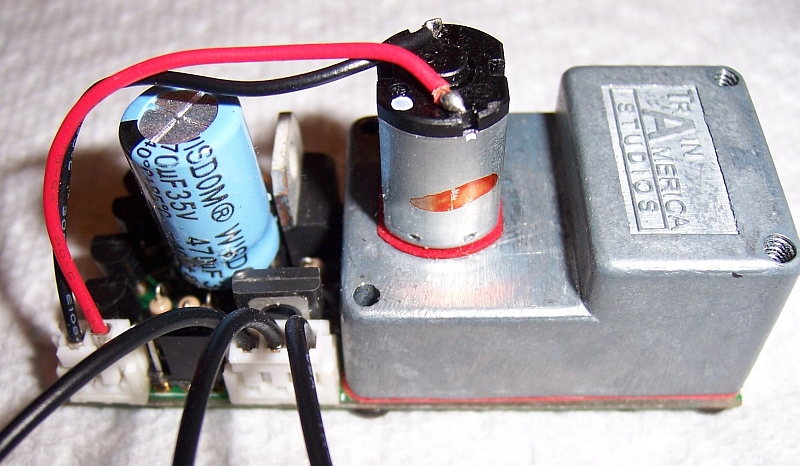 Shown belos is a TAS installation in an Aristo mallet by R.J. DeBerg: 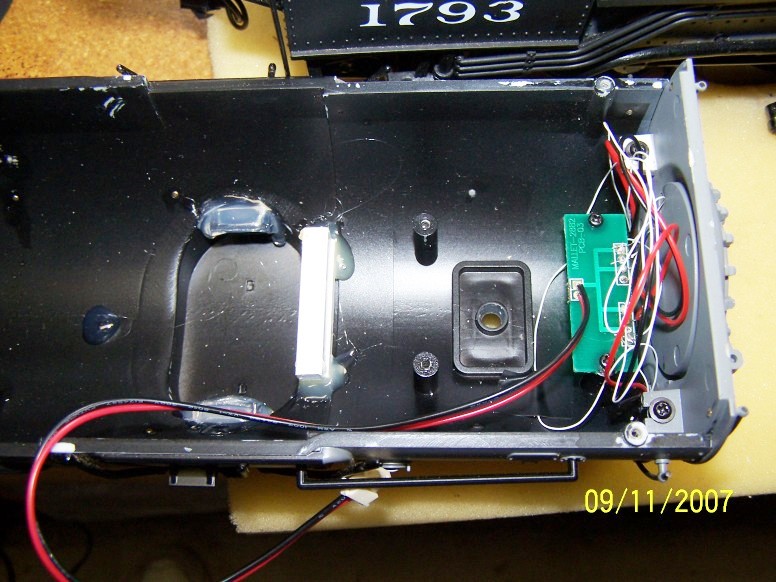 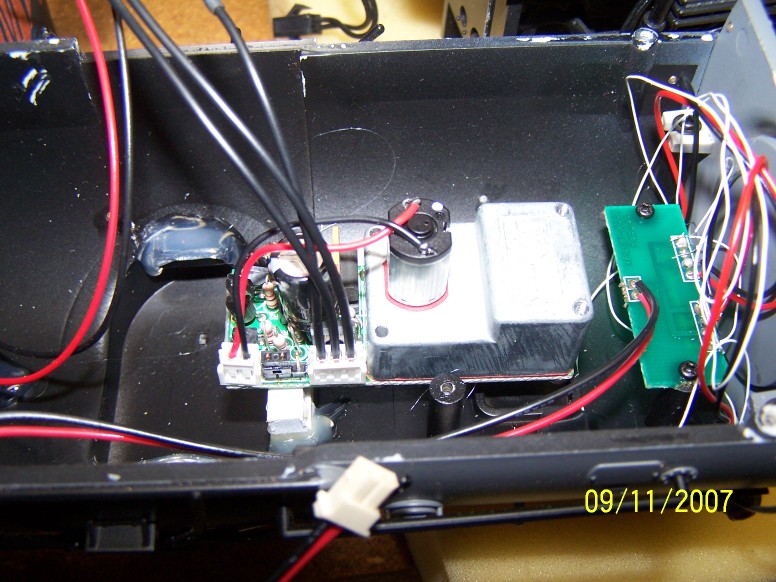 I received mine recently, and will use the "puff 'n chuff" feature on my AML K4, which has a chuff cam. The model I got is the TAS-2004.

When you order a DC unit, you need to tell them what operating voltage you use. I could not get them to give me a straight answer, but I think they set a regulator or dropping resistor somewhere. The DC unit comes with a full wave bridge rectifier (so the unit can be connected to the rails irrespective of polarity), so you can use them on DCC also.

It is a good looking unit, with the circuitry isolated from the smoke fluid. The fluid reservoir and the smoke chamber are in one metal casting, which is sealed to the circuit board.

They also have a TAS-1022 "Puff N Chuff" synchronized smoke upgrade. It is a control for a fan driven unit to pulse the fan in time with the chuff switch. It also includes a 5 volt power board (I assume that is needed to drive the logic circuitry) in addition to the Puff N Chuff board. I will have to try this out on the MTH fan when I try the MTH unit.

An inexpensive smoke unit, with just 4 connections, 2 to the fan, and 2 to the heater, ideal for use with a decoder that drives them directly. Originally Train-Li offered a rewired Aristo-Craft unit re-wired to bypass the original regulating mechanism and just connect directly to the fan and heater.

In theory you can also run the heater at a constant 5 volts.

Again, like Aristo, there have been several variations. The early ones were a small square unit, very thin, no fan, just a heating element and a wick and did not work well.

The picture below (courtesy George Schreyer) shows the 5v regulator board, and 2 smoke units, the one on the right shows the heating element, which is vertical, and the small redervoir. So this is a simple heating element that just vaporizes the fluid, small fluid capacity.

The newer smoke units are metal bodied, have a fan and a separate circuit board that controls the motor and the heater. I have found these to be very reliable. The quantity of smoke is not great, but they work and come stock.

In stock form, i.e. running from the USAT power board, using 40 drops fo fluid, one quit about 9.5 minutes, the other 11.25 minutes, then turned itself back on and ran another few seconds, less than one minute

they both restarted when additional fluid was added (motors started, did not remove power, engine was shut down)

These units lend themselves very well to "direct smoke" setups where the decoder drives the fan and heater directly, like the QSI and Zimo.

Reservoir capacity seems to be about 2cc. The fan runs on 5 volts and the heater element gets around 6-7 volts. 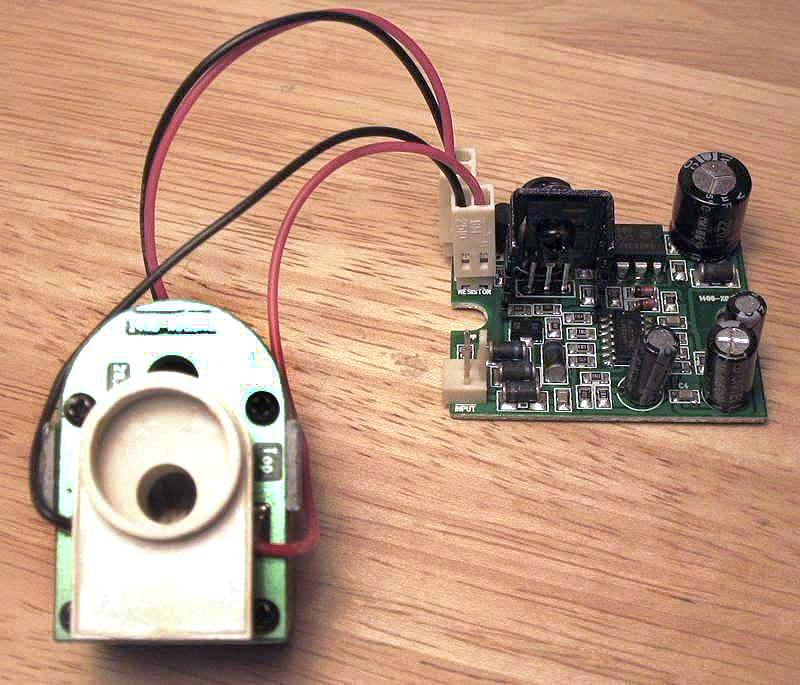 Here is a USAT smoke unit in "direct smoke" mode via a QSI Titan decoder: