There is a lot of foam packing. Check the loco carefully. I had a derailment on the first few laps, found I had left foam packing between pilot assembly and the chassis!

On that pilot, it has a slot to allow it to move side to side. Get some better grease in there and it will move more freely. I like moly grease where there is metal to metal, the moly "plates" onto the metal, very slippery.

Take some plastic compatible grease and fill all the little holes in the tender plug and then work it in and out of the socket in the engine, I put grease in it twice and it was much easier to connect and disconnect. When new, there was so much friction I was afraid of damaging something. A number of people have broken the socket loose on the loco from too much pressure.

I pick my loco up by the siderods. They are hefty, and if you try to lift by the body, you WILL bend something! There's just too many details!

This did not happen to me, but I have heard that several people have burned out the 6v regulator that powers the lights. Turns out that the regulator bolted to the chassis (thus electrically connecte), and apparently the piping on the sides above the drivers can short to the drivers and blow up the regulator. This tip comes from Ray Shoop, where he noticed that people often pick up the loco and bend this piping inwards, they contact the drivers, the paint wears off, and short circuit.

First, you need to make the mechanism work more freely.

It's easy to take the pilot off, just a flat blade screwdriver on the single screw. This screw has a large head, and a smooth shaft, and then a shoulder just before the threads on the end. This shoulder is what stops the screw and allows it to tighten.

This screw that holds it on and also the underside of the head are the bearing surfaces for it to slide side to side... i.e. the whole pilot assembly.

When you remove it, you find there is a brass washer on the other side, and a spring.

There is paint on the surface where the screw slides, and it will wear off to the brass and bits of paint will kind of gunk it up. The easiest way to remove the paint and smooth the surface is just slide the screw back and forth in the slot with your fingers, about 30 seconds will scrape all the paint off and smooth the bearing/sliding surface.

Next, the underside edge of the flat head screw is sharp, chuck it lightly in a drill, and take a bit of 200 grit sandpaper to take this sharp edge off. Since it is a SS screw and the pilot is brass, that sharp edge digs in and will wear stuff too rapidly. That sharp edge is how you can remove the paint in 30 seconds!

Before reassembling, deburr the brass washer. It has two sides, one with a rounded outer edge and one sharper edge (because it was punched from sheet of brass) put the rounded edge towards the truck after smoothing with very fine sandpaper, like 400 grit.

After reassembling, lube the whole area with graphite or moly grease.

(I prefer moly grease since it "plates" the metal surface and works into it, much more slippery on bare metal surfaces in my opinion.)

This single mod will make a huge difference.

Adding more down travel to the pilot truck:

The pilot spring has a lot of tension, so derailments are not because of lack of down force. It seemed to me that it had less down travel than it needed.

Since there is plenty of "up" travel in the pilot, you can "space" the pilot down a bit by putting three #4 washers on the threaded end of the screw, at the very end... they go over the threads, and stop at the shoulder of the screw.

This effectively makes the screw longer, and moves the pilot about 1/8" down, so when on the rails, you have 1/8" more "preload" down.

The only downside of spacing the screw down is you engage fewer threads into the loco. It being a SS screw, I felt that this was not a concern. So far no problems. 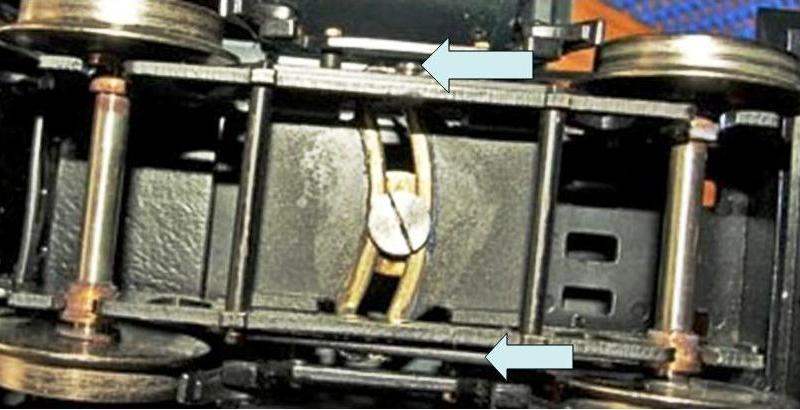 There is an additional problem with the stock K4 pilot truck. It's a bit complex, but the excessive side to side travel in the axles allows the brass bearings to also move in the truck frame. The truck has equalizing levers that press on the top of these bearings. See the arrows in the picture above. The equalizing levers are the thin pieces of metal outboard of the main frame.

The problem occurs because the bearings have shoulders on the end nearest the wheel. When the bearing moves too far "outboard" the equalizing lever now can press on the smaller diameter of the bearing. Now the bearing is "trapped" because the lever will not climb back to the larger bearing shoulder. This has the dual negative effect of "locking" the axle so it can no longer slide side to side. The second problem is that the equalizer is now pressing on the smaller diameter part, thus not setting the height of the axle properly.

The solution is to reduce the side to side play with washers so that the bearings cannot move too far outboard, and let the equalizer "finger" slip off the shoulder. After setting the back to back gauge of the wheels (too tight of course), I used 0.030" thick black nylon washers.

I took small washers, cut a pie shaped notch from them, and snapped them over the axle between the wheel and the bearing. This fixed the problem. While doing this, I also noticed that my equalizing levers did not "hug" the truck sideframes. I removed the levers, and bent them so they lay flat on the sideframes. You will need to remove the brake hanger assembly on that side. I greased the back side of each lever liberally to make sure everything moved freely.

This eliminated a derailment issue on a curve, where the lever locked the axle bearing and threw the axle height off. I have not had the time to pull this apart for better pictures of the screws, springs, etc.

The picture below show the pivot screw at the upper right. It has a head on it and a shoulder that the trailing truck pivots on. In this picture, it is being pressed up against the chassis, there appears to be a small, light spring between the chassis and the trailing truck. The picture below shows a side view of this screw, again with the truck "tang" pressed up to the frame to reveal the shoulder.

The picture below shows the pivot screw again with the tang pressed to the chassis. Be sure that you tighten this down on the flat on the motor shaft, and wiggle it (rotate the fitting) as you snug it up. This ensures you are solidly on the flat. It takes a 1.5mm allen wrench: