The first SD45's seem to have been shipped to customers in June 2001.

"After 2 years of planning, engineering, mold making, r & d, promotion and heart and soul, the SD45 is here. Patented gears and smoke systems, DCC/RCC port, steel wheels, 24 ball bearing races and 100 pages or so of engineering drawings in 3d and it just pops out of the machine and into your hands."

This is also the first appearance of the new "prime mover" smoke unit.

Normally I model an earlier era, the "transition" era. But Scott Polk wanted me to review new motor blocks, and gave me a NS Dash 9, although all I wanted was the motor blocks. I asked permission after my evaluation to give it to my friend Ted, but Scott was insistent I keep it. So, I decided I needed at least another modern locomotive to run with it. As the Dash 9 was a NS, I decided to buy one of the last batches of SD45's made, a high hood NS.

I've had it for some time, but never ran it. Recently I've built up my inventory of decoders and decided it's time to get the fleet all DCC'd.

So, silly me, not taking my own advice, plugged in a QSI and immediately greeted with erratic operation. Nothing made sense, so I traced the motor and track pickup wiring of the socket itself. Really weird results. Well, miswiring of the board that has the contacts for the motor block, classic swap of a track pickup and motor lead. Works on DC because they are shorted together. There were even more wiring errors. See the SD45 wiring errors page.

OK, so got it somewhat running, and the locomotive derails on my level inner loop. Ahh, axles new, don't slide side to side, inner loop is 10' diameter. Heavy gear oil (Hob-E-Lube) on the axles. OK better.

Now what? Some more derailments and I decide to follow up on the weight situation, I know more weight helps, and I had a set of the real lead weights. Put all 3 in, adding 4 pounds, yes tracks better but still a derailment.

I suspected this from the beginning, bad back to back. I had a wide radius switch with the shim on the guard rail, and the narrow back to back was making the axle jump up as it goes through. Wheels out of gauge! Since these are "D cut" wheels, you can adjust them. Too wide, grind off the tip of the axle, too narrow, add a washer between the axle end and the wheel.

I eventually swapped out the trucks for a couple that had the short-lived Aristo SS wheels since one of the motors burned out. I may go back to the "D cut" trucks later. Before I do that, I will measure the flange thickness and cut that down if too thick, and then set the back to back (and then the gauge will automatically be right).

Here are some pictures from Ted Doskaris.

The picture below shows the SD45 with the side and end railings attached (you have to attach them yourself):

The long hood head light is illuminated in this operational condition but, the classification lights on either side of it are actually not illuminated even though they appear to be - apparently due to their clear lenses scattering the head light flux from within the shell of the loco.

The same loco decoupled from the train is also shown in the dark with long hood forward operation. The photo of this shows the illumined red classification lights as the loco's nose is pulling away from view. 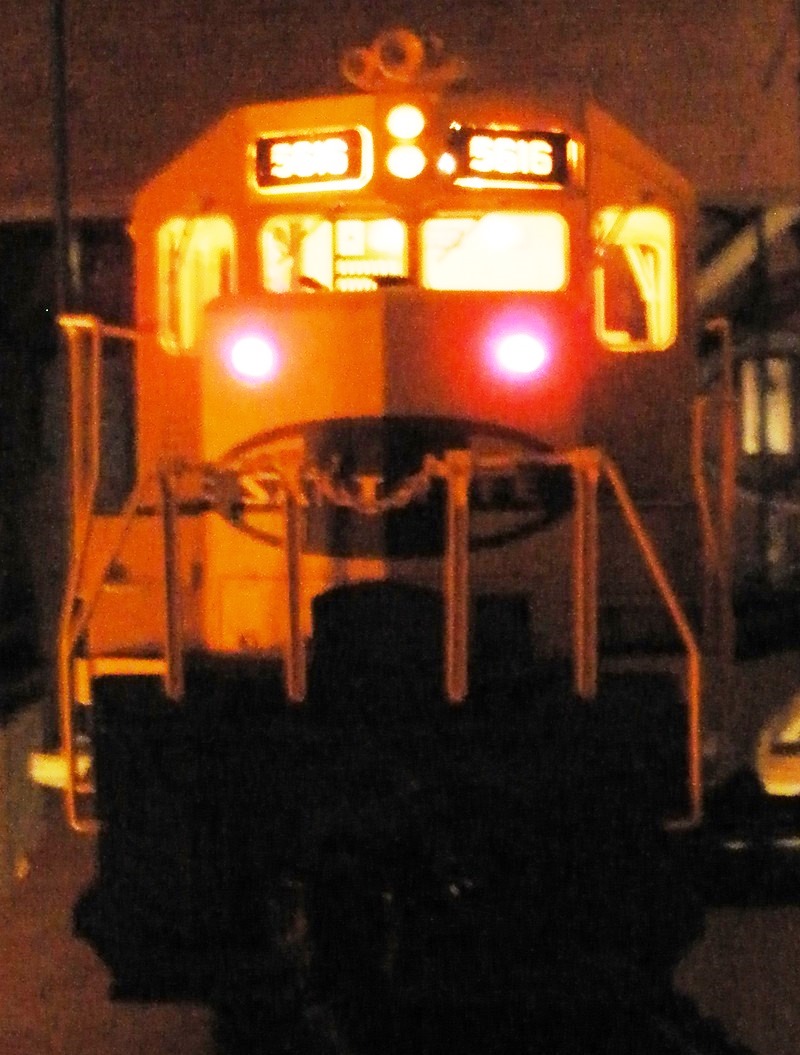 The following picture is of he same loco view as above but shown with under house lights on: (Note the angle at which the red illuminated classifications lights are observed at is significant as far as noticing the intensity of the red illumination. In fact, if viewed from an extreme angle, the emitted light may appear to be white or off.) 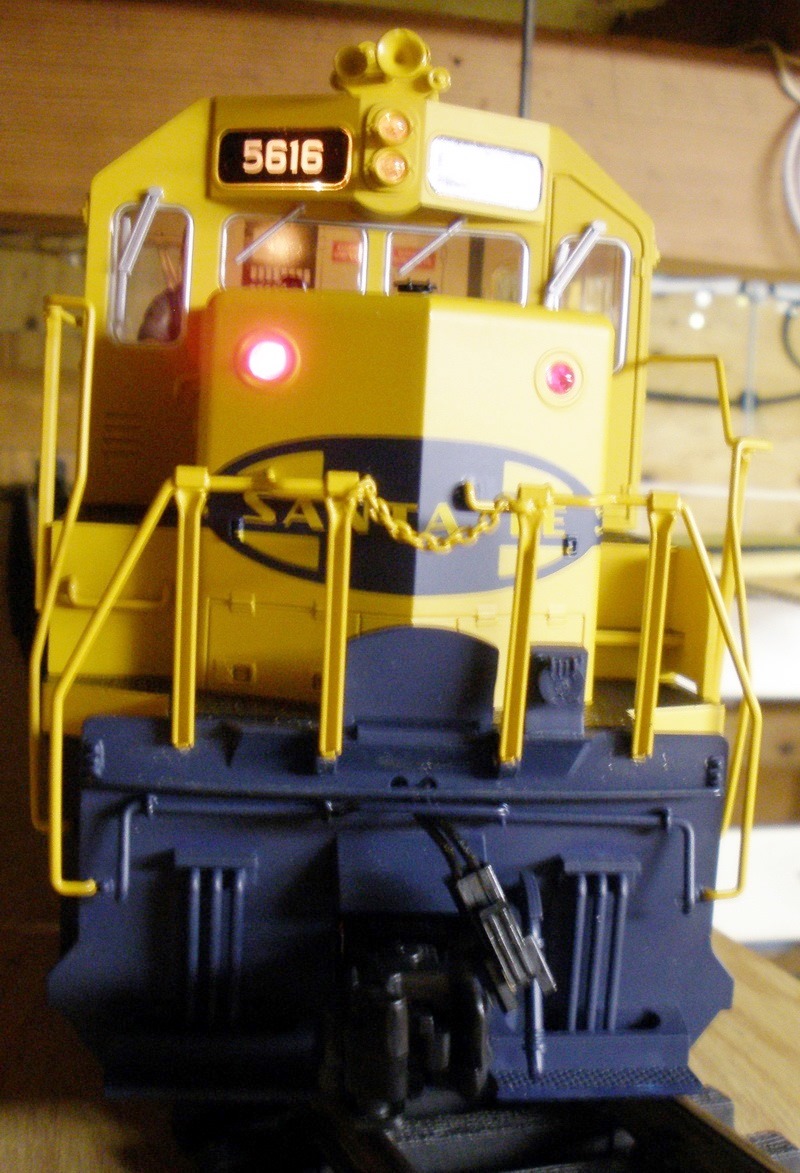 The following is the same loco view, but now with short hood forward operation with the picture taken in the dark: (Note the head light is illuminated and the classification lights are not illuminated as they ppear dark.) 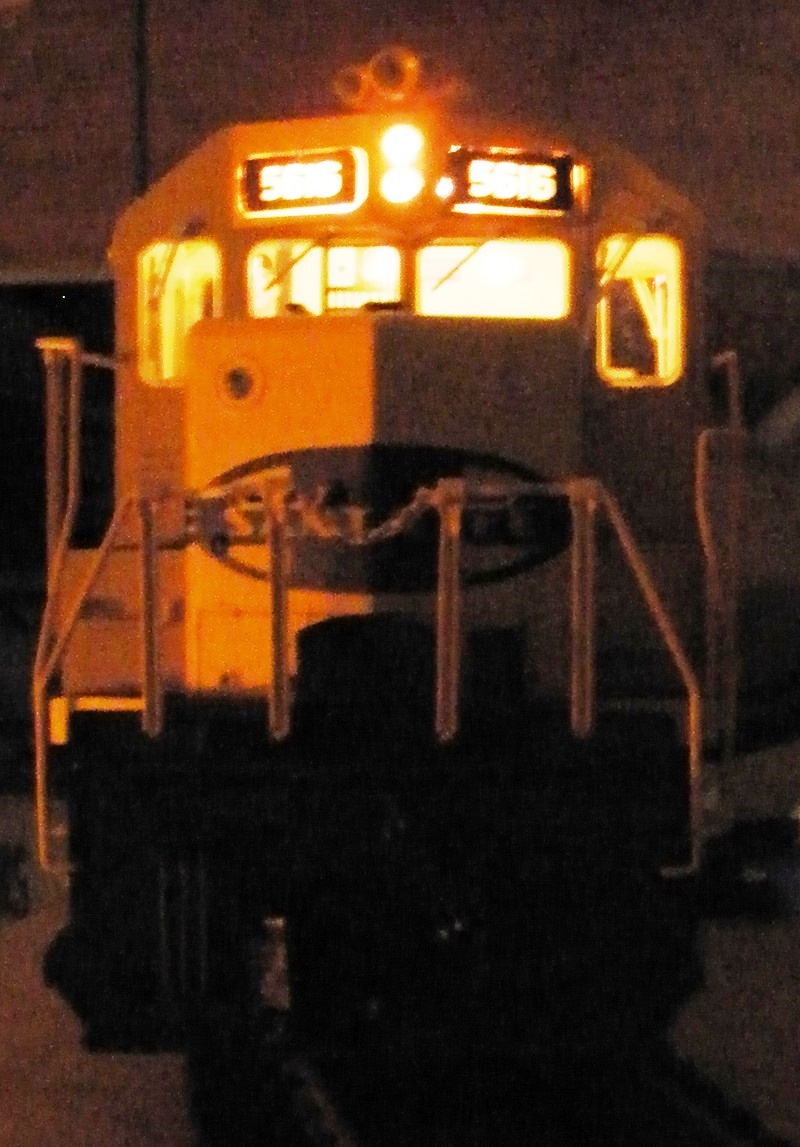 The following is the same loco view with short hood forward operation but with picture taken with under house lights on: (Note the head light
is illuminated and the classification lights are not illuminated as they appear clear.) 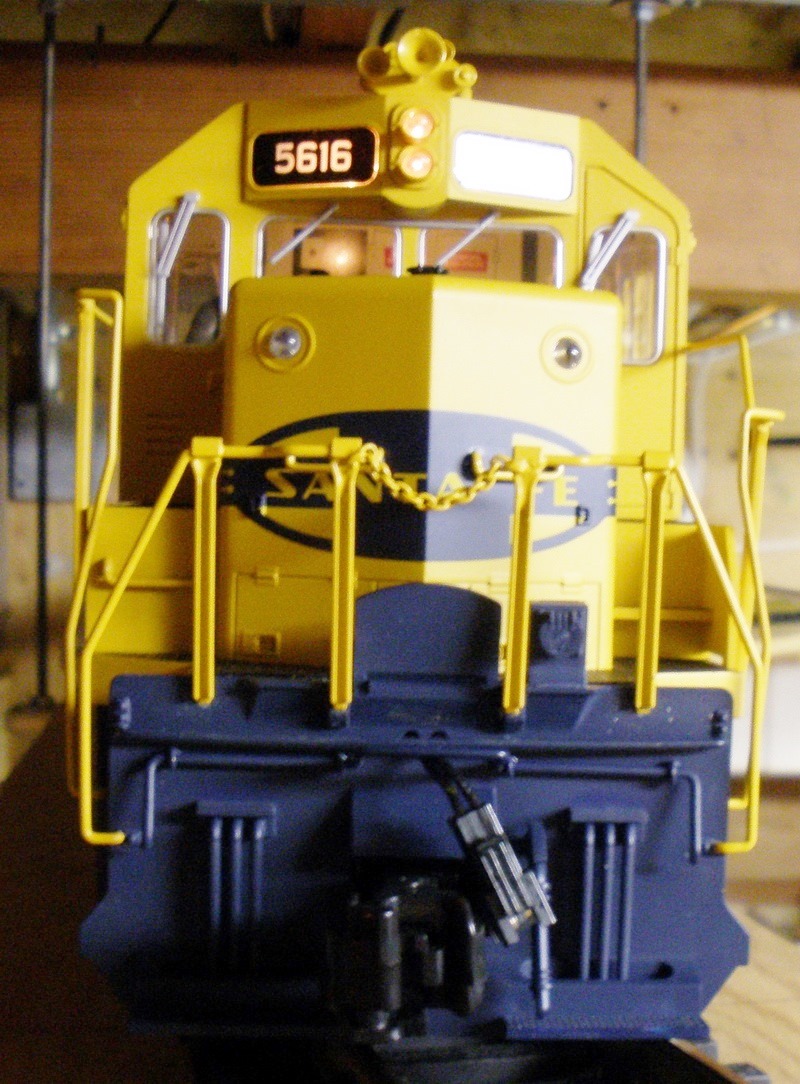 Comment from Ted: "unlike what I had previously thought about the illuminating lights showing through the painted plastic ends of a loco - the above pictures
do not indicate this condition. The reflecting classification lights on trailing loco's end seems to make it appear that light is being seen through the painted finish.

The SD 45 has 10 screws holding the hoods and cab to the chassis, they are self tapping screws 2.57 mm over the threads and 7.8mm thread length. On the chassis, these 10 holes are  clearly marked with arrows except for 2 that are under the cab, near the edge of the chassis.

In the picture below, you see the whole unit disassembled. You can see the main board up in the center of the shell, the smoke unit to the left and the speaker to the right.

The chassis consists of a piece of "C" shaped channel, most likely for strength. This is probably the reason the main board is at top, along with the fact that the slide switches can be on the same board, saving the cost of a separate switch board.

In the picture below is shown the nose / short hood from the inside, (remember that this is with the shell upside down)You can see an incandescent bulb for the porch light at the top, and two classification lights below (waiting on Ted to tell me what these are) 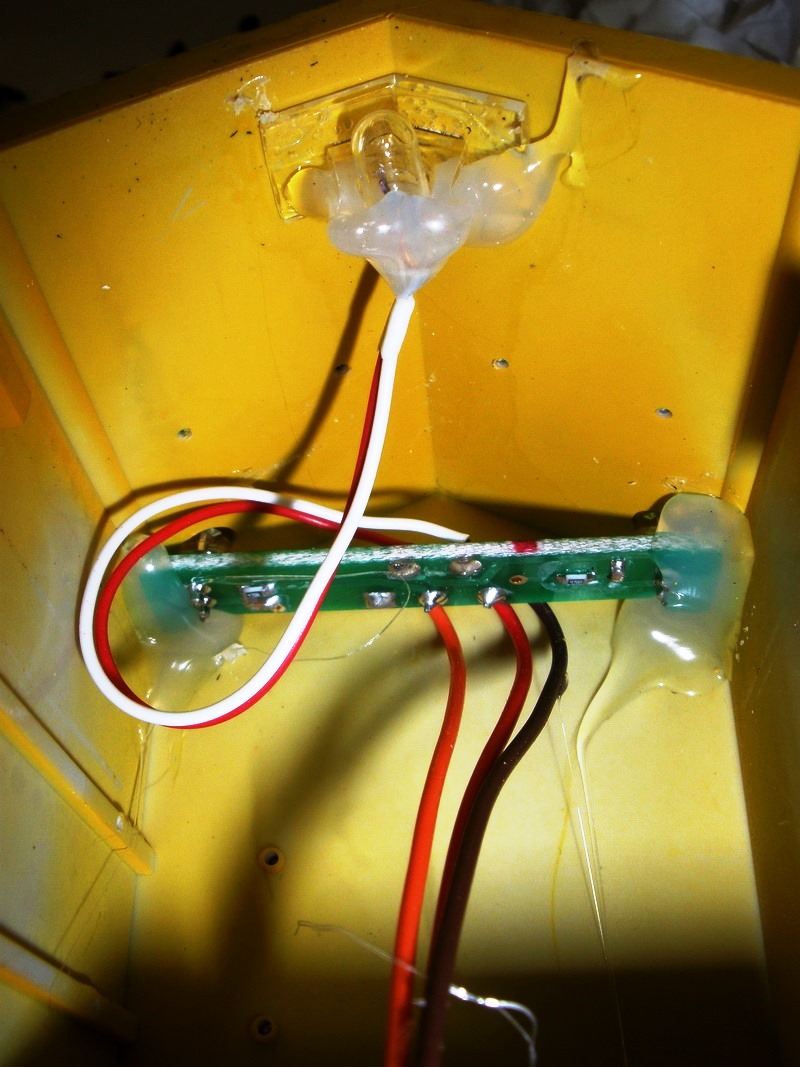 In the picture below you see the "long end" of the loco. The porch light is just out of the picture at the top with the red and white wires.

The single bulb hanging in the air is to illuminate the number boards below. Many people have changed to 2 leds one directly behind each number board. Better lighting and the incandescent bulb often "bled through" the actual shell.

At the very bottom of the picture you can also see on edge of the speaker. 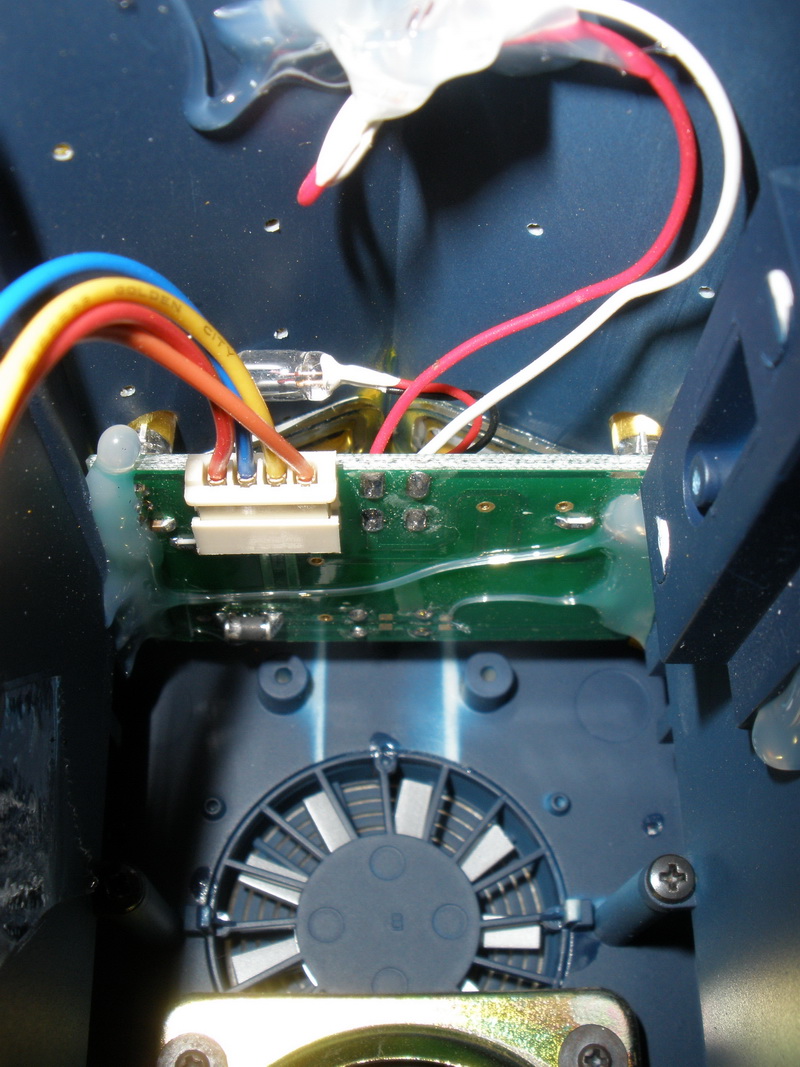 So this wiring leads to the main board, attached to the underside of the top of the shell.

The picture below shows the contacts of the 4 switches (in the center, 6"solder blobs" each.

To the left of these is the shorting plug, long and thin, you can just make out "PCB02". This basically connects the track pickups to the motor and also connects track power to the smoke unit and lights. At the top you can see "J1" on the main board. The "other half" of the Aristo socket is the black socket to the right. This connector usually has no circuits connected to it. The words DCC J2 are partially obscured at the top right.

At the top left are the power leads to the smoke unit.

The only weird thing (my opinion) is the small daughter board soldered at right angles to the main board at extreme left.

What the heck is it? 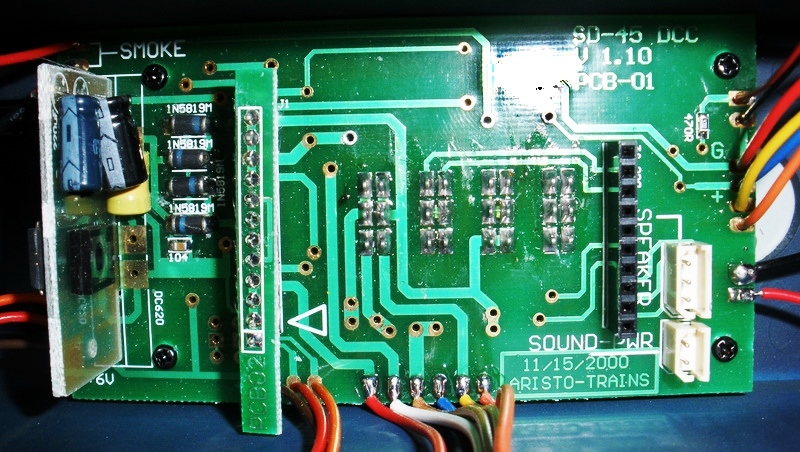 The picture below is a better view of the "right side" of this board. It shows some filter caps, a small transistor, a larger transistor, and an inductor (yellow).

You can also see the J1 and J2 silkscreen identifiers more clearly.

But back to this daughter board, the only clue is the "OUT" by the power transistor. 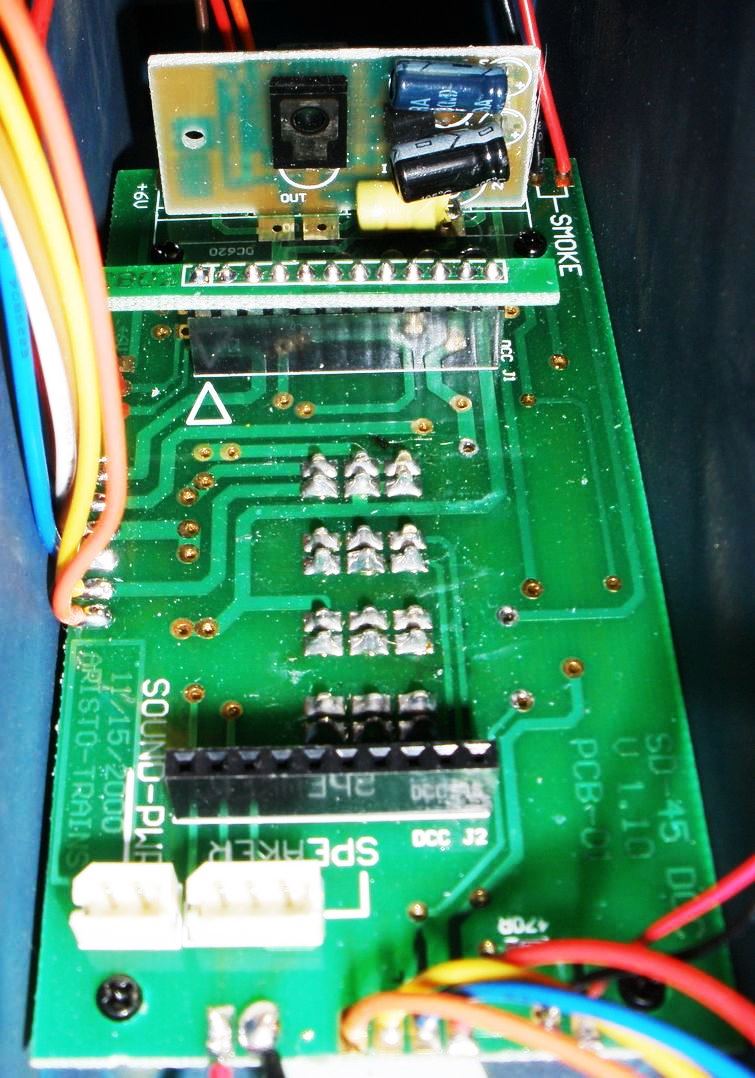 So wha's on the other side? Ah hah! The famous Aristo PIC processor, used, as in the smoke unit, a voltage regulator. 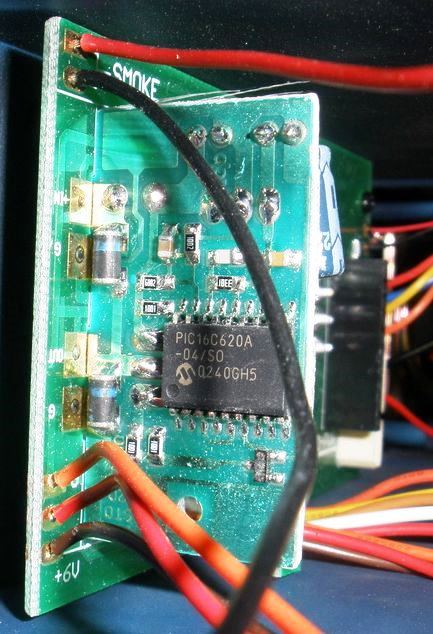 This is commonly used by Aristo. Apparently using the pic and PWM to the lights is cheaper than a 3 terminal regulator and heat sink. Unfortunately, many R/C manufacturers will swear that the electrical "hash" caused by the rapid switching on and off of the power transistor creates RFI, and the SD45 is famous because the board is up in the top of the loco where they want to put the antenna. "Another fine mess you've gotten me into".

Subsequent locomotives indeed use a 3 terminal regulator, screwed to the middle of the 3 mounting holes that hold weights.