The American Main Line (AML) 1/29 scale model is of the prototype Gundersen 50 foot Extended Height box car prevalent since the early 1990s. (Such cars were marked with a white band at the top of their end bulkheads.) The car is an external rib type with a single plug door molded into each side - hence, the doors are not operational. The car color appears to be embedded within the plastic since light can shine through the sides! 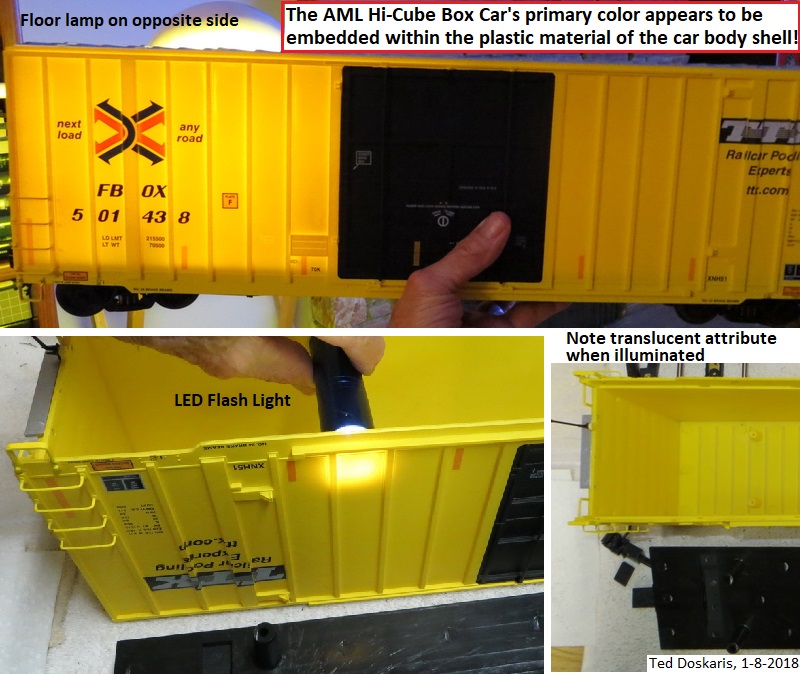 If found to be objectionable by some folks, I would think cardboard could be use to line the interior to arrest light transmission. A warranty card is included in each box 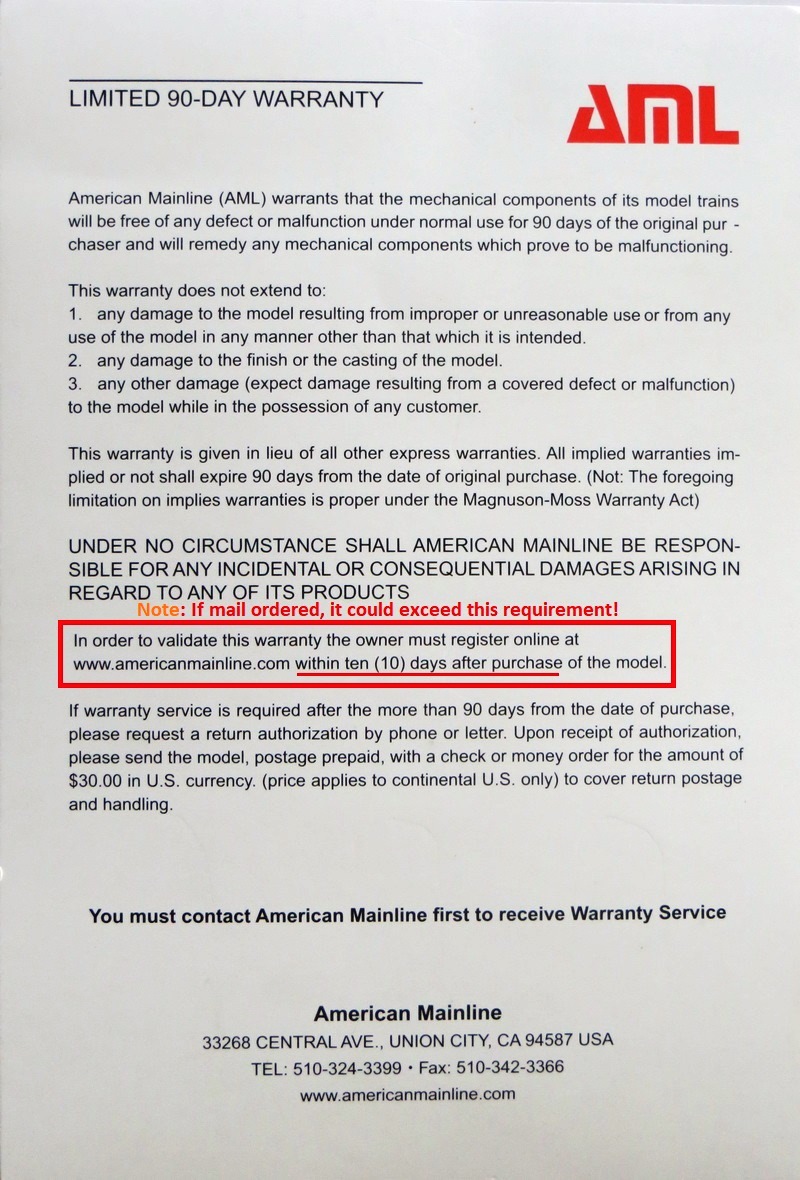 If concerned about the warranty, AML had advised to write down the relevant car information on the card and "snail mail" it to AML in Union City, CA since on-line registration failed to work at the time I attempted to use it. If exercising this recourse, it's prudent to contact them first.

Cars are factory equipped with truck mount AML knuckle couplers that are low to the railhead. (A Kadee 880 gauge is shown for reference.) However, Hook & Loops for truck mount and AML's proprietary body mount knuckle couplers are included should the user choose to install these. 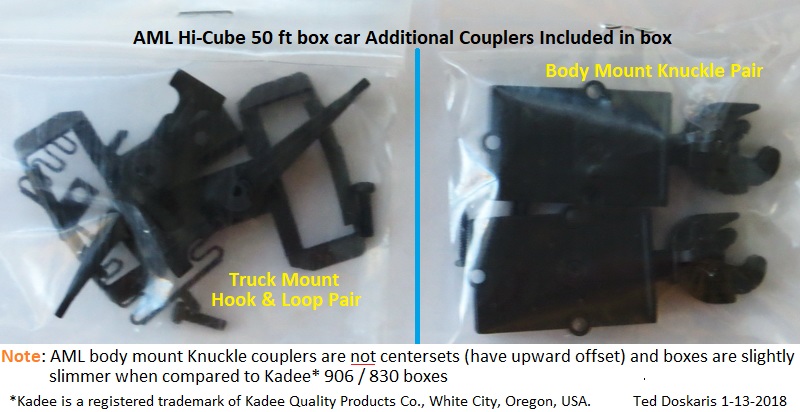 Trucks are AML's emulated roller bearing types that are also used on other AML modern type cars but now have brake shoes that no longer rub on the wheel flanges. That said, the trucks still suffer from operational drag because of pigeon toed side frames. 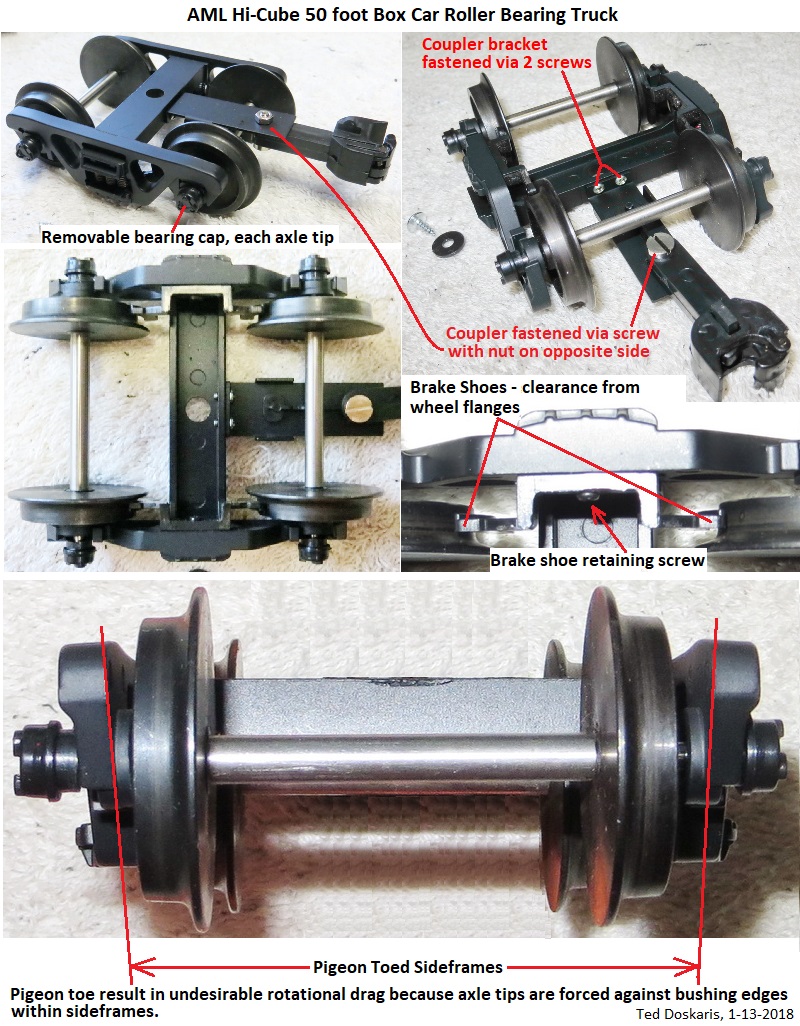 Shown below is the Burlington Northern car in green livery as received out of the box. Shown below is the Wisconsin Central car as received out of the box.

The brake hose at each end of the car is somewhat vulnerable to breakage, particularly when attempting to put the car back in its box, but it can be repaired as shown with the Wisconsin Central car. 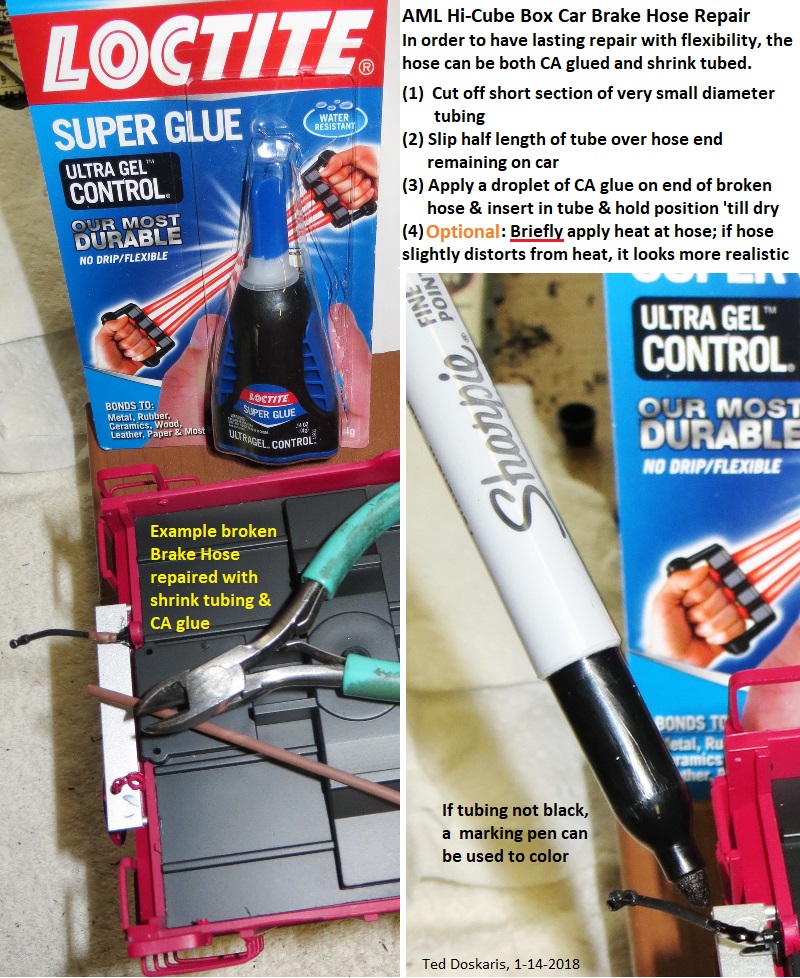 Caution: If using heat gun to shrink the tubing, only briefly apply heat or risk damage to surroundings.

Shown below is the Southern Pacific car as received out of the box. 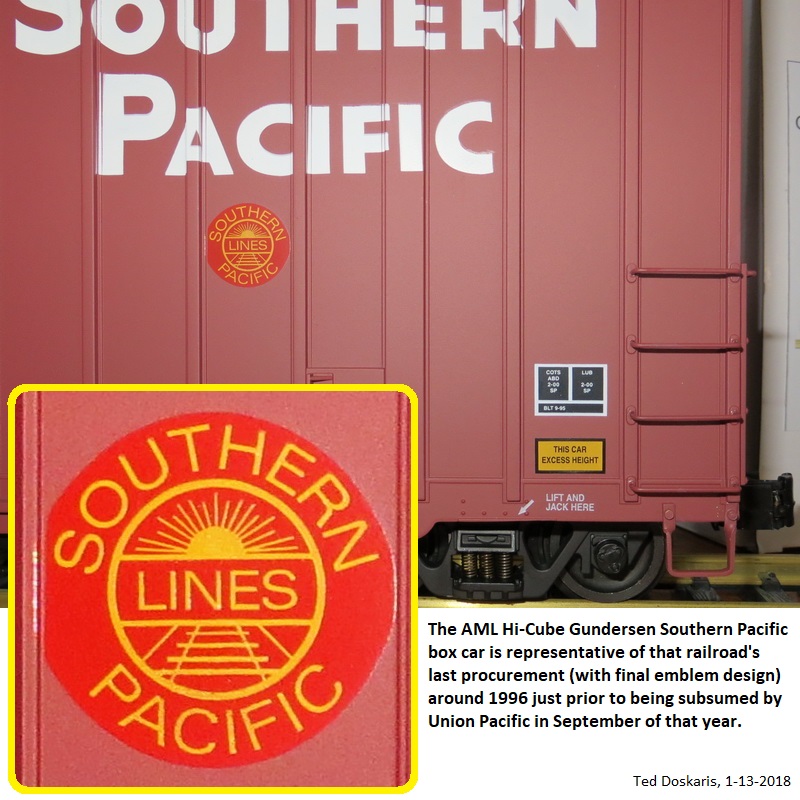 Shown below is the TTX car as received out of the box - the car exemplified for installing Kadee 907s. The prototype Hi-Cube Gundersen cars can have different type draft gear boxes (some of which protrude more so than others) depending on the cushion system employed. I chose to emulate the less obtrusive type in which to emulate by body mounting Kadee 907s. 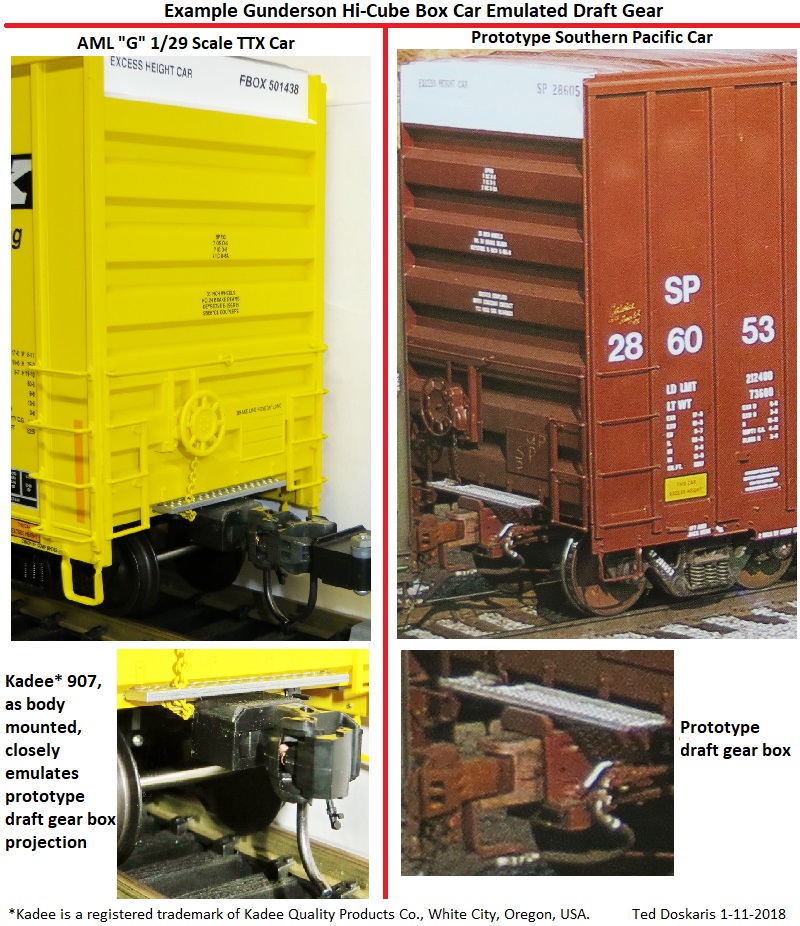 Described is an example TTX car fitted with Kadee 907 centerset couplers as body mounts, albeit with slight modifications.

The car floor pad is intended for body mounting the AML coupler (similar looking to a Kadee 906). However, the AML coupler has an upward offset, whereas, the Kadee coupler is centerset.  Also, the AML box is thinner than the Kadee box. 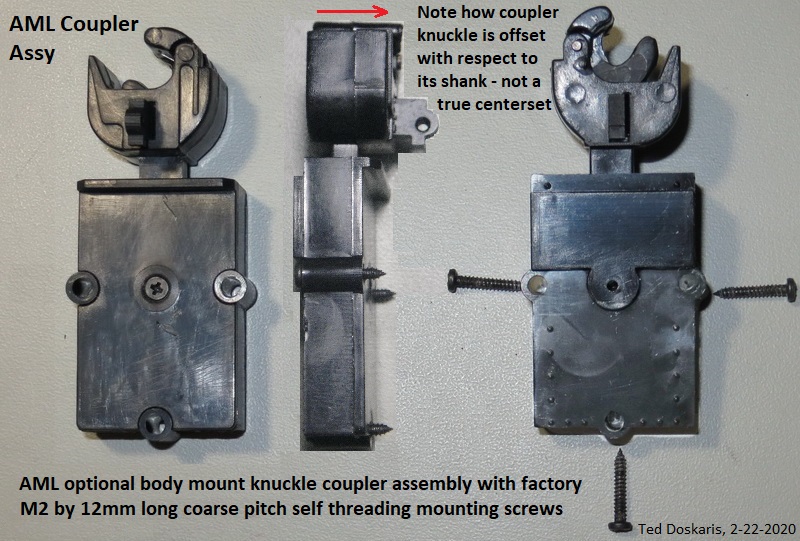 This means the pad is a bit too close to the railhead when mounting a Kadee centerset type coupler - whether it be the large foot print 906 or smaller foot print 907. (The 907 is intended by Kadee to be truck mount, but it can be used for body mount, too.) 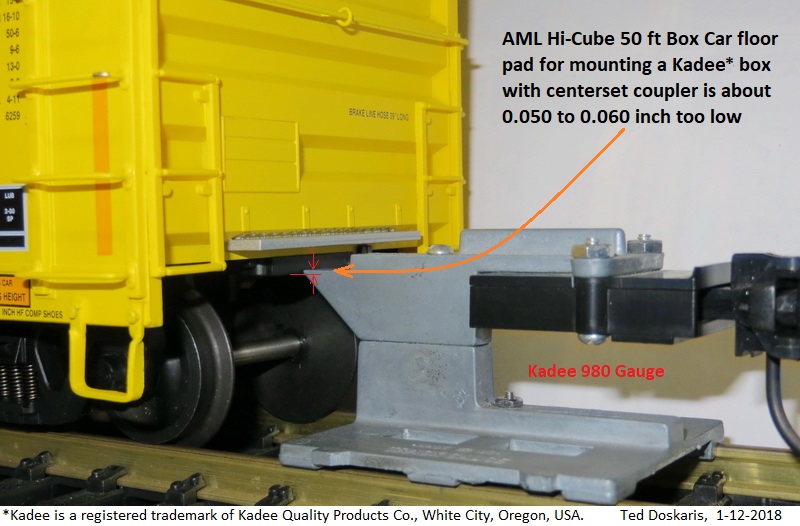 To compensate for the too low to railhead proximity, the Kadee 907 box tail is slightly modified by trimming down its "rails" as illustrated below.  The modification further serves to "lock-in" the coupler box when it's mounted on the floor pad with only one screw. 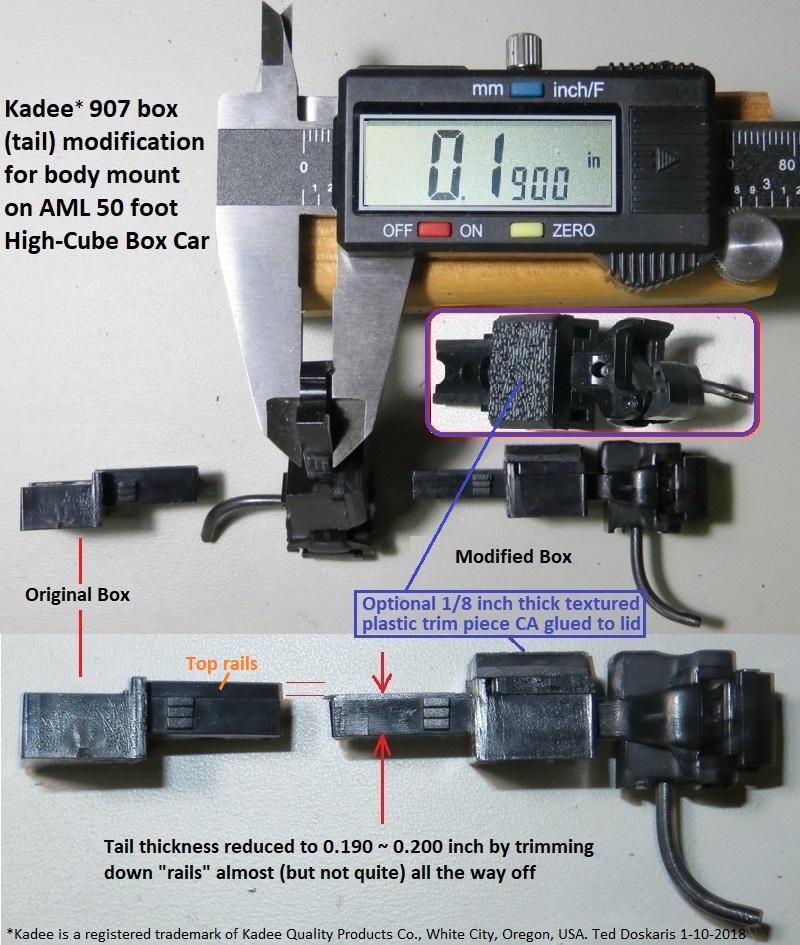 The floor pad is about 1/8 inch thick where the tail of the 907 would fasten. This might be marginally OK for threading a screw to fasten the Kadee 907 coupler box tail, but I chose to reinforced it. If choosing to do this, the floor must be removed.

The trucks are to be removed first.
The car floor is held in place by 6 long screws (3 each side) as illustrated below.

An optional plug is utilized to reinforce the floor pad to provide a thick surface for threading a long screw. Since a single screw is used to fasten the coupler box at its tail, the screw can then be firmly torqued without risk of stripping out the threads from the car floor. 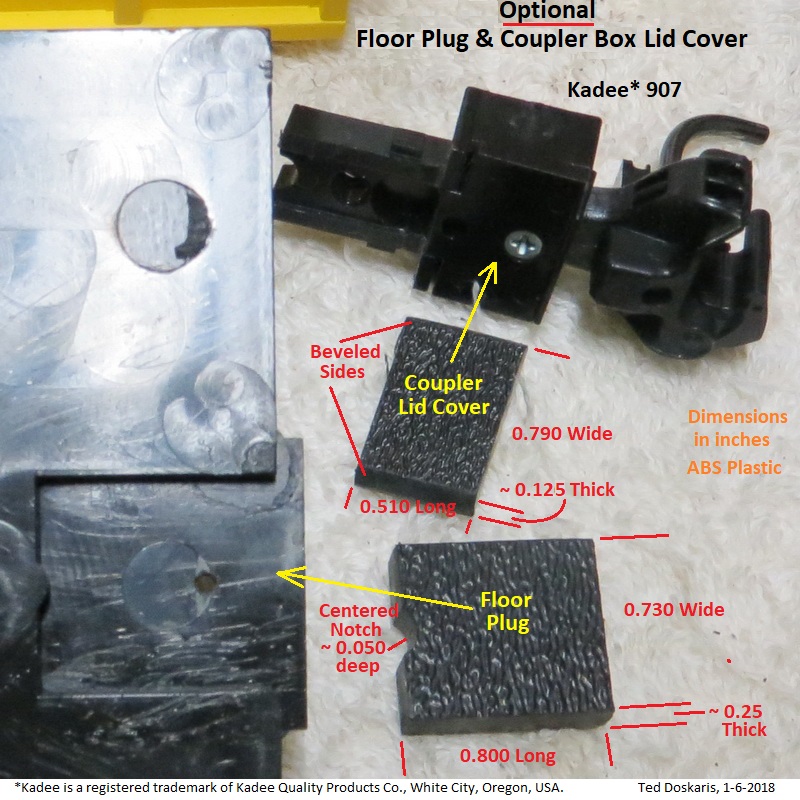 For cosmetic purpose, an optional decorative cover can be glued to the lid of the coupler box. 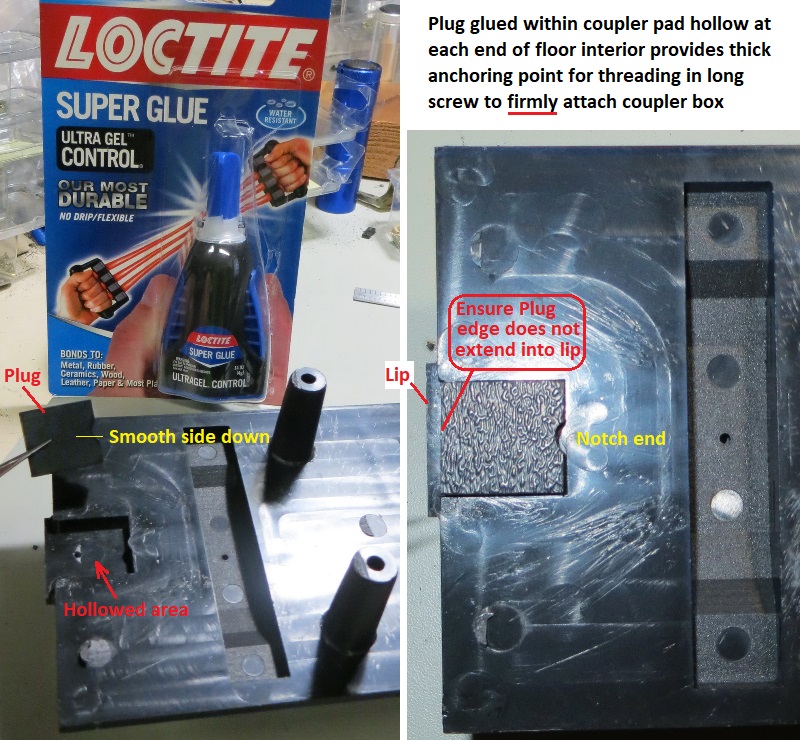 I prefer to use a #2-56 machine screw to mount a Kadee box. (Kadee formally supplied such screws with the kit but since switched to #4 self threading types that resemble wood screws.)
No matter, a new hole is to be located as illustrated below. 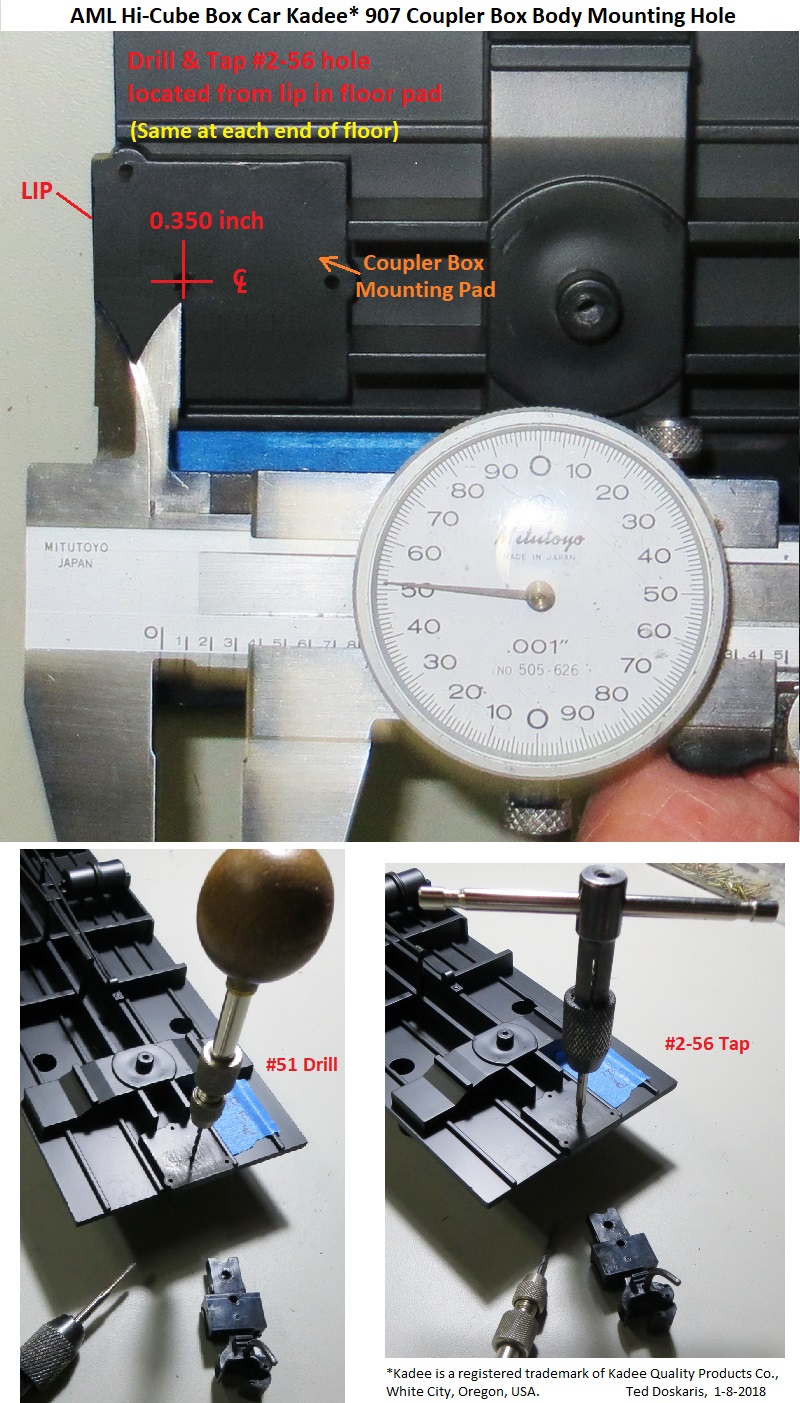 Illustrated below are coupler box and truck installation.
Note: Trucks must have their factory mounted bracket with coupler removed before reinstalling them. It's also timely to correct the trucks' pigeon toe problem. 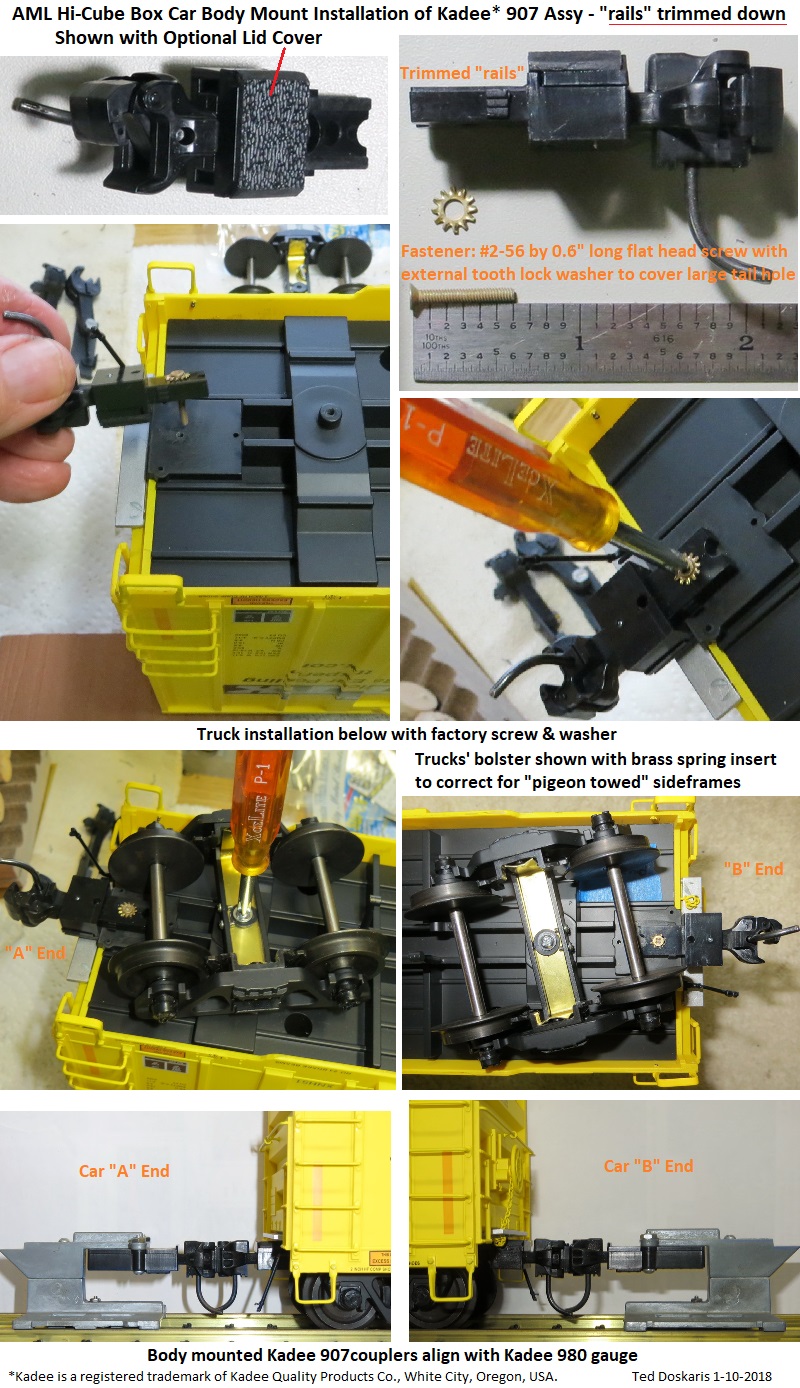 Note: The couplers should align with the Kadee gauge. If not, leveling shims provided in the Kadee 907 kit capsule may be used - or - remove coupler assembly from floor and trim tail "rails" when appropriate.

The weight of the factory equipped car with truck mount couplers is illustrated below. 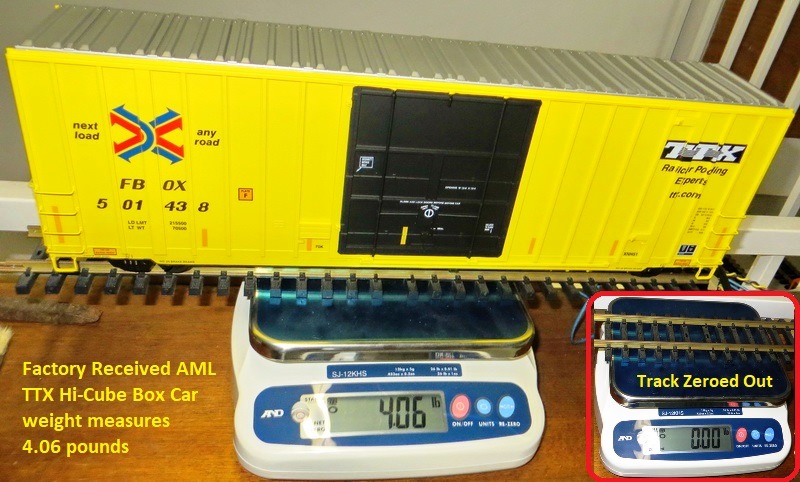 The weight of the car now with body mounted Kadee 907s is illustrated below - not much different. 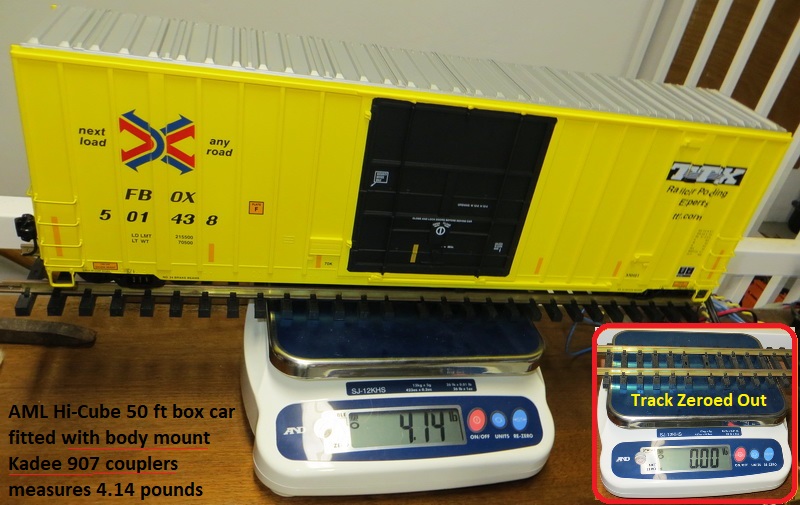 Operation is OK down to 8 foot diameter track, however, on a layout having "S" bends, a straight track section the length of the longest car should be used between the diverging transitions.

As an alternative to modifying Kadee 907 coupler boxes to allow for centerset couplers, a 3-D printed plastic resin CamPac BoxTM which accepts the Kadee 907 kit's centerset coupler, springs and lid is available - illustrated below. These boxes were designed by me (Ted Doskaris) in concert with Colin Camarillo who has the software expertise and 3-D printer in which to implement them. If wishing to obtain CamPac BoxesTM, Contact Colin via his website.

Illustrated below is an example car so equipped. 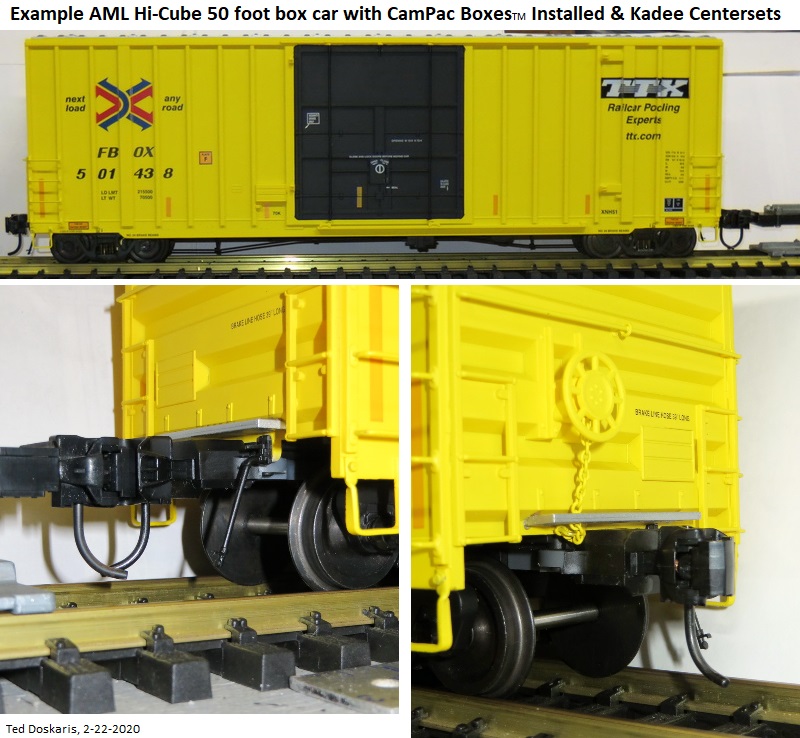 The installation process is described within the below illustration: