Most people from smaller scales will naturally express curves in radius.

Well, LGB, who basically "started" Large Scale, uses diameter, for what reason, people can only speculate. (Probably to know what space a simple loop would occupy, since space is ALWAYS an issue especially in Europe where this started.)

LGB also expressed it's diameters as "R" curves (could it be more confusing)?"  ( why not D? maybe because word for radius can begin with D?)

The table below shows some helpful measurements, and the measurement of a curve is from the center line of the curve/track.

Note: you will see different numbers for some of the "R" values on other sites. I went to a lot of trouble to try to get to the bottom of this, and have the LGB numbers from LGB. People will often round R2 to 1500, and R3 to 2400, and R5 to 4800, but the reason these numbers are "weird" is because of the geometry to get them to all work together for parallel curved tracks, etc.

Note: Tom Trigg indicates that at one time there was an R4 turnout which was also supplied with a single piece of curved track as a "parallel track" adapter. Maybe in the early 80's.

ALL the LGB switches are "curved" meaning that the rails beyond the frog are curved not straight as in a prototype switch.

They are all "flange bearing" frogs. This means the flange rides on the bottom of the flangeway as it goes through the frog. This works fine if all your flanges are the same depth as LGB flanges, i.e. 3 mm, but anything less means your wheels will try to run on the wing rails and frog (as in the prototype) and you may experience reliability problems.

Many manufacturers did this to match their curved track, especially with the ultra-sharp curves made initially.

The equivalent "frog number" of various LGB switches listed above are close approximations. 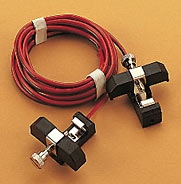 LGB also made some nickel plated brass track, but it was not popular, there were quality control issues, some of the plating peeled off, and some people apparently ground through it with a stalled LGB track cleaning loco.

In addition, a little-known fact is that for a short time, LGB made chrome plated aluminum track, available in a starter set and not intended for outdoor use: