Shown below is the USA Trains Woodside Reefer, P/N R16342, Moosehead Ale (aka Billboard Beer Car) as received out of box. The car is factory fitted with truck mounted hook & loop couplers and plastic wheels. Shown below is the completed car after fitted with body mount Kadee 789s. The car is also fitted with USA Trains metal wheels. Targeted car operation is on 8 foot or greater diameter track. To date, I do not own USA Trains American Series cars. The car described in this vignette (article) belongs to friend, Colin Camarillo (2017 - 2018 President of the Bay Area Garden Railway Society - BAGRS). Colin had asked me to see what I could do in the way of body mount Kadees to his Woodside Reefer car - whilst keeping in mind the car is to operate on some of his 8 foot diameter tack curves.

What's in the Box

According to the box label and molded in script on the underside of the car body, this car is actually made in United States of America (USA)! 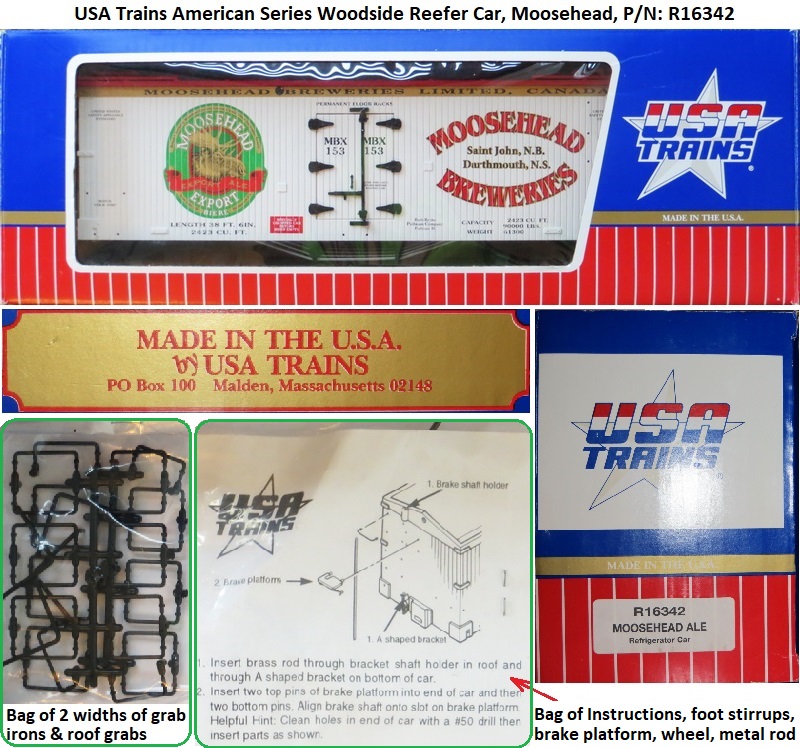 A closer view of the parts bags is shown below. 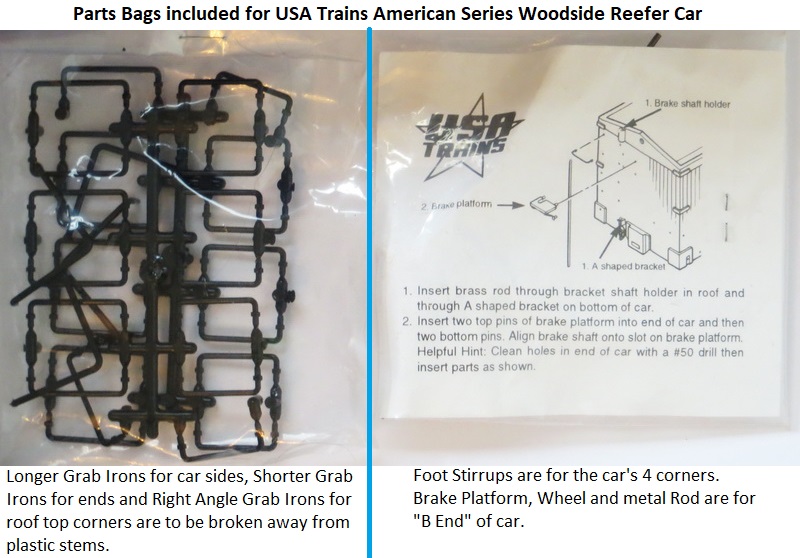 Note the USA Trains instructions on the sheet at the right side.

When compared to prototypes, the reefer car is somewhat a scale dilemma (likely box car & others in the American Series, too). With respect to its appearance along with its dimensions, it's conceivable the car could be utilized in consists for both standard gauge (1/29 scale) and narrow gauge (1/24 or 1/22.5 scales). In this regard exactness for any scale may not satisfy the purist, but appearance would be better than the so called "10 foot rule".

Based on examination of many books, the USAT car seems to closely replicate a prototype standard gauge car, circa 1890s ~ 1915. These cars typically had a length of 30 to 36 feet with truss rod underbelly having air brakes, archbar trucks and small knuckle couplers. The USAT car also has a brakeman platform with horizontal brake wheel positioned not much above the car roof top - similar to a prototype car.

For prototype standard gauge cars and particularly narrow gauge, lacking an end brakeman platform, they typically have a much taller brake wheel shaft extending above the roof. If this is what you replicate, the USAT car brake wheel shaft could be longer. 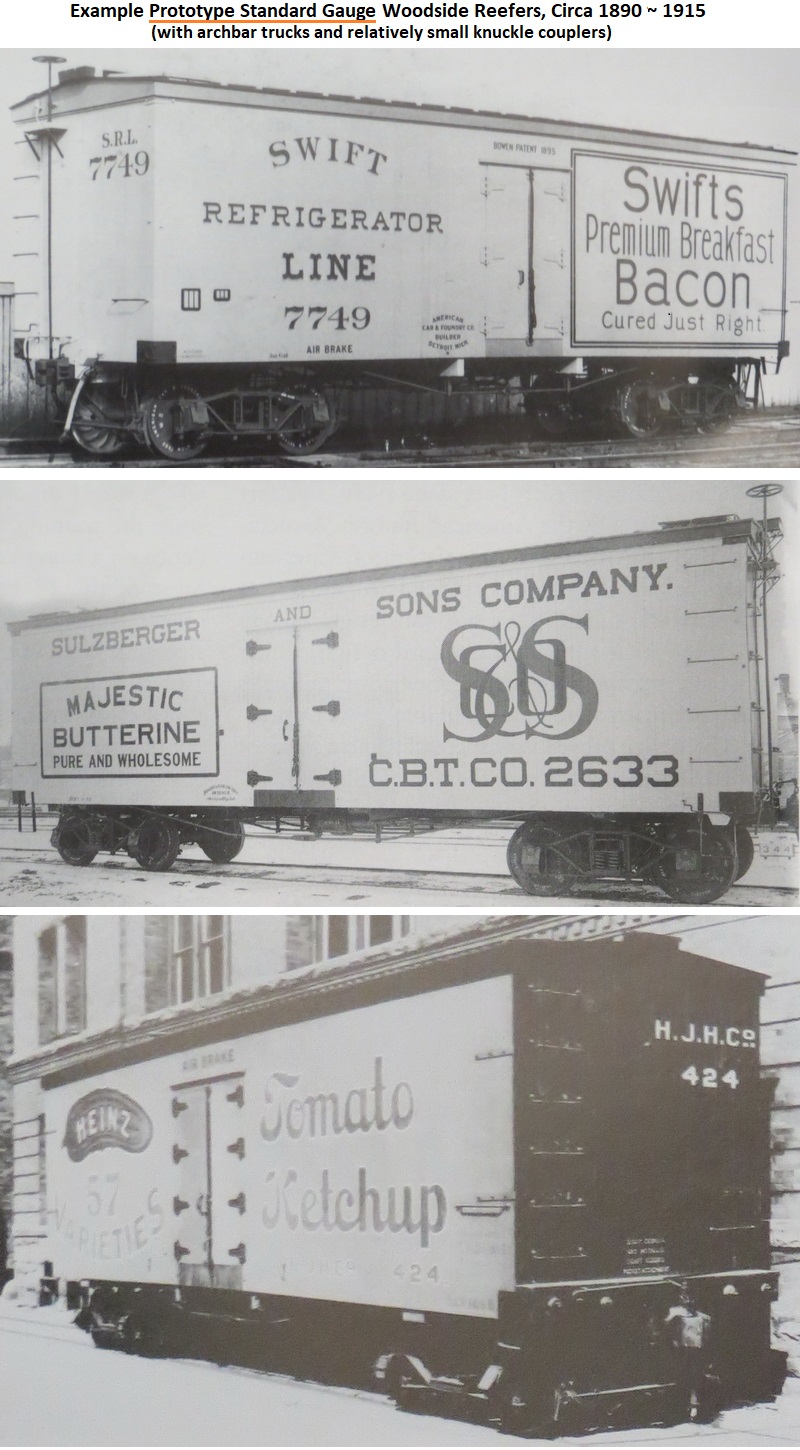 Prototype cars prevalent beyond 1915 were typically equipped with Bettendorf trucks in place of the old archbar trucks. Cars made before 1890 and sometime through the early 1890s seem to have link & pin coupling means.

Couplers for the USAT Car

The USA Trains American Series Woodside refrigerator car is to be fitted with body mounted Kadee 789 centerset couplers (having truck mount type gear boxes). These couplers are the older (with slightly smaller knuckle) that preceded the newer Kadee 907 AAR E type. The #789s are sill available and were chosen given that they are physically smaller than the newer #907s but larger than the #1 scale couplers - a nice mid size alternative whist retaining good operational tolerance on a layout.

The #789 coupler does require some minor trim owing to fitment difficulties through the car's draft gear opening, albeit enlarged but not cut off or notched open as typically done by most folks. That said, the newer #907 likely could be used in place of the #789 with some additional trim. 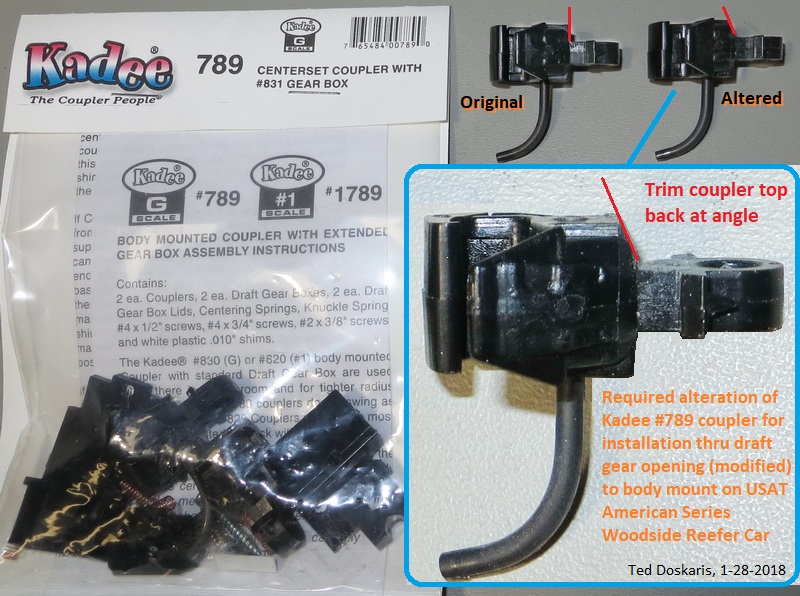 Though I chose to use Kadee "G" scale 789 centerset couplers, there are other possible large scale couplers to consider.

It is to be appreciated that the Kadee #1907 is not a true centerset coupler - having a downward offset knuckle as illustrated below. 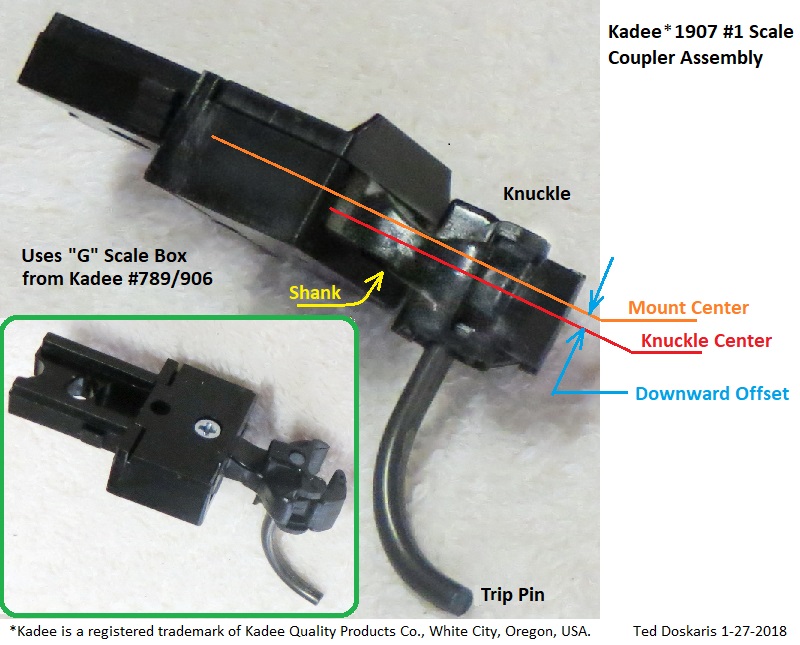 Unlike the other #1 scale couplers, the #1907 coupler utilizes the bigger #907 (831) box in which it is mounted. Its shank has a larger mounting hole diameter compared to the true centerset #1917 shank of the miniature box.

Illustrated below are comparisons of large scale #1 & "G" coupler types - all of which use the same Kadee #831 type coupler box. 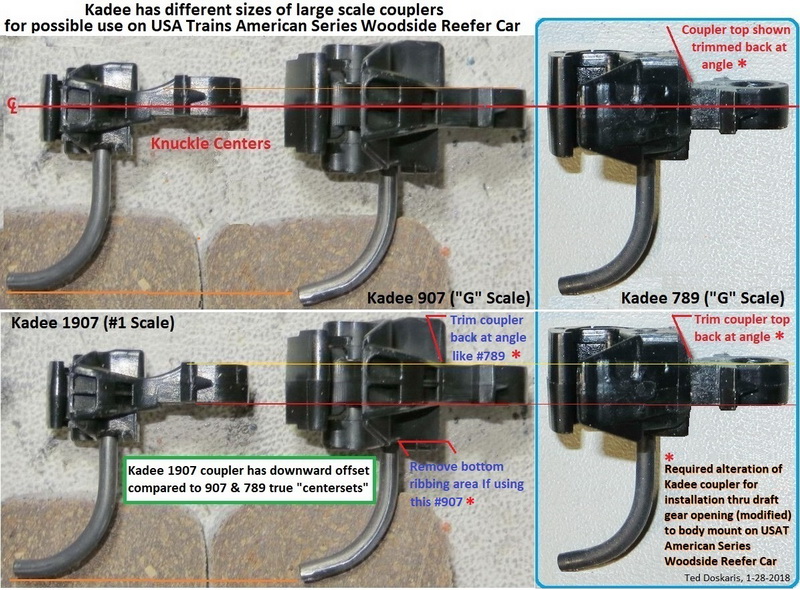 To facilitate installation of the #789 or #907 coupler, they need to be trimmed as shown above.

My choice coupler, and the subject of this article, is the Kadee #789 with modified box & lid utilizing an approach of installing the coupler shank through an enlarged / modified car draft gear opening - illustrated below. 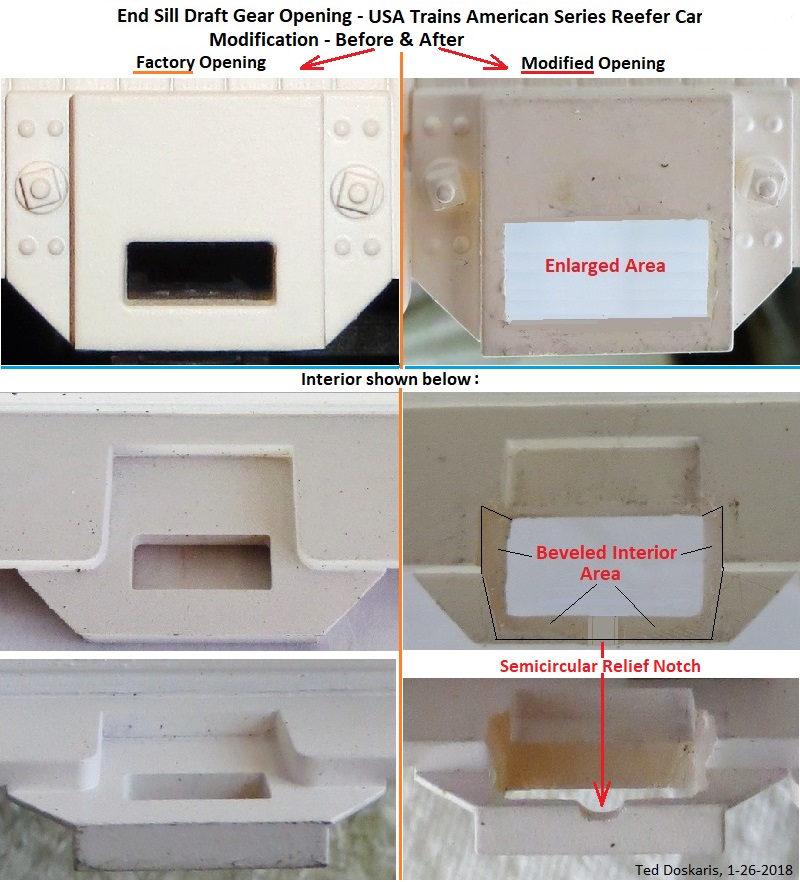 Illustrated below is the Kadee #789 with modified box & lid installed on the underside of the car.
Note that the car's end sill draft gear opening only needs to be enlarged, not cut away or "U" notched out like some prior art methods; however, the trade-off necessitates fitment finesse skills and a bit of awkward manipulation to effect installation. 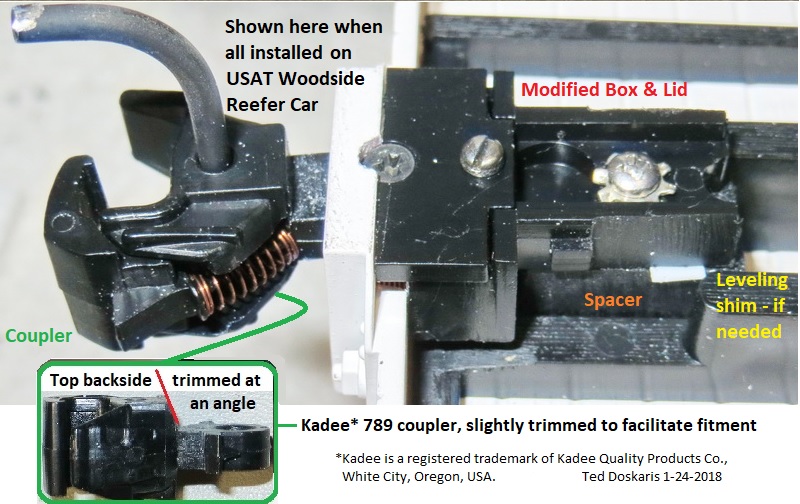 To be removed from the car body are the trucks, hook & loop couplers from the trucks, and then the underframe.
Once removed, the underframe must be beveled at both ends in order to facilitate coupler box installation and mounting as illustrated below: 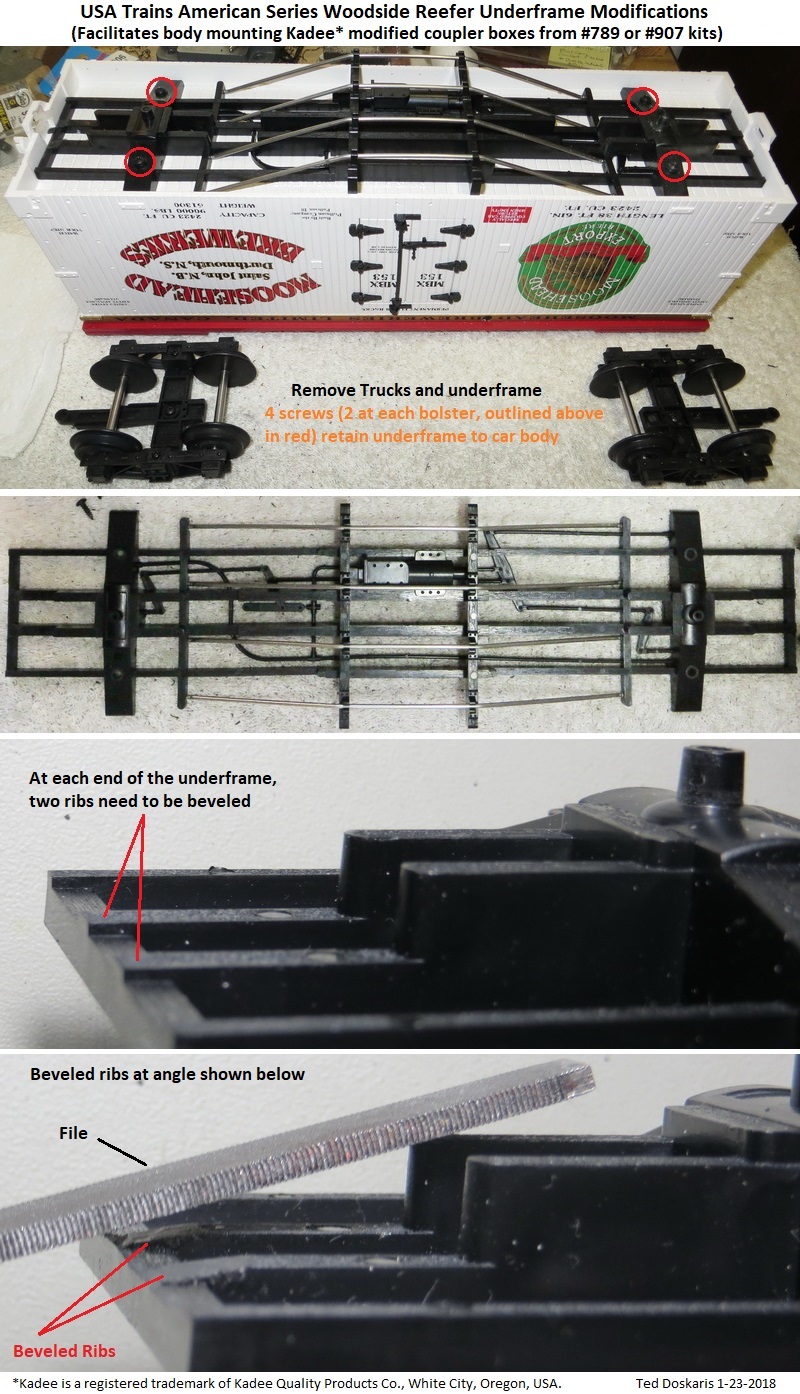 Coupler Box Mounting Holes:
The coupler boxes via spacer are to fastened on the car underside at two 0.067 inch diameter (#51 drill) holes at each end of the car - located as illustrated below 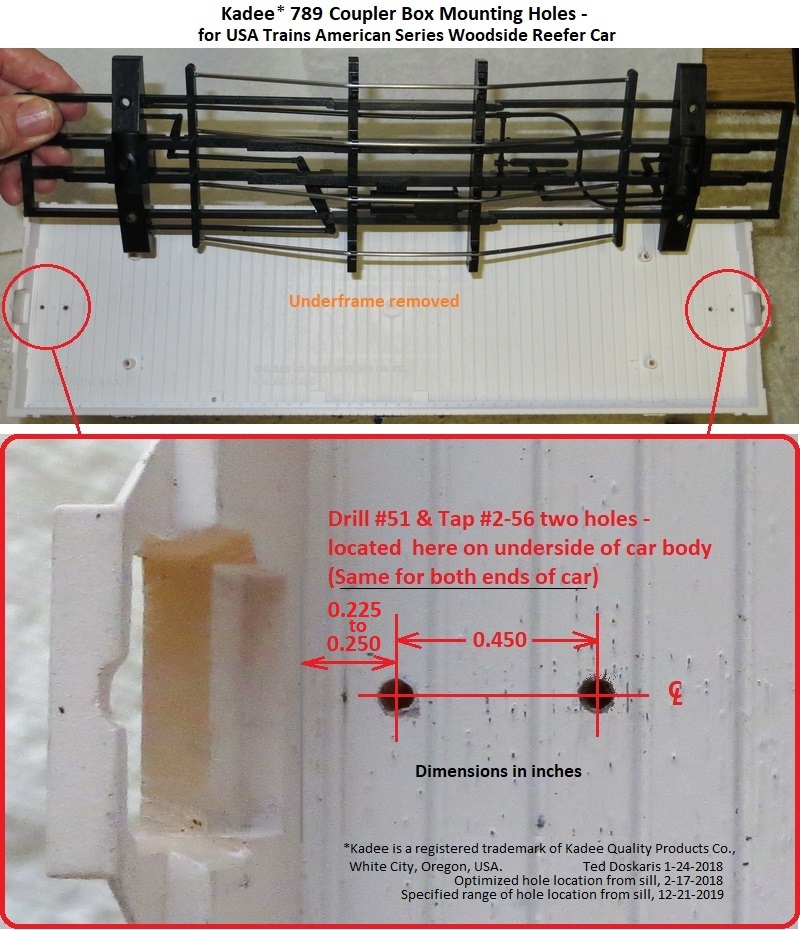 At each end of the car body, the draft gear opening is modified on both outside and inside.

Draft Gear Outside Mods:
The draft gear opening is relocated and enlarged with dimensions shown in the illustration below.

Note: The dimension for locating the enlarged opening is predicated on using USAT metal wheels.

Draft Gear Inside Mods:
Once the openings are enlarged at both ends of the car, they must be beveled on the inside to allow fitment of the coupler box- albeit modified, too - described later. 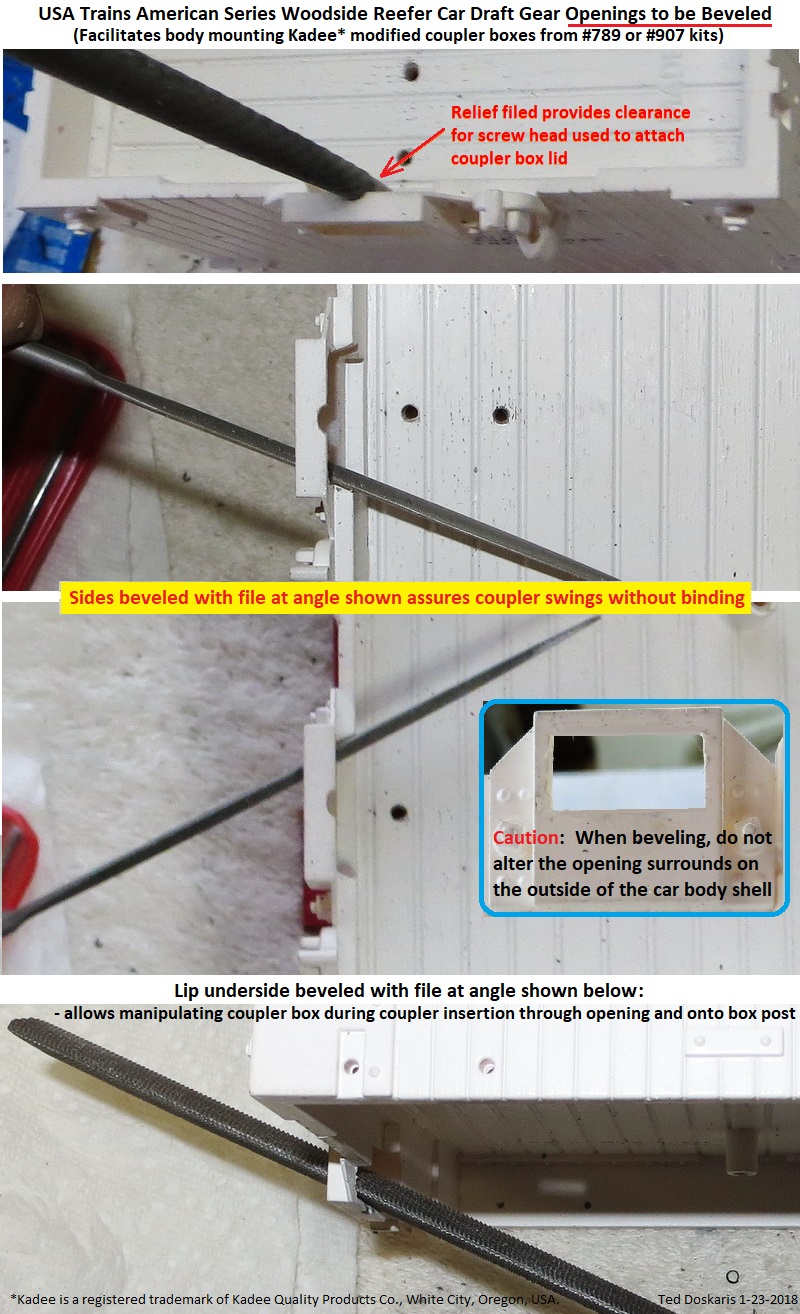 When done, it should look like that shown below:

The Kadee 789 / 907 kit's coupler box and lid are modified in order to fit within the car's end sill enlarged draft gear opening as illustrated below with dimensions. 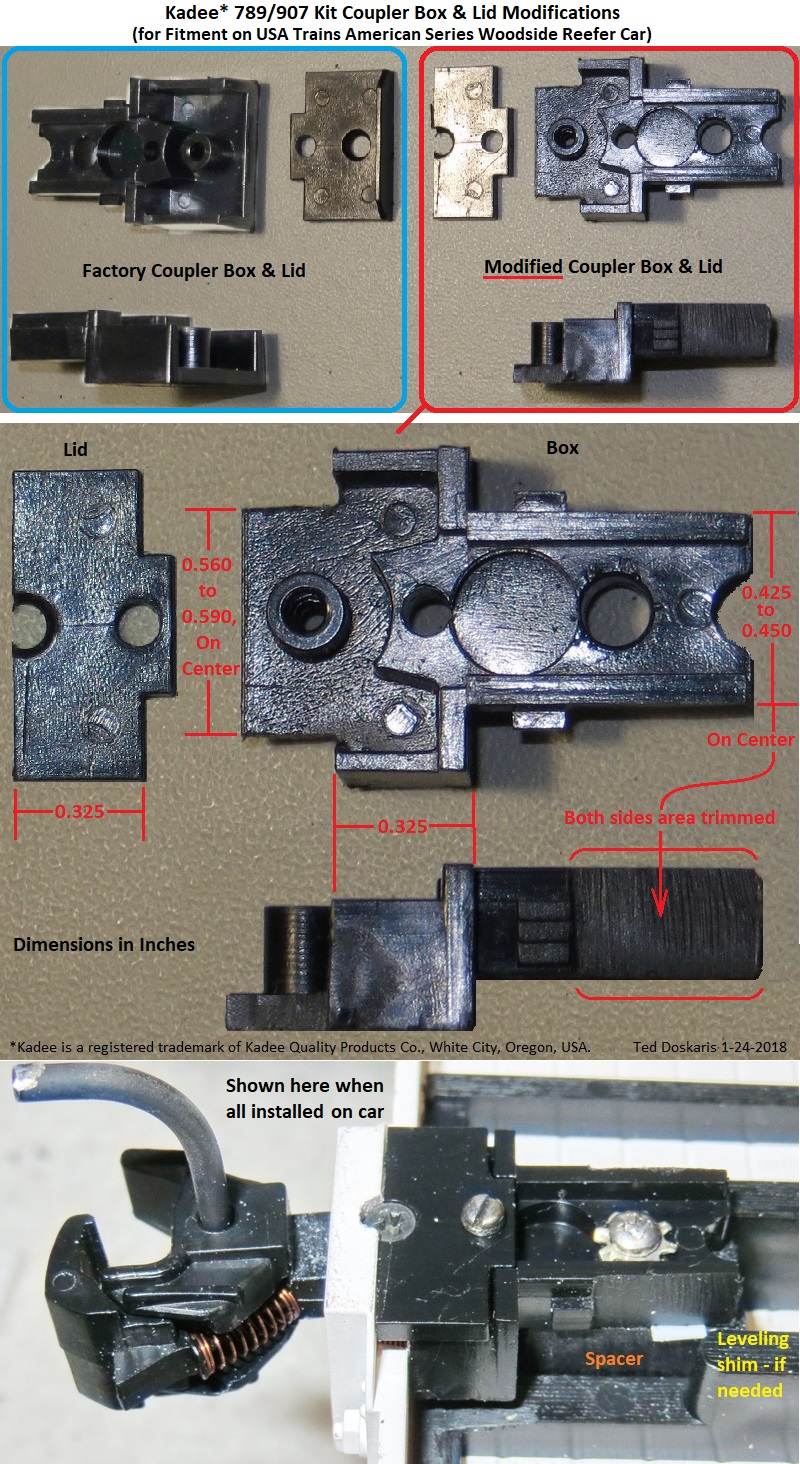 A spacer is to be tucked under the coupler box tail when mounting the box on the car. The spacer block with dimensions is illustrated below. 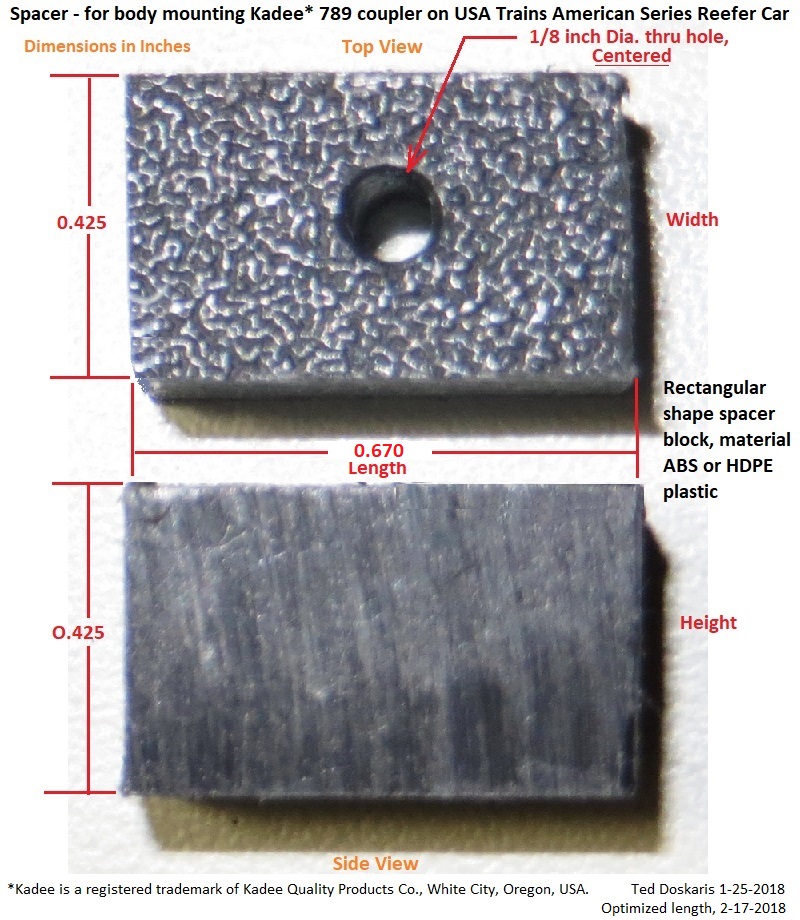 Rather than modifying the Kadee coupler box & lid and fabricating a spacer, these components are available in 3-D printed form. These "CamPac" components include the box, lid and spacer, along with a template used for marking the location and cutout area for enlarging the car's draft gear opening - illustrated below.

The USAT factory may or may not have the car's underframe properly oriented.
Illustrated below is how the underframe can be removed and replaced on an example completed car. 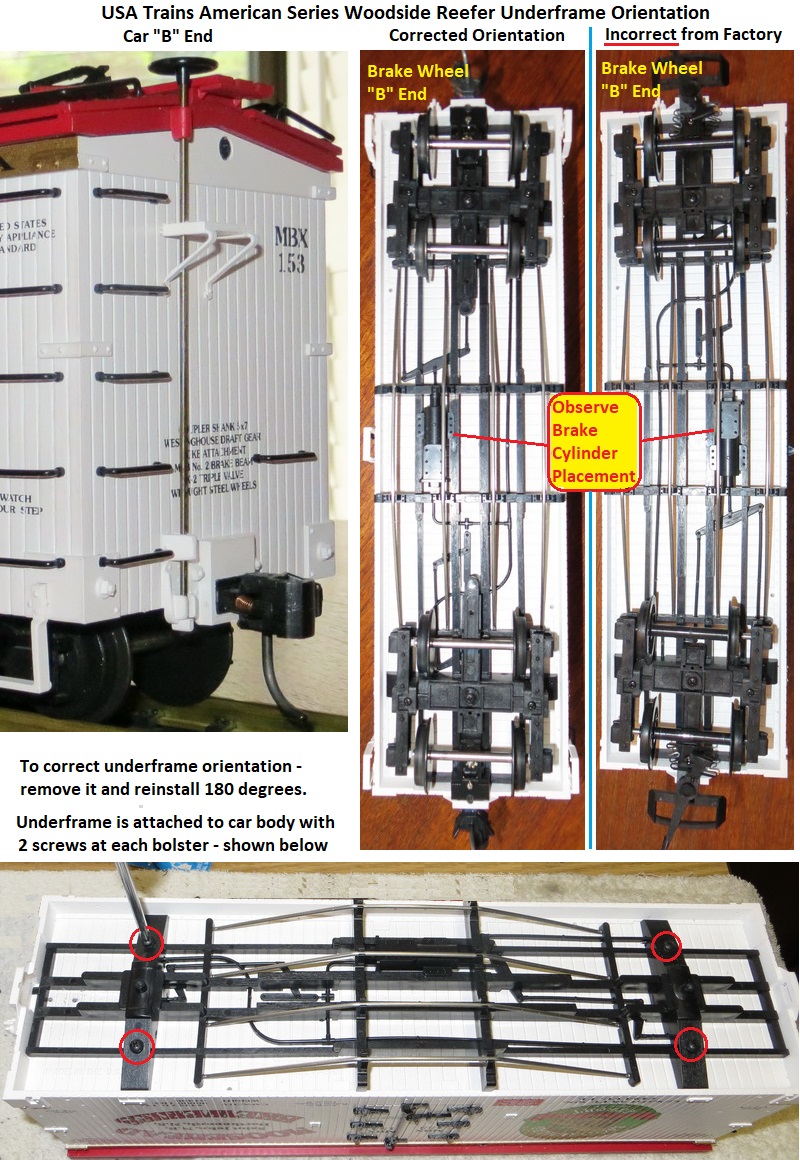 To be Illustrated is the procedure for installing the trimmed coupler and modified coupler box & lid.
Fitment finesse skills and a bit of awkward manipulation are expected to effect installation.

ADVISORY:  As a precursor test, follow the illustrated procedure below except without installing the underframe, coupler springs, and box lid. First, try to insert the coupler shank through the car's draft gear opening and place it over and onto the coupler box post. Then make sure the box (with coupler fully seated in it) can be pushed into the opening in a level position. Once in the opening, make sure the coupler can freely swing side to side without binding. If problems exist, fix before proceeding.

Follow the procedure below:
The coupler, springs and modified lid are installed in situ (not wholly pre-assembled). Typically, the modified coupler box will need to be tilted up and down from a 45 degree angle whilst fitting the coupler shank on its post. Removal is the same when trying to separate the coupler from the box with a little downward force on the box until the coupler "snaps" free.

Notes:
1 Mounting screws can be longer than shown above - like 1 inch.
2 Verify coupler swings freely. (The amount of torque applied to the screws may affect this.)
3 Leveling shim may be needed for coupler alignment with Kadee 880/980 gauge
4 Car assumed to include USA Trains metal wheels

Illustrated below are before & after parts installation. 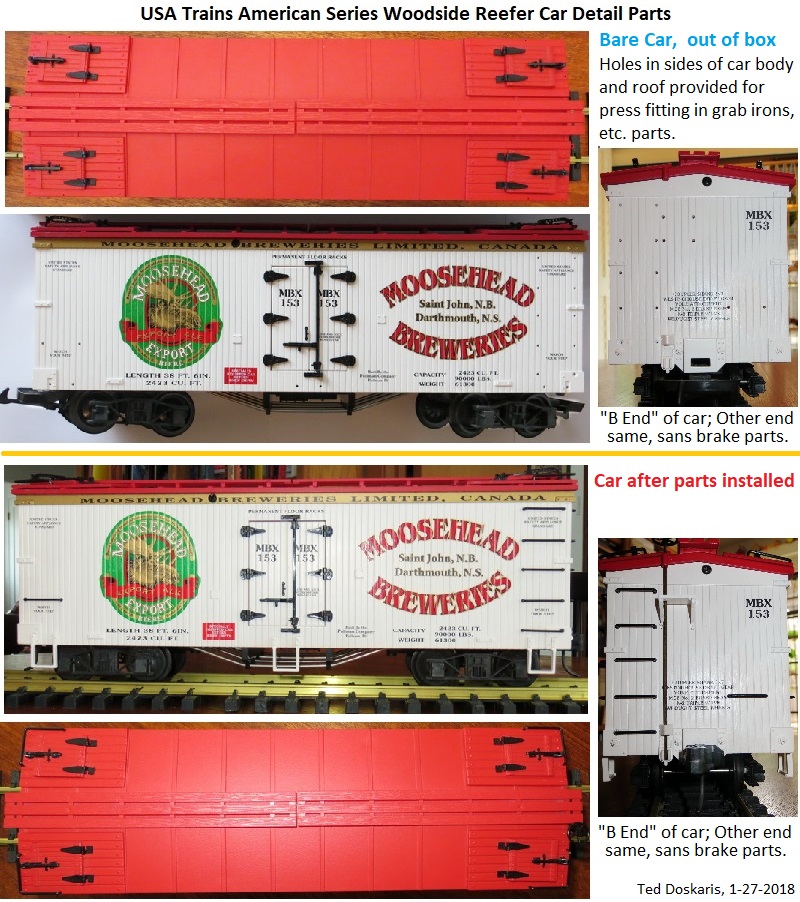 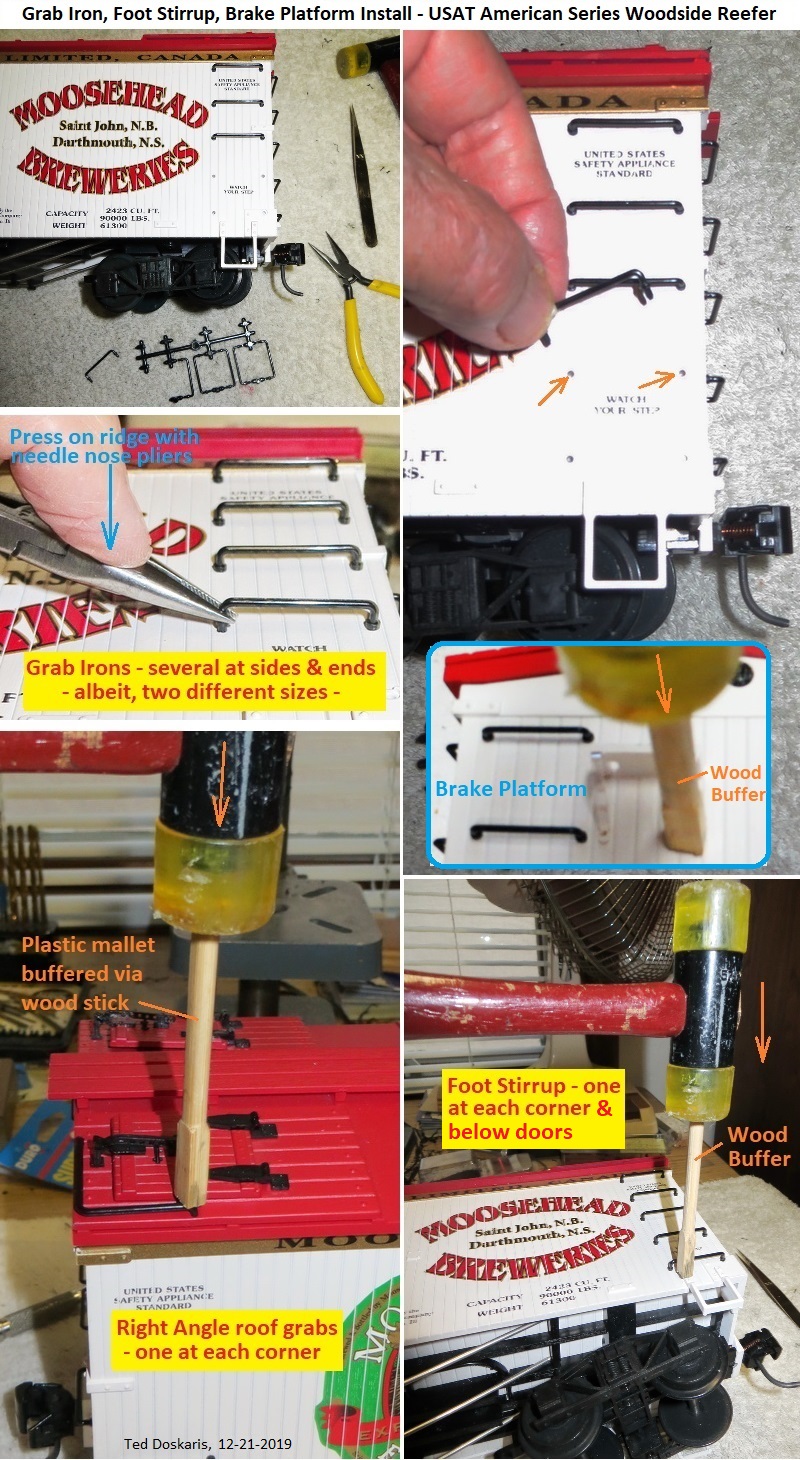 1  There will be a few extra spare grab irons that may be useful should some get lost or broken.
2  Some holes may need to have paint buildup "cleaned out" to avoid excessive force when installing parts. The #50 drill bit (0.070 inch diameter) stipulated in the USA Trains sheet enclosed with the car is a little too large for cleaning out the larger holes which risks loose fitting "grab irons". 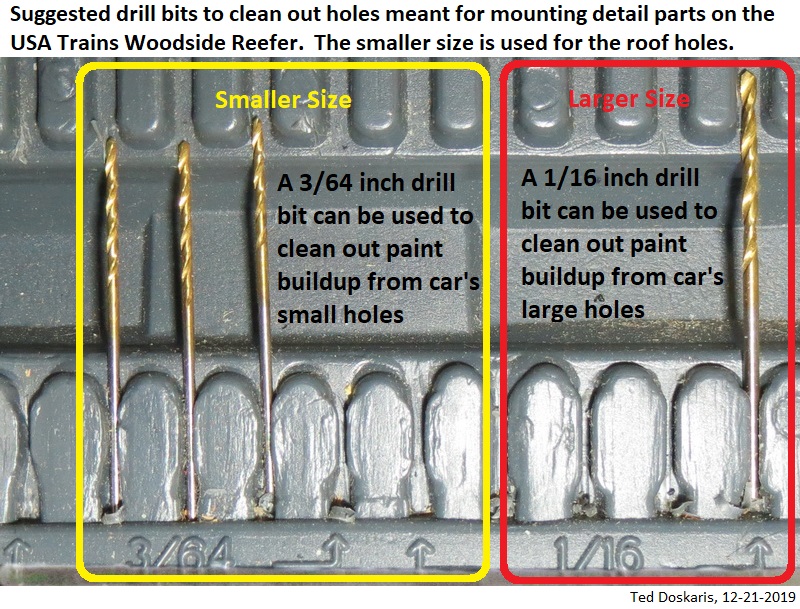 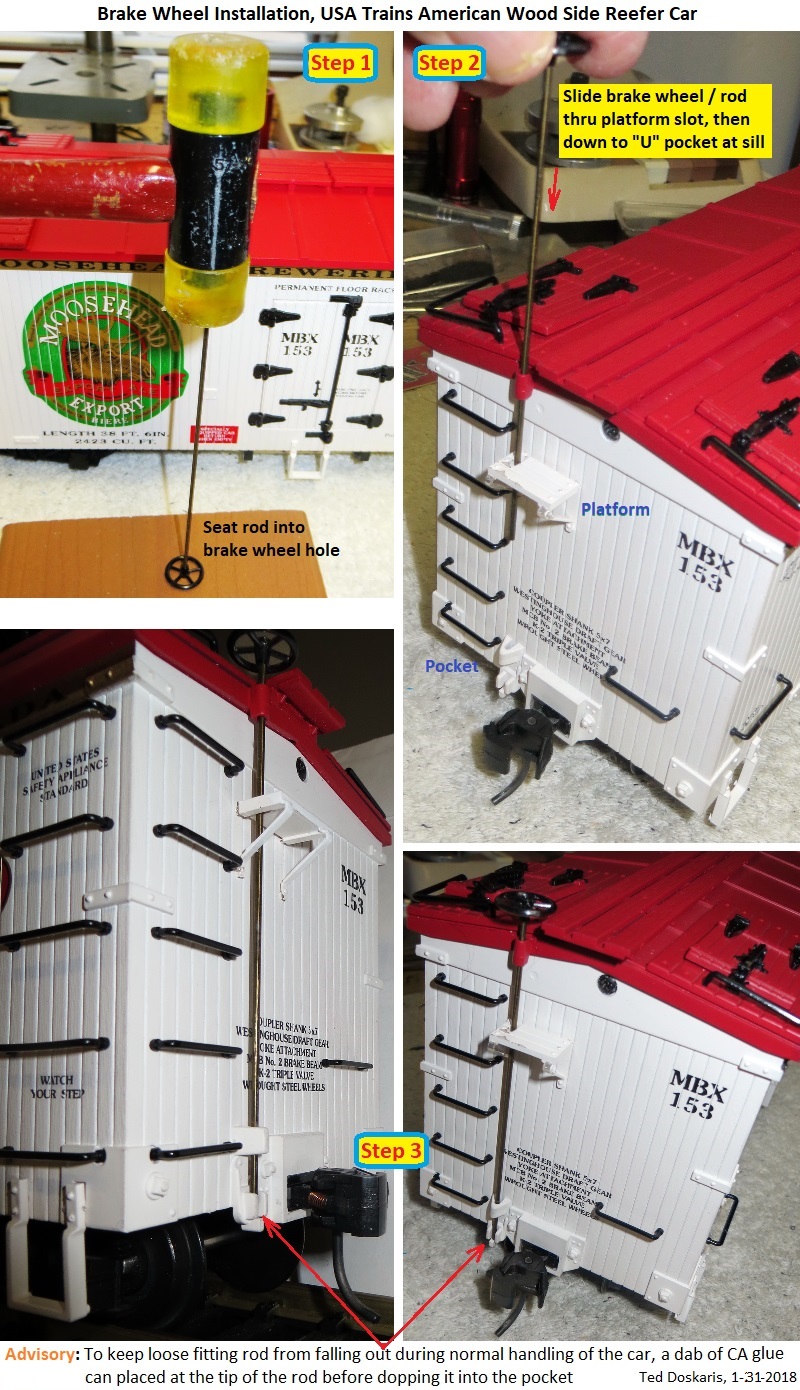 With body mount couplers, the trucks should be reversed so the long tang is facing toward the center of the car. When installed like this and trucks rotated, the tangs don't appear to interfere with anything during normal operation. Alternatively, the tangs can be cut off. 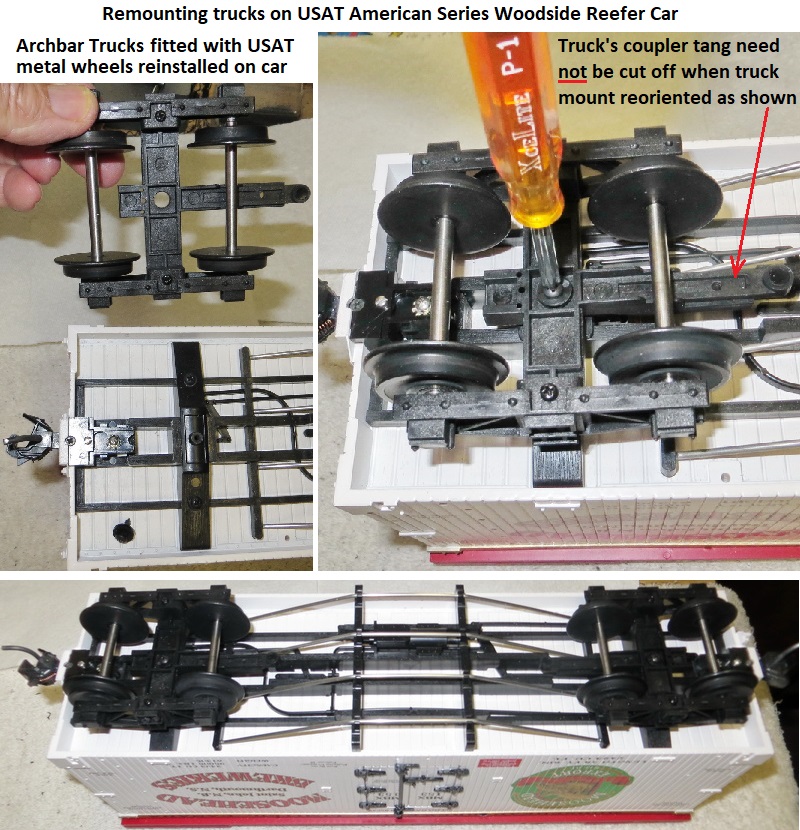 The car's trucks are refitted with USAT metal wheels. 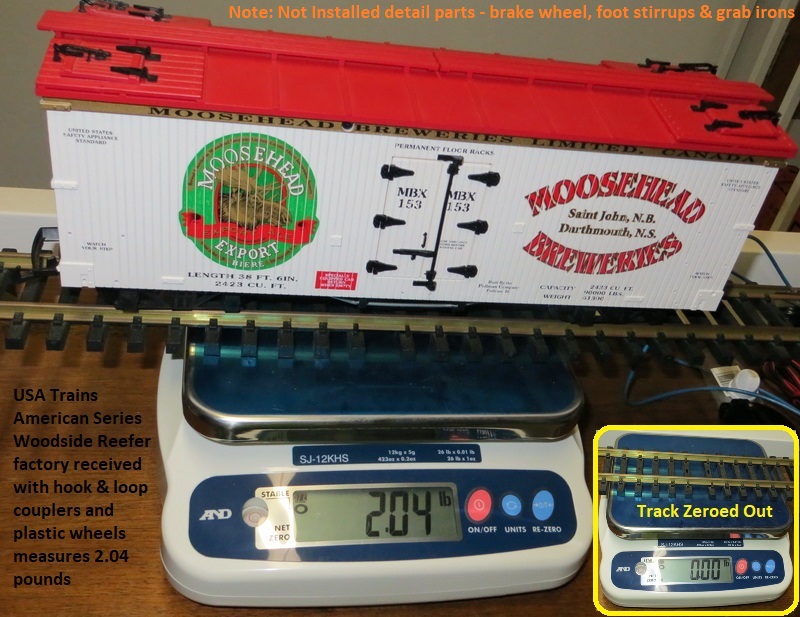 Shown below is the weight of completed car having metal wheels and all detail parts installed. It's about 3/4 pound heavier, which is operationally advantageous when going around tight curves - less likely to "string-line". 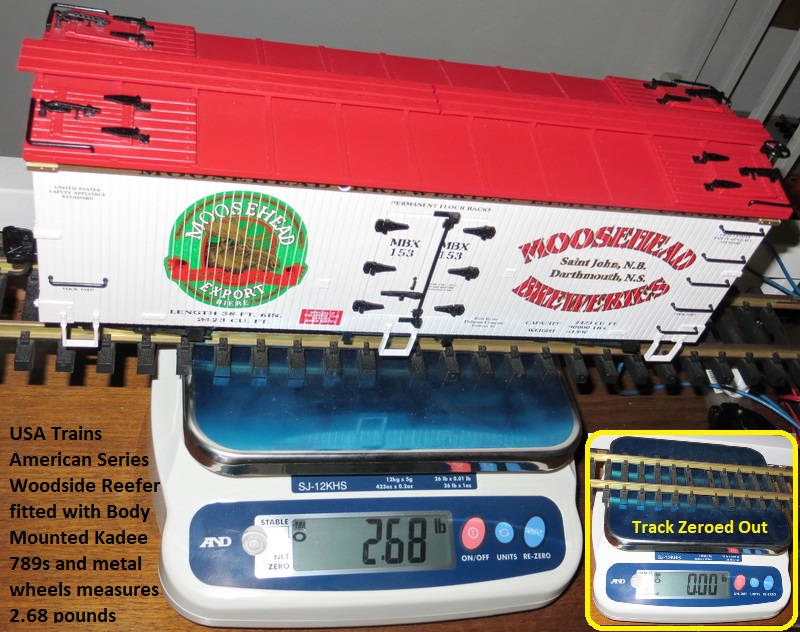 Whilst the car with body mount couplers is shown on 8 foot diameter track, it may work on slightly tighter curves. In any case, in a layout it's advisable to place a straight track section having the length of a longest car intended to be used placed between curves having opposite diverging transitions (aka "S" Bends).