By raising the plow up by 0.1 inch its bottom will be about 0.2 inch above the railhead that provided good operational clearance on my outdoor layout.

Note:  For simplicity, the SD40-2 will be referred to as SD40 in the material presented herein.

The USA Trains SD40 diesel locomotive packaging includes two snow plows with the intent for one to be fastened on each end of the loco.  Some prototype railroads, like the Southern Pacific (SP), used the plow only on the cab end of the loco.  Accordingly, my SP loco only uses one plow.  A flat plug was made to cover the rear pilot opening of the loco.

As to the pilot plug and implementing Kadee centerset couplers, 3-D printed "CamPac" components designed by me (Ted Doskaris) in conjunction with Colin Camarillo are available via Colin's Web site.

With the snow plow attached to the loco's pilot, it worked OK on my flat underhouse layout, but in retrospect the plow's clearance over turnouts, Aristo-Craft car rerailers and Kadee uncoupling track magnets was so marginal that it's a wonder it did not strike these!  Of course, when the loco was first operated on the outdoor layout, the plow broke off, the loco ran over it and then derailed!

In this regard, it is to be appreciated that the USA Trains SD40-2 DIESEL LOCOMOTIVE OWNERS MANUAL aptly includes a warning about the snow plow with respect to operation on inclines (aka, grade transition increase). 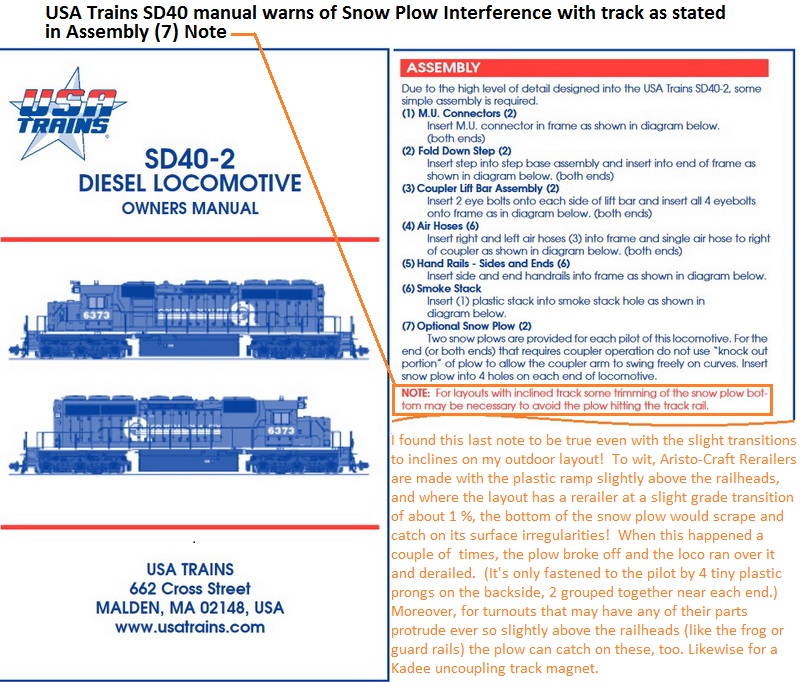 When installed, the plow's mounting prongs just press fit into corresponding holes in the loco's pilot. 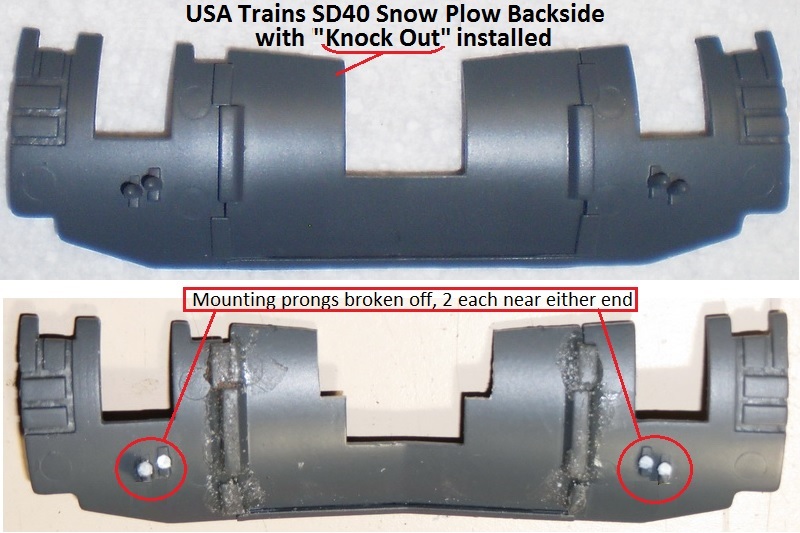 The groups of 2 prongs on each end appear to be arranged this way when the "Knock Out" is not used to keep the plow better secured (avoids twisting if only one prong) since there is little strength with only the small bottom strip of plastic remaining that connects both ends of the plow.  The knock out is not used if keeping the USA Trains low mount factory coupler assembly.  I use the knock out with slight modification since I mount Kadee couplers higher up in the pilot.

Shown below is a snow plow comparison of USA Trains SD40 & SD70 3 axle truck locos.  The SD70 plow has a relatively large clearance above the railhead.

The USA Trains manual instructions state you could trim off the bottom of the plow for improved clearance, but this removes desirable detail and weakens it to a great extent, particularly if using the factory coupler assembly without the knock out.

If using Kadee couplers, the plow can be relocated fairly easily.  One way is to drill  4 new same size holes in the pilot 0.1 inch directly above the existing holes that serve to mount the plow.  Of course, this works if you don't have a pilot that has broken off mounting prongs.  If you choose to do this the holes should be tangent to the existing holes, so it's best to plug the existing holes to prevent break through when drilling or when mounting because the plow is press fit.

Since my plow had its prongs broken off, I used a different method as described in the following illustration.  This method is stronger than the factory mounting method. 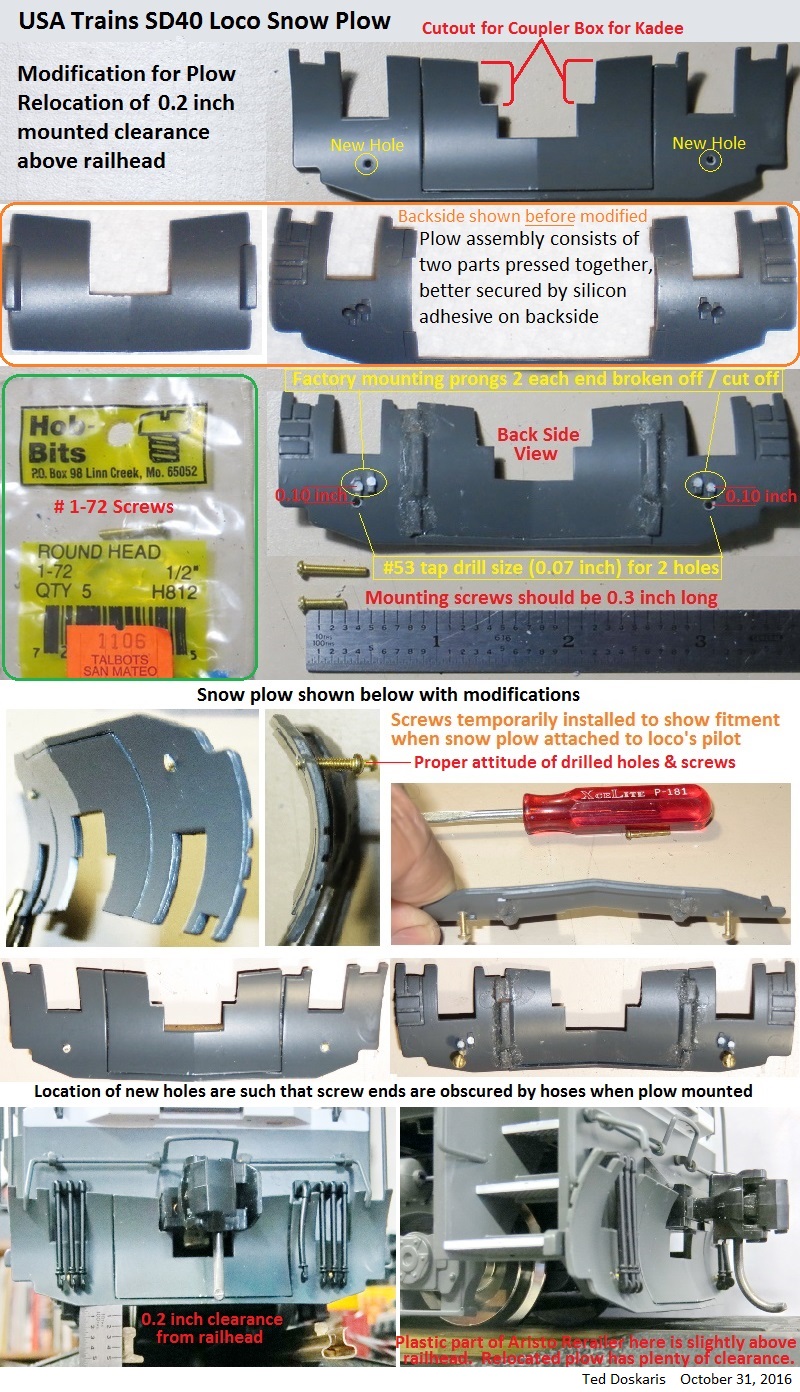 The plow is fitted onto the loco pilot as shown in the following illustrations. 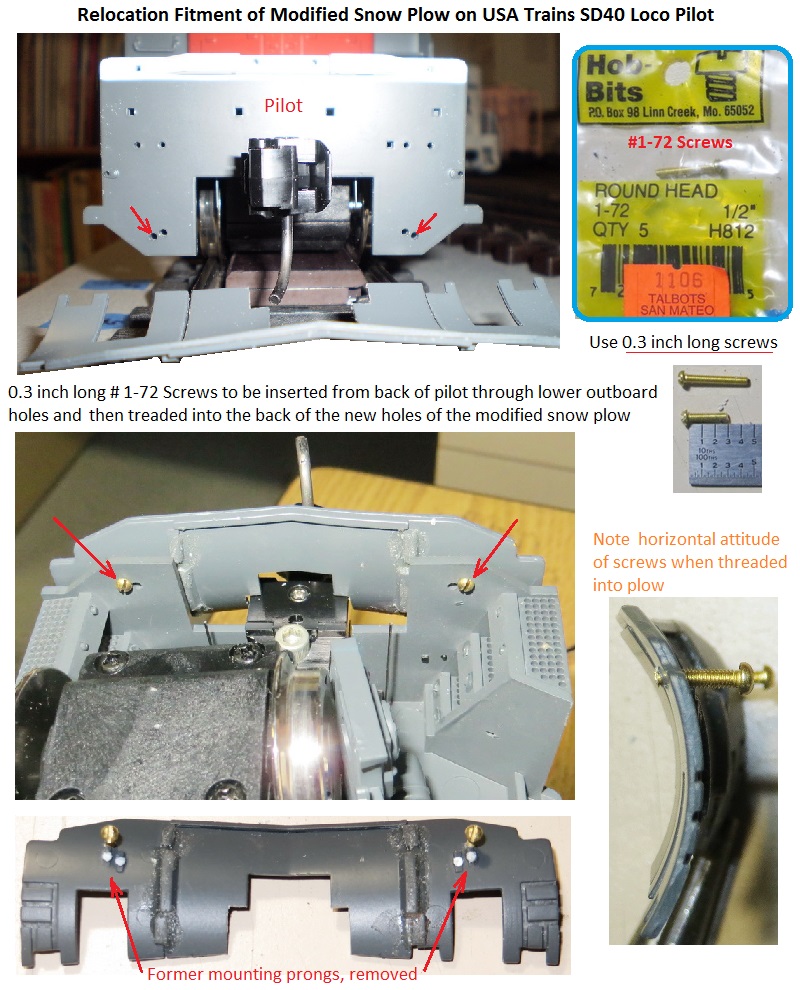 Note:  As an alternative, if placing the screw heads at the front of the plow and then threading the screws into the pilot holes, the screw size would need to be larger (like a #2-56) with the relatively large head being much more noticeable behind the hoses.  If choosing this method, a flathead screw is preferable to better conform to the curved shape at the front of the plow.

Note: In the above illustration,  the cut lever handles are shown in front of the plow. If you prefer a prototype look, position the handles between the plow and the pilot before fastening.

The below illustration shows an area of my layout where the snow plow had been too low and struck the surface of Aristo-Craft rerailer.  With the plow raised as shown, operation is OK.

Note the SD70 & SD40 vertical coupler displacement with the two locos coupled together on the incline transition.  This is exacerbated by the inboard offset mounting of the USA Trains 3 axle truck type locos as illustrated below.