Argh! Why did Accucraft hook the lights, smoke, wheels and motor together in the boiler? This is not good for any power conversion, battery, DCC or otherwise.

You have to pull the boiler off to disconnect this. What is funny, is that there is a 12 pin connector between the loco and the tender.The schematic shows only using 6 pins! Opening the tender, there are 6 leads from the tender plug that are unconnected.

Well, at least there will be enough connectors for the conversion!

The supplied schematic shows an isolated chuff switch, that's good. Upon closer inspection, the blue and green wires that go to the switch are likewise unconnected in the tender. (They were shorter, and hidden in the heat shrink tube that bundles the wires from the plug into the tender shell. 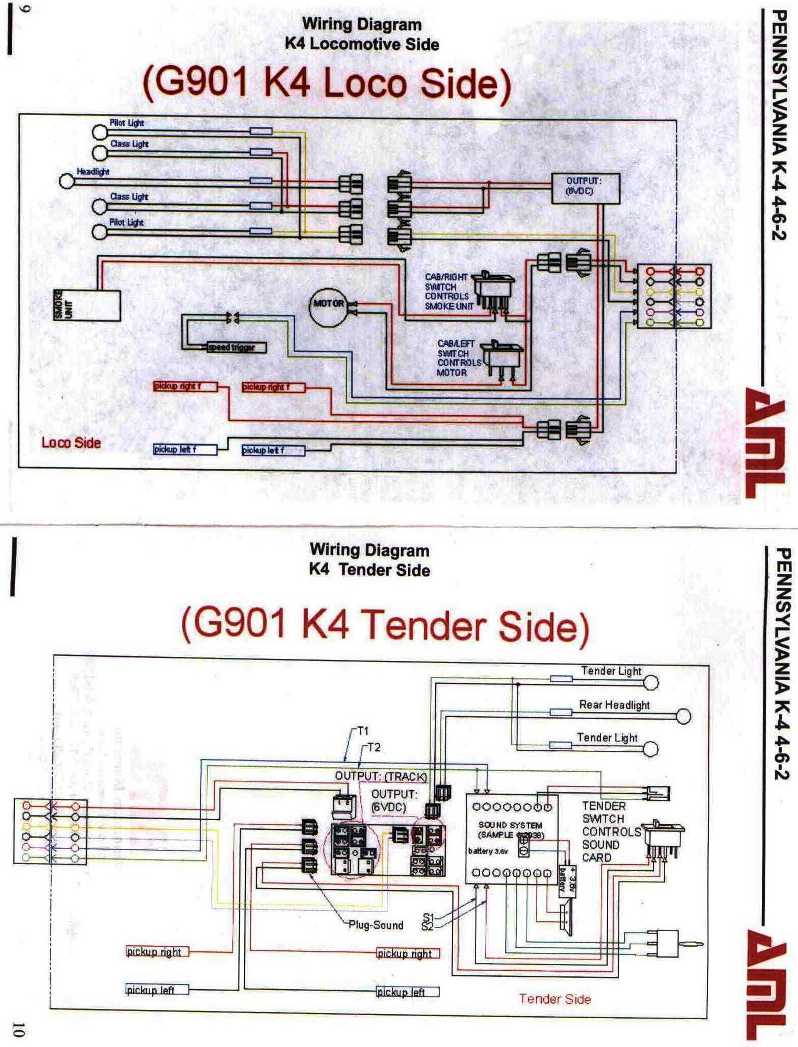 Smoke unit switch is on right side, double pole, double throw. On is to back of loco.

Motor switch is on left side, single pole, interrupts motor plus lead. On is to back of loco. 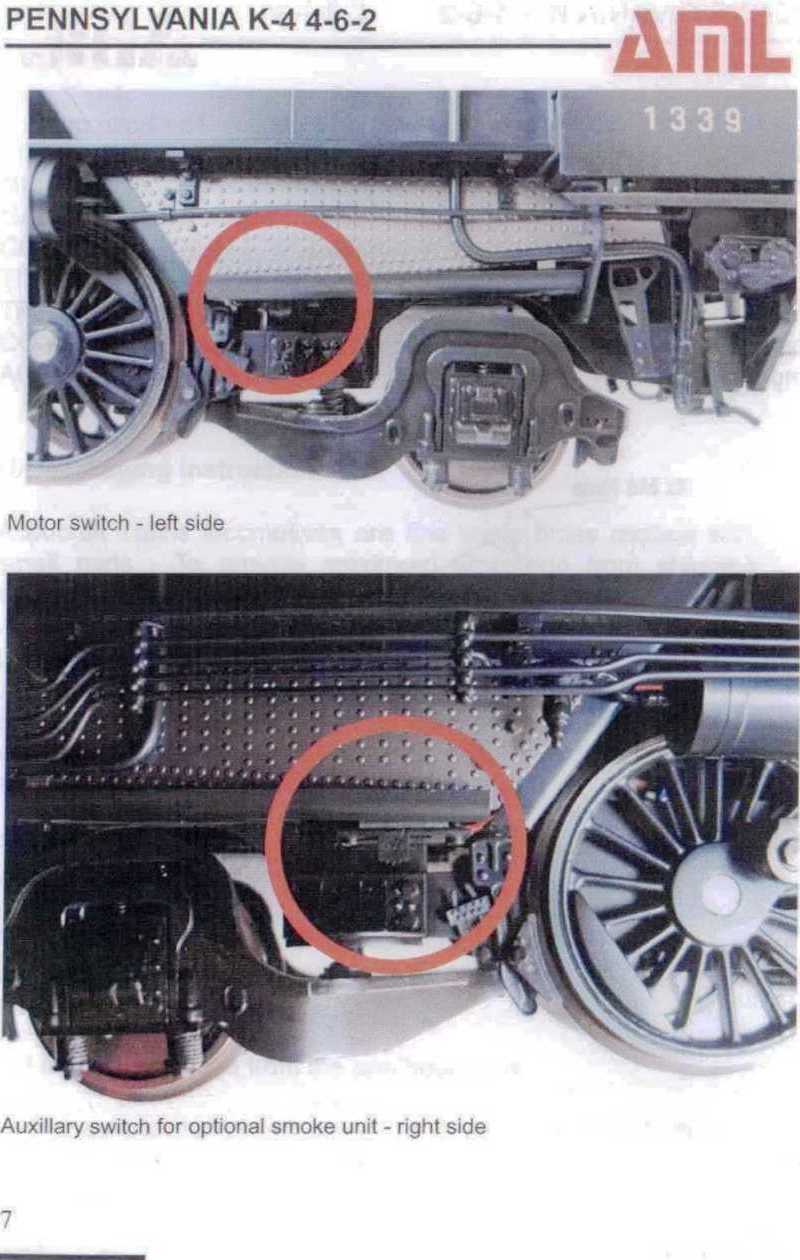 One brush pickup to a wheel did not work out of the box. The brush holder body has 2 threaded brass inserts to hold the brushes. An eyelet is slipped over the threaded part, and a tube with one end necked down screws on. The necked down part retains the carbon brush and spring. Unfortunately, there is little bare metal to conduct the power from the eyelet to the threaded body, the retaining tube is painted, so the end of it is painted (non-conductive) and the threads are also painted. The only way the power gets from the eyelet to the threaded part is the inside of the eyelet touching some threads. Very poor. I removed each "tube" and lightly sanded the end in a twisting motion on some fine sandpaper to remove the paint. They appear to be made of brass. Then I took a small piece of bronze wool, and pushed it inside. Pressing the wool to the threads with a small flat blade screwdriver, I was able to remove some paint from the internal threads. Don't overdo this, you will damage the internal threads. Ok, so now we have more reliable pickup from the 4 driver wheels (no pickup on center drivers)

On my model, the black wire is the right side, the red is the left.

On the supplied wiring diagram, it indicates the headlight is red and black, but it's yellow and black.

OK, so now the rewiring starts. On the socket on the loco, looking at the end of the loco, I have to pick a pin 1, lower right, then increasing to the left to end at pin 6 on the lower left.

pin 7 will be top right corner, increasing to pin 12 on the top left.

The wiring is so convoluted, I changed to this:

When you are soldering wires, you will have to remove the 4 screws and standoffs, and work the socket back out of the backhead. Once out, it's easy to solder to. All the lights are white LEDs, and they are supplied 6 volts. Remember that LEDs are polarity sensitive (so pay attention to the polarity on each set below).

In the tender, there is a small board that things plug into. The schematic shows it, but it's hard to tell which wires go to the upper right corner where there are 3 plugs.

In the far upper right corner is a connector with red and black wires, which is the backup light. The colors are reversed from what you would think, red is -, and black is +. You can see that this wire disappears to the rear of the tender.

The plug below it on the right side has a yellow and gray wire set, which goes to pins 3 & 4, this is the headlight, yellow is + and gray is -.

To the left of these 2 is another plug at 90 degrees to the others, and it has black and green wires (2 each) which is the marker lights in the tender. Again, reversed from what you would think, black is +, and green is -.

The current at 6 volts is about 3 milliamps per led (class and markers are double since there are 2 in parallel), it's about 5 milliamps per led at about 8 volts. I was not real comfortable with this, but I believe it was a shortcut to allow a single regulator to run the lights, and give more lighting at lower voltages. They are apparently surface mount leds, so the low current could make sense. They do not get noticeably brighter from 3 milliamps to 5 milliamps. Since I am running constant power to the rails, I can use simple current limiting resistors.

Power to the tender board comes from the tender pickups, red and black, one set plugged into CN3, the second from the upper left corner connector. There is a second set, I forgot where they were plugged. You can identify these wires because they come up from holes in the bottom of the tender floor.

The power from the loco comes from a similar connector, red and black, plugged into CN1, the upper left connector.

The wires from pins 5 & 6 are red and black and reversed in direction.

I next isolated the 6v regulator. It is under the motor, on the underside of the chassis. It has 3 wires, a red one that goes to the motor switch (cut), and 2 black ones that come up though a hole in the frame under the motor (cut these too). I stuffed these 3 wires under the motor, in case I would ever have to use later (hah!).

Now I trimmed the extra wire from the existing wires that went to pins 5 & 6. I left the wires to the connector, and cut away the wires to the track pickups. So these 2 wires now only go to the smoke switch.

I connected the track pickup wires to pins 7 & 8.

I connected the classification lights to pins 11 & 12.

Put tape over the spots where you clipped wires off.

You are done with the changes in the boiler.

At this point it's just a matter of hooking up wires.

I used the QSI magnum on the first install, it's the small board that gives you screw terminals for the Aristo plug n play decoder. After having motor drive problems with the QSI and the Pittman motor, I changed to a Zimo MX690V, which also has screw terminals.

My advice is to label all the wires coming from the 12 pin plug and test them with a meter to be sure.

You will also want to disconnect the wires from the existing tender board.

You should be able to put 3 wires for each rail pickup in the terminal, then the 2 motor leads.

The proper dropping resistors for my DCC voltage were 3k and 6k (the marker and classification lights are paired, so 3k was right for them, and the headlight and backup light were single LEDs so 6k was right.)

I wired the lights up to the QSI board so that the marker and classification lights were on all the time (the GND and UNREG terminals). The headlight and backup light commons went to the GND terminal, and the headlights (front and back) were connected to the FOR LT and REV LT. The software was the PRR K4 file from QSI, unmodified.

For testing, I just literally tossed a speaker into the back of the tender! Sounds great!

Put a little tape under the tender filler door to keep it from rattling from the sounds from the speaker. 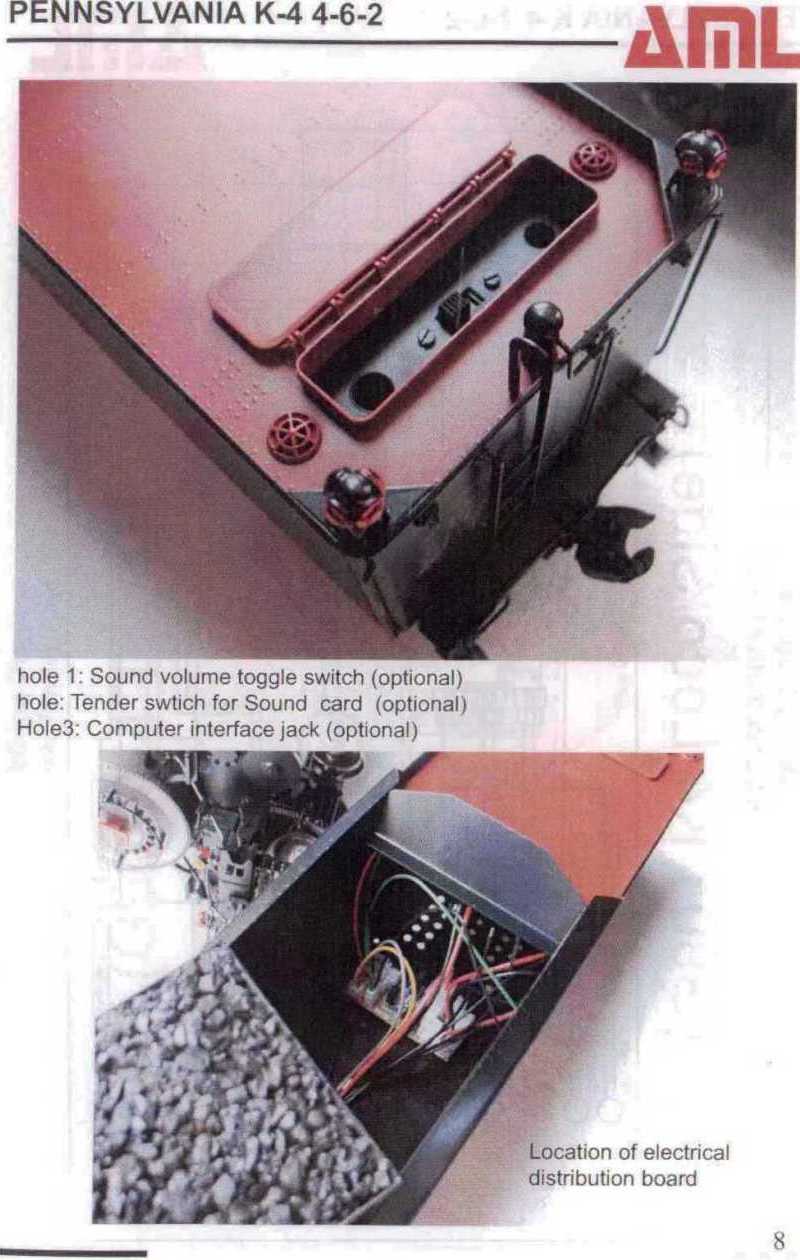 I had a tough time using the QSI, and eventually gave up and used a Zimo. The loco bucked and stuttered when trying to accelerate, and also had very little pulling power.

I figured the free running drivetrain may have something to do with it. I experimented a LOT with the BEMF parameters on the loco and got it somewhat improved but still totally unacceptable.

Here's what I tried:

changing momentum cv's to 0 or otherwise made no slow starting difference, left at zero.

changing cv3 to 50 and cv4 to 25 made a little difference, but would suggest setting them to zero when testing.

For reference, the default settings are: (there are 4 sets of settings, from lowest speed to highest)

At this point, I was convinced that the loco was completely confusing the BEMF circuitry, so I turned BEMF off.

But it still took a lot of throttle to start, and had very little pulling power.

All I could deduce from this is that the loco was starved for power.

So, after all the QSI experimentation, I was pretty frustrated.

I really began to believe that the QSI decoder just could not pass enough current to the motor, or there was still something limiting in the QSI drive circuitry.

The locomotive started smoothly now, and at slow speeds, and had more power all through the speed range.

Conclusion with stock geartrain and motor:

After more testing, it turns out that the QSI just cannot source enough current and the BEMF algorithm just cannot cope with the combination of the very low resistance and high current draw of the Pittman motor.

In addition, the free rolling geartrain causes the loco to be harder to control.

Even switching to a different decoder uncovers a more difficult problem: the gear ratio chosen for the stock motor/gear combination, which was an 11:1 reduction, was so low, that the Pittman motor went out of the safe operating region when trying to pull heavy loads.

I added 5 pounds of lead to the loco and vastly improved the pulling power, but not understanding the eccentricities of the Pittman motors, drew 5 amps and actually burned up the motor, overheating it such that the rotor locked, and melted my 8 amp NCE decoder!

Where to go next:

I'm now trying to get a different gear ratio motor/gearbox.

The stock motor was an 11:1 gearhead on a Pittman

I actually QSI to see what the problems with the BEMF operation is, but my theory is that the current draw is so excessive compared to the decoder rating that the BEMF algorithm just cannot cope.