Aristo-Craft made an number of power supplies, most under the "Crest" label.

The "Ultima" which is housed in an old battery charger case with a coarse-reading ammeter. (I used to have a Sears Craftsman 12v battery charger in the identical metal case).
This supply is basically a transformer and a bridge rectifier, like an old HO powerpack, just 10 amps. It is unregulated. It's fine for running a few trains and using a simple throttle, but nowadays most people are using a regulated supply. 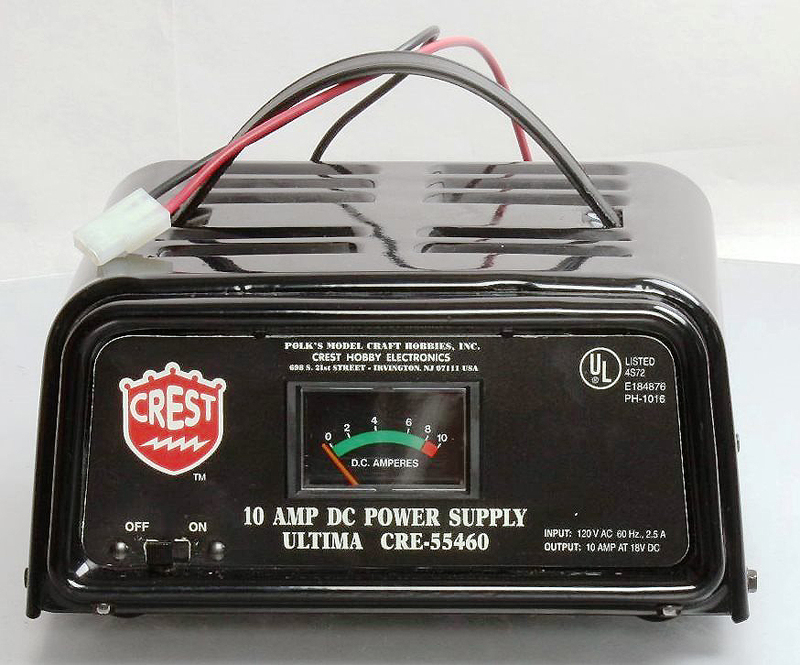 The Aristo "Elite" is a modern switching power supply. Early versions had multiple voltages, the newer ones have only 2 voltages and amp settings. It's a reasonably built supply, and has given good service to many people.

The Aristo "Everest" is similar in design to the "Elite" but seems to have a built-in flaw where it is very sensitive to turn on surges, and will shut itself off under certain loads. Leonard Kerns and I were offered  early production units to evaluate, primarily for use on DCC. Both of us experienced the same problems, shutdown of the Everest when first turning it on when connected to an NCE DCC booster. Even though there was no load on the DCC booster (not even connected to the rails) the Everest would usually shut down like there was an overcurrent situation.

As the Everest is not self-resetting, this is a problem, although self-resetting would just cause it to turn off again in this situation I believe. Leonard communicated several times with Aristo as did I. Aristo made a "mod" to his unit and the problem persisted.  All of this was in early 2007. Leonard also mentioned that the short circuit protection in the Everest tripped before the DCC booster's own protection circuit, so it required the power cycling of the Everest, rather than let the DCC booster handle the problem, and reset itself when the short was cleared.

The short circuit protection is supposed to engage after 2-3 seconds and then self reset. It did not on ours. Aristo finally came back with a "change" they would apply that involved a larger capacitor to increase the "trip delay time"... Leonard sent his in and it did not fix the problem.

The short story is that I would not recommend this supply unless you can try it and return it. Lewis offered to "fix" mine. I sent mine to Ted Doskaris for use with Aristo TE's where it seems to be working ok.

(The only other thing I have ever received free from Aristo was a jar of "Electro-Lube" which has been responsible for destruction of hundreds of freight and passenger car sideframes. Still sold as plastic compatible to this day.)