Many people over the years just knew this product as the Sierra, and not from the parent company Soundtraxx, most known now for the Tsunami, a very successful DC/DCC sound and motor decoder, the first all in one decoder that changed the sound based on actual motor load, via BEMF.

Still, many people still love them and used ones are still out there.

Back side showing ROMS that have functionality and sound files:

"Front side" where the screw terminals are:

Apparently, all the Sierras have the same part number on the board (312023 or some such).

I don't have any pictures of Rev A.

Rev B has no mounting holes dated 1987

Notes: (read before powering up)

One thing that is very important, this unit requires fixed polarity, it cannot be connected directly to the rails in a normal DC system. The manual is not clear on this, but if you look at the wiring diagrams that show ACTUAL track power circuits, you will see a full wave bridge rectifier between the track and the Sierra.

Also, there is no listing in the manual for all the screw terminals. There is a very problematic connector for the battery, and you can use the screw terminals instead. This is NOT in the manual, but it's true, Terminal 2 is ground and Terminal 4 is positive. You can kind of verify this by seeing that terminal 2 is used for the volume up down control, bringing terminals 1 or 3 to ground. You can also see terminal 4 is the common for lights, and this is normal in DCC decoders, the common for lights is actually positive. The point is using screw terminals to power the board as opposed to finding the small 2 pin power connector.

Important: Again, nowhere in the manual, but there is an upper limit for voltage. Will run all day at 12 volts. At 14.4 volts it will run for a short while, like a test run. At 16.8 a very short period of time, and instant destruction at 18 volts or higher. When it stops working, it is damaged, and it is normally the 4 lead bridge rectifier, and often burns the board enough to make it non-repairable.

Be sure to use a momentary switch for the volume control, and make it a SPDT center off momentary. More reasons later.

This is not well documented, but can be inferred from the diagrams.

Note that the board has several inputs. 1 set powers the board, another set senses the speed, and there is a chuff input.

Note the backup battery (to let it run on no, or very low speeds) is connected to the small connector on the bottom edge below) This connector is small, and easy to damage. You can use pins 2 and 4 for the battery.) 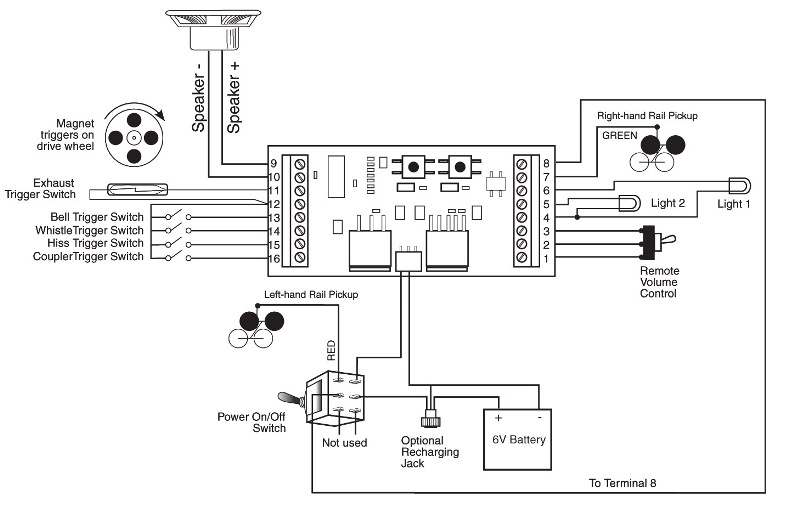 A number of application notes were made, besides the Steam and Diesel manuals.

I have them in PDF form, email me if you need them.

Auto-Exhaust is what we call auto-chuff, meaning changes vs. motor "voltage"... the triggered mode is called "sensor switch synchronization"

Also on controlling sounds, there are usually 3 options, and the wording in the manual is NOT consistent. Reference page 23 in the Steam manual for example.

1. The mode where track voltage triggers the whistle (an increase) is called "Voltage Control" pretty consistently. What is not described is how much voltage at what speeds for how long.

2. triggered mode, which is also called "sensor switch as trigger" seems to be any transition from ground to +5 volts, but is not defined.

3. switched mode is also called "sensor switch as control" is where the input is connected to ground to activate the function.

You may need to set the "Filter Rate" to work around any fluctuations in the triggering of sounds in "voltage mode"....

Note: the grade crossing control is pretty weird, note step 14 on page 23 of the steam manual AND page 27 where is says how tricky making the grade crossing work is. The advice is to make this triggered and NOT voltage controlled.

One thing that is very important, this unit requires fixed polarity, it cannot be connected directly to the rails in a normal DC system. The manual is not clear on this, but if you look at the wiring diagrams that show ACTUAL track power circuits, you will see a full wave bridge rectifier between the track and the Sierra.

Messing up programming with the volume switch.

The purpose of this gadget is to do the optoisolation to avoid the "full rpm" syndrome talked about below. It also provides regulated 12 volts or so, which keeps sound going when stopped.

Sound revs up to max all the time:

Some of the H bridges (that supply the motor output) in some motor controllers have a weird property that the voltage across the motor leads when at speed 0 is indeed zero, but unfortunately, each motor lead with respect to ground can be full battery voltage. This causes the Sierra to believe the motor is at full speed, since it is checking both motor leads individually with reference to ground.

Historically, this was not noticed initially, since the original Sierra units were Steam and most people used a chuff switch at the time. As more people used autochuff (lack of chuff trigger or just did not want to bother) and also when the diesel sound systems came online, you saw more issues with this.

Soundtraxx' answer to this issue was the 810111 "Radio Control Adapter Board", which really had nothing to do with it being radio control, it was tied the the characteristics of the motor output section. See the circuit below: 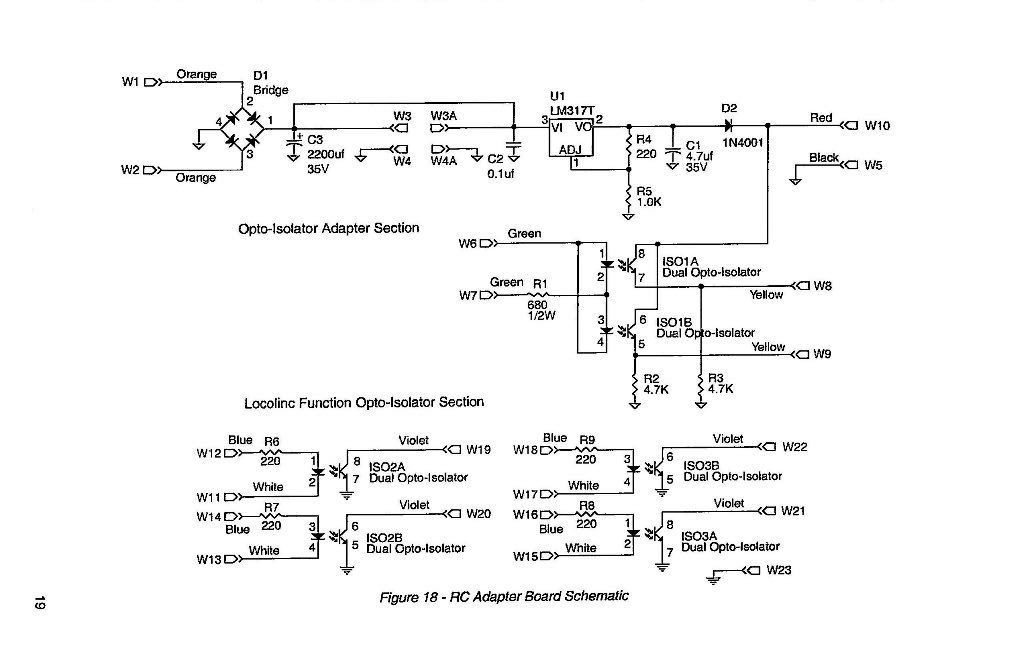 So, while people (including myself) keep mentioning the board with optoisolators, the isolation was not needed, but the logic that made it so only one motor lead could be "on" at a time, In the diagram above, the inputs W6 and W7 are wired in such a way that only one of the LEDs  can be on at a time, thus stopping the "both on at a time" issue with the motor outputs. The downside of this (speaking from an engineers viewpoint) is the signal is unnecessarily inverted. It doesn't harm anything, just could have been a better design. By the fact that optoisolators are used, people have latched onto this and read more into the problem than what it is.

Another cause for max rpm was early PWM throttles that ran at a very low pulse rate. Early Aristo-Craft "Train Engineer" units were one example. In this case, apparently the frequency was so low that the Sierra board interpreted the pulses as full throttle.

To fix this, you needed one of the big filter units with a big inductor and filter caps. This basically smoothed out the pulses closer to "analog DC"