Yes, it was made by Accucraft. I have one, It's a "kid pleaser", it's a model of the one at Disneyland.

The model looks IDENTICAL to the prototype below in Disneyland, CA (without the figure in the gray hood!) except the model has siderods and "working" cylinders: 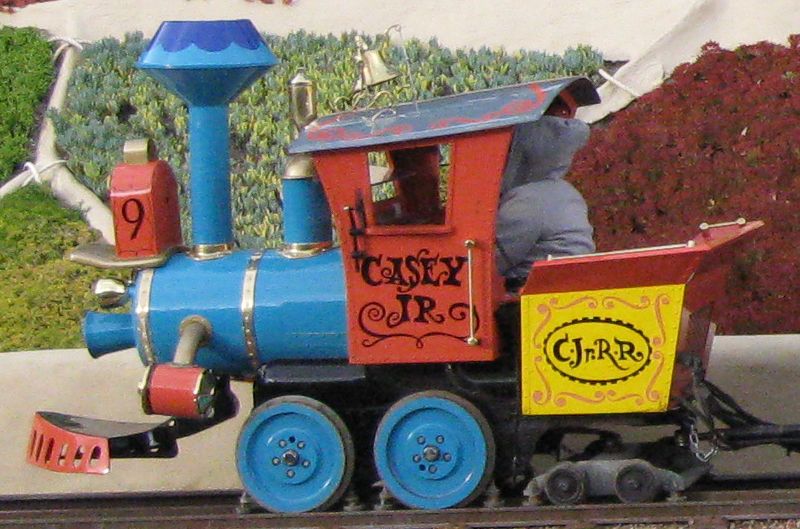 I'm still completing the DCC installation, I tried an HO Tsunami, but it would go into overvoltage on my layout. I added some diodes to drop the voltage. That solved the overvoltage faults, but then the decoder still shut down from overheating/overcurrent. I tried putting a diode in series with decoder track inputs, per a suggestion from George Schreyer, but that made no difference. Interestingly, the loco only responded to commands with one polarity of the diode.

I changed to a Zimo 642, with no problems, so that looks like the decoder solution. I still need to build the speaker into the loco.

Below is a picture of a complete train someone built: 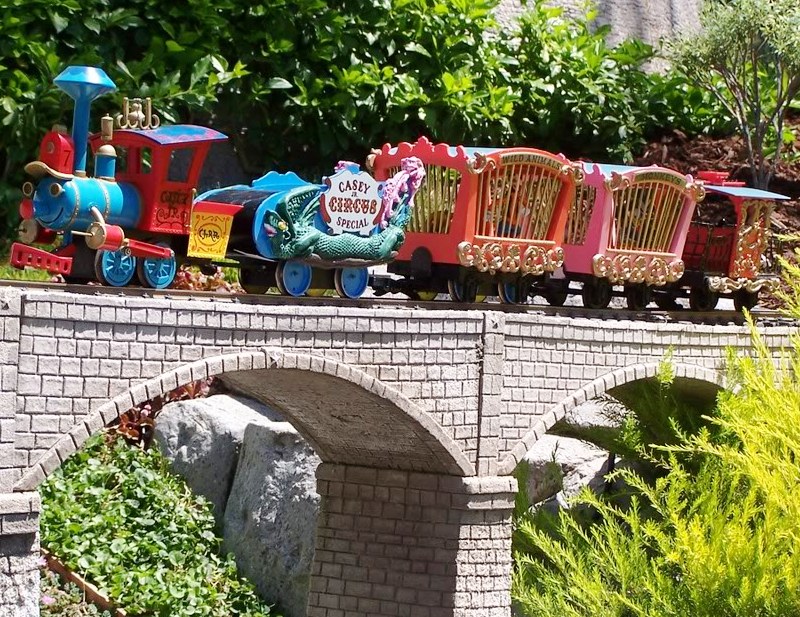 The basic unit is held together by the cab assembly, but you need to remove the coal bunker first.

There are 4 screws under the "coal hopper" at the back of the loco. Remove them and the bunker will be loose, but won't come off yet.

Finally remove the center screw. (Note this screw is longer than all the other screws) By this extra clearance you can pull the coupler out. Now you can drop the bunker down to clear the 4 posts it was screwed to.

You can now remove the cab by removing the 2 screws in the cab floor and one on the backhead. This last screw is also different from the rest, much smaller in diameter.

Now the boiler can be released. You see 2 tabs at the rear of the boiler that were held down by the cab, and you have to pull the boiler forward about 1/4" to release it from a lip on the motor block. Once it is clear of the lip, pull the back of the boiler up and away. It's  a tight fit around the motor can. Take your time, be careful not to break anything, like the small tabs that hold the boiler down.

There's room in the boiler for a small decoder.

To remove the bottom plate you remove 6 screws. (The 7th in the back center is the coupler screw)

There's not much inside the "motor block", you see the motor shaft with worm meshing with the gear on the front axle, and the 2 metal wires acting as wipers on the axles. Good time to lube up the gears, and a drop of heavy gear oil on the axles.

At first, I decided to use an HO Soundtraxx Tsunami, I assumed the motor current would be low enough to "get away" with this.

What I forgot was the Tsunami's sensitivity to high track voltages. It would often overvoltage. There are 2 LEDs in the package, which shine through the purple (!) heatshrink. One is halfway down the side of the decoder, the pilot LED and that stays on. The other LED is at the end of the package, where the wires exit, and if it blinks, then you have overvoltage.

To solve this, I made two diode "strings" of 5  three amp diodes each. This drops the DCC track voltage 3.5 volts, so at my worst case 24 volts, 21.5 volts will hit the decoder. Right now, at 24v on the rails, it runs sometimes and sometimes over voltage. The Soundtraxx spec says 22 volts max before the fault, the max voltage before destruction is 27 volts, although anything over 22 volts goes into a overvoltage fault.

I shoved the decoder in the boiler, and have yet to work out the speaker, but will put it in the small coal "hopper" but may also cut a hole beneath to get more volume.

Notes on decoders for this loco:

I need to measure the steady state current, but the dang Tsunami seems to be horribly optimistically rated.