Phase 2: A longer loop of track around the perimeter of the yard

So the inner loop is pretty small, and kind of a display loop, and good for kids. Now I need some running length, and some tangent track instead of all curves!

The beginning of the outer, longer loop basically starts at the crossover from the inner loop to the outer loop on the south side of the back yard.

This loop is a much longer run of track, and has a minimum radius of 7.5 foot (as compared to 5 foot on the inner loop).

The picture below shows the first crossover made of Aristo wide radius turnouts which has since been replaced with one made from Aristo #6 ones. The S curve from these turnouts caused operational problems with my 72 foot passenger cars.

As we proceed counter clockwise, the track is now going from the south end of my backyard turning and heading north up the grade on the retaining wall. 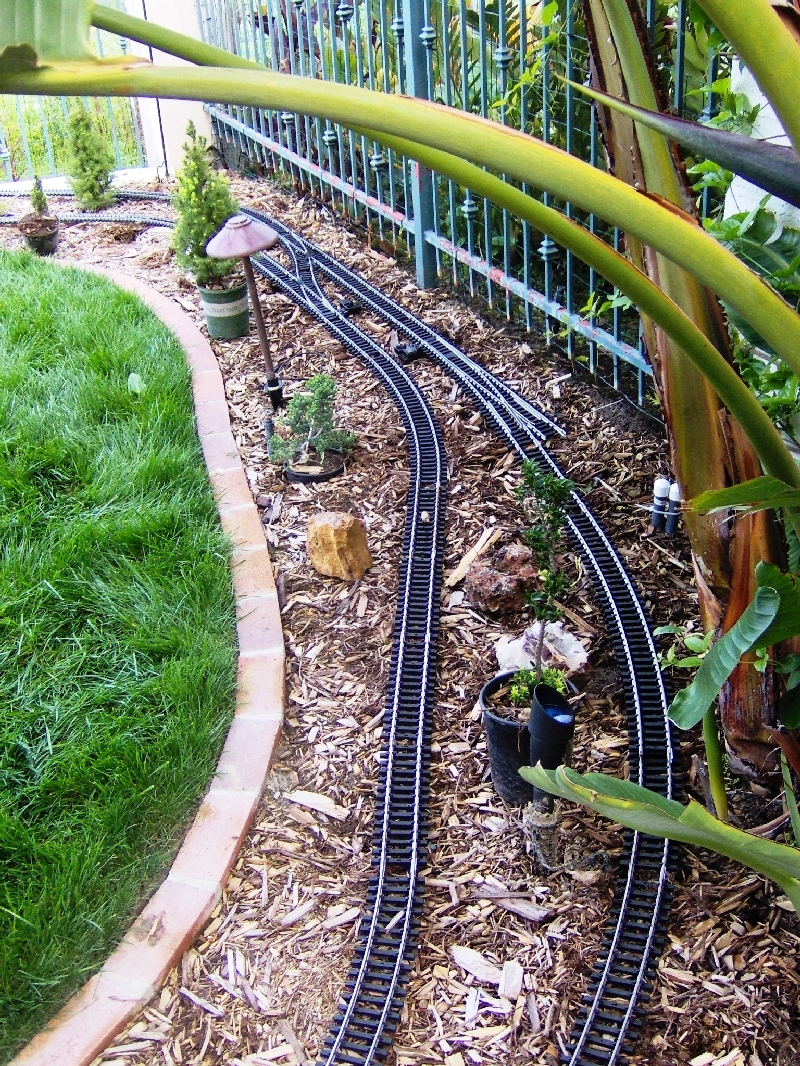 The outer loop proceeds north up this grade. I asked for a 2% grade, but it had to fit the height at the spa in the distance (hidden by the palms). Turns out it is a 2 DEGREE grade, 3.4%. 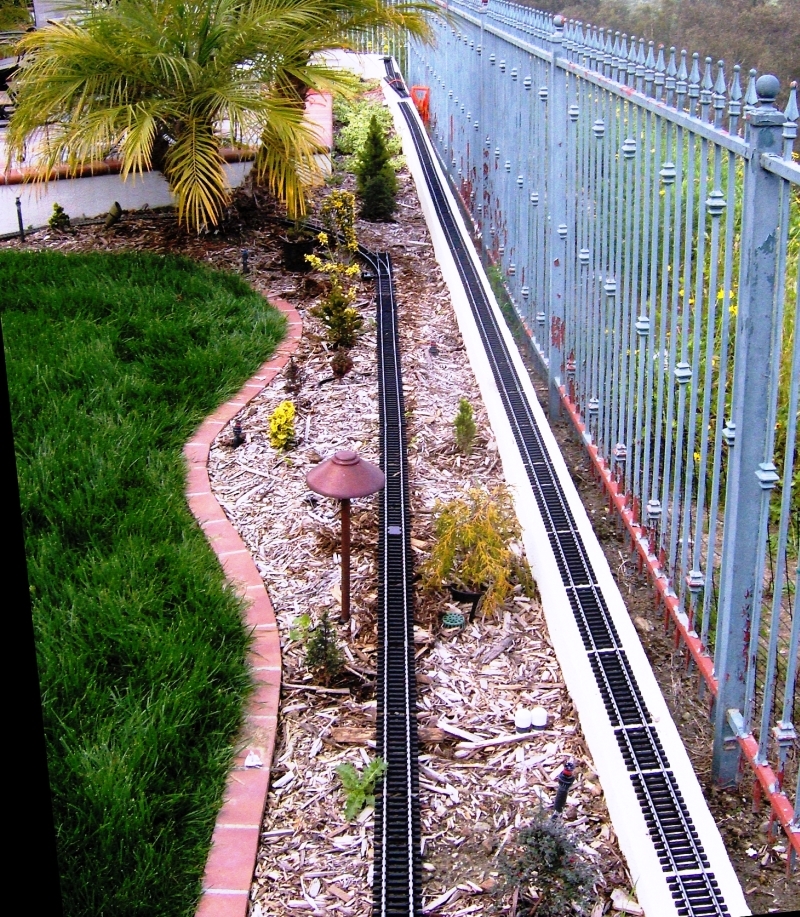 Well, I love to MU and doublehead!  You also see the inner looop track to the left, and a switch for a spur.

Another shot that shows the outer loop track climbing the grade, it is above the train you see on the inner loop. 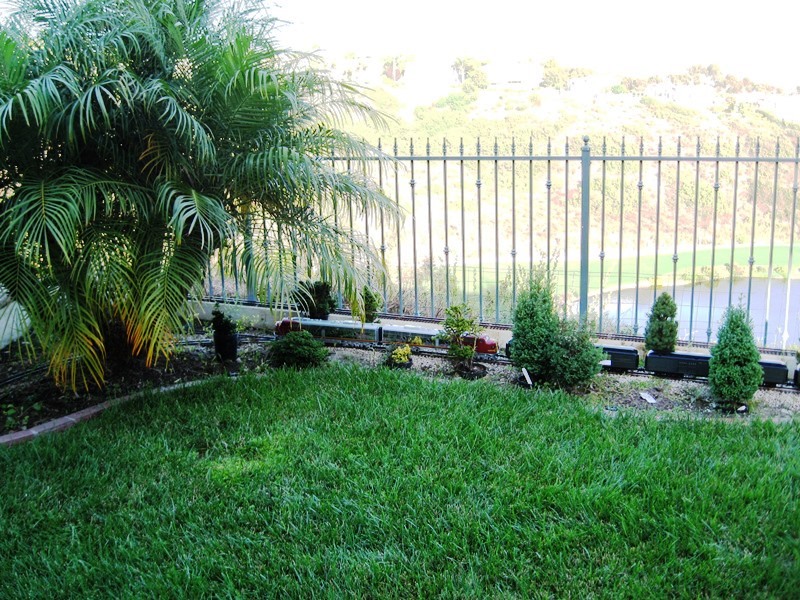 As we continue the grade, it approaches the spa and makes a slight bend: (the spa has since been replaced with a deck) 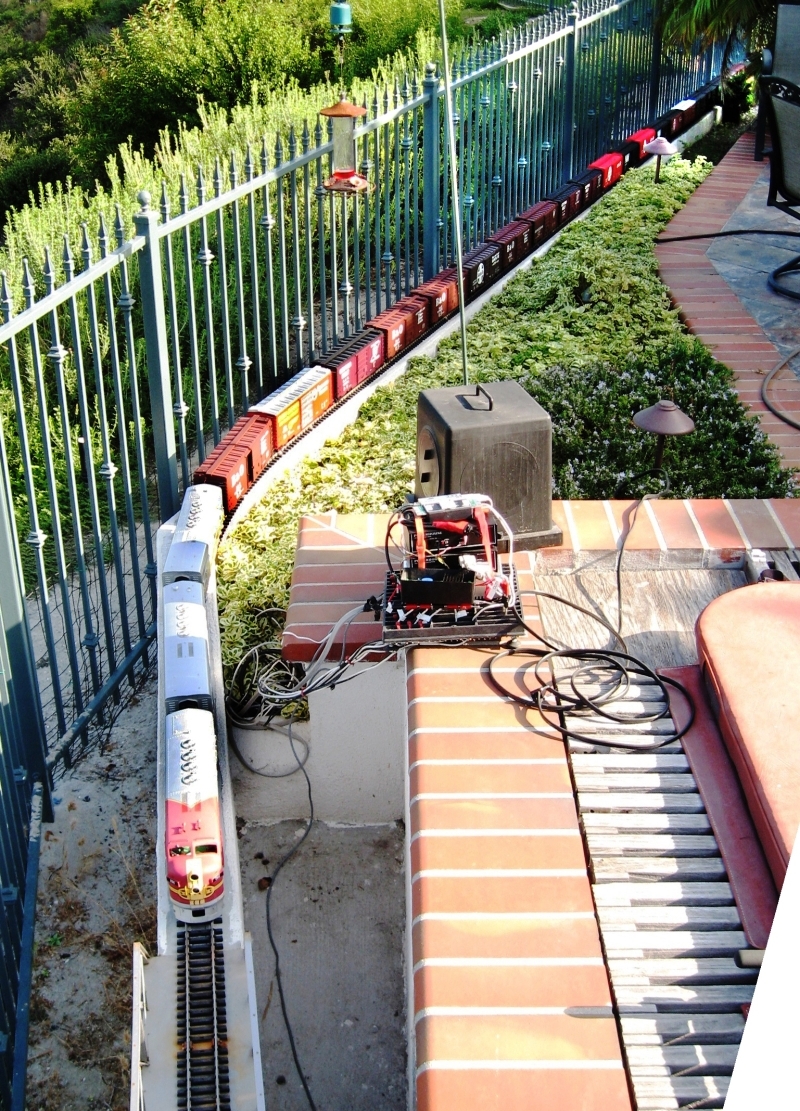 You can see the DCC electronics box in the back. It has NCE equipment, which has since been upgraded with a 20 amp Zimo system. (I had the box open to change some connections.)

The lead locomotive is just about to cross a stainless steel bridge, which bridges a mandatory gap for spa electrics access.

Below you can see a shot of the track and bridge from the other side of the fence: 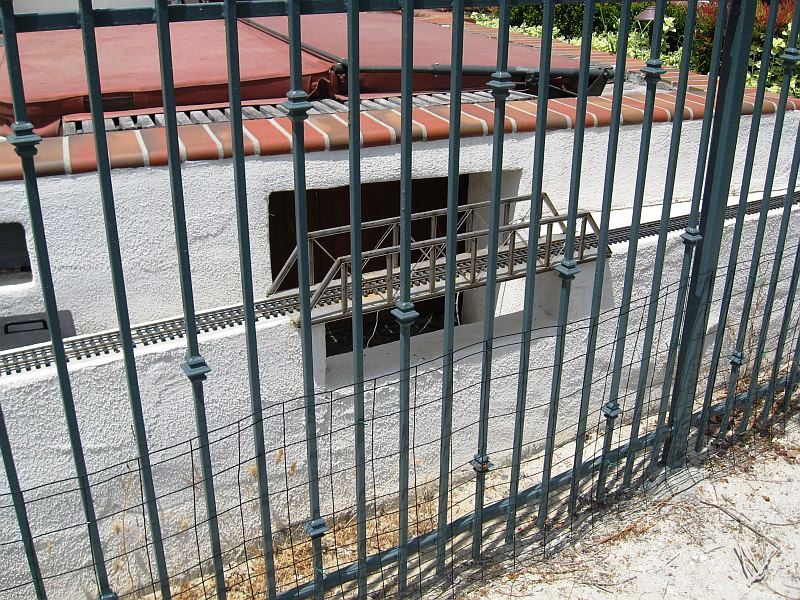 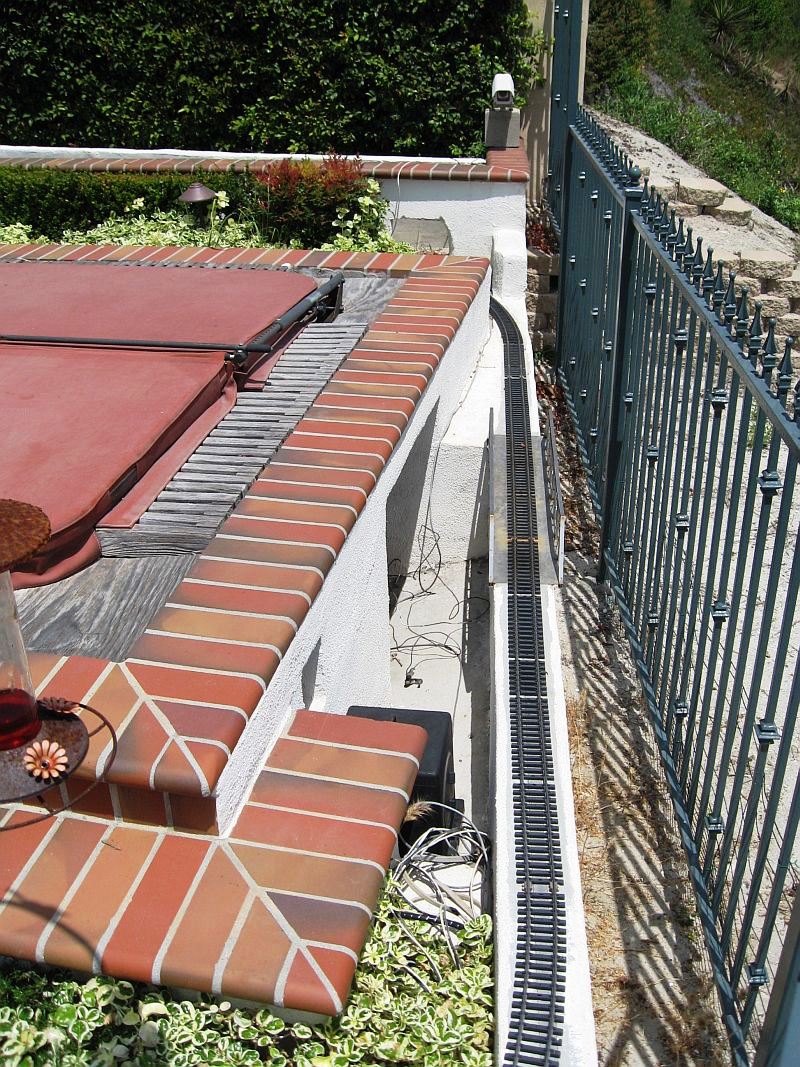 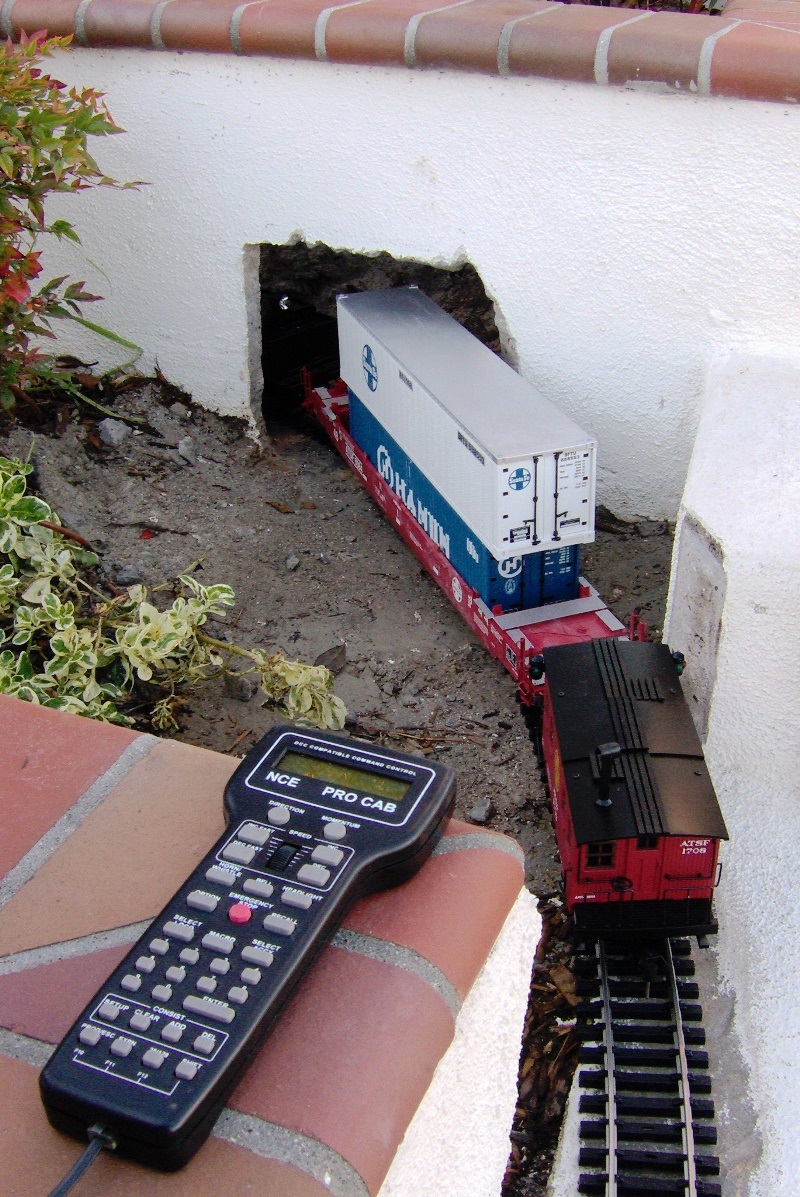 Next the track crosses behind the spa, and enters a tunnel into the planter. See the section on the "Tunnel Thru Planter" for details.

Now the track is at the north border and is heading west behind the fireplace. 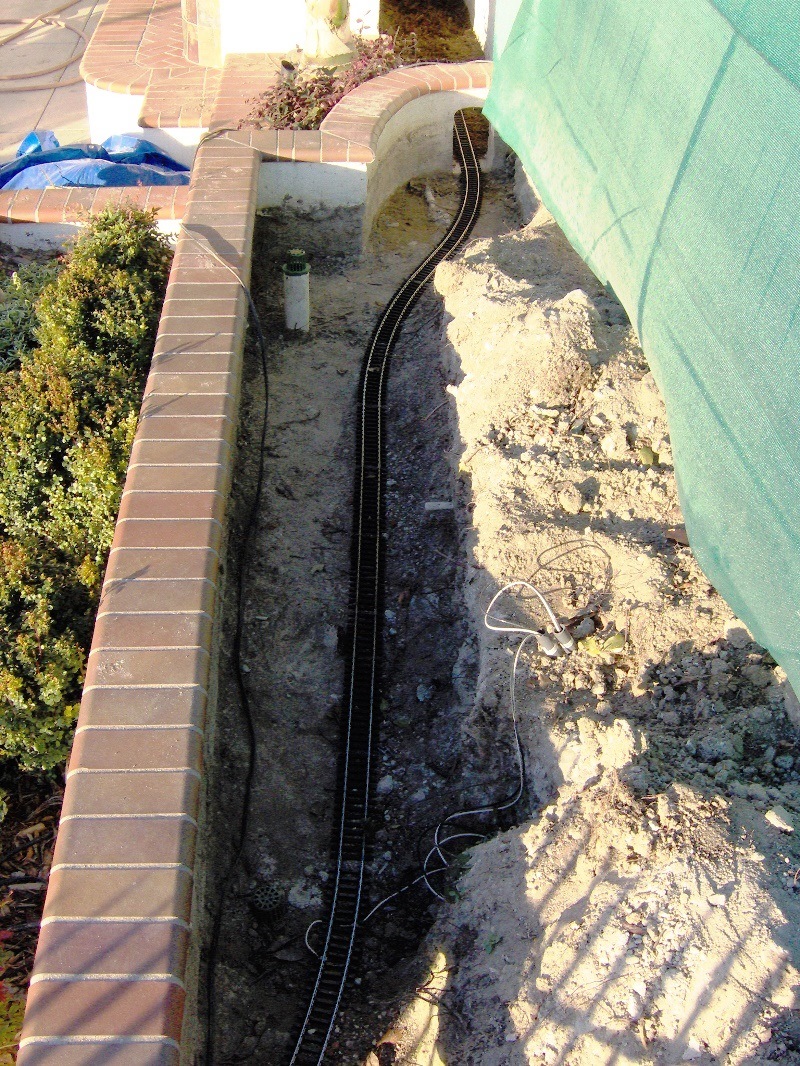 After the track exits the planter, it goes behind the fireplace and a large fountain, along the North side of the property, right next to the wall on the property line. 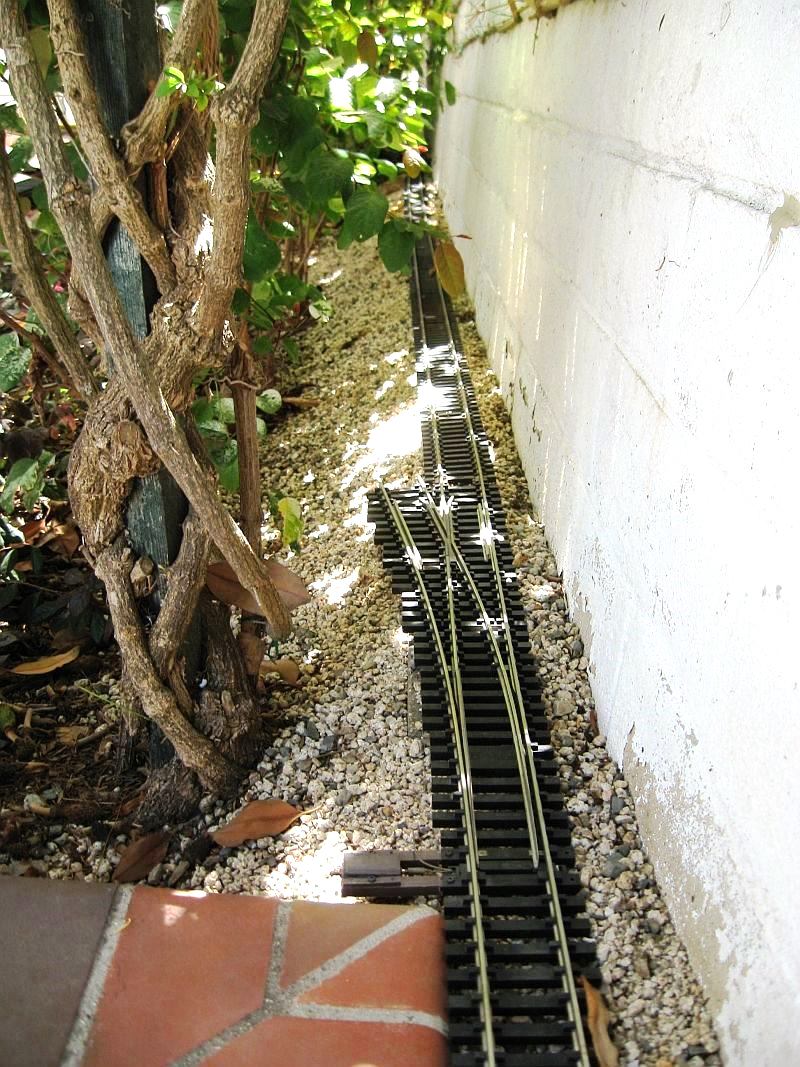 Originally the outer loop was to go out to the front yard, cross the driveway, and come back in the front of the house to join the switchyard.

I've put that expansion last in priority, since there will be some tough issues to solve, and I cannot leave the track down all the time in the front entry to the house. You can see the switch in the distance dead ending into the wall:

So, I had planned to construct a helix just west of the fireplace to get the track down to ground level, where it can then come back East near the house, and then back along the East end of the house to reconnect with the outer loop, near the entrance of the switch yard. (You can see the "Building a Helix" topic. Unfortunately, this helix would have been 4' radius, and 5% grade. After long consideration, it just seemed to be too much trouble.

Luckily for me, an "ace" track expert (1:1 scale) visited my house after the 2008 National Garden Railway convention. He took all of about 15 minutes to come up with a way to finish the outer loop.

The track makes a 180 turn at the end of the side yard and come back along the side of the house, dropping at a much better grade than the helix.

Here is a picture at the very West end of the side yard, where the track starts this 180 degree curve. The gate to the front yard is in the background. I have left the original track to allow future expansion to the front yard. This stub can function as a helper cutoff. 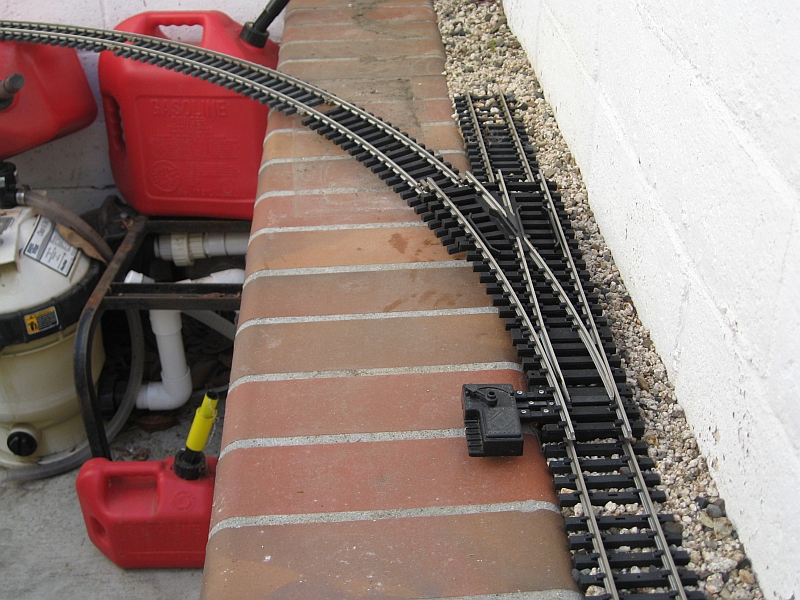 Here's a picture of the curve by the gate, going back towards the house. I was just checking the sanity of making all of this fit: 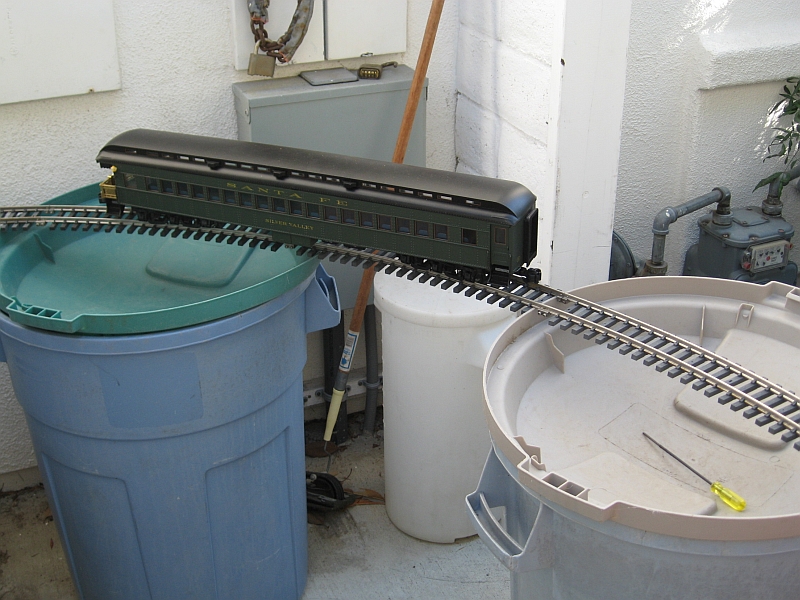 Well, there is a shed right next to the house. Looks like something has to move! 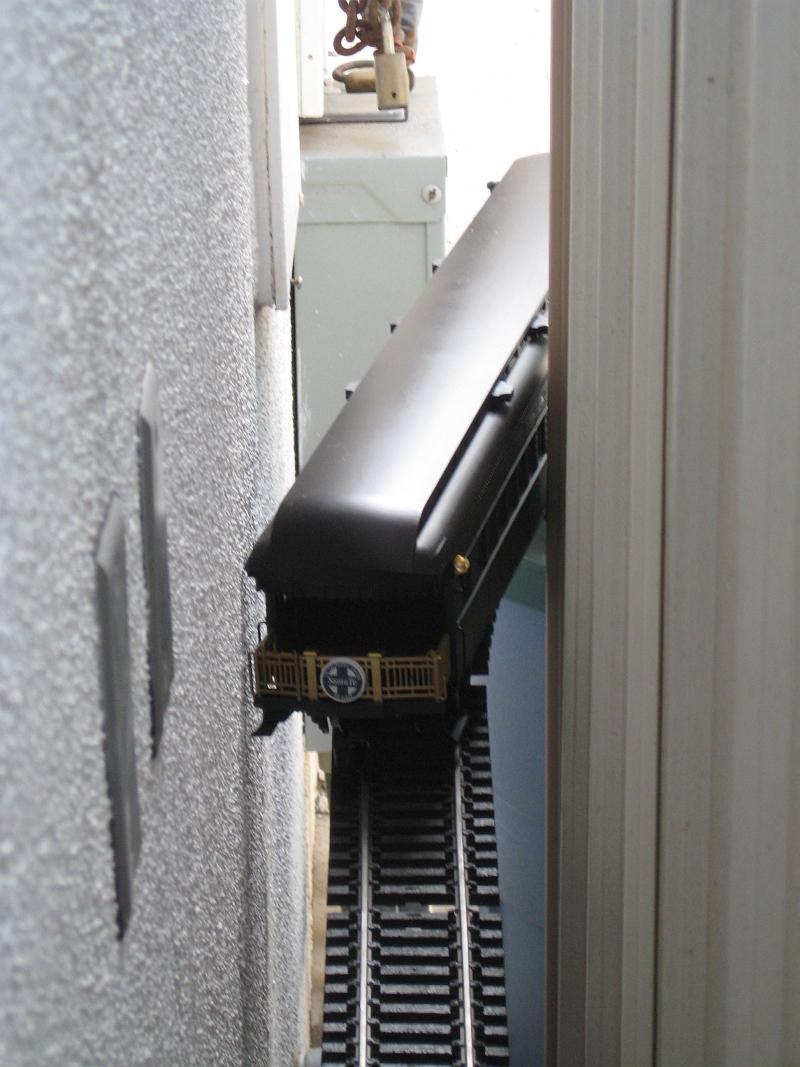 All right, move the shed away from the wall about another 4 inches, looks like things will fit now: 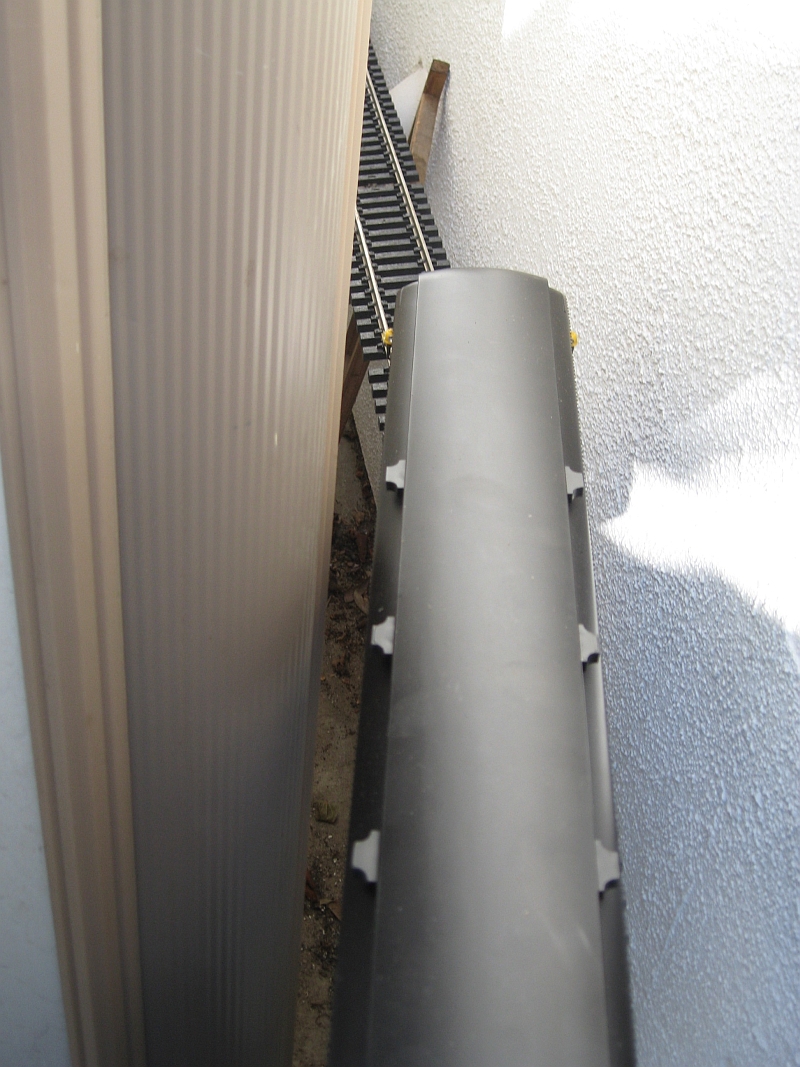 With some more solid supports, it works:

Now all that remains is to make the track supports to bring the track back along the house, and 2 lift out bridges, and 2 swing away bridges. Well, it's going to be a challenge. 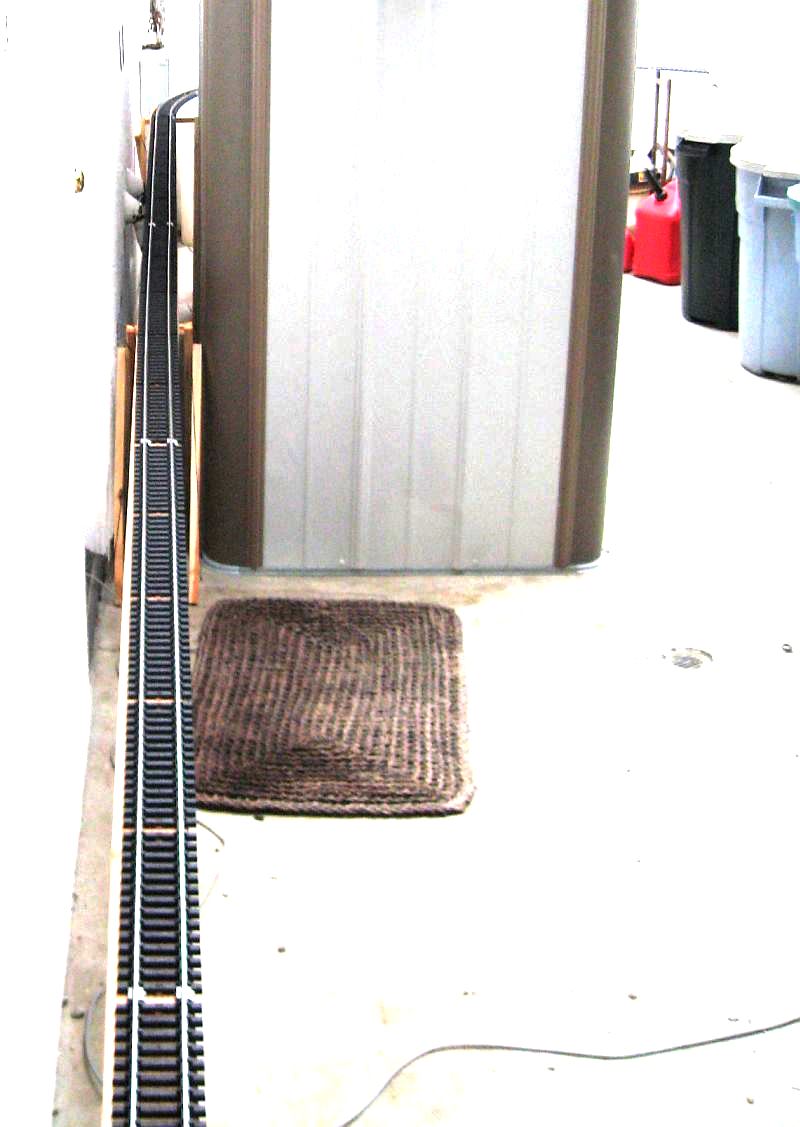 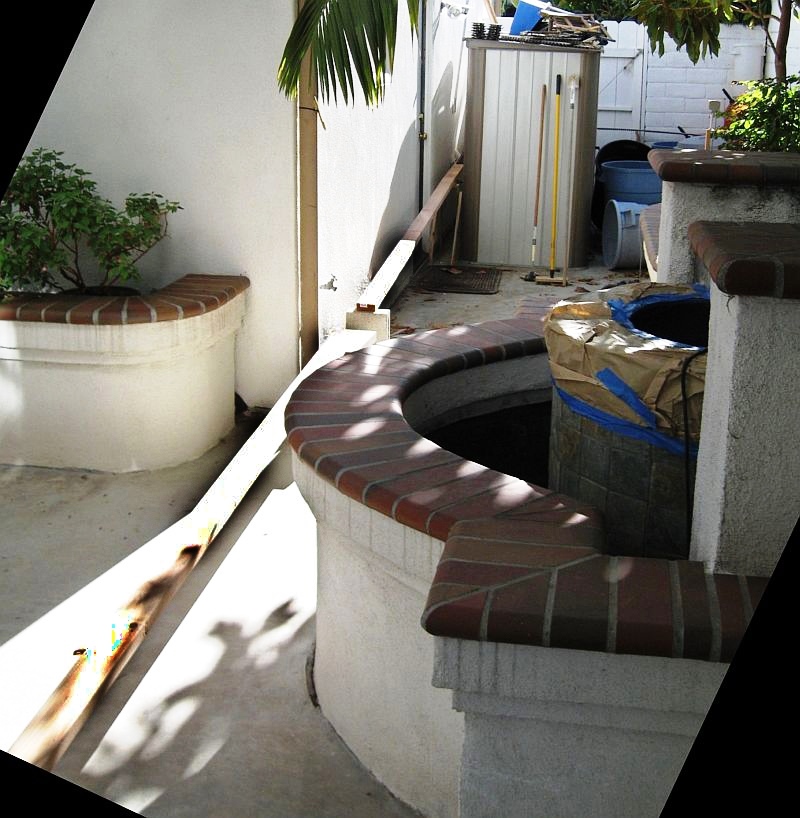 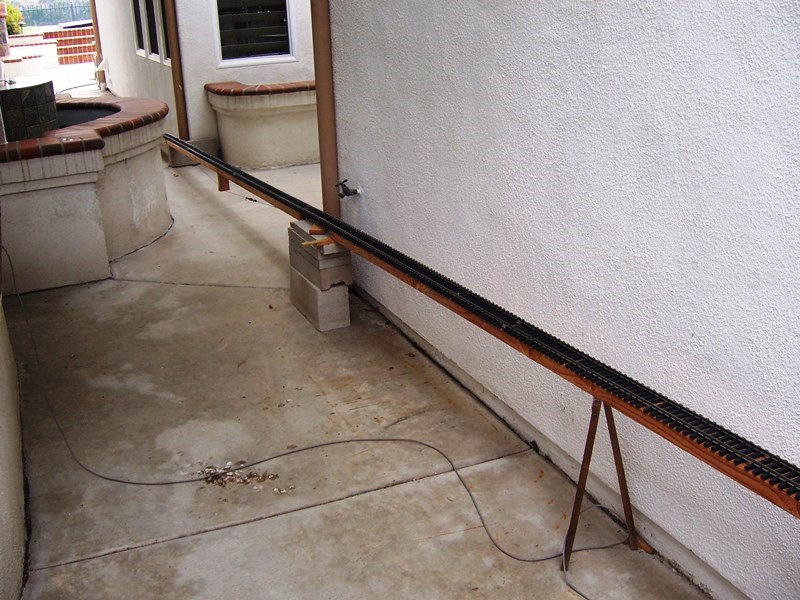 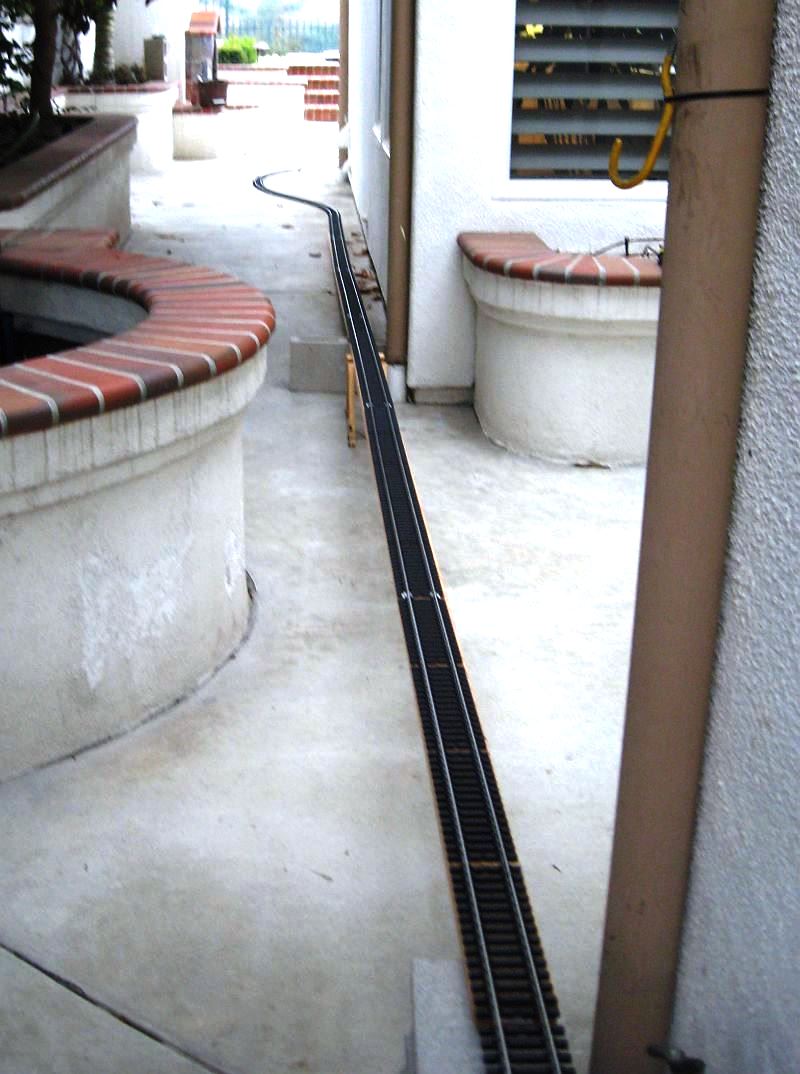 Now looking from the opposite direction, we are down on the ground!

And the track will continue along the back of the house to rejoin the inner loop and start over: 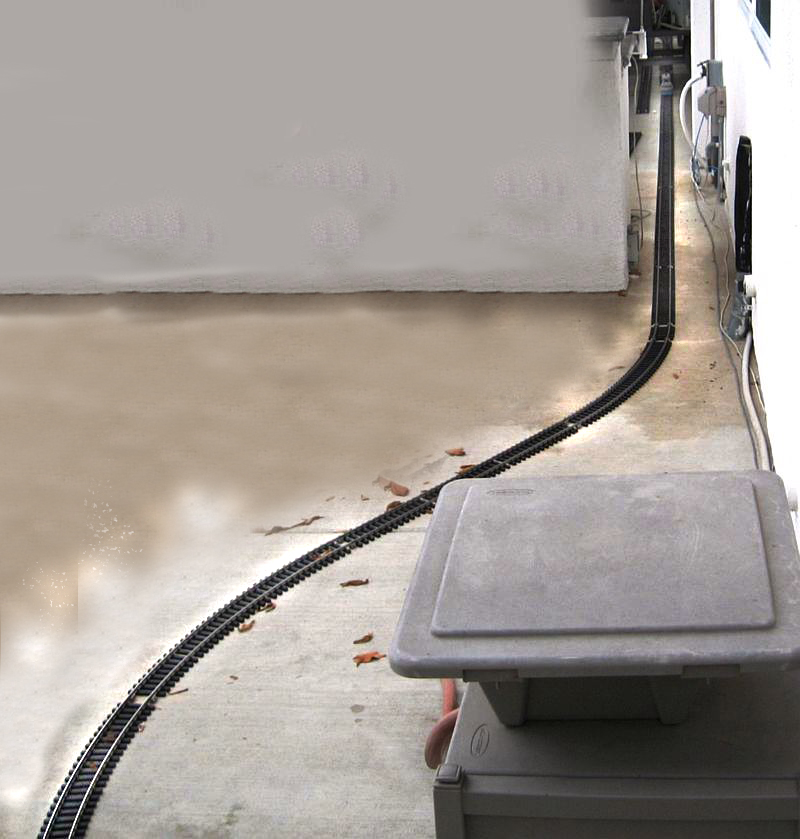