First, this loco has a lot of details, some of which are fragile. Also, it MUST have regular lubrication and maintenance.

Be sure to go through the video that was supplied as an owners manual:

Note: a big thank you to Dave Goodson for the help in compiling this page, and validating the information. Even the Bachmann forum has some of this wrong, and there is a fair amount of confusion.

There are sort of 3 generations of this loco, identifiable by the trucks alone, but there are additional feature differences:

there are lots of subtle differences not only between runs but in specific runs.

I believe each run was 5000 units (not really sure on the 3rd run). There were 16,000 ordered for the first run, and the production run was split into two. Later 6,000 of this run were cancelled. This gives you 2 runs of 5000 (first and second generations). There were a number of changes in the 2nd run that came in mid-stream, like incandescent headlights changed to LEDs.

These locos will negotiate 4 foot diameter curves. They will handle rough track, run nice and slow, and pull like the dickens. (i.e. they are like the real life shays).

Be sure to check out George Schreyer's site about this loco.

Many people have commented that the screws can be in VERY tightly. You need to be sure your Phillips screwdriver fits REALLY well into the screws. Any looseness at all, select another driver.

When you remove a Bachmann screw for the first time, have everything so it cannot shift, and support from the back side if possible. My tip on reassembly is to keep a small dish of armorall-like stuff, and dip the screws in it. It helps lubricate the threads, and the plasticizer in the stuff keeps the screw threads from wearing out. Also remember to rotate the screws backwards with a bit of pressure, the screw will "drop in" at the beginning of the already-cut threads. Follow these tips and you will not have stripped screw holes. Remember that with the screw lubricated, it will take less torque to make things tight. Do not overtighten screws in plastic!

All trucks have 8 screws total keeping things together.

The earliest version shows all 8 screws on the bottom plate, the 2 screws in the bottom center (between the wheels) plate are longer and hold the truck on.

In the newer version, where only 6 screws appear on the bottom plate, you need to remove the bottom plate to get to the 2 screws hidden underneath that hold the truck on.

The following procedure is courtesy TOC (The Old Curmudgeon a.k.a Dave Goodson)

Tank removal: remove the ladder if you have one, and remove the cover for the water fill and the screw that is inside. Gently lift the back while pushing the tank slightly forwards (towards the cab).  Excessive pressure will break off the two plastic tabs on the front of the tank. at makes it a 36 ton Shay and I assume that the removal will be similar for yours.

Rewiring for battery or DCC:

First, it's hard to accurately describe how to identify the wires as Bachmann has used the same colors for different purposes. Some are painted black.

For battery, you will basically remove the power pickup mechanisms from the wheels. For DCC, you need to isolate the motor from the track pickups.

Easiest way is to remove the ball bearings plungers that rub the backs of the drivers.

There are ball bearings that are basically self-ejecting when you pull the wheelsets straight up.

The flicker board has the wiring to the trucks, in the early versions, if you have removed the power pickup parts, then you now can use these wires to the motors.

Here's a picture from George Schreyer that shows the firebox/flicker PCB, you can see where the front and rear power pickups are:

See George's site for a nice mod to add a second set of contacts on each truck to separate track pickups and motors, if you have an early version:

Study the diagram of the tender wiring and identify the two pairs of wires that come from the corner of the firebox PCB and rear truck that are connected to the tender PCB at the four diodes.

Remove the two pairs of wires, one pair at a time from the Bachmann tender PCB, keep them joined together in pairs. These should be the motor wires.

The other two wires are the chuff timer. Identify the wires, remove them from the little PCB.

Between the firebox and the front of the rear truck is a plastic cover that conceals the wiring to the tender. Take out the two screws that secure this cover, remove the cover and save for re-installation later.

Note that the track pickups are connected to the motors at the trucks. For battery power, you can use the existing wires and remove the ball bearing power pickups.

Once you pull the bottom cover, you will see a brass buss bar on each side, parallel to the axles.
They connect the vertical buss inside the housing to the pickups, and at the other end of the pickups is a small 90-degree brass piece with motor leads soldered to said angle piece.

If you pull the small bridging buss bars, you have no more connection to the motors. This can be fixed by unsoldering motor leads from angle piece, and soldering to the vertical internal buss bars, then fully remove the pickups assemblies.
Now you have another problem, Sometimes, the vertical pieces are slightly "sprung", and will flex inward and touch the metal motor housing, causing a short circuit.
This can be repaired by cutting appropriate thickness small strips of styrene, and jamming them between the motor housing and the vertical buss bars.

Place the loco upside down in the top half of the packaging.
Follow the Bachmann instructions for removing the underneath plate of the REAR truck so you can properly lubricate the mechanism. Be very careful doing this!!! Often the screws have been driven in very tightly and may have cracked the screw holes. Use the heaviest screwdriver that will fit and apply careful pressure.

If the truck frames are cracked you will need to rectify this BEFORE proceeding any further.

There is no need to remove the truck from the chassis. Replacement can be very difficult.

Next, you will isolate the motors from the track.
Study the exploded diagrams on page 23 of the Bachmann instructions.
You must remove the ball bearing pick ups in the trucks to isolate the loco from the track.
Remove each axle and wheel set. Be prepared to catch the ball bearings as they spring out or you will lose them. Make sure the wheels are securely mounted on the axles. It has been our experience the plastic spacing washer between the ball bearing and the wheel is likely to be cracked and may need replacing.

Once the ball bearings have been removed replace the rear truck wheel sets and cover plate.
Repeat the procedure for the front truck.

There are 2 versions of rear light.
Early version with incandescent bulbs. The White wire is the common traction voltage +. Connect it to the
one side of the tender light bulb. Connect the Black return wire to the other side of the tender light bulb.
Splice in extra Red/Yellow wires that are long enough to reach the firebox. Feed them down through the new
hole in the floor. Identify these wires as to what they are to save confusion later. Insulate all joints.

Later version with LED lights. You must place a 330 ohm ½ watt resistor in the Blue + circuits to drop the
traction voltage to a safe level for the LED.

The firebox flicker unit and the smoke unit will also have to be isolated from the track and re-powered.

There are also 2 versions of front headlight.
Early version with incandescent bulbs. Connect the Yellow return wire to one side of the front headlight
bulb. Connect the Red + light wire to the other side of the headlight.
Later version with diode lights. You must place a 330 ohm ½ watt resistor in the + circuit to drop traction
voltage to a safe level for the LED. LEDs are polarity sensitive so connect Red to Red. 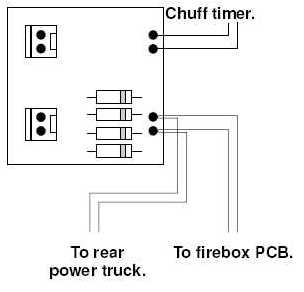 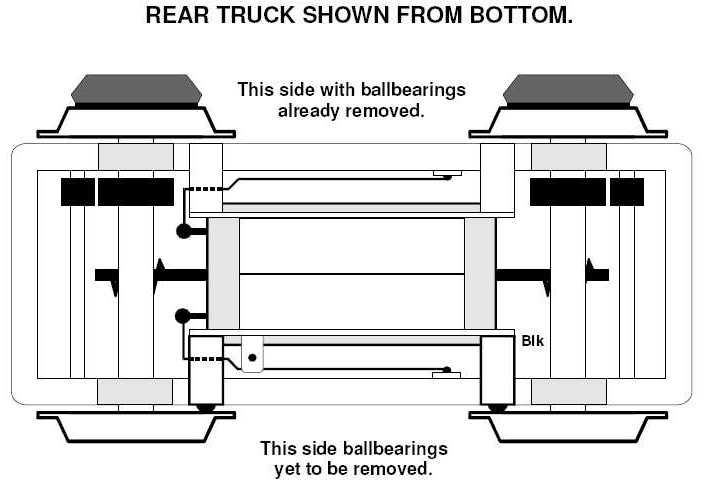 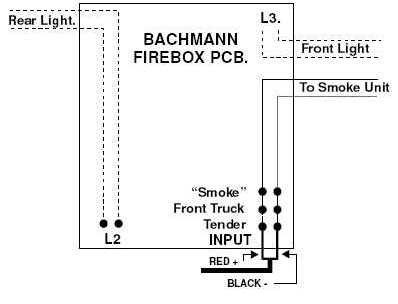 The 8 screws on the underside just attach the cover plate itself. Two of these screws are long that connect to the top plate.

The top plate can be removed from the chassis using the single philips screw, and you will see the brass contacts that transmit the power.

Note: the original trucks were designed to be able to run by themselves, i.e. self contained. This means hardwiring the track pickups to the motor in each truck. The newer trucks keep this wiring separate in the truck, to allow DCC operation.

Note that the 6 screw trucks also have 2 long screws, but they are inside the truck. Looking down inside the truck you will see two screws, one at each end of the truck, slightly offset from center. Removing these will allow pulling the truck away from the top plate.

"Because these two long screws were then actually too long (because they didn't also go through the "base" plate), Bachmann simply cut off the excess thread after assembly. Sometimes the cut wasn't clean and the end of the thread on the long screws got bent such that when the long screws were removed, the bent part destroyed the moulded plastic into which they had been screwed."

Tip from "TOC": "circuit board shorted to trucks"

"I just did a rebuild on an OLD Shay. The original 8-screw trucks are in pieces.

Had the guy order out a set of metal trucks from TrainWorld ($199 plus shipping!).

Got all done, found the frame was "hot".

Nothing I did, as everything is mounted to plastic...so I went digging.

The pivot mount with the 4 fingers on the rear truck....removed the pivot bolt, ohmmeter showed continuity to the metal pivot assembly.

Pulled the contactor circuit board, and apparently the reliefs in the metal pivot don't quite clear the solder bosses on the back of the circuit board.

Couple of narrow strips of black electrical tape and screwed it back together.."hot" frame issue is gone.

Go figure. Might be worth checking before you install the set in your older Shay." 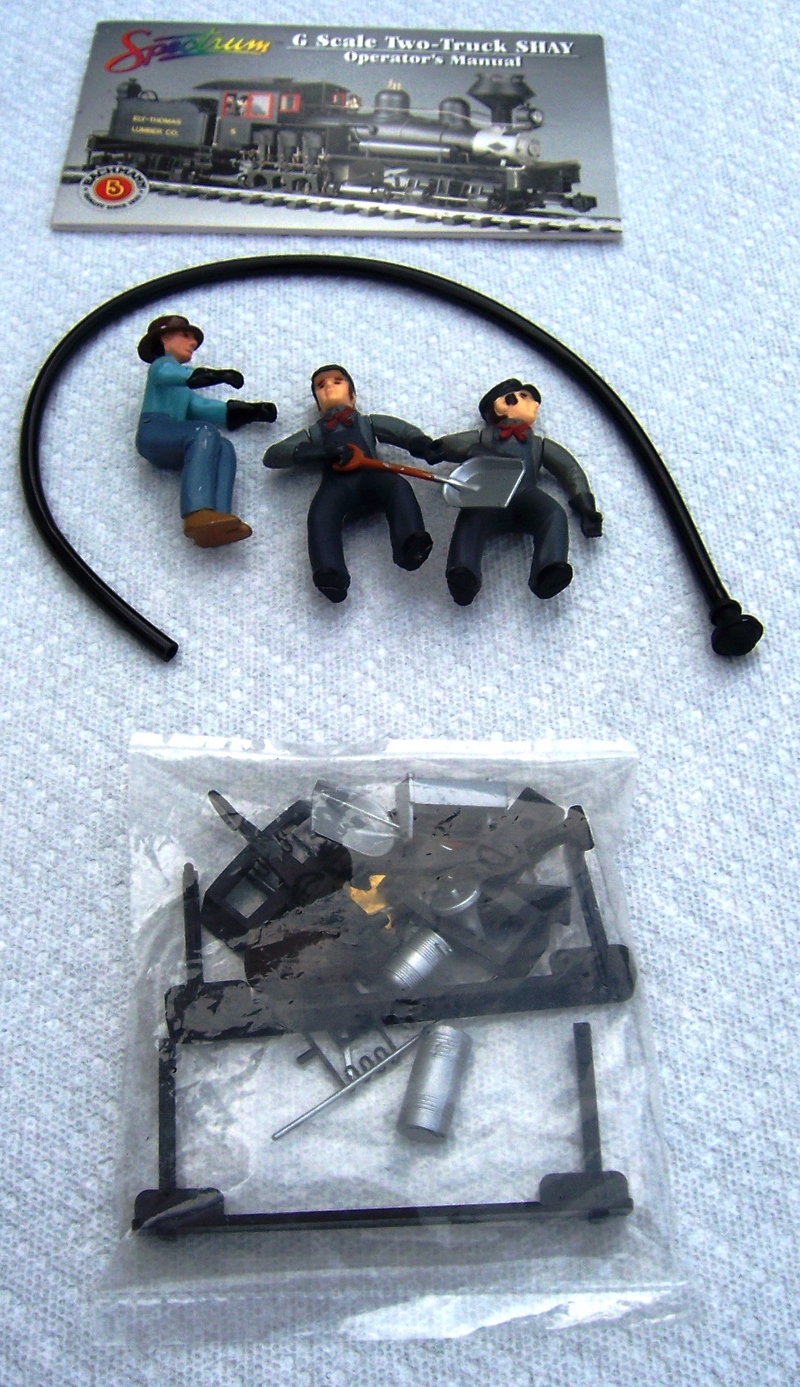