There are several types:

This is a long thin unit, heater only, used in the FA-1, it needs an external fan. Used in the original units. Newer units have the "prime mover" fan.

This is somewhat square, used with an external fan.

I noticed one of the pictures that RJ sent to me shows the PMSU housing having the embossed patent number, US D469,132S, on it.

Since the first SD45s were suppose to include this new smoke unit, I would expect they were labeled with "patent pending" as was done with the 3 axle motor blocks. This smoke unit patent was filed on Feb.9, 2001 and as such Aristo's China factory had to have been making the new SD45s prior to June 2001. Remember, too, it takes about 30 days via slow boat from China to get products to NJ. The value of all this is that the very first PMSUs may have had changes to it compared to RJ's version having the patent number embossed on it.

If Phil thinks he has an early SD45 and is willing to examine its smoke unit, including taking it apart - a comparison of it vs. the newer one can offer some more insights into its evolution (aka problem fixes).

This is an interesting facet of Aristo motive power (and there are some smoke units that are not in locos).

Basically, there are a number of different types, and there are some problems with the latest and greatest units. There's even issues with getting the NAMES and descriptions of the units straight!

So, I'm going to try to document these units. The names I give them may not be "official". 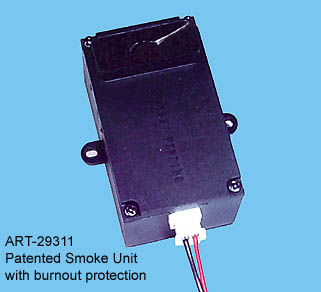 This unit was first seen in the SD45, which came out about 2001 I believe. It is in most of the newer locomotives, and also has been put in older locos, like the FA, which have been updated.

This is the "top of the line" Aristo smoke unit as of October 2008.

The unit has a heating element to vaporize the smoke fluid (a type of oil) and a fan to help create more smoke.

These units have a poor track record out of the box, but many people do not know this since not everyone uses the smoke. For those who do, I estimate it's about 50% that work correctly. More on this later.

The smoke unit is housed in a box that serves as a fluid reservoir and housing for the fan and electronics. The picture below shows the fluid chamber on the right, and the fan/electronics housing on the left. Notice the "wall" between the 2 chambers. Hard to see, but there are 2 small notches in this wall where the wall meets the housing sides. I believe these are for protection against overfilling. The "wall" does not come to the top of the box, so this is where the air flows, from the round opening through the fan, across the top of the wall and into the fluid chamber where the heating element is, and out the top.

This is a large (for Aristo) fluid chamber, about 4 ml. The circuit board goes face down into this housing, and is covered with a lid. Here is the top of the lid, with the latest version, i.e. the patent number: (notice the large "funnel" opening to make sure the fluid gets into the unit) The earliest units apparently were manufactured before the patent was approved: Here is the underside of the lid. Notice the raised "ring" which goes into the hole in the circuit board, more insurance that the fluid gets into the fluid chamber, not all over the board: So, one to the  guts of the unit. Here is the top view, you can see the hole on the right where the smoke comes out. You can also see the heating element through the hole. It is a wire-wound resistor with a Fiberglas wick around it. The wick absorbs fluid by capillary action, and the heating element vaporizes the smoke fluid. The brown color on the wick is normal, you just don't want to see crud accumulated. As long as you can see the wick "weaving" you are ok: 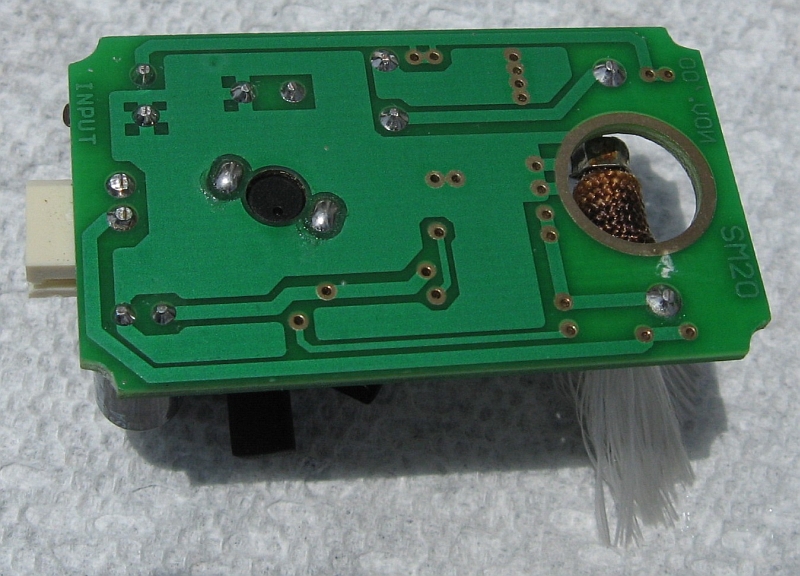 Notice the "NOV 00" on the upper right corner of the board, the date the board layout  was designed, thus making sense that the first ones arrived in 2001. (This is not a unit date code, circuit board designers put the date they "lay out" the board on the art work.)

You can see the white power plug on the left hand end.

Let's look a the the underside of the board. Note that this is upside down from the normal orientation, i.e. the wick and fan are pointing down when installed: You can see the unit. On the left hand side is the heating element with the wick wrapped around it. Notice the metal cap on the end, and the irregular crimping? More later.

The 4 black items (you can see only three here) are diodes to allow the unit to work in any polarity of input voltage, or even AC.

In the middle you can see some small surface mount components, and 2 integrated circuits. You can also see the fan motor, fan blade, and the cylindrical electrolytic capacitors.

Notice there is no barrier on the board between where the smoke is generated, and the rest of the electronics, importantly the electrolytic capacitors.

Here's a side view of the wick: Notice the metal band clamping the wick to the heating element?

For the number of units ACTUALLY used, many do not operate properly out of the box. Many people report that these shut themselves off after only 5 minutes or less. Also, you have to disconnect power to restart them, they do not automatically reset. There are some reported cases that running these units on PWM (Pulse Width Modulation) power (like Aristo's PWC system) allows them to reset.

Aristo has never specified how long they should run, and also has recently specified less fluid (drops) in one loco over another, even though the two locos have identical units. It seems that most working units will give 20-30 minutes on a full reservoir.

The way the units work is (apparently):

The unit will operate on track voltage or even AC. The 4 diodes around the heating element rectify AC and/or "set" the DC polarity to power the circuitry.

The microprocessor monitors the voltage on the heating element (resistor) and determines when to shut off, sensing a condition that is interpreted as out of fluid.  This is the "burnout" protection.

If the "out of fluid" condition is detected, the unit shuts off and stays off until power is interrupted and restored. (Microprocessor reset)

Analysis of problems and solutions:

Note: when filling, you cannot "equate" drops with a specific amount of fluid. Different fluids and different spouts will give you different number of drops per milliliter. MEASURE the fluid with a syringe. To fill this up to where it does not spill out the overflow slots, use  4 milliliters. You can use 4.5 milliliters if it is bone dry, and you do not tilt the unit, but you are right at the "overflow" point. (This is where you see the two notches in the wall between the fluid chamber and the electronics in the above pictures)

The first problem is erratic operation, does not run long enough. More on this later.

Another big problem is that since Aristo smoke fluid is a solvent (good thing), it splashes around or condenses in the unit (bad thing). Due to the design, it gets on the circuit board. Get fluid on the board, and the electrolytic capacitors pop right off the board, the rubber plugs that seal the ends of the caps absorb the fluid and expand. It does not help that Aristo did not space the caps away from the board to anticipate this.

When this happens, often the circuit board is damaged, and also there is often some residue on the capacitor leads.

The fix for this is normally to remove the capacitor completely, trim back some of the expanded rubber, and re-solder. The re-soldering can be tricky, i.e. to bridge the damaged copper traces, and to get good solder joint quality on the leads. I have seen some factory repairs poorly done.

The big problem, and harder to understand and fix is the heating unit. It is a wire-wound resistor. From all the ones I have measured the nominal resistance is 5 ohms. Many are exactly 5 ohms. The basic construction is the winding of a nichrome wire in a loose spiral on an insulating core.

Then, 2 caps with leads in them are CRIMPED on the ends. CRIMPED, not soldered or welded. If you research this component, the manufacturers STRESS that any force exerted on the caps by bending the leads CANNOT be transmitted to the caps. You must hold the lead next to the cap and then bend the lead to AVOID stressing this CRIMPED connection.

Why all the CAPS?

Because, you can easily see that there is no way the lead was held before being bent, there is just no room where a pair of needle nose pliers could have been. The manufacturer of this component warns that this will cause problems.

My guess is therein lies the basic problem: A microprocessor that can only sense the voltage across a resistor to know when to shut down, and the resistor has an erratic resistance, thus the system fails to operate properly.

Another observation I have made from reading all the posts about fluid on the circuit boards and swelling radial electrolytic caps is that there are probably 2 possibilities: filling the smoke reservoir without a syringe, spilling it about, and smoke fluid vapor condensing inside the unit itself.

I have taken a brand new unit, held it in a vise, run it, removed the lid and circuit board and found fluid condensed in the fan chamber. By not having any barrier between the smoke chamber and the rest of the electronics, the fluid can condense on one end of the board, and wick over to the other end.

One user reports: the fan starts to rotate at 7.0 - 7.5V. Also just pouring fluid in soaks everything, the P.C.B. and inside of the locomotive. There is no seal between the smoke unit itself and the top [roof] plate. The power to the smoke unit is taken directly from the track.A full wave bridge circuit located on the P.C.B. allows for AC or DC voltage to be applied. The voltage across the heating element measures approximately 6.0V with a track voltage of 8.0V and above applied. The total current measured 0.54A at 7V [Voltage at the point the fan started to rotate.] As the track voltage was increased the current dropped to approx. 0.3A at 16V DC. As can be expected the current dropped as the resistance changed. The heating element measured 5.0 ohms when cold. The voltage across the fan measured 1.6V with an input of 7.0V. This increased to 2.2V from 8 - 16 volts.

I am currently getting all the "bad" units I can and finding out what it takes to get them running again. I will report back the results.

So far, I have found defective repairs to "expanded capacitors" several times.

This unit simply unplugs from the top of the loco. No fan. I do not know what circuitry is in it. The RS-3 pressurizes the fan chamber like the old style FA-1, but there is no goofy reversing switch. 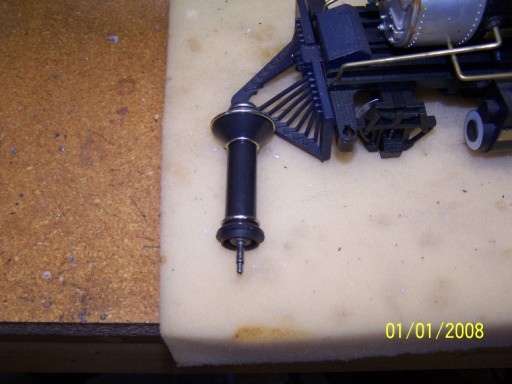 This unit has a switch to allow forward or reverse fan direction, and there is a center position (which is a bit hard to find) for off. These are the large fans visable on the top of the loco.

Now why anyone would want to suck smoke back into the unit is beyond me, but having this switch in the wrong position is often done by new users.

Apparently the new style (since when?) have a all-in one smoke unit, like the SD-45 type. The roof fans are no longer powered.