I use Aristo track at this time, the stainless steel stuff. They were one of the main suppliers of track in the hobby, I have a separate section on their products. Aristo is no more.

Aristo products were designed to be low cost, and this track is no exception. Realize that Aristo (or REA to be exact) copied LGB track years ago (that prompted LGB to sue them), and with low cost comes shortcuts, so the following sections will be concentrating on fixing or improving the track and switches to make up for the shortcuts in quality and manufacture.

I used Aristo track exclusively because even with the negatives, it was the most cost effective stainless steel track at the time. When I started the only other SS track was imported by H&R trains, beautiful stuff, but twice the cost of Aristo. Today, there are other SS alternatives, especially in code 250. AML has made SS available in 2014. Aristo brass track used to be very cost competitive, but today, there's many alternatives. Scott Polk, of Polks GeneratioNext (nephew of Aristo owner Lewis Polk) started importing track in late 2015, but he went bust too.

Basically, inexpensive track, in lots of sizes. The stainless is good enough quality, and the price was 1/2 the alternative when I started.

In 2017, no longer manufactured, so a little hard to find NOS (New Old Stock). Like all Aristo products, there are things to do to overcome assembly and other product quality issues. This page goes on to list some of the common issues.

What to read next:

Read the rest of this page for common problems first!

There are also 10 sub pages on Aristo track and switches.

You can get to these pages with the links below or the normal menu system:

The "spikes" on the ties are not a tight fit to the rail, see the pictures below of a piece of sectional track, in the left foreground, see how the "spike" does not even TOUCH the rail? Now the other side is touching, but you see that the rail is not "centered" where is should be: Those are huge gaps between the rail and the ties. So what holds the rails in gauge (ha!) is the screws underneath,this is important to realize, and it's true for both track and switches. These screws are only about every 7 ties or so. Notice that even the hole the the screw fits into is oversize and elongated?

Important note: the "flex track" has NO screws to hold it in place.

At this point, it does not take a rocket scientist to figure out that the tie strips do nothing to hold track gauge. Worse yet, the "take out all the screws so the rails can slide in the heat and cold" squad (WRONG!!) really make it so the rail gauge can go all over the place.

The bottom line is sectional track will often be out of gauge, usually tight, and there's not a lot you can do about it. Also, when foolish people remove the screws, then the gauge often goes really wide, and for even more fun, a heavy loco will often spread the rails enough to derail, or the rail actually rolls over. Lastly, if the rail has a lengthwise twist, it will make itself evident.

Thus, you will see that very few live steam runners use Aristo track.

Now after all that, I've had good luck with my track, but all the screws are in, and any custom bending was done with a good bender that did not twist the rails.

It's really easy to brush a tie and pull it away from the rail. Getting it back in place without tearing the "head" off the "spike" is difficult, it really helps to have two people.

Try 2 flat blade screwdrivers to bend up the "spikes" to clear the rails, but be sure to hit older track with some armorall to keep them from breaking off, if the plastic is brittle it will crack off.

One common problem is corrosion. Jumpers in switches are usually small diameter wires screwed to the underside of the rail. There's a number of dissimilar metals involved and no weatherproofing.

All of the wiring in my switches eventually has self-destructed.

The #6 switch uses a non-waterproof microswitch to power the frog. The actuation mechanism is non-adjustable and just sort of overall lousy. All the this wiring has likewise self-destructed: (this is the early style switch, the newer ones have the switch under a larger area of plastic, I'll get a picture) 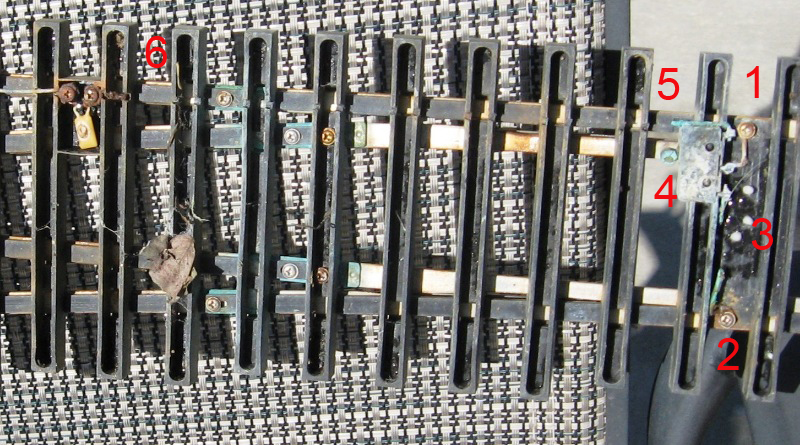 Unfortunately, after (I guess) 10 years of manufacture, the throtwbars on Aristo switches are still made of a plastic different from the ties, and it is NOT UV resistant (per Lewis Polk). Depending on the exposure to the sun, and if you use different switch machines, the thin end of the throwbar will crack or just rot off.

I recommend trying an Armorall type UV protectant to help lengthen the life of these. Aristo promised to replace these free if requested, and I have taken them up on the offer several times while they were in business: 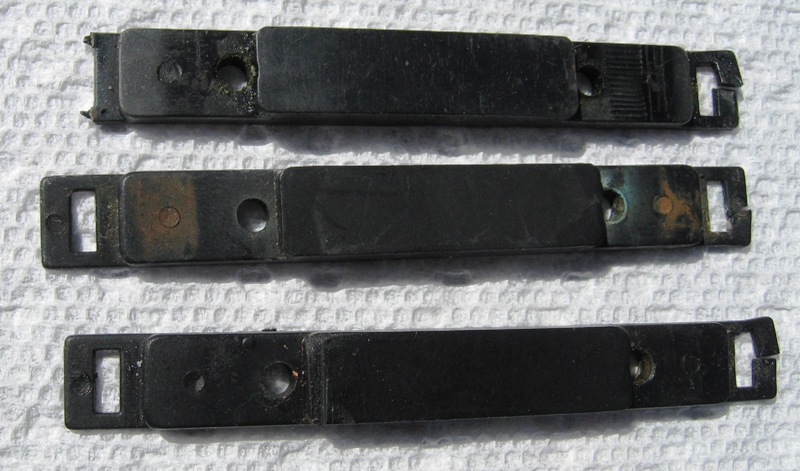 A nice idea to recover from the broken ends from Noel Wilson. Drill a couple of holes in the throwbar, and run a wire through it to connect the switch motor. 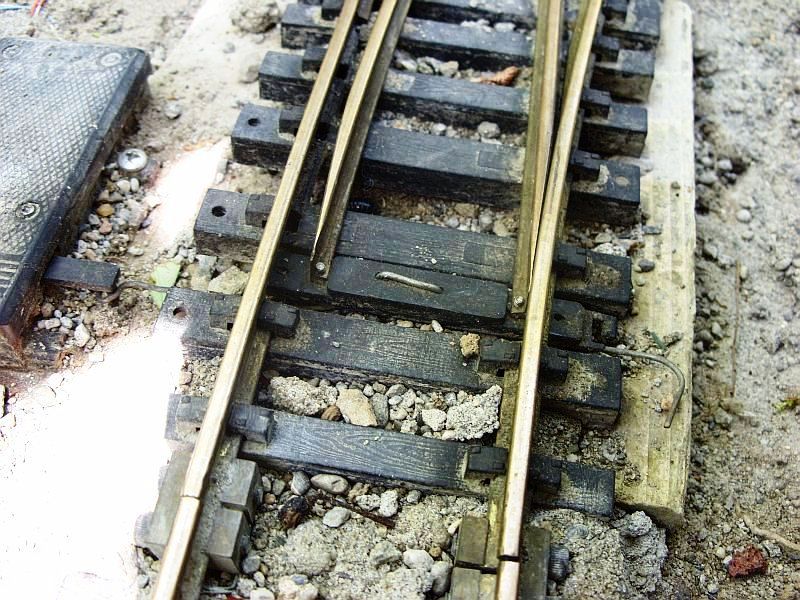 Another alternative is GLX Scale Models makes a set of replacement throw bars. I replaced several broken Aristo one and I can recommend them "initially". I need to see how they weather, but the quality is good. GLX Scale Models, Gilbert LaCroix, www.glxscalemodels.com 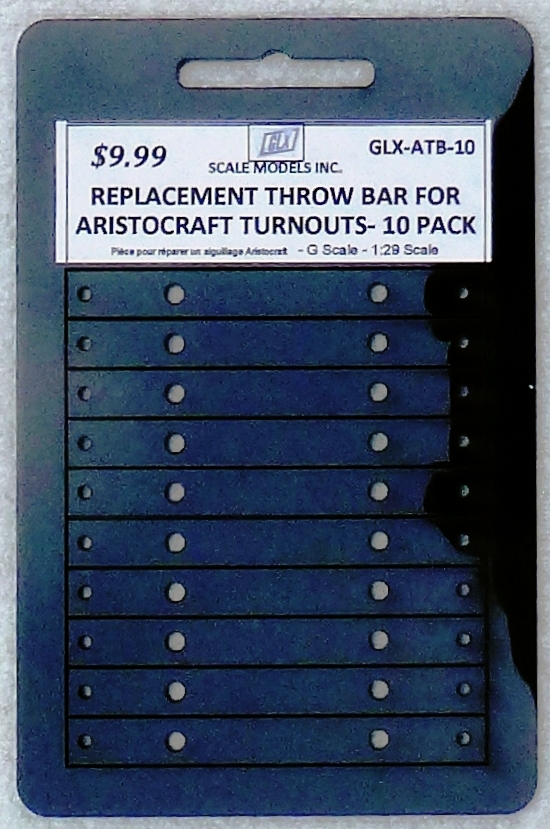 Many switches are tight gauge just past the points. If it's right near the points you can grind away a bit of the stock rail to allow the points to move "further" thus increasing the gauge.

The way the point rails are secured allows needs attention. The ends furthest from the points swivel and are held in place with a screw with a spring underneath. This is flexible, but too flexible, and does nthing to keep the rail upright.

The point ends are not secured directly to the throwbar, but screwed to a bushing that rides in the throwbar. If this screw is even a bit loose, the point rails will be "floppy" and can actually roll over under a loco and the gauge can change, usually spreading the rails and the loco can drop down in between the rails.

These screws are only accessable from underneath and many people ignore them. The screws should be loctited into the rails (blue loctite please), but the bushing needs to turn a bit in the throwbar. The pictures below (courtesy Todd Haskins) show the throwbar in place first. Notice that these screws have a large head on them.

With the throwbar removed, you can see the threaded holes in the points. You see unoxidized circular areas around the holes where the bushings contact the rails. And here is the most important part, showing the bushings and the screws. Tightening the screw locks it to the bushing and the point rail.

The bushing rides in the throwbar and allows a bit of movement of the point rails as the switch is thrown. The bushing is taller than the thickness of the throwbar, so you can (must) tighten the screw down tight and put a bit of loctite on it so it won't loosen, but ONLY a drop of loctite from the top, otherwise you might lock the bushing to the throwbar, which should have a bit of grease or heavy oil on it.

To be clear, the head of the screw tightens on the bushing, not the throwbar, and the bushing is a bit thicker than the throwbar, so this screw can secure the point rail tightly but the bushing can turn in the throw bar a bit, so as not to bind as the switch is thrown.

The quality of these is poor, you need to do some grinding and matching of ends, I've encountered 1/4" gaps in the rails stock.

Here is a nice page with exact sizes of Aristo track: http://members.westnet.com.au/susprog/AristoTrack.htm note that the LGB track sizes are not quite exact here. Nice list of the real radii/diameters of Aristo track. In general it's pretty close to the advertised specifications..